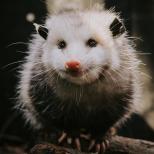 Violet was found in the fall of 2020 with injuries to her toes and tail and was taken to a permitted wildlife rehabilitator in southwest Virginia. The injuries were not life-threatening, though Violet was friendlier than expected for an opossum her age, raising some questions about what had happened prior to her rescue. While the young opossum's injuries healed, her missing digits and amputated tail would limit her climbing abilities. Center outreach staff began working with Violet in the fall of 2020, and she officially joined the outreach ambassador team in late December 2020. 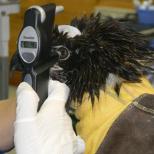 NX, a juvenile Bald Eagle rescued from her nest at the Norfolk Botanical Garden earlier this year and treated and released by the Wildlife Center, was admitted to permitted wildlife rehabilitator Diana O'Connor of Wildbunch Wildlife Refuge in the Northern Neck on December 1. 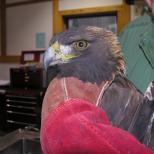 On Tuesday, January 11, the Wildlife Center received its first eagle patient of the year -- a Golden Eagle from Craig County, Virginia. The eagle was found with its toe caught in a foothold trap and was rescued by Conservation Police Officer J.W. Koloda on January 9. Officer Koloda brought the bird to permitted wildlife rehabilitator Gwenn Johnston, who brought the eagle to the Wildlife Center the following day. 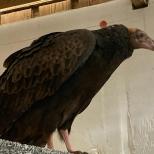 On September 12, a private citizen found a young Turkey Vulture stuck in a large mud pit near a construction site in Charlottesville. The citizen contacted some friends and family, who quickly gathered resources to rescue the vulture and met her at the site. Working together, they placed boards down to form a safe path over the mud. After an hour of difficult progress, they were finally able to reach the vulture and free it from the mud. They bathed it to remove the mud and brought it to the Wildlife Center later that day.

On August 19, 2017, a hatch-year male Bald Eagle was released at Mason Neck State Park in Fairfax County, Virginia. The eagle was rescued in Alexandria in May 2017. 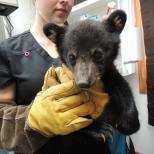 On May 2, the wildlife veterinarian with the Virginia Department of Game & Inland Fisheries delivered two Black Bear cubs to the Wildlife Center. One cub, #17-0744, was a male cub found walking down the side of the road in Wythe County, Virginia. 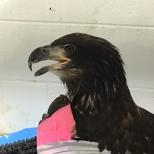 On June 4, a young Bald Eagle was found down on the ground near an active eagle nest in Midlothian, Virginia. The bird was unable to fly and was captured and taken to a local permitted wildlife rehabilitator, who found a fracture in the eagle’s left wing. The eagle was transported to the Wildlife Center the following day.

On January 1, 2012, an adult Red-tailed Hawk was rescued from a barn in Page County, Virginia.  When the hawk, patient #12-003, was admitted to the Wildlife Center on January 2, it displayed symptoms of lead poisoning. 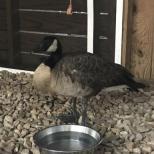 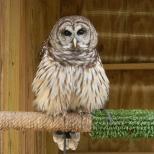 Gus came to the Wildlife Center in April 1994 as a very young owlet. Shortly after hatching, she was found alone and on the ground near Mechanicsville, Virginia, presumably after falling from her nest tree. Her rescuers brought her to their home, intending to keep the young owl as a pet; like many people, they were unaware that it is illegal to keep wild animals in captivity. After several weeks, Gus was discovered by neighbors and removed from the household by the local police, who arranged for transport to the Wildlife Center.