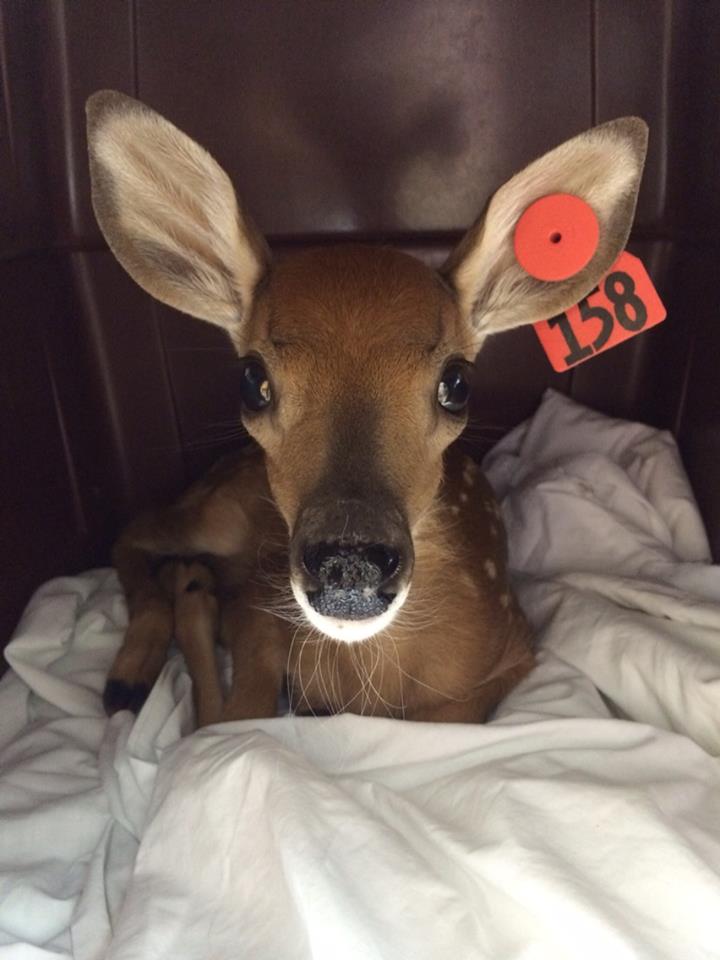 The Wildlife Center is currently caring for 11 White-tailed Deer fawns. The first fawn of 2014 was admitted on May 24 – historically, this is around the time that “fawn season” begins at the Center each year.

Several of these 2014 fawns were healthy orphans, one was attacked by a dog, and a few were simply “fawn-napped”– that is, they were picked up by a well-intentioned citizen who believed the fawn to be orphaned. Fawns are often the victims of this sort of well-meaning “rescue”, due to the fact that they are typically by themselves during the day while their mothers are feeding quietly nearby.

This year, the Center has cared for a number of fawns that are unusually small and unhealthy. The past fall and winter yielded a poor hard mast crop, meaning that the animals who rely on tree nuts for their primary food source in the cold weather had a more difficult time meeting their nutritional and caloric requirements. According to the Virginia Department of Game and Inland Fisheries, acorns are a preferred food for a number of wild animals, including White-tailed Deer, Black Bears, and squirrels. Acorns are rich in fat and soluble carbohydrates which are important nutritional elements that contribute to “the animal's body condition, survival, harvest rates, reproduction and, eventually, population status.”

It’s possible that deer who reproduced this year had less energy to dedicate to reproduction, resulting in smaller, weaker fawns in the spring and summer.

While a herd of 11 fawns is smaller-than-average for the Wildlife Center, fawns are one of the most high-maintenance species that are rehabilitated; the level of effort increases when fawns are unhealthy and the staff need to administer medication or perform more frequent examinations. The 11 fawns currently being treated at the Center have had a number of health issues, including persistent coughs, diarrhea, and parasites.

Fawns spend an average of three to four months at the Wildlife Center. For the first two months, they are bottle-fed twice a day by the rehabilitation staff and students – a time consuming task. Each fawn feeding session lasts approximately 10 to 15 minutes. When multiplied by two for each of the 11 deer, bottle-feeding can easily take up several hours of the day! 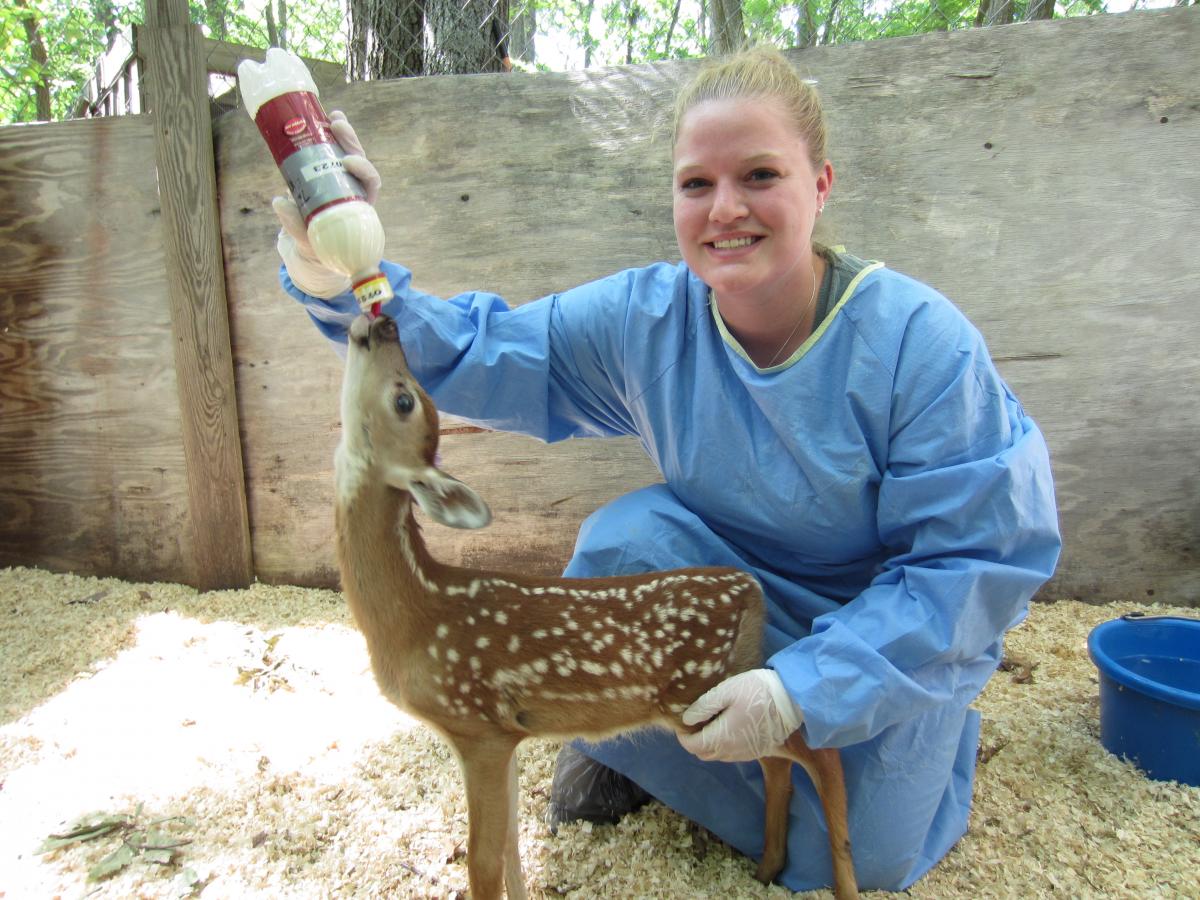 After a fawn gets used to bottle-feeding, it is transitioned to “rack-training” to minimize contact with people. Rack-training means the staff and students no longer need to hold the formula bottles for the fawns – the young deer can access their bottles on a rack in their enclosures.

Some well-intentioned rescuers give a fawn milk to curb its hunger. However, this is not the proper formula for a fawn and it can cause severe digestive issues, and can even result in the death of the fawn. The rehabilitation staff must order a special fawn milk replacer formula, since fawns have very sensitive digestive tracts and require a special diet formulated just for them.

As the fawns mature, the rehabilitation staff and students begin introducing "browse" into the fawns’ diets – the students go into the woods surrounding the Wildlife Center twice a day to trim fresh branches and leaves for the fawns. 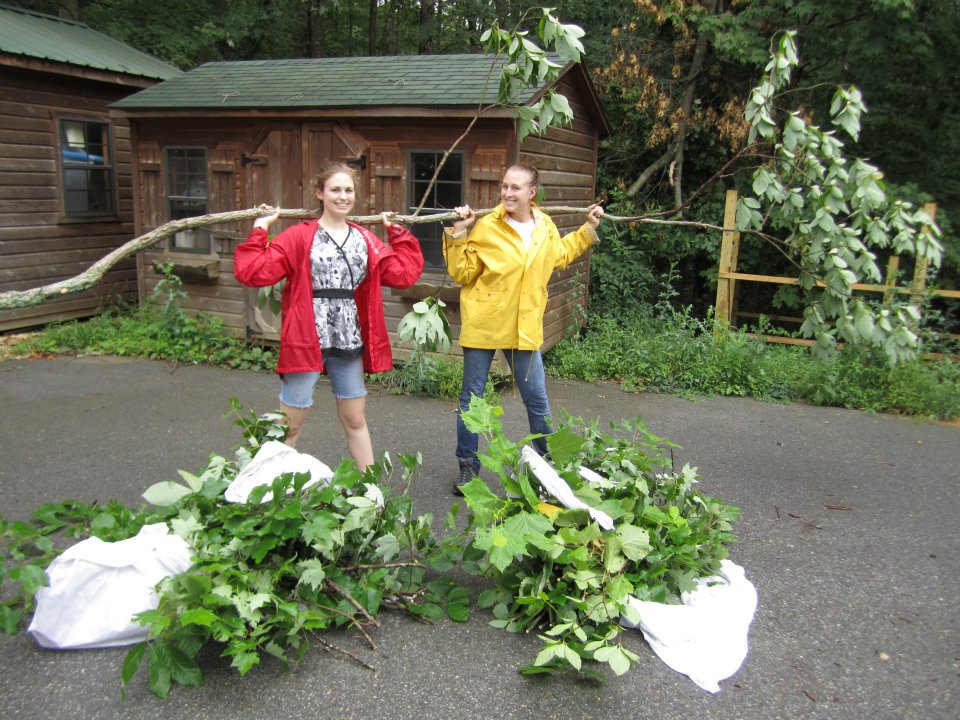 Initially, each fawn is housed individually indoors – this quarantine period gives the veterinary staff a chance to perform fecal examinations and other tests to determine the health status of each fawn. It is important to check the fawns for parasites that they could potentially spread to their future roommates. Once medically cleared, the fawns are moved to the deer runs in small groups of two or three.

As the fawns grow larger, are bottle-feeding well, and are starting to nibble on browse, they are moved to one of the Center’s deer yards, where they are part of a single herd.

As of late August, all 11 of the 2014 fawns are living together in a single deer yard. The fawns are slowly being weaned from bottle-feeding; as of August 25, most fawns are being bottle-fed once a day and are consistently eating browse. The rehabilitation staff is preparing the herd for release in late September or early October.

You can contribute to the care of these White-tailed Deer fawns by donating to the Wildlife Center.

The 2014 fawn release was a success! On the morning of October 2, a group of 21 people [Center staff, students, and volunteers] prepared for the capture and release of the nine White-tailed Deer fawns during “fawn round-up”. 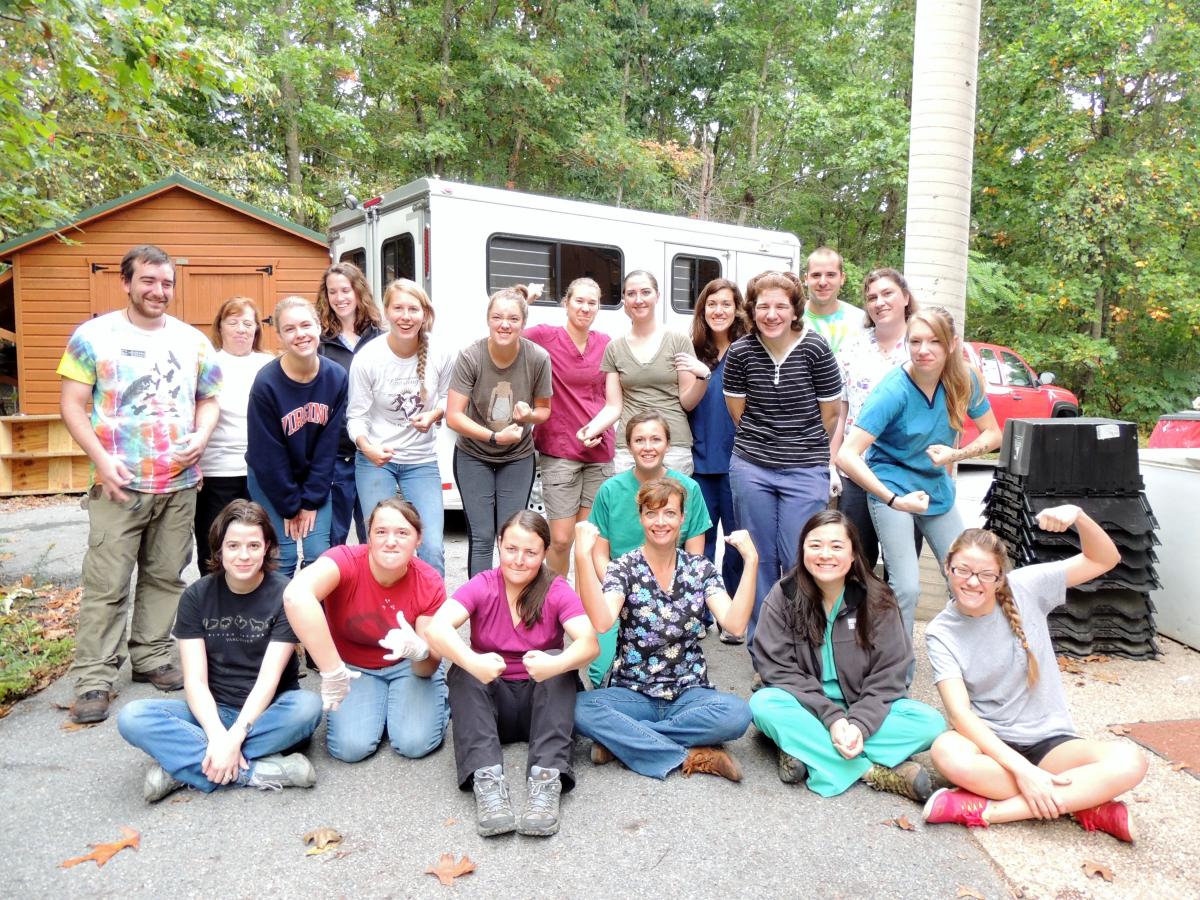 During the round-up, there were three teams. One team was tasked with building a “human wall” to corral the fawns into the sheltered area of the outdoor deer yard, making it easier for the second team to quickly capture fawns one-by-one. Once a fawn was in-hand, a fellow team member would assist in restraining the fawn as it was carried down the hill to the third team – the vet staff and students who removed the ear tags from each fawn before it was loaded into the trailer for transport.
Typically, fawn releases are broken into two locations so a single release site is not overwhelmed by a new, large deer population. Because only nine deer were being released this year, they were all taken to the same location. A landowner in Augusta County allowed the Center to release the fawns on his property. Certified wildlife rehabilitator Amber Dedrick reported that the property was a great deer habitat with plenty of food sources and multiple bodies of water.

On September 7, the White-tailed Deer fawns at the Center were weaned to once-daily bottle feedings and are now offered primarily browse; as of September 14, they will no longer receive a daily bottle and will be fed only browse.

During the next two weeks, the fawns will transition into their new browse-only diet and the rehabilitation staff will monitor their adjustment. If the fawns remain healthy and continue to eat well, the planned release date is October 2.

Fawn releases generally consist of a “fawn round-up” that involves staff, students, and volunteers to assist in the capture of the fawns in the deer yard. The small number of fawns this year will likely require fewer people for the round-up.

The Center is currently treating nine fawns. Two were recently humanely euthanized due to poor health.