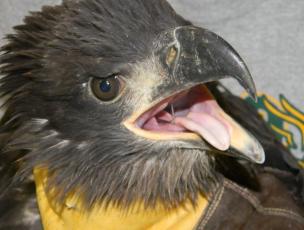 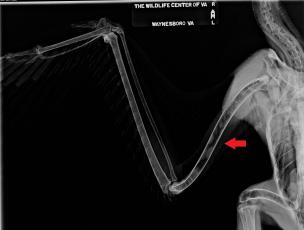 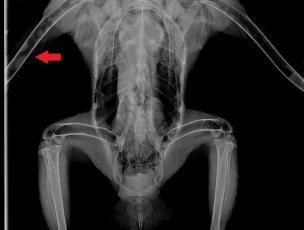 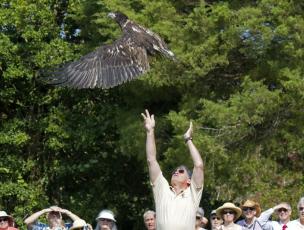 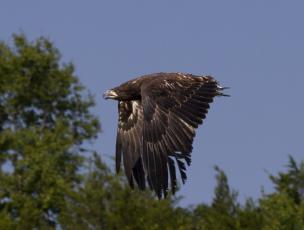 On June 4, a young Bald Eagle was spotted on the ground in a Virginia Beach neighborhood.  Permitted rehabilitator Lisa Barlow rescued the bird -- she examined it but couldn't find any injuries.  The following day, a release attempt was made -- but the young eagle didn't fly off very well.  The bird was recaptured and, at the direction of VDGIF, brought to the Wildlife Center on June 9.  Prior to the release attempt, biologists at the Center for Conservation Biology banded the bird [band letters are KS].  They also took measurements and determined that the young eagle is a female. The Wildlife Center veterinary team performed a thorough physical examination of the Bald Eagle.  Dr. Miranda found a small retinal tear in the bird's left eye.  This blind spot shouldn't cause the eagle any problems -- it's fairly small and is not on the bird's fovea -- the special sight area responsible for the sharp "eagle eye" vision.  However, it is near the fovea -- so additional monitoring will be needed.  Otherwise, the eagle appears to be in good health, though it is missing five tail feathers -- and two additional feathers fell out after it was removed from the crate for its examination. The eagle was moved to a small outdoor flight pen for observation.  Radiographs are scheduled for tomorrow.

Bald Eagle #11-1234 was anesthetized this morning for radiographs.  Dr. Miranda was surprised to see some abnormalities on the eagle's right wing -- several small little masses in the right humerus.  At this point, it's unclear what exactly they are or what the cause is -- the list of possibilities includes a fungal infection, bacterial infection, small hematomas (little blood clots), or something else unknown at this point.  Blood was drawn for in-house analysis as well as for a blood chemistry panel, which will be sent to an outside lab. Hopefully blood work results will provide more information to the veterinary team.  The young eagle will also likely be re-radiographed sometime next week to see if there any changes. In the meantime, the eagle is in a small outdoor flight enclosure and is bright and alert and perching.

Bald Eagle's #11-1234 is doing well.  Last week's blood work was all within normal limits -- meaning that there was no sign of infection.  Since follow-up radiographs aren't scheduled until Thursday June 23, the vets decided that it would be beneficial to observe this bird in a larger space.  And, while the young eagle is in a larger flight pen -- she may as well have some friends!  Bald Eagle #11-1234, or KS, will be moved in with the Norfolk Botanical Garden eaglets later today.

Bald Eagle #11-1234, or "KS" as she's known, has been flying around for the past week with the famous Norfolk Botanical Gardens trio.  While she's settled in quite well, June 21 will bring more adventure -- she'll be leaving the Norfolk eaglets and joining  Bald Eagle #11-1170, the young eagle from Maryland. The move will be done after Tuesday's weigh-in.  KS will also have another set of radiographs taken to evaluate the masses that were spotted during her initial radiographs.  She's been doing quite well, so the vets are hopeful that perhaps this issue has resolved.

KS was brought into the clinic yesterday for another set of radiographs.  Dr. Miranda determined that while some of the "masses" were still on her right humerus, they were starting to improve.  Given that things appear to be resolving, the WCV veterinary team think that these masses were likely hematomas caused by trauma.  Another set of radiographs will be taken in a month. After KS recovered from the anesthesia, she was moved into the A-2 flight pen -- and the Maryland eaglet was moved in with her.  Both appear to be doing well and are sitting on their swinging perches.

KS, along with Hampton Eagle #1235 and Maryland Eagle #1170are doing well in the "other" arm of the A-pen complex (adjacent to the NBG eaglets).  At this week's weigh-in and feather check, no changes were observed on KS's tail feathers.  Despite missing more than half of her tail feathers, KS still continues to fly well in the flight pen.

Bald Eagle #11-1235, KS, continues to do well in the Center's flight pens.  On July 27, she was moved to A1 -- and gained her former roomate NX, of the Norfolk Botanical Garden eagles.  You can see KS on the Wildlife Center's Animal Cam!

KS will be caught up on Tuesday, August 9, sometime between 9:00 a.m. and 10:00 a.m. [barring any unforseen wildlife emergencies].  The veterinary team will check her feet and feathers,  perform a routine ophthalmic exam, draw a small amount of blood for a routine complete blood count, and will weigh her.

KS was caught up this morning for a weigh-in, as well as a foot and feather check.  The veterinary team reports that KS’s tail feathers continue to grow in well.   The first three tail feathers are intact – and the others that were missing are now all “in blood” and are growing.  She weighed in at 4.03 kg. The Wildlife Center staff will be convening this week to determine the next step.

KS and roommate NX will be released on Tuesday, August 30 at Berkeley Plantation.  Earlier this week, after Dr. Miranda assessed the two birds at the weigh-in, she commented, "KS can fly great! She is very feisty and is able to get and maintain lift as well as change direction and turn in the air (difficult for any eagle in the width of flight pen that we have). Her tail feathers are growing in well and will be a lot more likely to stay in good shape out in the wild than it will be in captivity due to the artificial barriers we have (wooden walls, shade cloth, ropes that she can hit feathers on)."

Your donation will help support the Center’s work with patients like this Bald Eagle … and with 2,300 other wild animals in need.