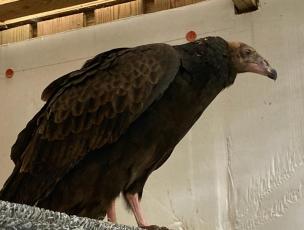 On September 12, a private citizen found a young Turkey Vulture stuck in a large mud pit near a construction site in Charlottesville. The citizen contacted some friends and family, who quickly gathered resources to rescue the vulture and met her at the site. Working together, they placed boards down to form a safe path over the mud. After an hour of difficult progress, they were finally able to reach the vulture and free it from the mud. They bathed it to remove the mud and brought it to the Wildlife Center later that day. 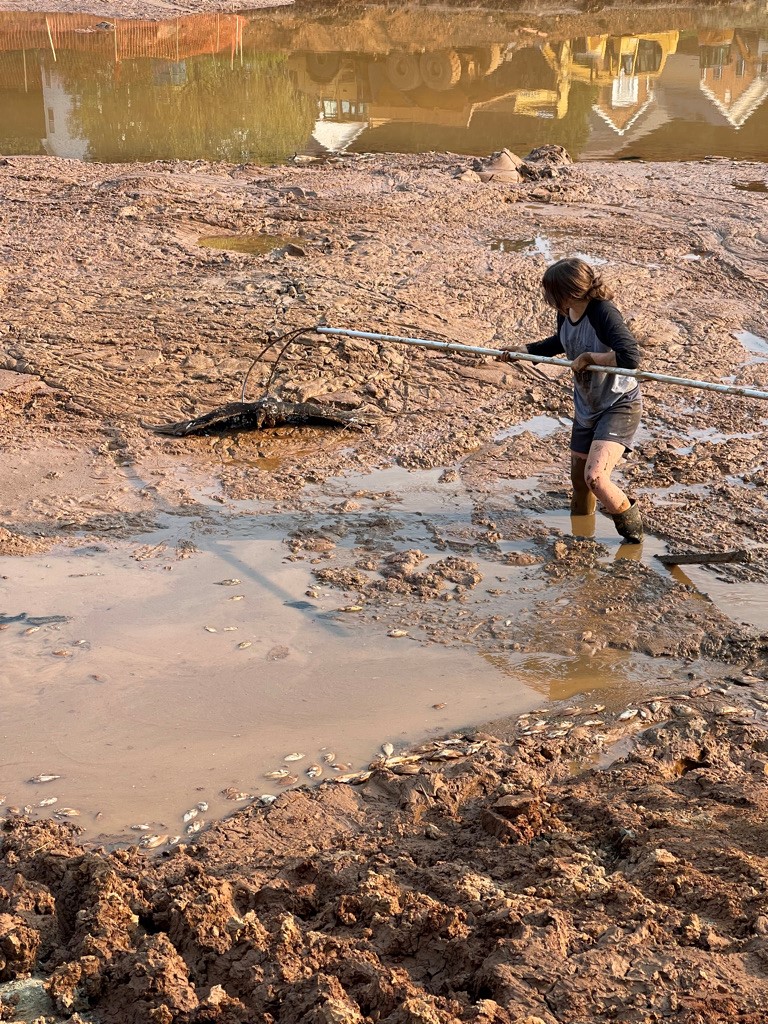 The rescuers noted that the mud pit where the vulture was found was surrounded by dead fish. It is likely that this vulture landed there in an attempt to scavenge the fish, but became entrapped in the mud. Being a younger vulture, it may have also been less coordinated, making it more difficult to free itself.

On admission, the vulture was alert, responsive, and standing in its crate. Center veterinary intern Dr. Jenn examined the vulture and found that it was slightly dehydrated and covered in a thin layer of mud, but did not find any obvious injuries. Radiographs did not reveal any bone fractures, but did reveal an opacity around the vulture’s lungs, possibly due to it aspirating mud. Though it did not appear to have respiratory issues, aspiration can lead to pneumonia, a potentially fatal infection in the lungs. Dr. Jenn started the vulture of course of antibiotics to combat potential infection, fluids to correct its dehydration, and anti-inflammatories.

The vulture is currently housed in the Center’s outdoor C-pens, where veterinary staff placed a large tub for it to bath itself and remove any remaining mud. So far, they report that it has been feisty during treatment and has not shown any signs of respiratory issues, though its prognosis is still guarded.

Your donation will help provide veterinary medical care to this vulture... and more than 3,500 wild patients in need this year. Thank you!

During the past two weeks Turkey Vulture #21-3227 showed no signs of a respiratory infection or other health issues. After completing its course of medication, the rehabilitation team moved the vulture to the A1 flight pen for assessment and exercise, and found that it was able to fly well and had the appropriate stamina to return to the wild.

On September 27, the veterinary team examined the bird and cleared it for release. On Tuesday, September 28 the rescuers picked up the vulture from the Center and successfully released it in an area close to where it was found. They reported that it hopped out of its crate, then gracefully took flight and joined other vultures circling overhead.