On August 26, 2015, a mature female Bald Eagle was released at Widewater State Park in Stafford, Virginia. The eagle was rescued in the same area in May 2015; the bird spent more than three months recovering at the Wildlife Center. Read more about the eagle’s history and rehabilitation here. Prior to release, the eagle was fitted with a GPS transmitter.

Wildlife Center staff continued to monitor W20's tracking late last week. Based on the lack of movement, along with some other data from the transmitter, the senior research wildlife biologist with Conservation Science Global thought it likely that the eagle had died. After additional discussion between Center staff, Connor, one of the Center's front-desk coordinators, decided to go out to the area on Sunday, December 6, to see if he could find the transmitter or the eagle's body. Based on the average of the data points that the wildlife biologist supplied, Connor was able to find the eagle quickly; sadly, the eagle was deceased.  He picked up the bird and brought her back to the Wildlife Center for a post-mortem examination.

Dr. Sarah, one of the Center's veterinary interns, found that Bald Eagle W20 was thin. There were no obvious wounds or fractures; radiographs revealed an irregularly shaped, 2.4 x 3mm metal opacity in the region of the bird's ventriculus [lower gastrointestinal tract]. A lead test was run on post-mortem fluid in the eagle's oral cavity, which came back as a high positive. This test is a preliminary test, as it is not the typical way the Center checks for lead on the in-house lead analyzer machine.

Center staff will be working with the Virginia Department of Wildlife Resources, U.S. Fish & Wildlife Services, and the tracking company, Conservation Science Global to coordinate a full necropsy and additional lead testing on biopsies.

Based on the tracking data, the Center staff suspect that the eagle had been doing well until about a week ago and then ingested small lead fragments, resulting in lead toxicity.

December 2: During this week's review of W20's travels, we noticed that she had not moved very much in the past week. While there is evidence of some natural activity, the data points seemed a little odd, so we consulted with the CellTrack team. They agreed that it looked like within the last day of reports, there was very little activity. The Center staff were able to find a volunteer transporter in the area (Spotsylvania County) who went to check out the scene on December 3. She spent a good bit of time in the area, but did not see any evidence of an eagle. 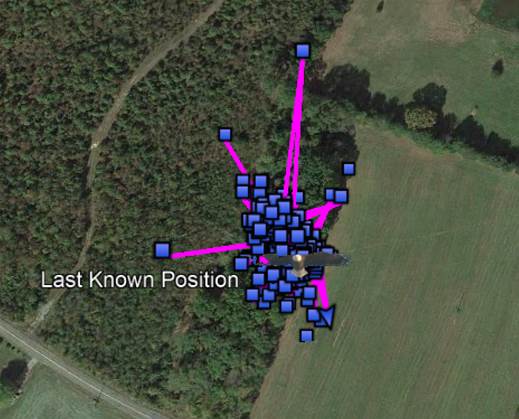 On the afternoon of December 3, W20's transmitter checked in again from the same location. We'll keep tabs on the tracking and it's likely that this weekend, front-desk coordinator Connor will look in the area for signs of an eagle or the transmitter. It's possible that the unit may have fallen off the bird.

November 25: During this past week, W20 stayed in Spotsylvania County, sticking close to the area near Wright's pond by Oliver's Corner. 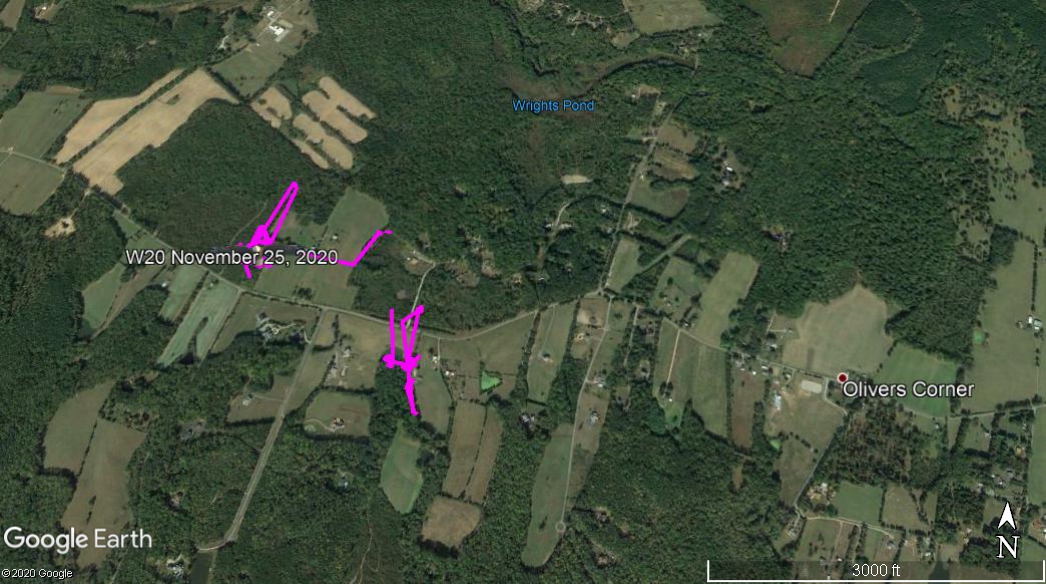