On September 21, 2015, a young female Bald Eagle was released in Westmoreland County, Virginia, near the George Washington Birthplace National Monument. The hatch-year eagle was rescued from Smarts Creek in June 2015. Read more about the eagle’s history and rehabilitation here. Prior to release, the eagle was fitted with a GPS transmitter.

At the Center, the eagle was known as #15-1348 – the 1,348th patient admitted to the Center in 2015. Now, the eagle will be known as GW91. “GW” represents George Washington National Birthplace Monument, near where the eagle was released. The numbers are the last two digits on the transmitter that the eagle is wearing. Each transmitter has a five-digit number written on the side of it in permanent black marker so that the eagle could possibly be identified at a distance.

This eagle traveled south to Sussex Country Virginia after release and explored this area until her death in early November.

After this eagle's release on September 21, 2015, she flew south to Harrell Pond in Virginia and remained here for about a month and a half. Throughout the month of October, she was exploring King and Queen County and Sussex county near Harrell Pond. In early November, the staff noted that her movements became increasingly localized. The Center reached out to a permitted rehabilitator in the area to see if she would be able to visit the last location of the bird to check for signs of trouble. Sadly, the rehabilitator found the bird dead. The eagle was returned to the Wildlife Center for an examination on November 14. The eagle was heavily scavenged and the vets estimate that the bird had been dead for several days before it was picked up on November 13. Unfortunately, not enough tissue remained to test for toxins. The veterinary staff found no fractures on the bird, but otherwise it is not possible to determine the cause of death. 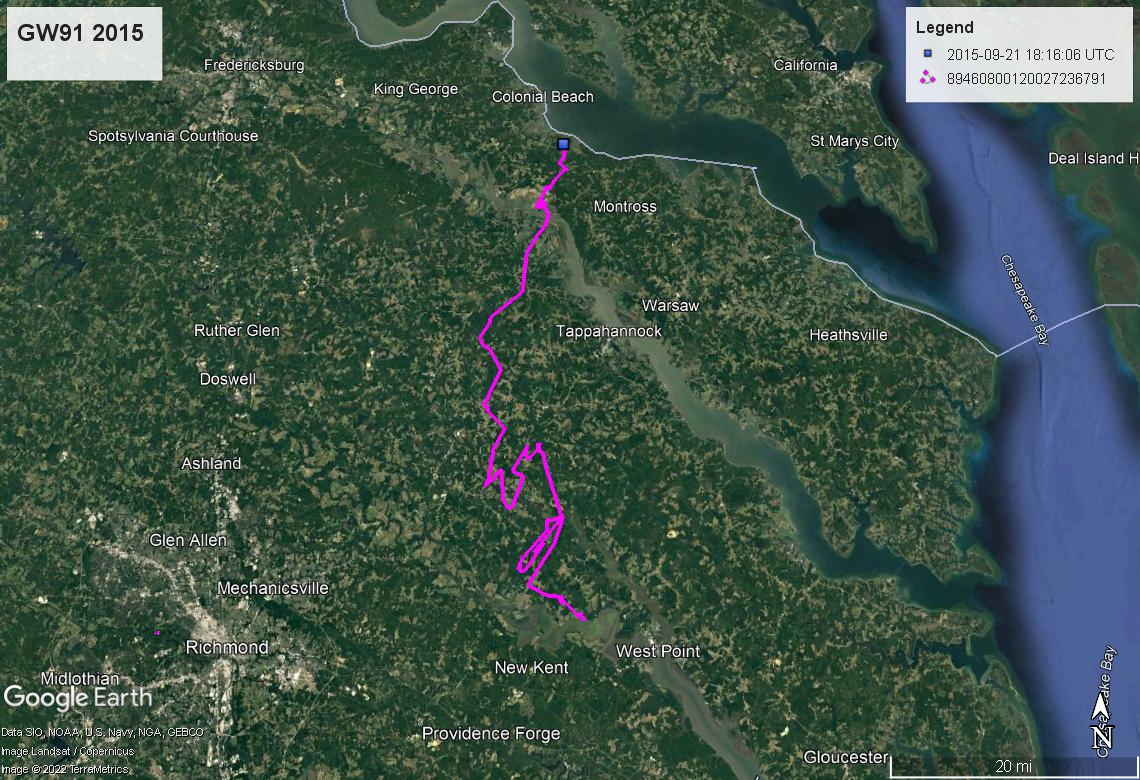 Where was she? GW91 Tracking Archives.