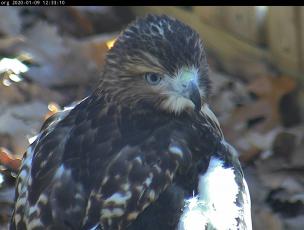 On August 22, an immature Red-tailed Hawk was found down in a field in Bedford County, Virginia. The property owner, who works at Peak View Animal Hospital, took the hawk to her clinic for stabilization before the young bird was transferred to the Wildlife Center the following day.

The veterinary team found that the hawk had a fracture of its right ulna, as well as a fracture of the right radius. The bird had signs of internal trauma and was also very thin and anemic. The veterinarians were able to surgically repair the fractures, and the bird spent the next several weeks healing.

Unfortunately, as the hawk’s fractures healed, the healing radius and ulna began to fuse together; this process is called synostosis. The team knew that the hawk was at a higher risk of this fusion due to the location of the fractures on the adjacent bones. In October, the hawk had a second surgery to remove the callous growing over the healing bones.

In the weeks following, the hawk went through a rigorous physical therapy regiment to help correct the poor range of motion and rotation on the injured wing. By November, the hawk was moved to an outdoor C-pen; a week later, the hawk was ready to begin flying in a larger flight pen after its prolonged hospitalization. 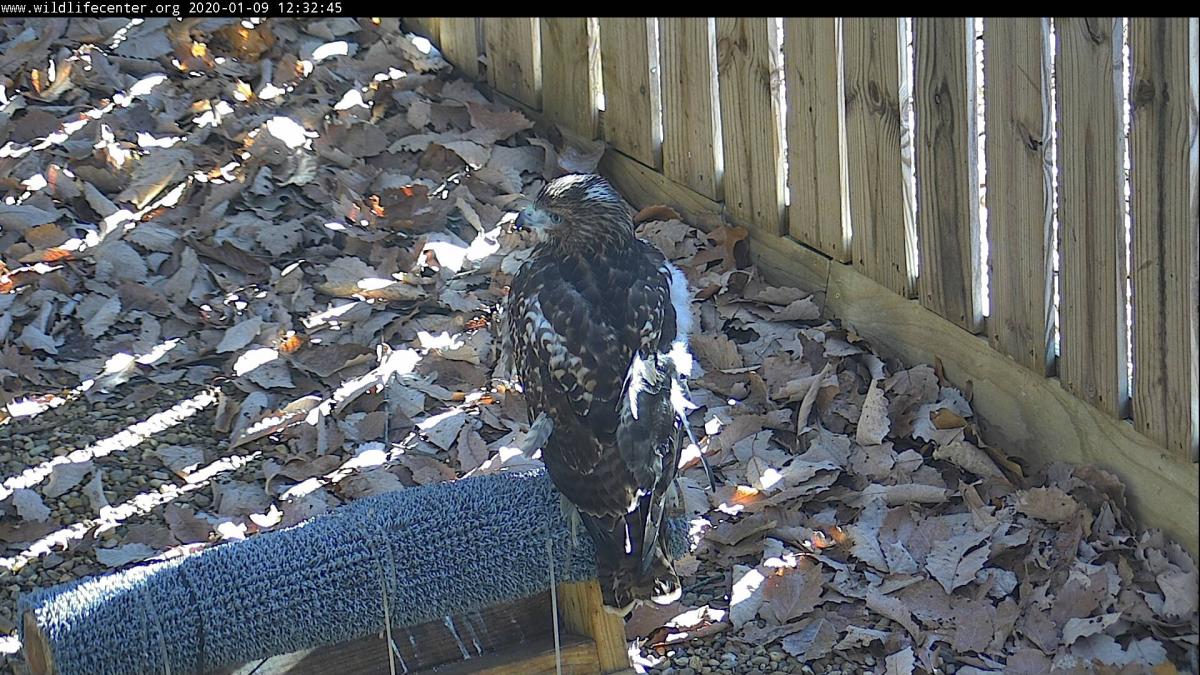 The rehabilitation team has been regularly creancing the young Red-tailed Hawk. Creancing is a falconry technique that uses a long braided nylon line that allows a bird to be tethered during flight in a large open space. Creancing allows for more maneuvering and better assessment of some raptors; it’s regularly used for recovering falcon patients, and can be helpful for other individuals based on attitude and injury.

So far, creancing is going well; the rehabilitation staff watch carefully to evaluate the hawk’s lift, wing movement, and landings. The hawk is currently living in flight pen A2 – on Critter Cam! – and is exercised in the enclosure on days when it isn’t being creanced off-site.

Your donation will help provide special veterinary and rehabilitative care to this recovering young Red-tailed Hawk, as well as more than 3,000 patients that the Center will treat this year. Thank you!

On March 14, Red-tailed Hawk #19-2663 was released by veterinary technician intern Rayshaud Holloway at the bird's original rescue location in Bedford County, Virginia.  During the past few weeks, rehabilitation staff had worked very diligently with this bird on a creance line and noticed a significant improvement in the bird's flight abilities. The hawk successfully passed live prey training, which means that it should be able to hunt and catch its own food in the wild.

Red-tailed Hawk #19-2663 has been doing well in the Center’s flight pens during the past few weeks. The bird is currently growing in several new flight feathers, and the rehabilitation staff have noted a marked improvement in the bird’s flight. While the hawk still needs to work on altitude, there are no indications that the bird has any skeletal or muscular issues from its initial injury; it appears that, with additional feather growth, the hawk will continue to improve flight capabilities.

The rehabilitation staff started offering the hawk live prey, to ensure that the bird can successfully catch and kill its own food, prior to being considered for release.

Red-tailed Hawk #19-2663 has been thriving outdoors in a large flight pen. The rehabilitators have been exercising the bird daily, and it has been doing well, although it is still flying too low to the ground, likely due to the missing flight feathers. Although the bird’s flight height is unsatisfactory, its stamina is adequate as well as its ability to maneuver around obstacles. The veterinary team will continue to monitor its exercises closely.

Red-tailed Hawk #19-2663 has been doing well in the Center’s A2 flight pen; the bird is eating well and has been offering Critter Cam viewers some nice, up-close shots! 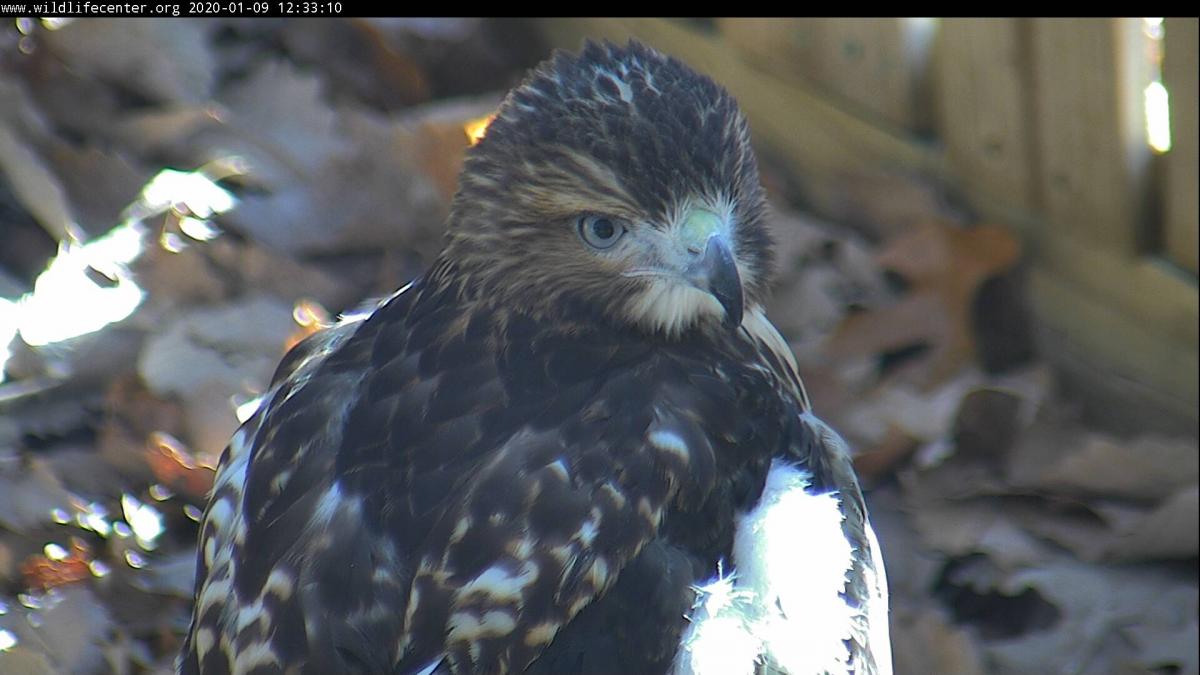 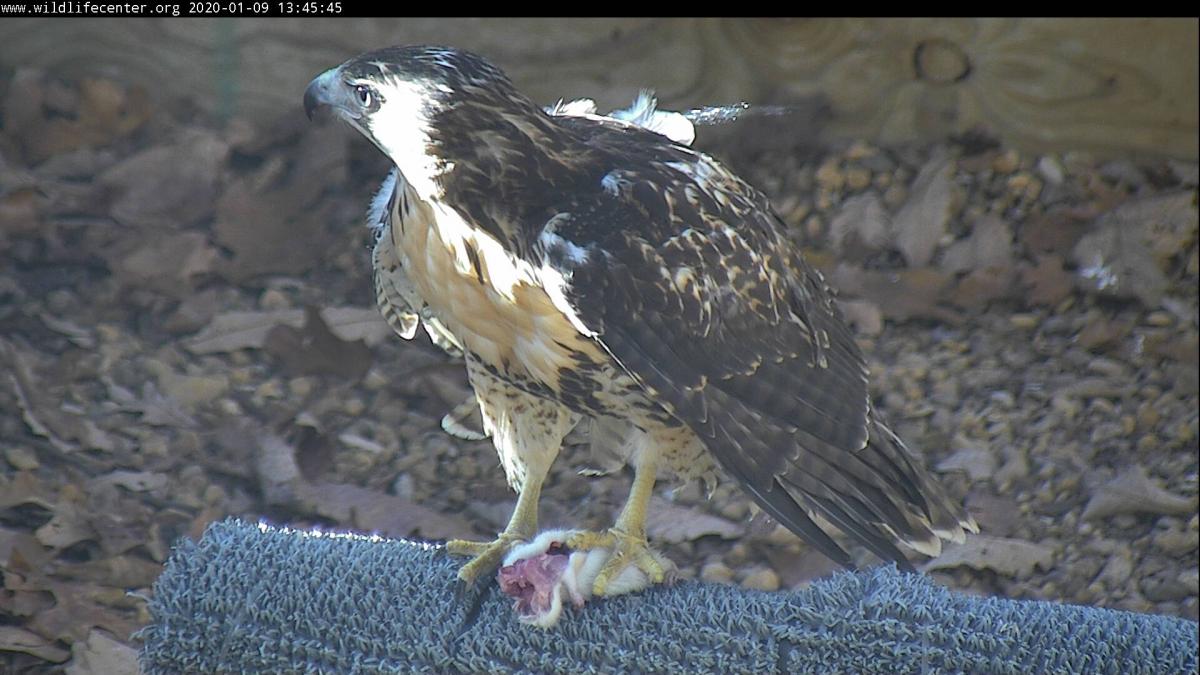 Unfortunately, the rehabilitation staff determined that the bird has been unable to gain much height during either creance sessions or flight-pen exercise; the cause is suspected to be the feather damage sustained during the bird’s initial trauma and two surgeries. To give the hawk time to safely grow in a new set of secondary flight feathers, the staff decided to stop formal exercise for now, and just allow the bird to self-exercise in the flight pen. Once the bird molts [likely this spring], the staff will re-evaluate.