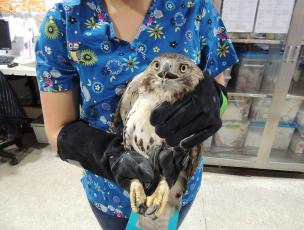 On October 26, an immature Red-tailed Hawk was spotted on a street in downtown Richmond. Richmond Animal Care and Control officers responded to the scene, as did a Wildlife Center volunteer transporter. The hawk was successfully captured and brought to the Wildlife Center that same day.

The hawk was admitted as patient #13-2557 and received a physical examination from Dr. Kristin Britton, the Center’s veterinary intern. Dr. Kristin found that the hawk had small hemorrhages in both eyes, as well as injuries to the vitreous – the thick, transparent substance that fills the center of the eye. No fractures were found on physical exam.

Dr. Kristin anesthetized the hawk to take radiographs and found that the hawk had air in its body cavity, which is likely due to a ruptured air sac. All injuries suggest that the hawk suffered some sort of impact trauma in downtown Richmond.

The hawk received fluids, anti-inflammatories, and eye medication before it was placed in a crate in the Center’s holding room. Dr. Kristin anticipates that after several days of medications and cage rest, the hawk will be moved outside to a flight pen for flight-testing.

Your special donation will help the Center to provide care to this patient … and to the 2,600 sick, injured, and orphaned wild animals the Center will treat this year.

Red-tailed Hawk # 13-2257 continued to fly well during the past few weeks with good maneuvering, endurance, and perching. The hawk reached optimum flight conditioning level on November 17 and began live-prey testing the following day. The hawk passed each night by killing and eating its prey for three nights in a row.

On November 25, the veterinary staff began the hawk’s pre-release evaluation. The staff checked the condition of the bird’s feet and feathers and collected blood to test for any abnormalities. The bloodwork returned within normal limits, and the hawk was cleared for release and banded.
On December 3, the rehabilitation staff released Red-tailed Hawk #13-2557 in a field in Augusta County. The bird flew off and then comfortably perched in a nearby tree to assess its new surroundings. Below is a video of the release.

On November 7, Red-tailed Hawk #13-2557 began flight conditioning. The bird appears to be flying and maneuvering well, and its endurance has increased with each daily exercise session. Exercise will continue until the hawk reaches optimum level – 15 passes from end-to-end each day for seven days. Once the hawk reaches optimum level, it will be evaluated for live-prey testing.

Red-tailed Hawk #13-2557 has been recovering well over the past week. On October 29, Dr. Rich Sim examined the hawk’s eyes, and found that the minor eye injuries had resolved. The bird was moved to a small outdoor pen.

On November 4, the hawk was moved to a larger flight pen [FP6]. So far, the bird seems to be flying and perching well. The rehabilitation staff will begin exercising the bird within the next two days. If the Red-tailed Hawk flies well, the bird should be able to be released later this month. Watch for this hawk to make an appearance on the Center's Critter Cam!