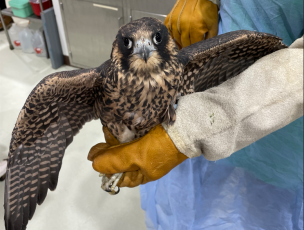 On June 8, a hatch-year Peregrine Falcon was found injured on the ground in Norfolk, Virginia after hitting the side of a building during flight. The bird was rescued that same day by permitted rehabilitator Lisa Barlow of Tidewater Rehabilitation and Environmental Education and was transported to the Wildlife Center of Virginia on June 9.

During the intake examination, veterinary intern Dr. Olivia found that the falcon had an increased respiratory rate and was quite stressed. While anesthetizing the bird for a complete exam, blood was observed within the trachea and mouth. Radiographs revealed internal bruising in several areas and fluid in the bird’s air sacs, both of which are consistent with significant internal trauma related to collisions. No injuries to the bird’s eyes were noted during an ophthalmic exam, and aside from possible soft-tissue damage near both shoulder joints, no external injuries or abnormalities were noted.

The veterinary team administered pain medications, anti-inflammatories, and fluids, and placed the falcon in a specialized oxygen-rich chamber within the Center’s indoor Hold area. Throughout the following week, the falcon received supportive care and lead toxicosis chelation therapy two times per day. For now, the young Peregrine Falcon will remain in Hold. Due to the severity of the internal trauma sustained, and Peregrine Falcons’ status as a high-stress species that often do not do well with this type of trauma in a rehabilitation setting, the prognosis for this patient is currently guarded.

Your donation will help provide veterinary medical care to this injured Peregrine Falcon ... and more than 3,800 other patients that the Wildlife Center will help this year.

Following three and a half weeks of flight conditioning at the Blue Ridge Wildlife Center, Peregrine Falcons #22-1633 and #22-1909 were deemed ready for life back in the wild! Blue Ridge Wildlife Center staff shared a short video clip on social media of the double-falcon release on September 5 -- both birds can be seen exiting the travel crates without hesitation, flying strongly toward a distant ridge line and out of sight.

Thanks to everyone who joined us yesterday for a release of 2 Peregrine Falcons, & thank you to Stacey for sharing this video of the release! pic.twitter.com/NmDC7UyNYS

During the week of August 8, Center staff determined that Peregrine Falcon #22-1633 was ready to begin an exercise and flight conditioning routine. Initially, Center staff planned to exercise the bird and continue providing supportive care until its potential release. After conferring with staff at the Blue Ridge Wildlife Center, the decision was made to transfer this falcon and Peregrine Falcon #22-1909 into the care of their permitted veterinary and rehabilitation staff.

On August 10, both falcons were transported to the Blue Ridge Wildlife Center. Transferring patients between permitted wildlife rehabilitation facilities is not an uncommon practice; in these falcons' case, it was determined that continued flight conditioning could be best achieved through the use of BWC's outdoor specialized, circular enclosure. On August 13, Blue Ridge Wildlife Center staff shared a short video of one of these falcons entering the specialized enclosure on social media:

Our friends at @WCVtweets recently transferred 2 juvenile Peregrine Falcons that needed flight conditioning. With our large circular flight cage that allows continuous flight, we were happy to partner up & help! pic.twitter.com/eafRjtm1WV

Both falcons will remain at the Blue Ridge Wildlife Center and receive supportive care and flight conditioning exercises until they are ready for their return to the wild.

Peregrine Falcon #22-1633 has been showing signs of recovery during the past month. Chelation therapy for the bird’s sub-clinical lead toxicosis was completed on June 14, and a blood sample drawn and tested on June 15 showed no signs of remaining lead in the falcon’s system.

On June 28, the veterinary staff determined that the falcon was ready to be moved from the indoor Hold area to Metals, one of the Center’s outdoor transitional spaces designed to reduce patient stress. While being housed in Metals, the staff noted that the falcon was not eating as well and had developed a wound on its cere (the protective, yellow skin above the upper beak). Compared to other native raptors, Peregrine Falcons are a relatively high-stress species in a rehabilitative setting. After treating the cere wound, veterinary staff prioritized moving the bird to a larger, more open enclosure in an effort to further reduce its stress levels as soon as possible.

On July 13, it was moved into flight pen C5 alongside Peregrine Falcon #22-1909. The bird was observed eating inside this new space almost immediately after being transitioned, and was transferred to the rehabilitation staff for continued care.

For now, Peregrine Falcon #22-1633 will remain in flight pen C5 under close observation. Center staff plan to assess the bird during the week of August 8 to determine its eligibility for future flight conditioning.