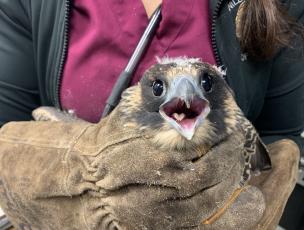 On Monday, June 22, the Richmond Peregrine Falcon fledgling was admitted to the Wildlife Center. This young female falcon hatched on the Richmond Falcon Cam; thousands of people watched the chick grow up in downtown Richmond, Virginia. This is the same nesting location where Maggie, the Center's education Peregrine Falcon, hatched and grew up, though the young bird is no relation to Maggie. 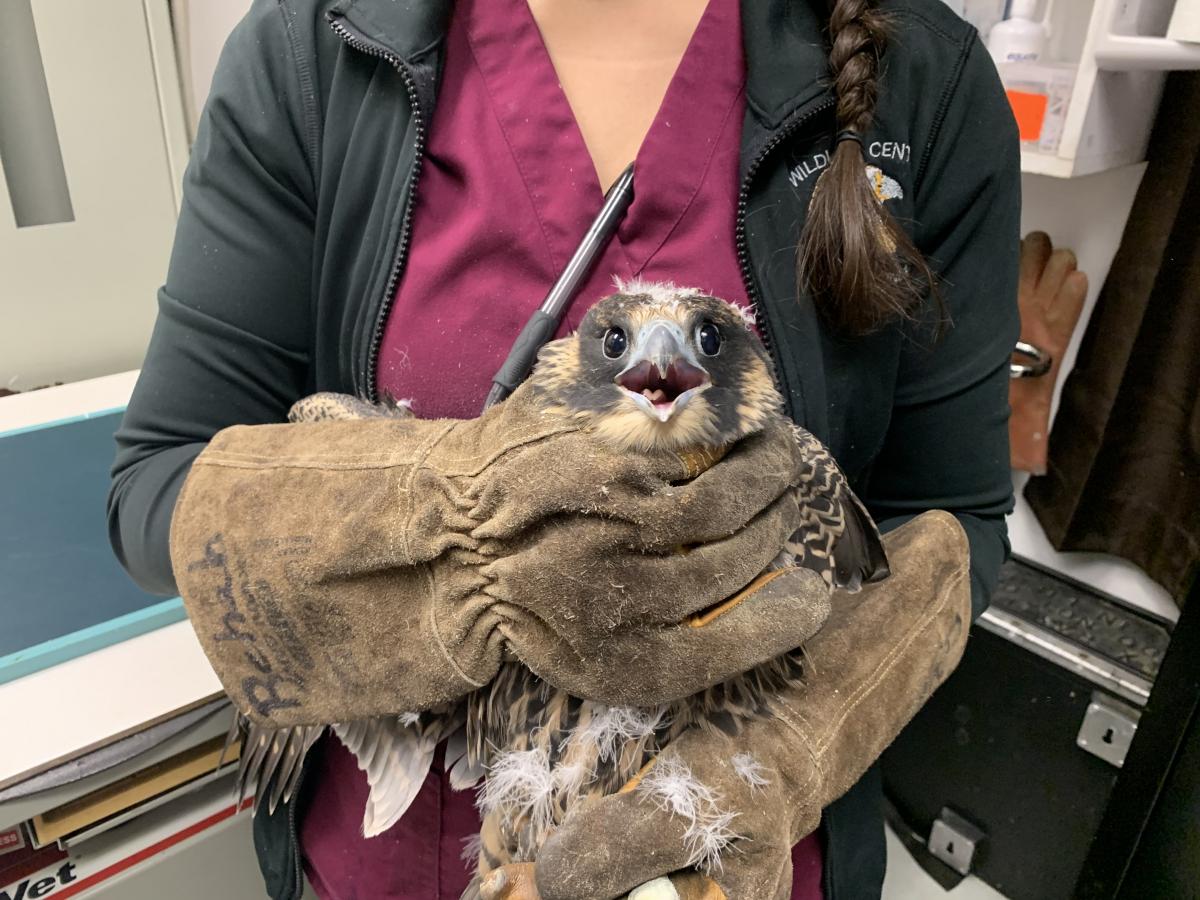 This past week, the young falcon attempted to fledge from her nest two different times; officials with the Department of Game and Inland Fisheries thought the first small flight from the nest was a little early, and they returned the young bird to her nest box. The bird fledged again on June 22 and went onto the expressway -- DGIF officials called police to stop traffic to retrieve the bird safely. Officials elected to bring the falcon to the Center for a physical examination and to keep the bird for a short period of time until she is more coordinated in her flight efforts.

Dr. Karra did a quick physical examination on the evening of June 22 and found that the bird had no apparent injuries. Additional radiographs and blood work will be taken on June 23. Center staff will remain in close contact with DGIF officials to determine the next steps for this young Peregrine Falcon.

Your donation will help provide care to this Peregrine Falcon ... and more than 3,000 other wild animals that the Center will treat this year. Thank you!

On Wednesday, July 15, the young Richmond Peregrine Falcon fledgling was picked up for release! The bird has been flying well in the Center's flight pen, and the Department of Wildlife Resources decided it was time to put the bird back in the wild in Shenandoah National Park (SNP).

According to DWR, "For various reasons, we decided that it is in the chick’s best interest to be released into suitable habitat at SNP rather than in downtown Richmond. Young falcons hatched on Virginia bridges are released (hacked) annually at SNP under carefully monitored conditions and falcon chicks from prior Richmond broods have also been hacked at SNP in the past.  Although she is flying well, the chick will still need to perfect her landing skills when released, which is better accomplished at SNP where she will not have to contend with busy roads and glass buildings. Given her absence of roughly three weeks from downtown Richmond, there is also uncertainty as to whether her parents could react aggressively toward her if they fail to recognize her. Finally, releasing the bird at SNP will contribute to our collective efforts to re-establish a breeding population of peregrines in their historic mountain range in Virginia.

"The chick was transported to the SNP release site on Wednesday, July 15th where she is being held (and fed) in a hack box for 48 hours to acclimate to her new location on a natural cliff in the mountains. Upon release she will be free to roam the landscape at will. Along with two young male falcons that were hacked at this site in mid-June, she will continue to be fed for a couple of weeks after release while she hones her hunting skills. Hack site attendants will monitor the falcons daily during this time."

Peregrine Falcon #20-2029 has been continuing to improve in flight and stamina during each daily exercise session. The staff are considering creancing the bird to better exercise the young falcon. Creancing is a falconry technique that uses a long braided nylon line that allows a bird to be tethered during flight in a large open space. Creancing allows for more maneuvering and better assessment of some raptors; it’s regularly used for recovering falcon patients, and can be helpful for other individuals based on attitude and injury.

As the falcon improves, the staff are reaching out this week to the Department of Wildlife Resources biologists to plan a release. DWR biologists will determine when and where the release takes place.

Peregrine Falcon #20-2029 has been doing well for the past few days; the falcon is in an outdoor flight pen, and staff members are encouraging the young falcon to fly several lengths of the flight pen each day. So far, the fledgling still has some difficulties taking off from the ground, but flies beautifully when she launches herself from a high perch. The vet team is hoping that a couple more days of exercise will help her improve as her feathers continue to grow.

The staff are in close touch with officials from the Department of Game and Inland Fisheries; biologists hope to release the young bird soon. 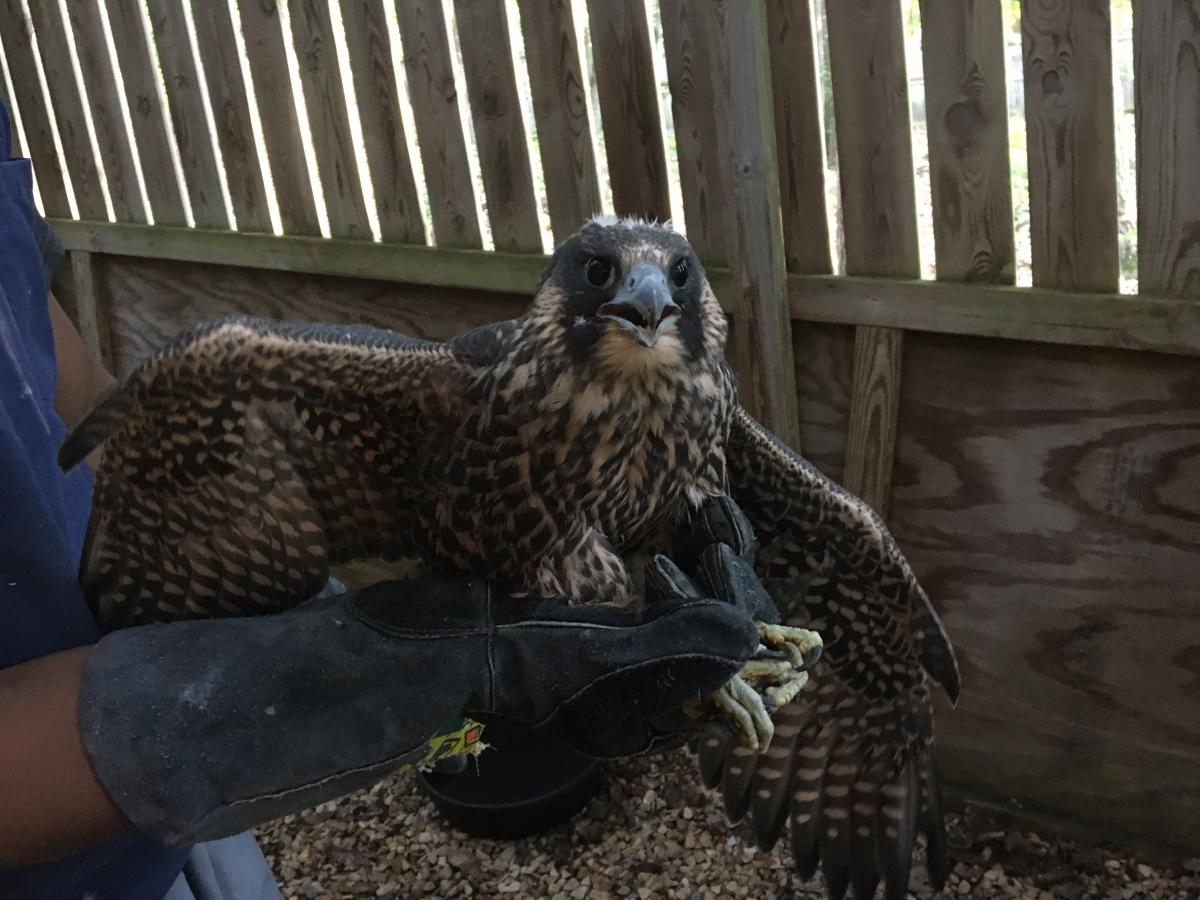 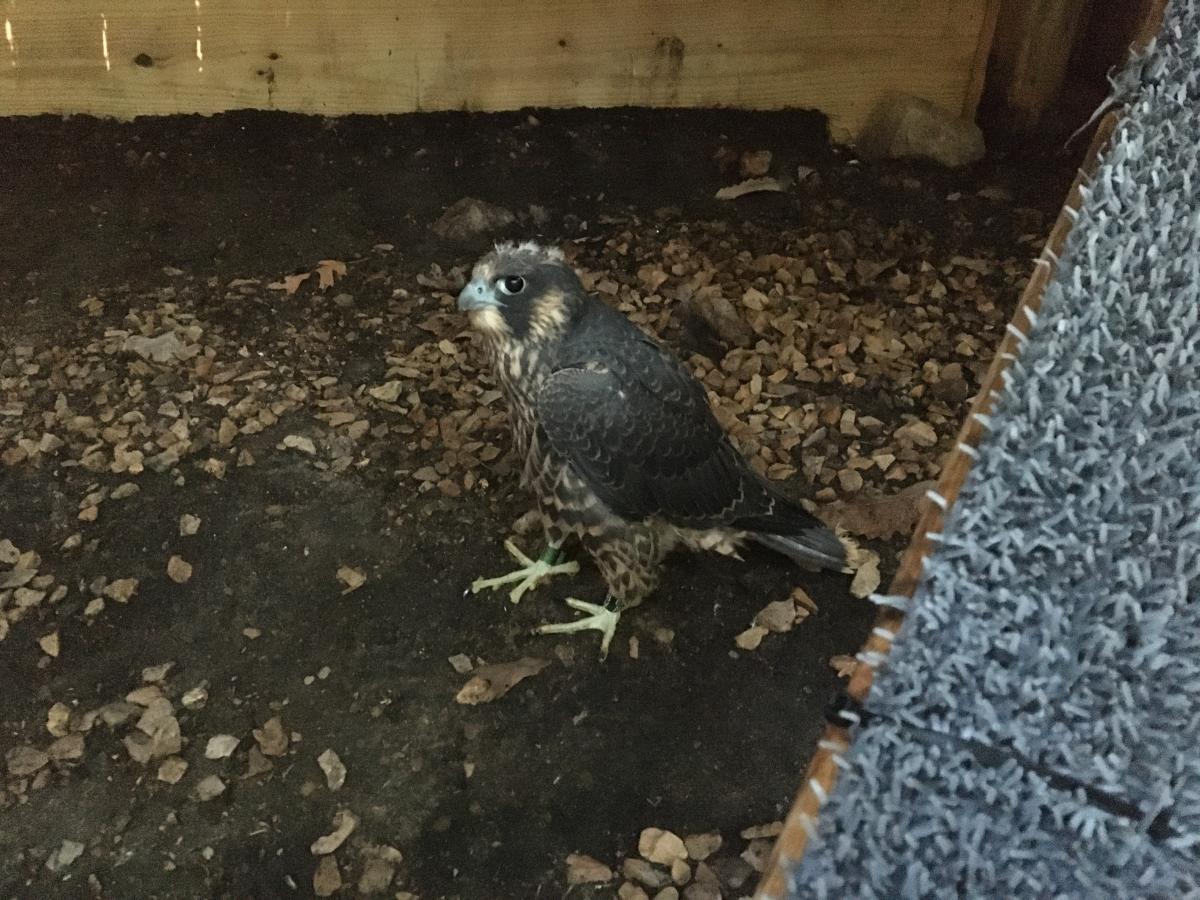