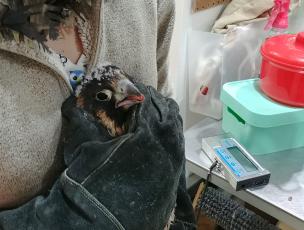 On May 14, a Peregrine Falcon chick fledged from its nest on the Benjamin Harrison Bridge in Prince George County and hit the road beneath the nest. Two cars drove over the young falcon without contact; the falcon was in the road for about 45 minutes before a registered transporter was able to successfully rescue the bird.

According to the Center for Conservation Biology (CCB), this nesting site has a long history of poor fledgling success since it’s a very high-risk area; often, the CCB pulls young chicks from this nesting site to “hack out” to other safer, more successful locations. This year’s brood hatched a bit earlier than other peregrines in the state, so the ages weren’t able to be matched with other active peregrine nests.  Peregrines historically nest on very high cliff faces, though over time, have adapted to urban areas and may nest on artificial structures such as high-rise buildings and bridges. 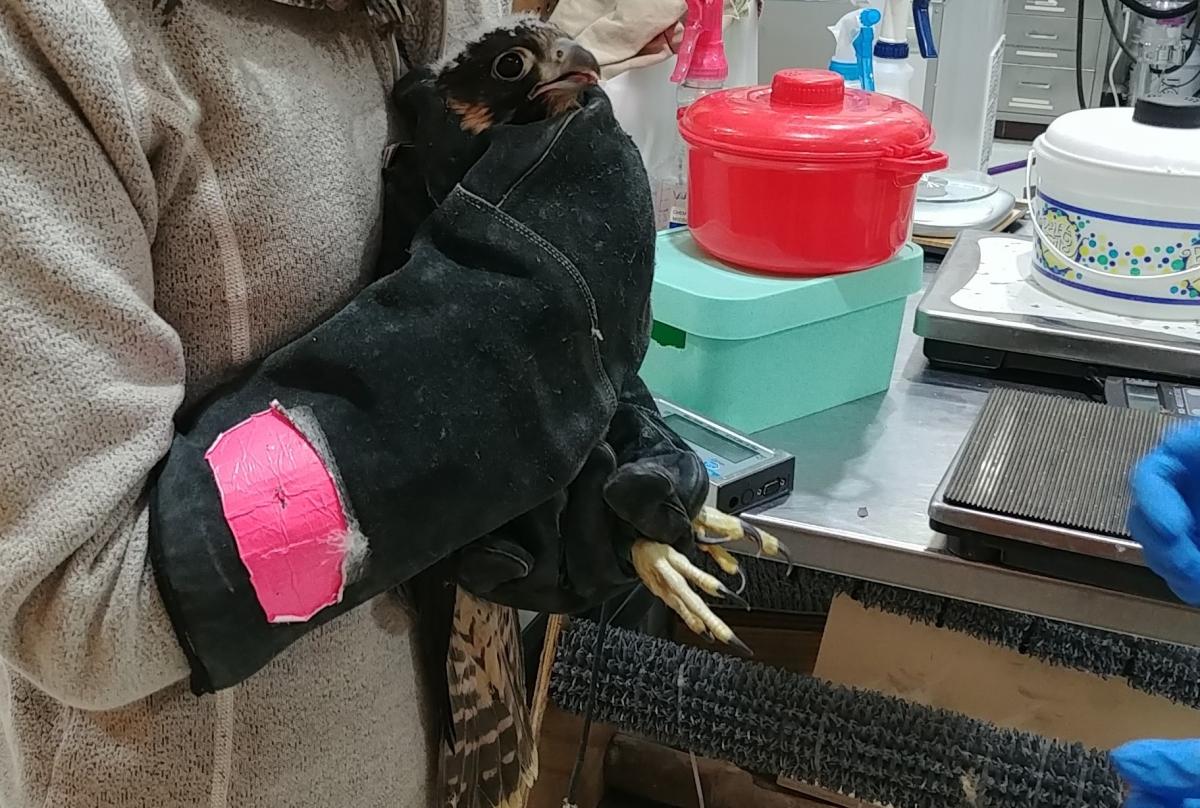 When the young falcon was admitted to the Center, it was bright, alert, and standing. Dr. Peach, the Center’s veterinary fellow, examined the bird and found that it had a keel [breastbone] fracture. Radiographs confirmed the fracture and revealed evidence of internal trauma, including damage to the lungs, and free air in the bird’s body cavity, likely due to a ruptured air sac.

Dr. Peach applied a body wrap to help stabilize the bird’s keel fracture, and also gave the bird pain medication before placing it in an oxygen chamber to assist with breathing.

The following day, the falcon was laying down in the oxygen chamber, though its breathing rate and effort were normal. Radiographs will be repeated one week following admission to check on the healing progress of the keel fracture. The young falcon’s prognosis is guarded, due to the nature of the injury.

Though Peregrine Falcons are making a comeback in Virginia, they are still considered state threatened. There are an estimated two dozen breeding pairs in the state.

Your donation will help provide veterinary medical care to this injured Peregrine Falcon ... and to the 3,000 other wild animals that the Center will admit this year. Thank you!

Peregrine Falcon #19-0940 was successfully released on Tuesday, September 10. About 40-50 people attended the release. Dr. Ernesto released the falcon facing the James River, with a perfect view of the very bridge where the young falcon hatched. The bird flew smoothly, circled the crowd, and flew off into the nearby trees. 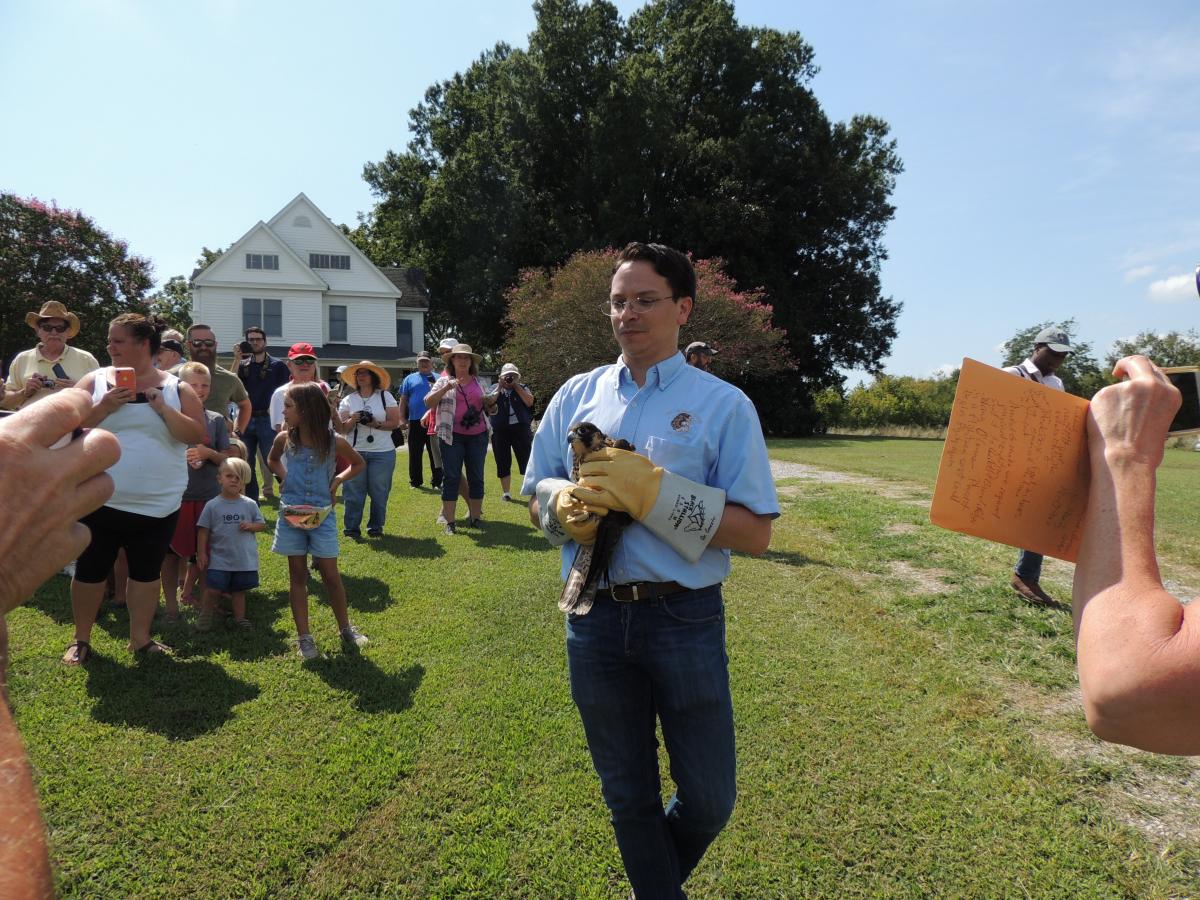 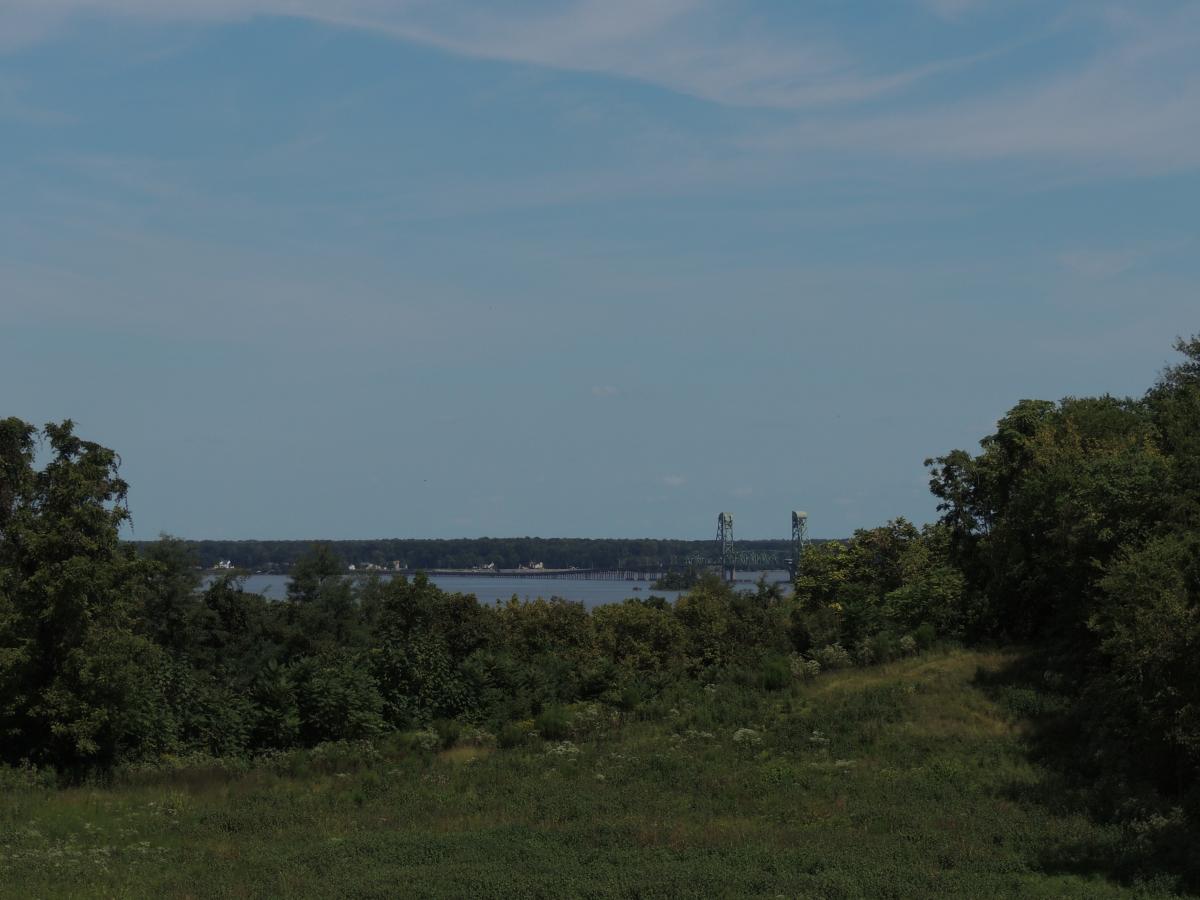 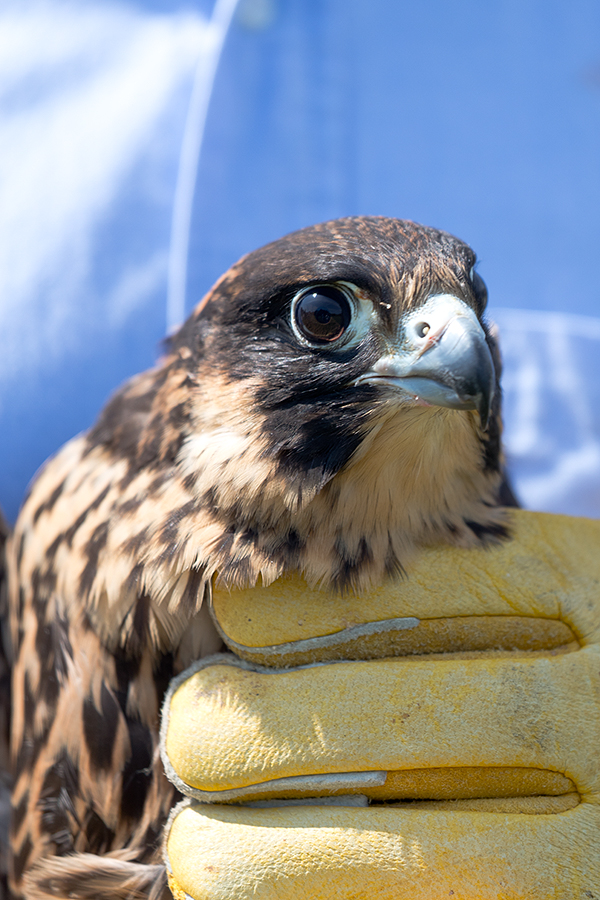 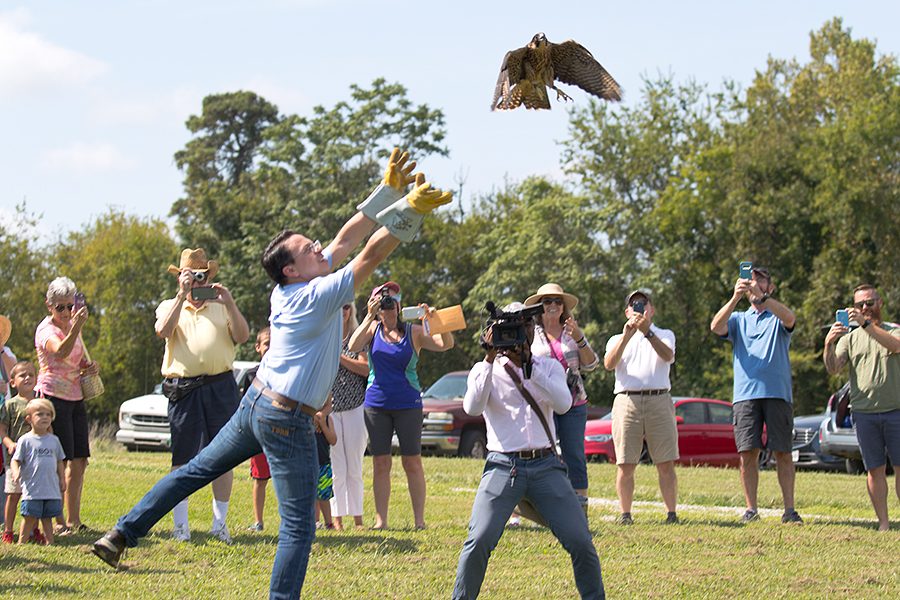 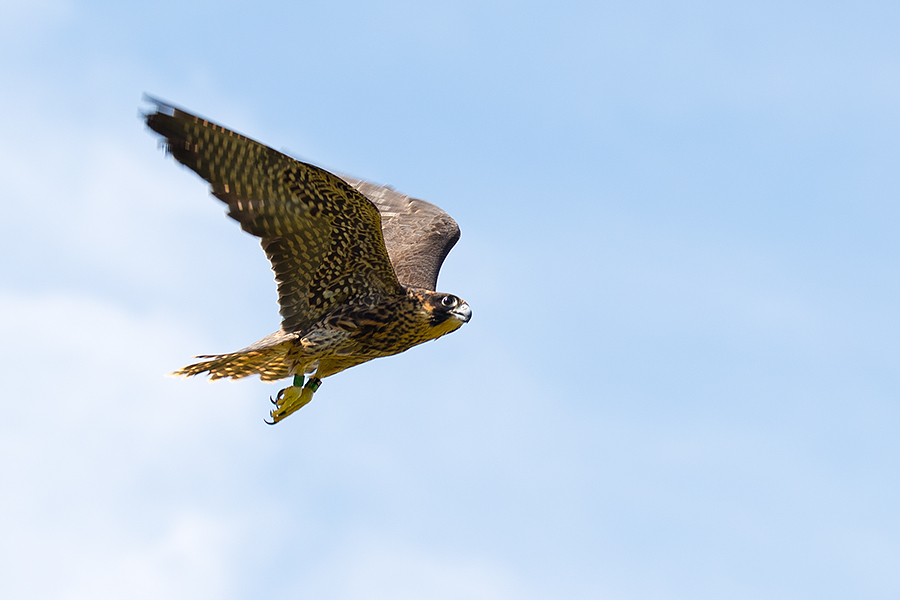 Falcon release in the news:

Peregrine Falcon #19-0940 is ready for release! After pre-release blood work was completed on September 5, the veterinary and rehabilitation staff declared that this young bird was ready to be returned to the wild. The falcon will be released on Tuesday, September 10 at 12:00 noon at the JamesCrest Farm in Hopewell [1315 Ruffin Road, Hopewell, VA 23860].

Wildlife Center Hospital Director Dr. Ernesto Dominguez will be releasing the falcon; the release is free and open to the public. JamesCrest Farm is privately owned, without public restrooms. If you plan on attending, please RSVP to rsvp@wildlifecenter.org. 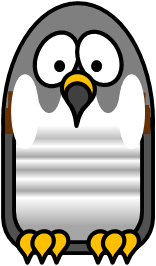 After spending several weeks at Wildbunch Wildlife Refuge, Peregrine Falcon #19-0940 has shown excellent improvement in physical strength and stamina and is flying very well. Their team of permitted wildlife rehabilitators reported that the falcon was able to complete more than 30 passes within the specialized circular flight pen, and on September 1 the bird was re-admitted to the Wildlife Center in preparation for its release!

During the next few days, Dr. Ernesto will coordinate with State wildlife officials to identify a suitable release site for the bird. Wildlife Center staff plan to return the young falcon to the wild as soon as possible -- keeping in mind the potential for severe weather conditions brought on by Hurricane Dorian.

Within the past two months, the Center has attempted to find a permitted falconer who could take Peregrine Falcon #19-0940 to work on flight-conditioning. Unfortunately, no one has been able to take the bird. Peregrine Falcons can be difficult to fully condition in captivity in preparation for release; this is often why the Center collaborates with biologists and other officials to find potential hacking sites or alternative solutions.

In absence of a hacking site or regular creancing work with a falconer or permitted rehabilitator, a large, wide flight pen can offer enough room for adequate flight conditioning, with large circular enclosures offering the most effective space. The wildlife rehabilitation staff reached out to permitted wildlife rehabilitators at Wildbunch Wildlife Refuge, who have a large, circular flight pen – and on August 16, the young falcon was transferred to that facility for further care and exercise.

Peregrine Falcon #19-0940 has been doing well at the Center; the bird has been eating well and growing in flight feathers for the past few weeks.

Center staff consulted biologists with the Center for Conservation Biology (CCB) as well as the Department of Game and Inland Fisheries (DGIF) to determine the next best steps for this young bird. Ideally, the falcon would be “hacked”, which is the controlled release at an artificial nest box. This practice helps build a bird’s flight skills and strength and offers supplementary feeding until a bird is old enough and adept enough to catch its own food.

The Center has worked with biologists before on hacking out former young peregrine patients. This method is preferable since it can be quite challenging to adequately exercise and flight condition a young Peregrine Falcon, given their amazing flight capabilities and speed.  Unfortunately, this particular falcon is not in sync with other peregrines that have been hacked; falcon #19-0940’s brood hatched a little earlier than other peregrines in the state. Instead, the CCB and DGIF biologists recommended transferring this young falcon to a permitted falconer for flight training with the goal of release.

On May 28, Dr. Peach took follow-up radiograph of Peregrine Falcon #19-0940 to check on the bird’s healing keel fracture. She found that the injury was healed and stable, and placed the falcon in a C-pen enclosure. In this area, the bird has room to make short flights and hops, and will gradually be able to be more active.

The falcon has been eating more readily on its own since the bandage was removed last week.

Peregrine Falcon #19-0940 has remained stable during the past week. Each day, the veterinary team monitors the bird’s respiratory rate along with its lung sounds. For the most part, the falcon has been breathing normally; occasionally the bird has an increased respiratory rate, but the lung and air sac sounds have been within normal limits, indicating that the ruptured air sac is not causing additional problems for the falcon.

On May 21, repeat radiographs were taken to check on the bird’s fractured keel. Dr. Peach found that while the keel defect is still noticeable on radiographs, the fracture feels stable and is healing well. Dr. Peach removed the body wrap and placed the bird back in a crate in hold. The staff will move the bird to a small outdoor enclosure next week. 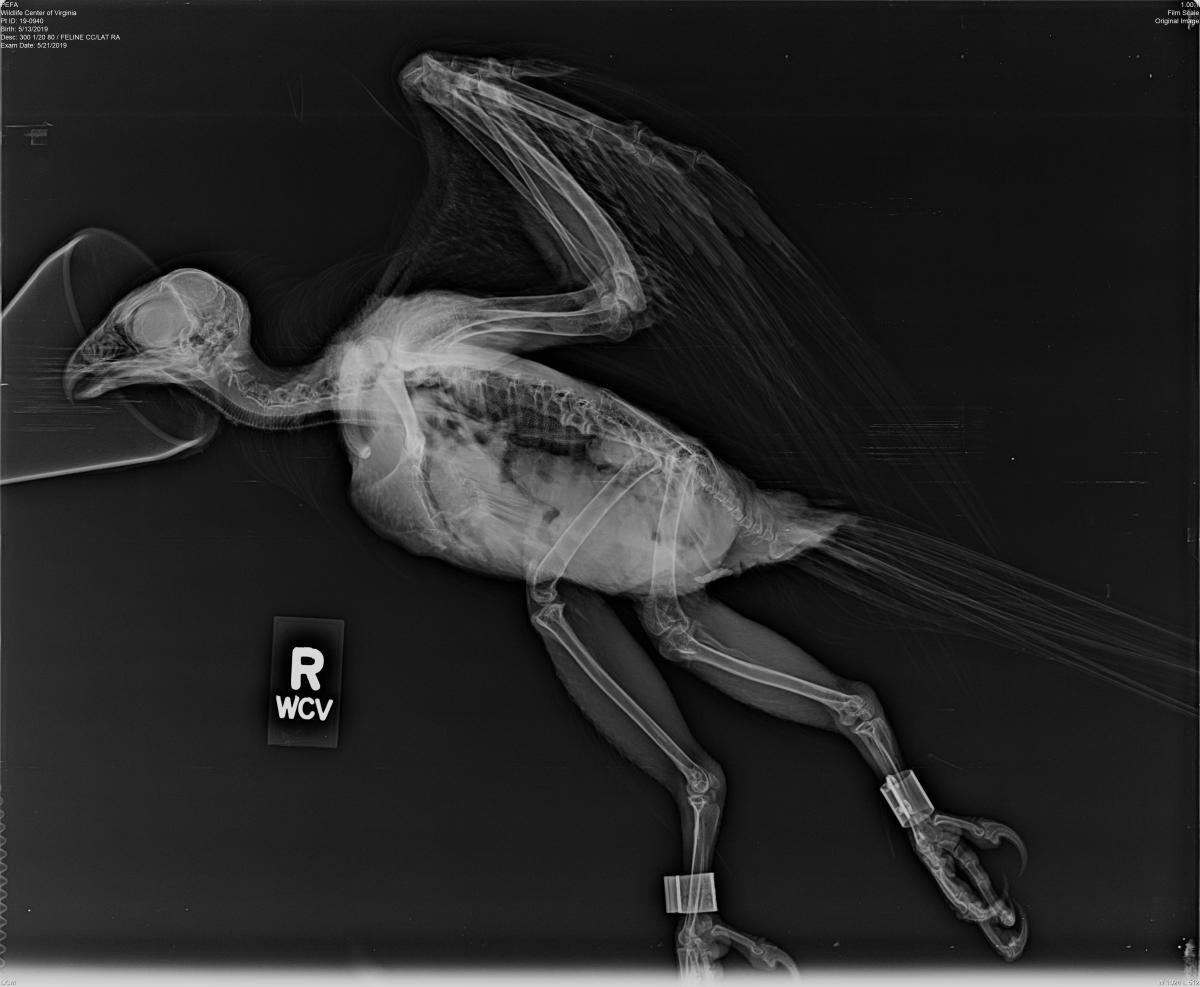