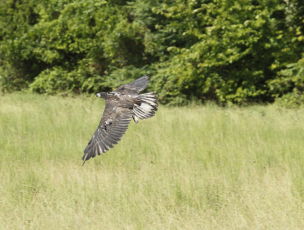 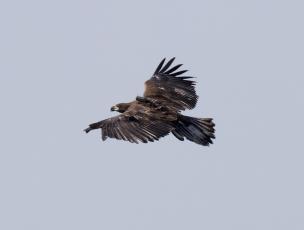 On April 27, three young Bald Eagles were admitted to the Wildlife Center of Virginia from the Norfolk Botanical Garden.  Already well-known in the eagle cam community, the three eaglets continued growing up on cam at the Wildlife Center.  [The complete history of these three birds' lives at the Center, including updates, photos, and videos, can be found here.]

On July 27, these three birds, along with two other Bald Eagles, were released at Berkeley Plantation, just east of Richmond.  When NX was released, she flew over the crowd of people, over the treetops and into a field, where she landed in the brush.  DGIF biologists and Center staff observed her and found her to be tired and stressed.  Feeling uncomfortable leaving her on the ground in such a high-traffic area, Dr. Dave McRuer recaptured the eagle. Dr. Dave examined the bird and found no injuries but noted that the eagle was over-stressed.  NX was placed in her travel crate in an airconditioned van for a couple of hours to cool off and recover.

During a second release attempt, she was still unable to gain the appropriate altitude to make it into a tree.  While her flight was strong and capable, officials did not feel comfortable leaving her on the ground.  While it is normal for young eagles to sometimes be on the ground, they typically have an adult to look out for them in this vulnerable position. Dr. Dave and VDGIF biologists decided that  NX would come back to the Center to spend some more time in the flight pen.

After the trip back to the Center on the night of July 27, Dr. Miranda gave the eagle subcutaneous fluids to assist NX in her recovery from the long, hot day.  NX was placed back into the 100-foot-long flight pen with Bald Eagle #11-1234 [KS]. NX is settling back into her enclosure and has been seen, through the Wildlife Center's Animal Cam, flying around the enclosure.  Animal cam viewers can easily distinguish NX from her roommate, KS, by the difference in feathers.  KS is missing many tail feathers;  NX is missing two flight feathers on her left wing [one feather broke several weeks ago, the other happened prior to release on July 27].   Viewers may also able to spot NX's GPS "backpack" -- the transmitter that she was fitted with prior to release. NX will be observed for several days before another release is considered.

NX will be falling back into a routine on August 2 -- the bi-weekly weigh-in.  Since it's been two weeks since her last weigh-in, and the veterinary team would like to closely examine her two broken primary feathers, Dr. Miranda and team will be weighing her and doing a foot and feather check around 9:00 - 9:30 a.m. on August 2. NX has been flying very well in the flight pen since her return on Wednesday afternoon.  After careful consideration, the staff have opted to keep her a little bit longer for further observation rather than releasing her this week. Dr. Miranda has noted that NX makes slightly different noises than her siblings -- more of a younger "cheeping" distress call rather than the angry "adult" eagle calls that NV and NZ were using prior to release.   To be on the safe side, knowing that not all eagles leave the nest at the same time, NX will remain at the Center just a bit longer to mature.

Dr. Miranda caught up NX on August 2 to examine the bird's broken feathers and assess the possibility of imping -- the process of grafting new feathers on a bird to replace damaged ones.   Dr. Miranda found that NX's broken feathers are broken near the base -- meaning that there is not enough room to do any imping.  NX continues to fly quite well, so the veterinary team is not concerned that two missing feathers will slow her down.  NX will grow in new feathers when she molts. NX weighed in at 4.08 kg -- the same weight as two weeks ago.

No weigh-in for NX today -- but her roommate, KS, was caught-up for a foot and feather check, weigh-in, and blood draw.  One reason why the vets didn't coordinate the weigh-in schedule of the two eagles was so they could observe NX during KS's capture.  At first, NX just saw on the far perch and observed -- but after taking a couple of flights through the pen, she resumed her perch and began her younger "cheeping" distress noises.  The Wildlife Center team will continue to observe NX and monitor her behavior.

NX and roommate KS were both caught up today for a weigh-in, as well as a foot and feather check.  The veterinary team was also quite interested to see how NX reacted when she and KS were caught up.   NX reacted differently this time around -- after flying the length of the pen a couple times, she landed on the ground in the back of the pen.  Rather than making the distressed "cheeping" noises and ducking her head as she has in weeks past, she reacted more defensively when Dr. Miranda caught her.  Her feet and feathers checked out well -- one of her broken feathers is "in blood" and beginning to grow.  NX weighed in at 4.18 kilograms. The Wildlife Center staff will be convening this week to determine the next step.

After Hurricane Irene rolls through, NX and roommate KS will be released on August 30, 2011 at Berkeley Plantation.  When asked about her assessment of NX's behavior earlier this week, Dr. Miranda stated, "NX is acting much more adult-like than previous weeks.  There was no cheeping calls, she was ready to attack when confronted instead of running to a corner and putting her head down (nestling behavior).  She is getting great lift when flying and is also very feisty!"

Bald Eagles NX and roommate KS were released today at Berkeley Plantation.  While NX didn't have the same picturesque release that KS did [who soared off into the distance], NX did quite well for herself.  After flying across a field, NX made a u-turn and landed in a boxwood tree -- not a very stable perch.  After landing on the ground, she gathered herself and then flew off across the field, gaining altitude.  NX then flew over some trees by the James River, and landed near the river bank -- then flew up to a perch about 15 to 20 feet up in a tree.  Stay tuned for additional information on NX as we begin to receive data from her GPS transmitter. Photo by Jim Deal:   photos by Bob Mislan: Video of NX's release.