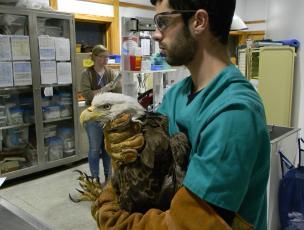 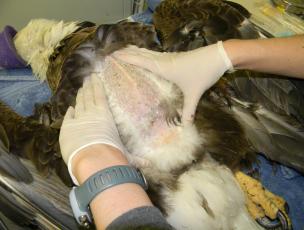 When it rains, it pours -- on March 9, the Wildlife Center admitted a Bald Eagle from King George County. This was the second eagle to arrive at the Center within the span of two hours! Unable to fly, the eagle was picked up by a conservation police officer on March 9 and taken to the Hartwood Animal Hospital in Fredericksburg. The bird was quickly transferred to permitted wildlife rehabilitator Randi Brooks, who called the Wildlife Center. Thanks to transporter Heidi Krofft, the eagle made it to the Wildlife Center within the same day to begin treatment. Dr. Kelly Flaminio examined the bird and found it to be thin and dehydrated. She also found that the bird's left elbow was extremely swollen and very painful to the bird. The bird tested at the sub-clinical level for lead (requiring no treatment). Pain medications, fluids, and anti-inflammatories were given. The eagle also has a large brood patch on its stomach, extending up to the keel. On March 10, the bird was anesthesized for radiographs and a closer inspection of the swollen elbow. Fortunately, the joint doesn't appear to be infected, though a large hole was discovered on the back side of the bird's wing. Dr. Kelly debrided the dead tissue surrounding the wound and found exposed bone; the bone appears to be healthy. This sort of injury will require a lot of management to keep the wound clean and healing. The full extension of the bird's wing could also be compromised, though at this point, it's too early to tell. The eagle will be housed in the Center's holding room while it begins to heal.

For the past four days, Dr. Kelly has been aggressively treating Bald Eagle #11-0137's wing injury. By surgically debriding the wound each day, she has been able to remove the dead, necrotic tissue around the open wound. In turn, healthy tissue has  slowly started to grow. The Bald Eagle's wing remains bandaged and the bird is receiving pain medications, anti-inflammatories, and several antibiotics. One more day of surgical debridement is planned; then treatment will change to an ointment to promote granulation tissue (a product of healing with major wounds).

During the week of March 14, the veterinary team continued to clean  and treat the eagle’s wing injury. During the weekend of March 19-20, Dr. Miranda found that the joint capsule in the bird’s injured elbow had been injured as well. Additional antibiotics were started while Dr. Miranda continued to manage the large wound. Another set of radiographs were taken on March 22. Unfortunately, these confirmed that the eagle’s joint space was infected – a condition that could not be successfully treated. The veterinary team decided to humanely euthanize this eagle.

Your special donation will help the Center to provide state-of-the-art medical care to this Bald Eagle … and to the 2,200+ other patients the Center will admit this year. Please help!