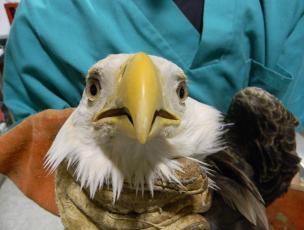 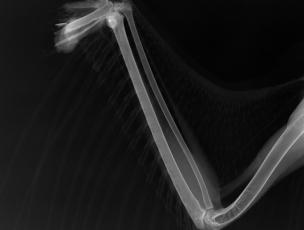 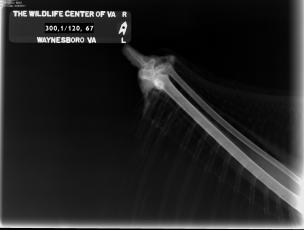 In the wee hours of the morning on March 22, an injured adult Bald Eagle was admitted to the Wildlife Center. The bird had been spotted for several days at a landfill in King & Queen County. The eagle was unable to fly; Conservation Police Officer Dwayne Dunlevy was able to capture it on March 21. He took the eagle to permitted wildlife rehabilitator Sarah Streetman, who in turn called the Wildlife Center and arranged for transport. Dr. Miranda Sadar met the transporter at the Wildlife Center around midnight on March 22 to admit the eagle. The eagle was bright and alert upon admission, but very thin. Its right wing was seriously injured -- the tip of the right wing had been severed. In addition to the soft tissue injury, the tip of the bone in the wing was exposed and necrotic. The eagle also tested positive for lead. A course of antibiotics, anti-inflammatories, pain medications, and treatment for lead toxicity were all started. On March 23, radiographs were taken to further evaluate the Bald Eagle's injury. Dr. Miranda was pleased to find that, despite the severity of the injury, the joint did not appear affected. Surgery is tentatively planned for Monday, March 28 to clean up the wound and to amputate the exposed bone. If all goes well, the Center will look for placement of this Bald Eagle as an educational ambassador. In the meantime, the eagle is eating with gusto; Dr. Miranda would like to see the bird put on weight prior to surgery.

Drs. Miranda Sadar and Kelly Flamino took Bald Eagle #11-0165 to surgery on March 28 to amputate the end of the exposed wing bone. Surgery went well, though the eagle took a long time to recover from the anesthesia. Post-surgical radiographs were taken. After spending the night in the Center's critical care chamber, the eagle appeared alert and was moved back into the Center's holding room. The Bald Eagle will be wearing a body wrap for the next week to decrease movement in the injured wing. Blood was drawn again on March 29 for another lead test. Lead levels are still  high; another round of chelation therapy will be performed.

Bald Eagle #11-0165 continues to heal well post-surgery; there is now only mild bruising on the injured wing. A repeat lead test on April 5 revealed that lead levels were greatly decreased. The eagle will continue to wear a body wrap for the next week; Dr. Miranda doesn't want to take any chances that the bird will injure the surgical site on its wing while its housed inside. Once the course of antibiotics are complete early next week, the Bald Eagle will move to an outdoor pen.

On April 17, Bald Eagle #11-0165 was moved into a small outdoor enclosure.  The end of the eagle's wing remained lightly bandaged. Norfolk Botanical Garden eaglets could use another role model -- so this eagle will likely fill that role once the pen is repaired this weekend.

Bald Eagle #11-0165 has continued to "hang out" at the Wildlife Center for the past several months -- but should be going to Maymont in Richmond, Virginia within the next couple of months. The Wildlife Center has placed several non-releasable animals at Maymont in the past few years. This eagle will be a part of their Bald Eagle habitat.

Maymont's permit for Bald Eagle #11-1065 have come in -- and a staff member from Maymont plans on picking up the eagle on January 26. After a 30-day quarantine period, the eagle will be on display with another resident Bald Eagle!

Bald Eagle #11-0165 was picked up today by the Maymont staff!  The eagle will be indoors for a 30-day quarantine period, and then will be out on exhibit.

Your special donation will help the Center to provide state-of-the-art medical care to this Bald Eagle … and to the 2,200+ other patients the Center will admit this year. Please help!