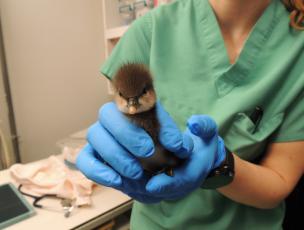 On May 9, a homeowner in Rockingham County saw a hawk flying over her backyard – with a duckling in its talons. The hawk dropped the young chick as it flew over the backyard and the homeowner was able to rescue the ducking. The bird was admitted to the Wildlife Center the following day.

The duckling was identified as a young Hooded Merganser, a water bird that breeds in forested wetlands. These diving ducks eat a variety of small fish, aquatic insects and vegetation, crustaceans, amphibians, and mollusks. The adults are easily identified with their dramatically “oversized” head; both males and females have crests that can be raised or lowered. 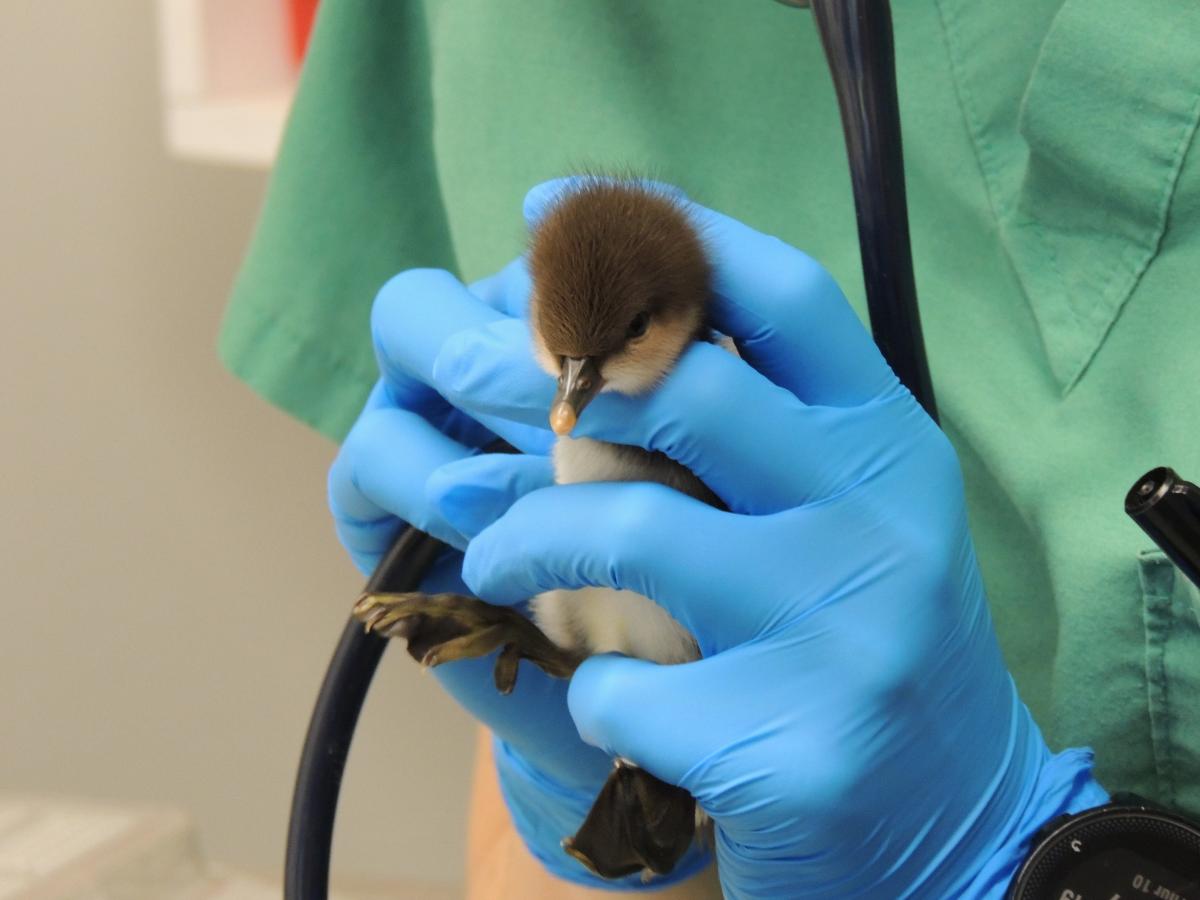 Despite this young merganser’s early trauma, the veterinary team didn’t find any injuries, and the young duckling was declared healthy. Wildlife rehabilitator Brie was ecstatic to care for a baby merganser; Brie is a well-known “bird nerd” among the staff, and this is her first merganser patient in her seven years working in the rehabilitation field.

The young duckling was placed in an incubator, then Brie started the process of duck match-making. It’s important for young wildlife to grow up with a sibling – even if that sibling is introduced! With some of the less common bird species admitted, wildlife rehabilitators often pair up babies of different species. In this case, Brie started off by pairing the merganser with a Mallard duckling, though mallards grow notoriously quickly, so Brie knew this wouldn’t be a good long-term match. In the past week, Brie found a Wood Duckling buddy [patient #18-0958] for the merganser; these two birds are not only good company for each other, but are also a better dietary match, with similar protein requirements.

The two ducklings have short swimming sessions several times a day. When they are older and larger, they’ll be moved to the Center’s aviary.

Your special donation will help the Center provide specialized medical care to this baby duck  ... and to the other 2,500+ patients that the Center will treat this year.

On the morning of July 30, rehabilitator Brie and rehabilitation intern Shannon released the young Hooded Merganser and Wood Duck pair. The two birds were released together at Lake Shenandoah; the merganser was found nearby and Brie suspects this lake is likely where she came from. 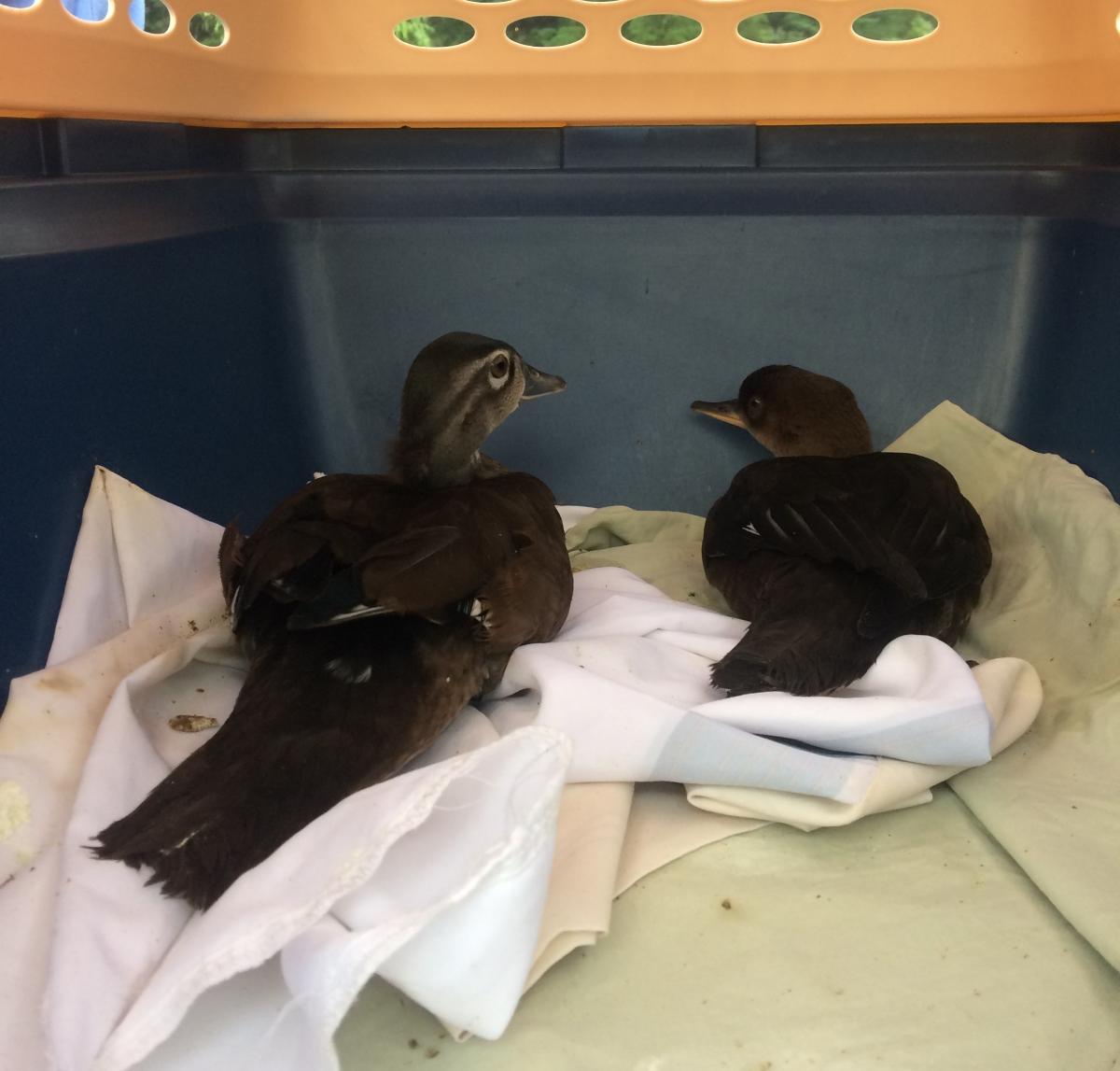 The birds were resistant at first to leave the crate, but once Brie removed the top of the crate, the birds flew off together beautifully.

Hooded Merganser #18-0742 and Wood Duck #18-0958 have been doing well in the Center’s aviary – they are growing quickly and are nearing release time! The ducks are eating well, though wildlife rehabilitator Brie noted that within the past week, both have been losing weight. The veterinary technicians ran a fecal examination on the two ducks and found a moderate parasite load; the ducks were prescribed a seven-day course of anti-parasitics.

The last dose of medication will be on July 29; if all goes well, wildlife rehabilitators Brie and Shannon will plan for a sunrise release on July 30. 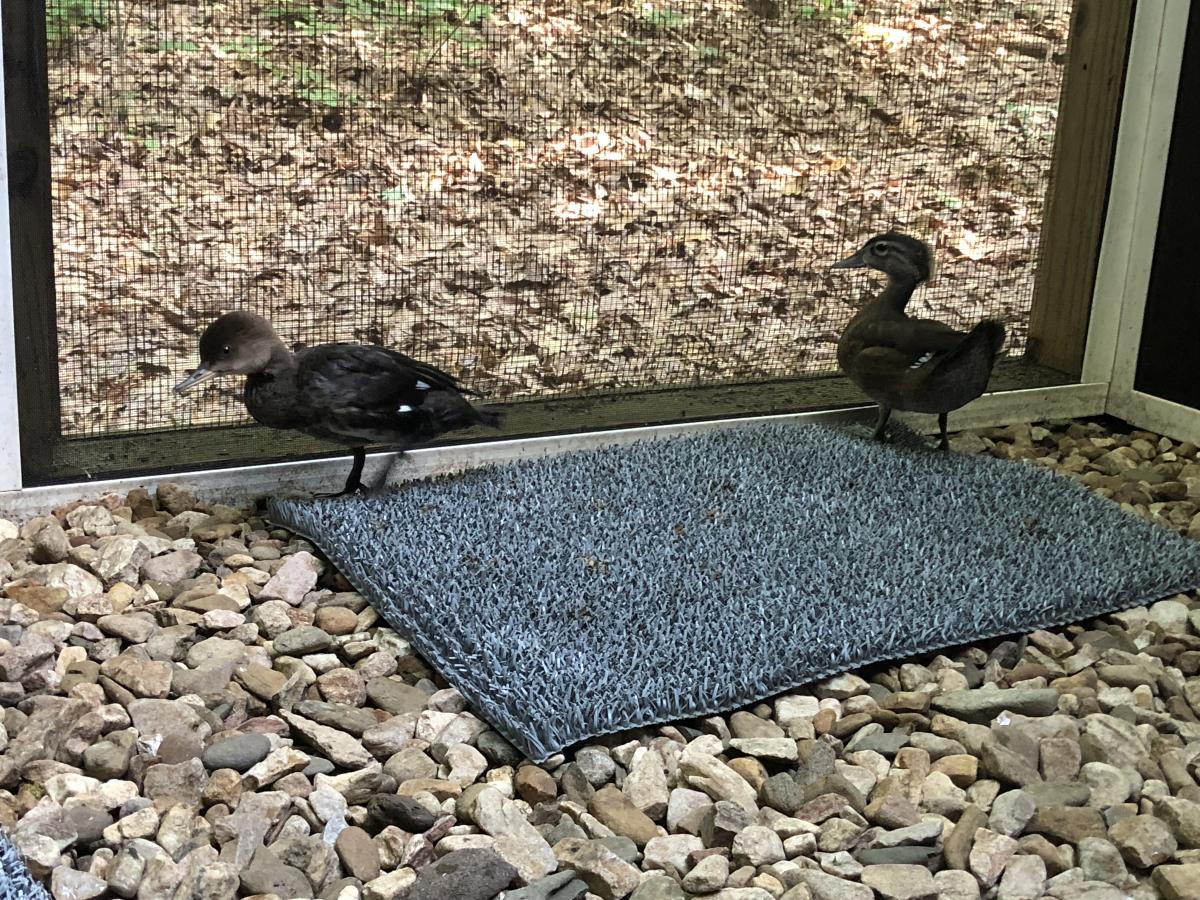 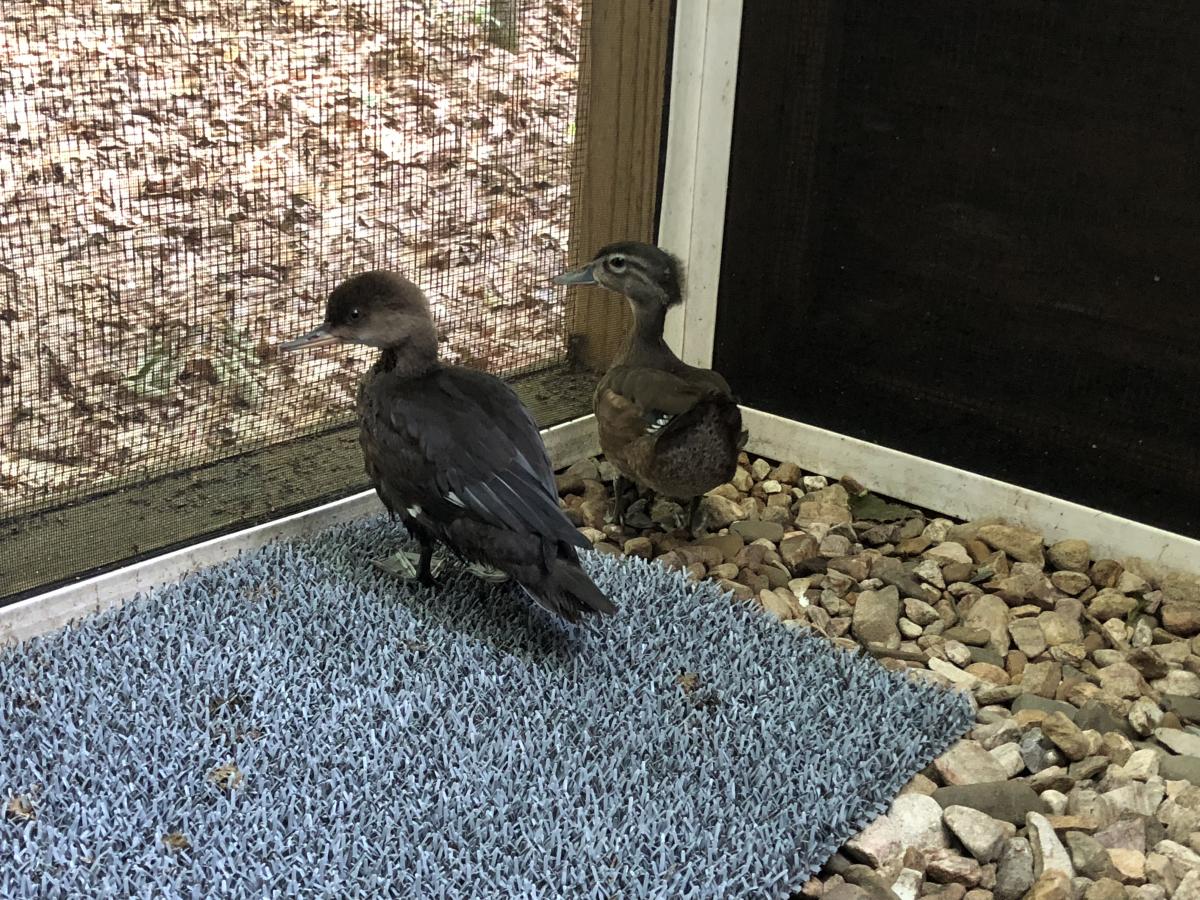 On June 7, rehabilitator Brie moved the Hooded Merganser duckling #18-0742 and Wood Duckling #18-0958 into a waterfowl rearing tub in one of the Center’s outdoor enclosures. The tub allowed the ducklings to swim freely and more frequently.

After spending ten days in the waterfowl rearing tub, the ducklings were moved into an Aviary enclosure with a permanent swimming tub on June 18. They can now explore the larger space and swim in deeper water. Rehabilitator Brie reported that the first thing the merganser duckling did when placed in the deeper was dive under water and scope for food. 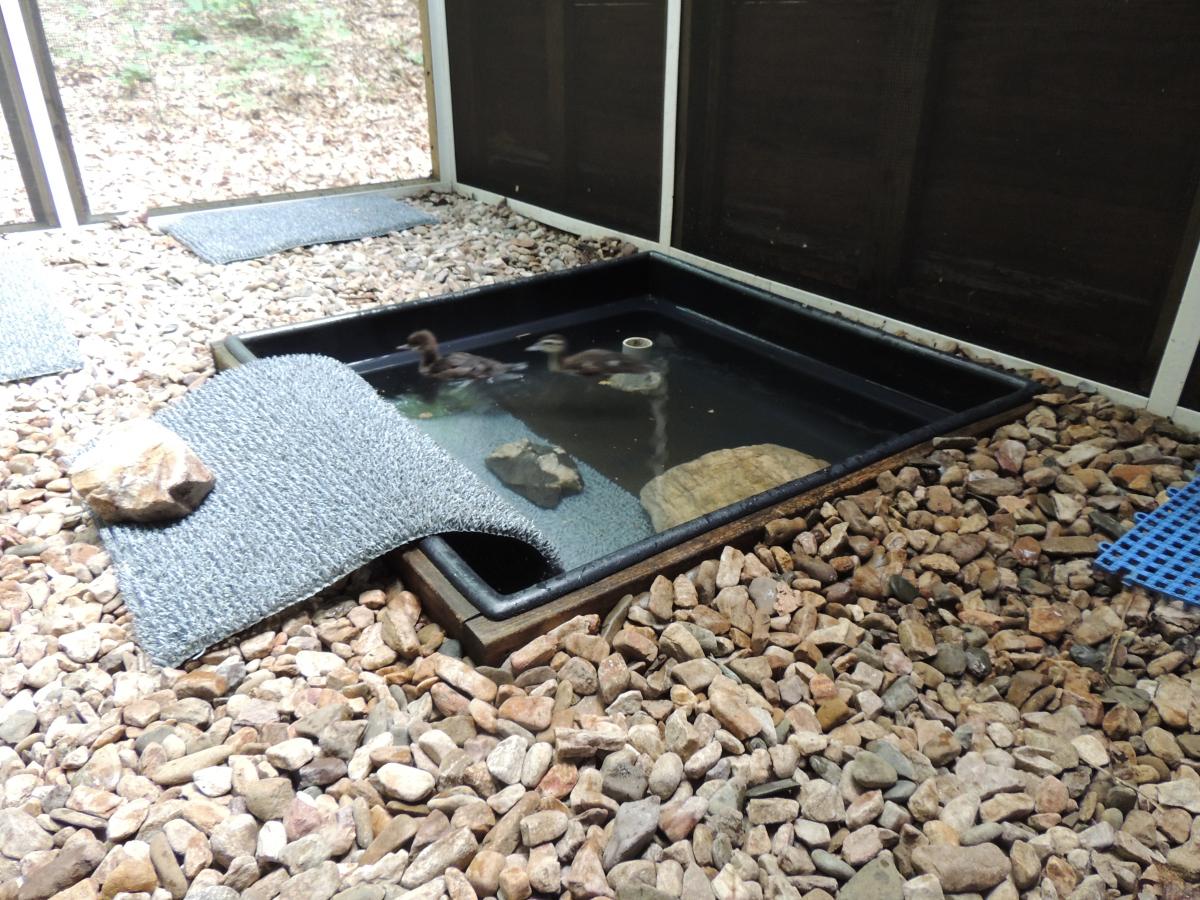 The rehabilitation staff is offering the merganser duckling live prey (tadpoles) in the pool, allowing the young bird to practice the hunting skills it will need in the wild. When the ducklings are slightly older and larger, the staff will offer bigger minnows and silversides. Both ducklings are getting a specialized waterfowl meal, with mealworms and greens. The Wood Duckling is eating fruit in addition to the waterfowl meal, and when the duckling is slightly larger, the staff will offer acorns.

The Hooded Merganser will need to remain in the Center’s care for several more weeks, as this species would typically fledge and leave their mothers when they are approximately ten weeks old. Wood Ducklings normally fledge between six to eight weeks old, but because the Wood Duckling was admitted at a younger age than the merganser, the two should be ready for release around the same time. The plan is to release the two ducklings together this summer.

Hooded Merganser duckling #18-0742 has been doing well and growing; the duckling continues to gain weight and is now 125 grams. When the duckling’s buddy [Wood Duckling #18-0958] reaches 100 grams, the two ducklings will be moved to a waterfowl rearing tub in the outdoor aviary, where they can spend more time swimming.

Hooded Merganser #18-0742 is doing well; since being paired with its new Wood Duck friend [patient #18-0958], the little duckling has gained weight and is now 57 grams [increased from admission weight of 26 grams!]. The pair enjoys several short swim sessions each day; we managed to catch one recent swim on video!