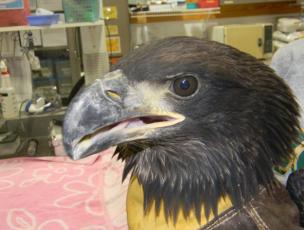 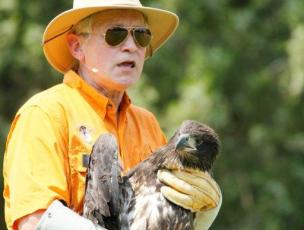 On June 3, a young Bald Eagle was found in a field in Hampton, Virginia.  Rehabilitator Lisa Barlow of Wildlife Response, Inc., rescued the bird and found it to be very thin.  On June 9, the eagle was admitted to the Wildlife Center. WCV vets examined the bird and took blood for an emergency panel -- a diagnostic test for blood.  While protein levels in the blood were within normal limits at this point, the young eagle's red blood cell count is low.  Dr. Miranda Sadar also found a small soft-tissue lump in or around the bird's crop.  Since the lump feels "attached", she doesn't believe it's food -- but at this point, Dr. Miranda did not want to perform diagnostic tests until the eagle is more stable.  The lump will be monitored in the days to come. Bald Eagle #11-1235 also tested positive for lead -- not at a high enough level to treat [0.038 ppm], but this will be monitored.  The bird received fluids, vitamins, and iron for the low red blood cell count.  Once the bird is more stable, radiographs will be performed.

Bald Eagle #11-1235 appears bright and alert today.  The veterinary team is beginning a tube-feeding diet for this young Bald Eagle -- a diet that will be easily digested so that the eagle's digestive system has some time to recover from the emaciation.  This eagle will be housed indoors for at least the next week as it recovers.

For the past few days, Bald Eagle #11-1235 has been eating whole foods -- chopped goose meat and rats.   The blood work that was taken and analyzed on June 17 showed signs of improvement.  Best of all, Dr. Miranda is no longer able to feel the small lump that was in the bird's crop.  This lump was likely just a small bit of dried food that was stuck in the crop for a couple of days. On June 20, the eagle was strong enough to be anesthetized for a quick radiograph session.  After the thumbs up from Dr. Miranda, the bird was moved to a small outdoor enclosure.   The eaglet is gaining weight and will continue to be monitored in the outdoor pen.

The young Hampton eagle was moved to flight pen A-2 today -- joining Virginia Beach eagle "KS" and the young bird from Maryland.  The Hampton bird has been very feisty for the past few days -- and has been chowing down heartily after recovering from his emaciation.  Dr. Miranda reported that when #11-1235 was added to the flight pen, he flew the length of the pen and landed on the swinging perch in between KS and #11--1170.  Apparently, he leaned over to "greet" KS and was instead distracted by the temporary identification band that was placed around his ankle.  This provided a few minutes of entertainment before the young eagle settled in. The new three-some will be monitored, and of course, plenty of food will be provided to all!

Bald Eagle #11-1235 is doing well, along with eagle friends #1234 [KS] and Maryland eagle #1170.  On the July 12 weigh-in and feather check, the team found that #1235 has gained a good bit of weight since arriving at the Center in thin condition.  Weighing in at 4.16 kg, this bird is certainly not emaciated anymore.  Feather checks and blood work were also good.  Dr. Miranda reports that all three young eagles are flying very well.

After another round of blood work and additional flight monitoring, Center veterinarians determined that the Hampton Bald Eagle was ready for release.  Since a large-scale eagle release was already planned for July 27 at Berkeley Plantation, the Hampton bird "tagged along" and was actually the first of five eagles released that day.  Prior to release, the Bald Eagle was banded with both federal and state bands ["05"].  Wildlife Center President Ed Clark had the honors of releasing this young bird.  Once released in the garden at Berkeley, the bird took a u-turn and flew over the treetops to a tree in an adjacent field. Your special donation will help the Center to provide state-of-the-art medical care to this Bald Eagle … and to the 2,300+ other patients the Center will admit this year.  Please help!