On August 20, Great Horned Owl #18-2502 was admitted from Bath County, Virginia; the circumstances around the owl’s rescue were not clear, but the bird presented weak and malodorous with damp and tattered feathers. The owl was also dull and in poor body condition; it had likely been suffering from an illness or injury that hindered its ability to hunt and capture food.

Radiographs were unremarkable, but an eye examination revealed ulcers in both eyes. During the initial examination, the veterinary team discovered that the owl was infested with parasitic flat flies; these parasites could account for the mild anemia revealed in the initial blood work. 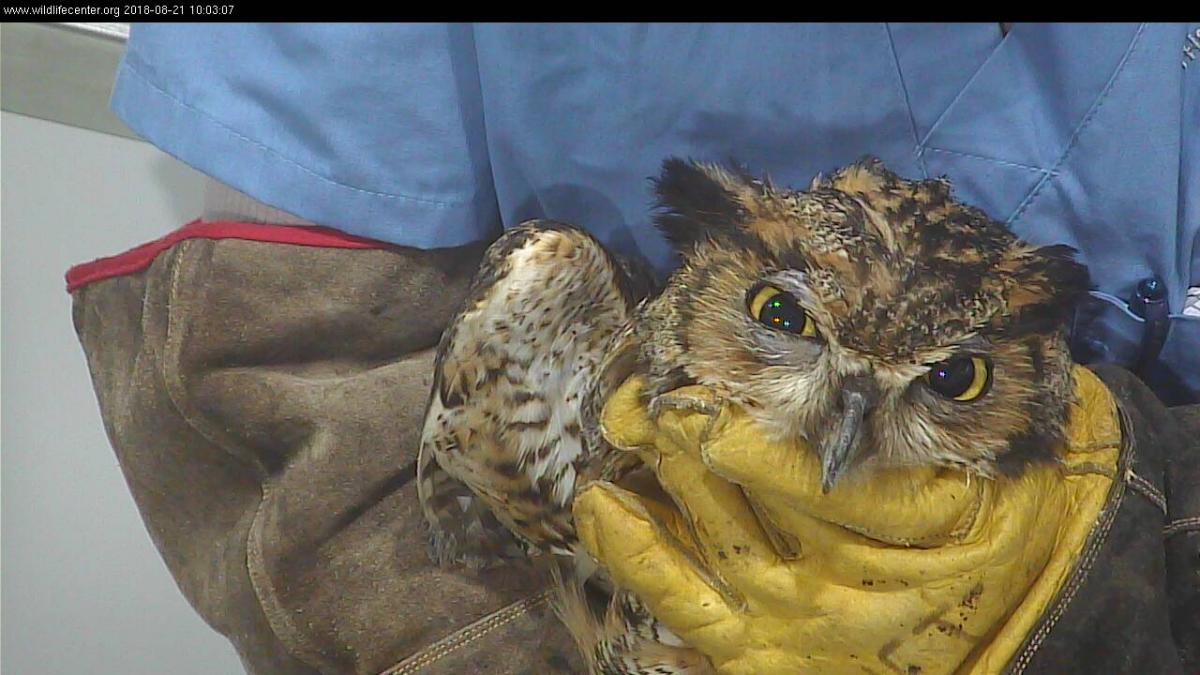 The owl was examined and treated on the Center’s live-streaming Hospital Cam the day after admission. The veterinary team treated the owl with topical and oral anti-parasitic medications to treat the flat fly infestation.

Initially, the team identified a potential cause of illness as an infectious disease such as West Nile Virus; the treatment plan included administering fluids and monitoring the owl’s neurologic status during the first few days following admission. During the next week, the owl did not display any neurologic symptoms, making a diagnosis of West Nile Virus unlikely.

Blood work repeated on August 25 showed that the owl was infected with hemoparasites [parasites in the blood] that could have been transmitted by the flat fly infestation. These parasites are also treated with oral anti-parasitic; the owl will receive the medication in its meals through September 12.

The owl became brighter and more active since admission and the bird has a healthy appetite. The owl’s eye ulcers resolved, but the veterinary team will continue to monitor the owl’s right eye for potential injury to the retina.

On August 27, they moved the bird to an outdoor flight pen; this will decrease the bird’s stress by being further removed from humans. The veterinary team will continue to monitor the owl’s appetite and attitude. Blood work will be repeated at the end of September.

Your donation will help provide care to this owl -- and the 2,700 other patients the Wildlife Center will treat this year.

Great Horned Owl #18-2502 has continued to do well during daily exercise, and the staff report that the owl flies silently in the larger space – as expected. By October 25, the owl successfully passed five nights of live-prey testing. If final blood work is within normal limits, the owl will  be released within the next several days.

Great Horned Owl #18-2502 has been doing well during daily exercise in the outdoor flight pen, flying end to end in the enclosure for more than 10 passes. The owl is relatively quiet while flying, but not completely silent; flying silently is a prerequisite for release in our owl patients. The rehabilitation team believes that exercising the owl in a larger enclosure will demonstrate the bird’s ability to fly silently; in the next few days, they will move the owl to one of the largest flight pens for continued exercise and assessment.

During the past month, Great Horned Owl #18-2502 has done well in the small outdoor pen. The owl has had a strong appetite and was moving around the space normally.

On September 20, the rehabilitation team moved the owl to a larger flight pen to begin daily flight conditioning. Once the owl is consistently flying well, the staff will put the owl through “mouse school” to test its ability to hunt prey.