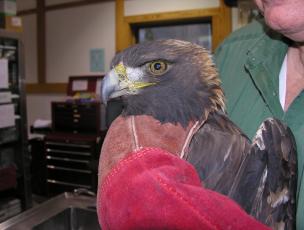 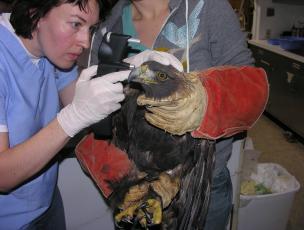 On Tuesday, January 11, the Wildlife Center received its first eagle patient of the year -- a Golden Eagle from Craig County, Virginia. The eagle was found with its toe caught in a foothold trap and was rescued by Conservation Police Officer J.W. Koloda on January 9. Officer Koloda brought the bird to permitted wildlife rehabilitator Gwenn Johnston, who brought the eagle to the Wildlife Center the following day.

The Golden Eagle's third toe on its right foot has an old, necrotic fracture that is down to the bone. In addition, the veterinary team found a superficial wound on the left side of the bird's beak; however, the underlying bone is stable and intact.  Preliminary bloodwork revealed that the Golden Eagle is extremely anemic.

Once the bird's bloodwork is more stable, radiographs of the foot will be taken and surgery will be scheduled. The veterinary team should be able to safely amputate the end of the toe, with no long-term ill effects to the bird. In the meantime, the eagle is quiet but alert and is receiving pain medications, anti-inflammatories, and antibiotics in addition to an iron injection to treat the anemia.

Golden Eagles are more commonly found in the western United States and Canada and are typically only winter visitors to Virginia. While Golden Eagles are uncommon patients at the Center, it’s not uncommon for them to get caught in a foothold trap. In addition to 11-0017, Golden Eagles admitted to the Center in 2006 and 2009 were rescued from these traps. Golden Eagles can sometimes be mistaken for juvenile Bald Eagles. One identifying characteristic is the feathering on their legs down to their toes, while a Bald Eagle's lower legs are bare.

Additional blood tests have been performed on the Golden Eagle to re-check the anemia as well as the bird's production of red blood cells. While the eagle is improving, the blood work is still not where the vets would like to see it--meaning the Golden Eagle is still anemic. Radiographs were taken on January 17 to get a closer look at the bird's foot. While the bone end of the third toe is dead and will need to be amputated, the healthy bone still appears healthy on the radiographs. An additional blood test is scheduled for January 20. If all looks good, surgery will likely be scheduled for the end of the week.

Additional blood tests on January 20 showed that the Golden Eagle’s red blood cell count were still at the same level as earlier in the week. Despite the lack of change, waiting any longer might have put the eagle at an increased risk for infection, so the Center’s veterinary team decided to go ahead with surgery on January 21. The procedure lasted just under an hour; Dr. Miranda amputated the end of the middle toe on the bird's right foot and sutured the wound closed. The bird received pain medications as well as hetastarch--a special fluid to help compensate for the blood loss during surgery.

After the Golden Eagle woke up, it spent the night in the critical care chamber. On Saturday, January 22, it was moved back into a regular eagle crate in the Center's holding room. At this point, the biggest challenge is to get the Golden Eagle to eat on its own—something it has not done yet at the Center.

On January 21, just as Golden Eagle #11-0017 was coming out of surgery, another Golden Eagle was admitted from Craig County—caught in the same foothold trap. Unfortunately, this new Golden Eagle was much more badly injured than the first; its left leg and right hallux (back toe) were both broken. With the combination and nature of the two injuries, the eagle had to be euthanized. The Conservation Police Officer who brought in both Golden Eagles says that the trap was set by a landowner to catch coyotes and at this point, is no longer set.

The Golden Eagle was moved to a small outdoor enclosure on January 25 in hopes that a change in scenery would convince it to eat on its own. No such luck yet, but the staff is hopeful that the eagle will be tempted soon by a variety of food choices. In the meantime, the eagle is being hand fed. On January 27, additional blood work was analyzed. Preliminary results show that the bird's red blood cell count continues to slowly rise, which is a good sign. The Golden Eagle's surgical incision on its toe is healing well, though it is a bit swollen.

On January 31, the Golden Eagle was moved to one of the Center's largest flight pens, in hopes that the extra space would encourage it to eat. Unfortunately, there still hasn't been any luck with getting the bird to eat on its own. The staff continue to hand feed the eagle every day. The good news is that the incision on the bird's toe has healed well. Repeat blood work on February 4 also indicated the the Golden Eagle is doing well; there were no signs of infection, and the red blood cell count continues to improve.

With a completely healed toe and excellent flights in the Center's largest flight pen, this Golden Eagle has been cleared for release on February 16.