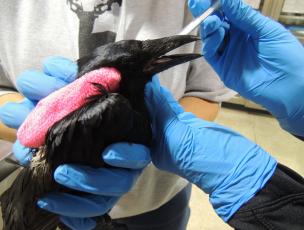 A Fish Crow was admitted to the Wildlife Center on November 26 as patient #16-2468. Fish Crows are similar to American Crows in appearance and behavior, but are typically smaller in size. Like American Crows they are very social birds, forming large flocks in winter months. Fish Crows have a more limited range than American Crows; they can be found mainly along the east coast of the United States.

Fish Crow #16-2468 was first rescued on November 23 in Newport News, Virginia, after it was attacked by a cat; the crow was dropped off at a veterinary clinic and was transferred to a wildlife rehabilitator in the area. A volunteer transporter brought the crow to the Wildlife Center for continued treatment.

During the initial exam at the Wildlife Center, the crow was quiet, and radiographs showed a fractured humerus in the right wing. Though the crow was attacked by a cat, veterinary intern Dr. Peach believes the wing fracture was caused by a prior incident, possibly a collision with a car or window. With an injured wing, the crow was vulnerable to an attack by the cat.

The crow's right wing was wrapped to stabilize the fracture, and the bird was given pain medication and an anti-inflammatory. The wing was fractured in multiple fragments, meaning that surgical repair would be necessary and could be complicated.

Dr. Peach performed surgery on November 28, placing an intramedullary pin and an external fixator to stabilize the fractured wing. The vet staff monitored the surgical site for signs of severe inflammation or infection, cleaning the pin sites daily. The crow was consistently eating at least 50% of the offered meal each day.

By December 3, the veterinary staff began therapeutic laser therapy to assist with healing; on December 5 the staff began performing daily physical therapy to increase the crow's range of motion in the injured right wing. Physical therapy helps, in part, to prevent scar tissue development on the patagium -- the skin along the leading edge of the wing. 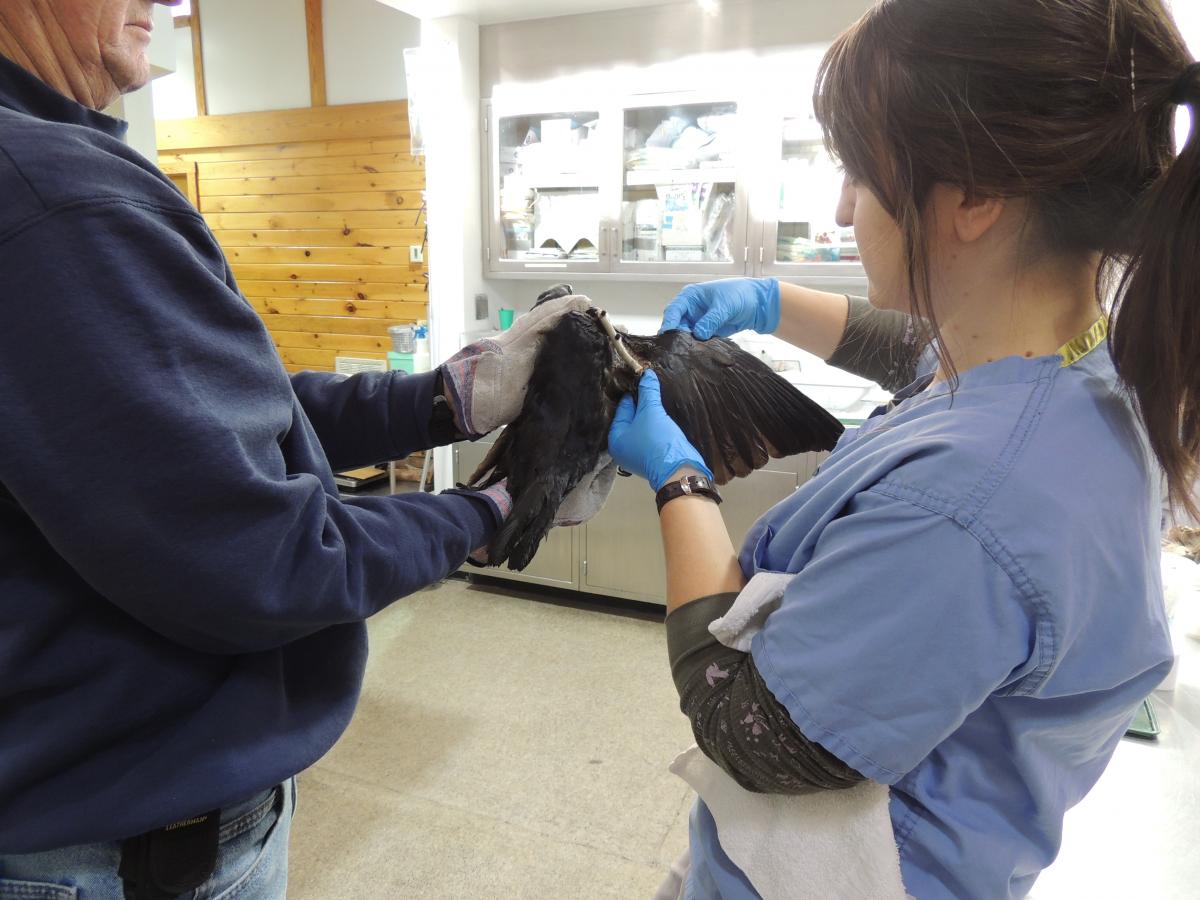 Radiographs on December 9 showed that the wing is healing well; Dr. Peach was able to visualize and palpate a callus forming at the fracture site, indicating positive progress. By December 12, the Fish Crow had at least 70% range of motion in the right wing. Radiographs are scheduled for December 19, at which time Dr. Peach will decide if it is appropriate to remove the external fixator from the crow's stabilizing hardware.

Until then, the crow will continue daily physical therapy and laser therapy, and the veterinary staff will monitor the bird's surgical site, attitude, and appetite.

Your special donation will help the Center to provide care to this crow ... and to the 2,500 sick, injured, and orphaned wild animals the Center will treat this year.

Fish Crow #16-2468 has continued to fly well during the past ten days. The bird's wing has healed and the patient is able to easily maneuver around its outdoor enclosure.

On February 13, the staff determined that the crow is ready to be released. The rehabilitator who initially stabilized the crow will release the bird near the rescue site in the Tidewater region of Virginia. A volunteer transporter will drive the bird from the Wildlife Center to the rehabilitator on February 14. Happy Valentine's Day, Fish Crow #16-2468! 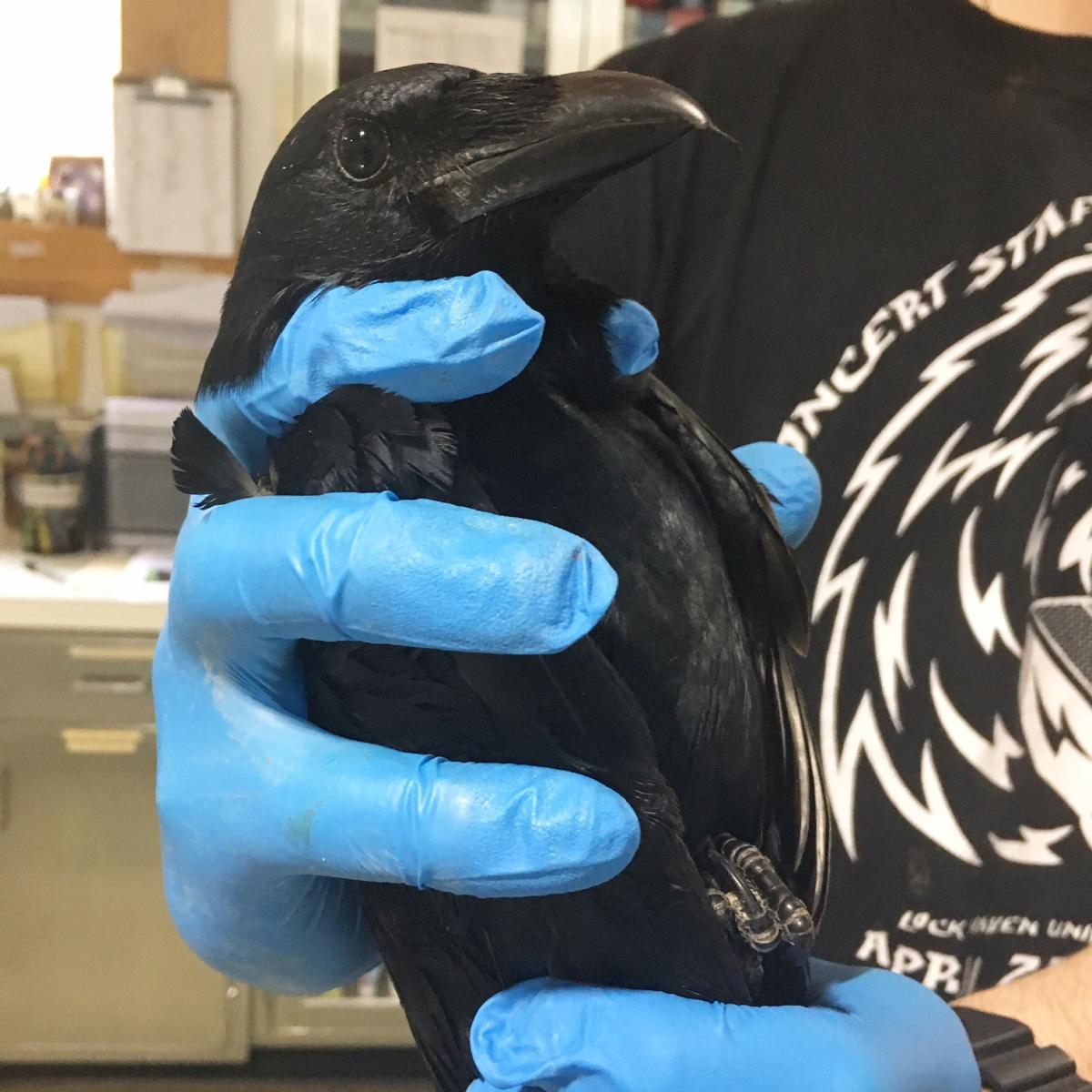 Fish Crow #16-2468 has been steadily improving during the past month. The crow was moved to the Center's outdoor aviary enclosure on January 10; initially, the bird was having difficulty maneuvering and flying around the enclosure and was also showing signs of discomfort and a wing droop.

However, after several weeks of living in the larger space, and with the rehabilitation staff exercising the crow daily, Dr. Peach noted that the bird was markedly improved during an exam on January 30. The bird is now able to fly from the ground to higher perches, and the crow's right wing is no longer noticeably drooping. Daily exercise has likely stretched the patagium (the skin along the wing) and strengthened the flight muscles.

The rehabilitation staff will continue exercising the crow, and the veterinary staff will check the crow's flight again on February 6.

During the past month, Fish Crow #16-2468 has been doing well; the crow has gained weight and the bird's fractured right wing is healing.

Radiographs of the wing on December 19 showed good progress with healing, and the connection between the IM pin and external hardware was cut. The following week on December 27, the IM pin was removed, and the vet staff continued physical therapy and laser therapy.

The crow's laser therapy session was featured on on Facebook Live on December 22.

Posted by Wildlife Center of Virginia on Thursday, December 22, 2016

The crow was moved to the Center's outdoor metal cage complex on December 29. By January 2, the remaining stabilizing hardware was removed from the crow's right wing and laser therapy was discontinued.

The crow will remain on cage-rest and continue to receive physical therapy until at least January 9; the crow is achieving 90% extension following physical therapy and the patagium does not seem tight. However, Dr. Ernesto is concerned about the length of the humerus bone in the right wing now that the fracture is healed. When the two fractured pieces of bone healed together, they were bridged by a "floating" fragment, which brought the two ends closer together than they were before and therefore shortened the length of the bone. A shortened bone could impede the function of the wing and may affect the crow's ability to fly. Recently, the crow has exhibited a right-wing droop in its cage, which could be a result of how the fracture healed.

When the Fish Crow is moved to a larger enclosure, the staff will be able to assess the bird's ability to fly and maneuver. Until then, they will continue to monitor the bird's progress during physical therapy.