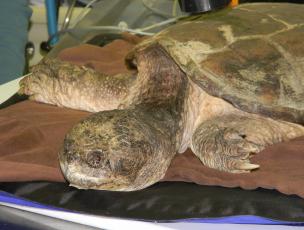 On October 5, a 16-pound Eastern Snapping Turtle was found on a road in Louisa, Virginia. The turtle’s rescuer picked it up and brought it to the Wildlife Center the following day, when it was admitted as patient #12-2438. 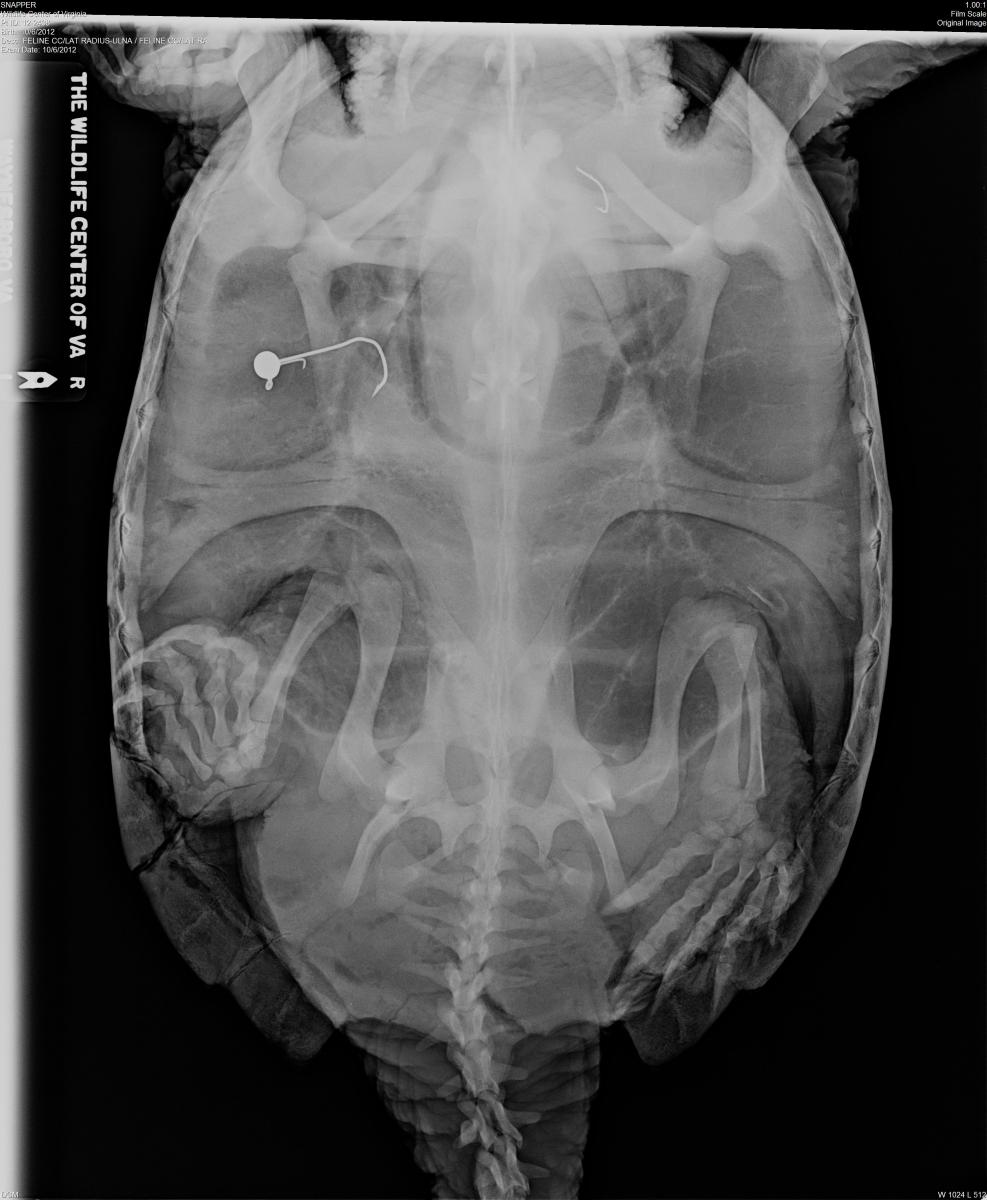 The veterinary team found that the large turtle had several carapace [upper shell] fractures. It’s typical Wildlife Center procedure to take radiographs of turtles with shell fractures – this allows the vets to assess how the fractures might have affected the turtle’s internal organs. When radiographs were taken on Snapping Turtle #12-2438, the team noted two fishing hooks in the turtle – one appeared to be in the turtle’s stomach, and the other was in the esophagus. While it didn’t appear that there were internal injuries due to the fractures, the veterinary team decided to take “contrast radiographs” to get a better picture of where the fish hooks were – and to see if they had caused any internal damage.

Contrast radiographs are a set of images that are taken after a special kind of iodine solution is ingested by the patient. The solution is safe for the patient and allows the team to 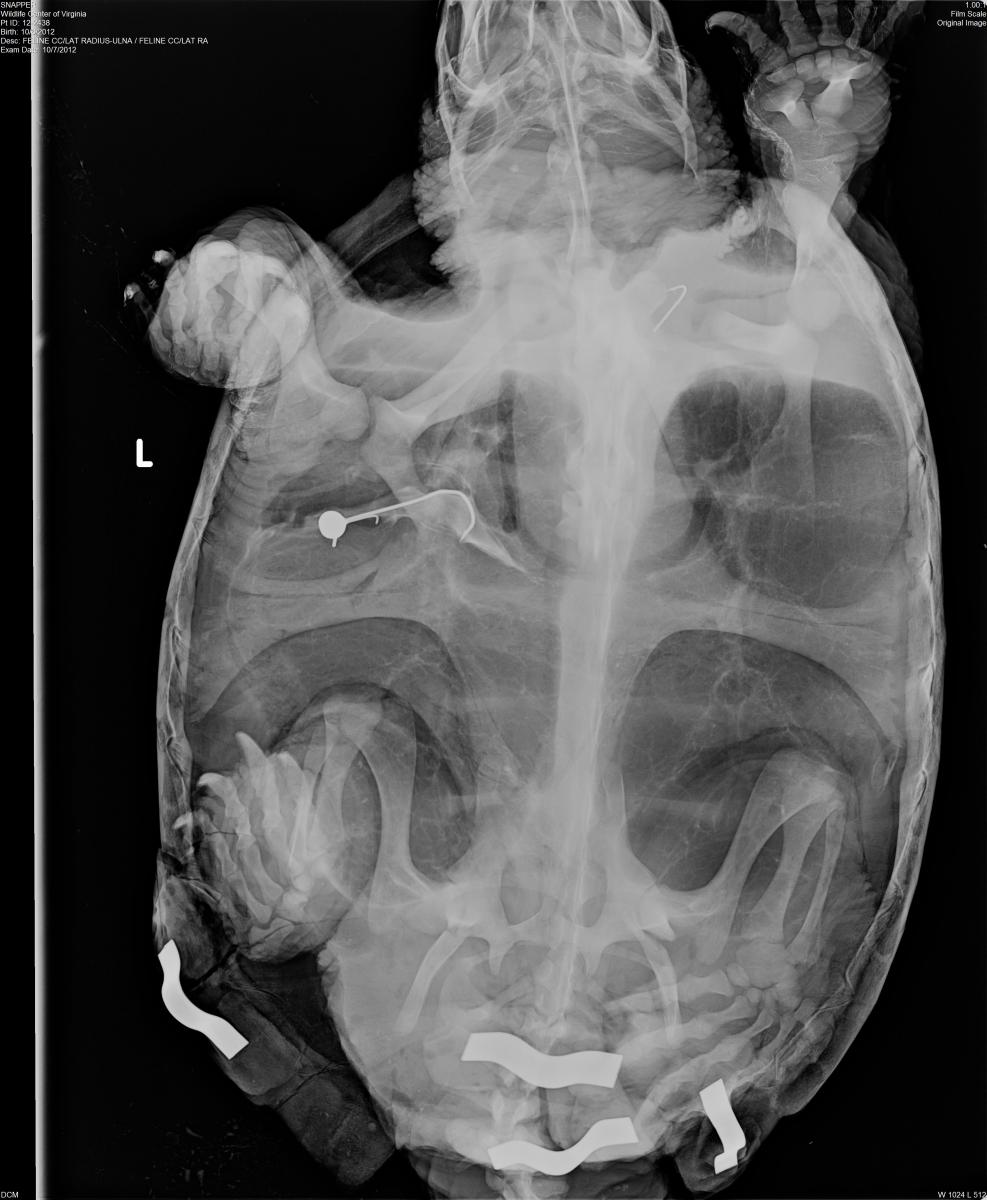 better see the gastrointestinal tract in the radiograph images. On the snapping turtle’s radiographs, no leakage was noted, meaning that the fish hook in the turtle’s stomach had not perforated any internal organs.   Although it appeared as though both hooks were embedded in the turtle and were not moving, the veterinary team felt it would likely be best to remove both hooks.

On October 12, the turtle was sedated so that Dr. Rich Sim, the Center’s veterinary fellow, could scope the turtle using the Center’s endoscope. By inserting a small camera into the turtle’s mouth, he was able to first see the hook that was in the turtle’s esophagus. When he continued to insert the long, flexible scope tube, he was also able to see the hook that was embedded in the turtle’s stomach.   This hook was actually a “jig” – a type of fishing lure with a lead sinker attached.   Ideally, Dr. Rich and team would be able to insert long graspers into the turtle’s esophagus and stomach to remove the hooks while using the endoscope to guide them – but in this case, both hooks were inaccessible with the Center’s tools.

On October 14, Dr. Rich took the turtle to surgery to remove both hooks – a more difficult procedure than using an endoscope. Dr. Rich made an incision in front of the turtle’s left hind leg, and was able to access the turtle’s stomach to remove the jig. This procedure was fairly straightforward, though surgery did take a couple of hours. Dr. Rich attempted to surgically remove the hook in the turtle’s esophagus – but due to some complications, including a very lengthy anesthesia period of three and a half hours – Dr. Rich decided to end the procedure and try a second attempt at a later date. 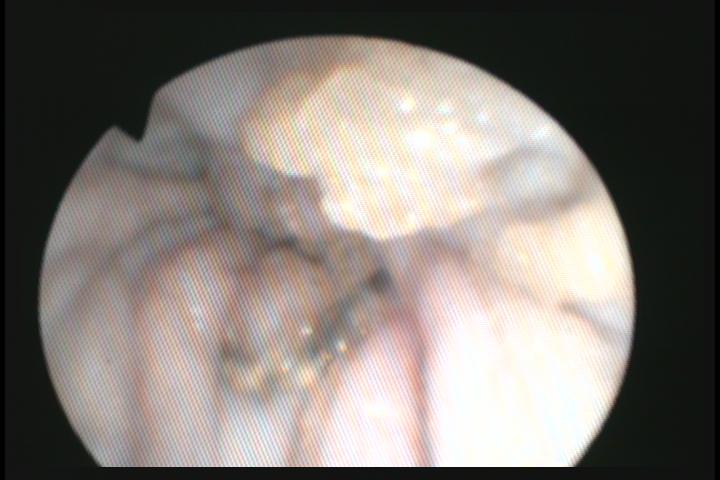 Over the next few weeks, the turtle healed quietly in the Center’s reptile room. In late November, it became clear that the Center was going to be able to purchase an endoscope adaptor, thanks to the generosity of those who contributed to the GN Reveal. When the adaptors arrived, Dr. Rich was successfully able to remove the second hook on December 11.

The snapping turtle will continue to heal over the winter in the Center’s Reptile Room. It should be able to be released in the spring of 2013.

Your special donation will help the Center to provide state-of-the-art medical care to this Eastern Snapping Turtle … and to the 2,600 other patients the Center will admit this year. Please help!

It’s been more than 190 days since Snapping Turtle #12-2438 was first admitted with multiple shell fractures and two fish hooks in its digestive tract -- and the turtle has been through multiple surgeries within that period. After a long recovery this winter, and with the arrival of spring, it’s time for the Snapping Turtle’s release!

While over-wintered Eastern Box Turtles patients stay at the Center until mid-May, aquatic turtles are typically released in April. Mid-to-late April is a very active time of year for Snapping Turtles – they emerge from hibernation and are ready for breeding season.

Snapping Turtle #13-2438 will need to be released in its home range. On Tuesday, April 16, a transporter will pick up the turtle from the Center and will release it back in the area from which it was rescued in Louisa County.

Eastern Snapping Turtle #12-2438 has been healing well in the Center’s warm and humid reptile room over the past month. After the vet staff removed the second fishing hook from the turtle's esophagus in mid-December, the turtle did not eat for a period of time, likely because of a sore throat!  At the end of December, the turtle began eating again.

The staff will continue to monitor the turtle through weekly “turtle checks” – on Thursdays, all of the Center’s turtles receive a cursory physical examination. Blood work is also analyzed once a month.