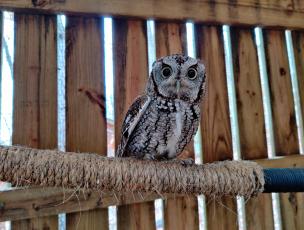 On December 6, a private citizen found an Eastern Screech-Owl standing in the road. The bird would not fly away but was able to be captured and transported to the Center.  They placed the owl in a box and brought it to the Center.

Upon initial examination, Dr. Sarah found that this bird was in good body condition, mildly dehydrated, and standing upright.  Radiographs were taken and did not show any significant fractures, but there was air in the body cavity which is common after a physically traumatic event, such as being hit by a car.  A blood test was done that showed an elevated level of lead within the bird’s system, which is unusual in owls and more common in birds who scavenge carrion.  Dr. Sarah assumes that likely the presence of lead in the bird's system, which often causes symptoms such as disorientation and incoordination, may have led to the bird being hit by a car or sustaining a similar trauma.

Dr. Sarah started the bird on fluid therapy, an anti-inflammatory medication, as well as lead chelation therapy to rid the bird’s system of the harmful toxin.

Since then, the bird has improved, and additional blood tests confirmed that the lead was removed from the owl's body stopped medications and the owl was moved to one of the Center’s B Pens, where it continues to eat well and has started daily exercise.

Your donation will help provide care to this Eastern Screech Owl -- and to more than 3,000 wild patients in need that will be admitted in 2021. Thank you!

Throughout late December and early January, Eastern Screech-Owl #20-3670 continued to improve its flight through daily exercise, and passed “mouse school”.  Mouse school tests a predatory bird’s ability to hunt before release.  Live mice are placed in a horse trough in the flight enclosure of a bird, and the recovering bird must "pass" by catching the mice for five nights in a row. This ensures that all young or injured animals are once again able to successfully hunt for their own food. e

Upon completion of mouse school and appropriate flight testing to make sure the owl was flying silently and without excessive effort, it was released on January 12.