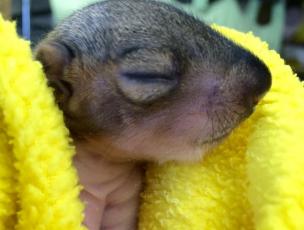 On February 28, the Wildlife Center of Virginia admitted the first infant Eastern Gray Squirrel of the season. Squirrels have two litters a year [one in late winter and the other in late summer]; baby squirrels are typically admitted after their nest tree is cut down or after they are displaced from their nests during a severe storm. Often young squirrels that are found are not orphans and can be easily re-nested and reunited with their mothers. A baby squirrel has the best chance of survival when it is cared for by its mother.

The first baby squirrel of 2016 was a young male that was found on the ground after his tree had been cut down. Rescuers kept him overnight and fed him puppy milk replacer before transporting the squirrel to the Center.

During the initial exam, Eastern Gray Squirrel #16-0080 was bright and alert. Dr. Dana noticed some mild bruising on the squirrel’s left foreleg, but observed that the squirrel was able to move and use all four of his legs properly. A single radiograph was taken and showed no signs of any broken bones or other abnormalities. The infant squirrel was then given anti-inflammatories, pain killers, and fluids before he was placed in an incubator in the Center’s ICU. The squirrel still had his eyes closed; the staff estimate the squirrel to be about three weeks old. Interim wildlife rehabilitator Kendra started the squirrel on a four times a day feeding schedule of a special milk replacement formula designed for squirrels.

The following morning, the squirrel was bright and alert, but had diarrhea – likely due to the puppy milk replacer that he was fed before arriving at the Center.

The veterinary staff plan to monitor and administer pain medications for four more days, and then will transfer Eastern Gray Squirrel #16-0080 to the Center’s rehabilitation team for supportive care. The young squirrel will likely stay at the Center until he is old enough to be on his own and will be released in the spring.

Your special donation will help the Center to provide care to this infant Eastern Gray Squirrel ... and to the 2,500 sick, injured, and orphaned wild animals the Center will treat this year.

Eastern Gray Squirrel #16-0080 was eating well in the days following his admission and appeared to be doing well. On the morning of March 2, Center staff noted that the young squirrel’s abdomen was distended and very swollen. Baby squirrels are regularly stimulated to urinate; the rehabilitation staff use a damp tissue before and after each feeding to ensure young squirrels urinate and defecate.

On the morning of March 2, the rehabilitation staff made many attempts to stimulate Eastern Gray Squirrel #16-0080 to urinate, but were unsuccessful. Dr. Helen carefully examined the infant squirrel and planned to ultrasound the squirrel’s bladder. Sadly, the young squirrel’s bladder ruptured and was humanely euthanized. The veterinary staff are unsure why the squirrel had a sudden and drastic problem; it’s possible that there were internal injuries that were undetected.