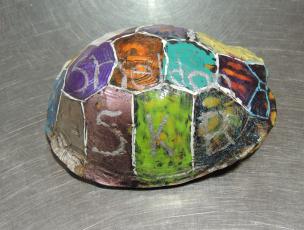 On June 7, staff members at Natural Chimneys Park and Campground found an adult Eastern Box Turtle. While this typically wouldn’t be unusual occurrence, this particular turtle was painted with several colors of bright fingernail polish and had the name “Sheldon” written on the carapace in silver glitter. The campground staff guessed that this was a discarded pet, and transported the turtle to the Wildlife Center.

Dr. Dana Tedesco examined the female turtle when it arrived. The turtle had an abscess on her left femur; Dr. Dana performed radiographs on the turtle to ensure that the abscess was not extending into the turtle’s coelomic cavity, or main body cavity. When examining the radiographs, Dr. Dana discovered that the turtle had five eggs.

The turtle’s leg wound was flushed and bandaged, and Dr. Dana started a course of pain medication. The box turtle was moved into an enclosure in the Center’s reptile room. In addition to managing the turtle’s wound, the staff will carefully scrub the turtle’s shell each day to begin to slowly remove the fingernail polish. The staff will give the turtle several days to lay her eggs; if she does not lay them in her enclosure, the veterinary staff will administer a medication that will induce egg-laying.

Box Turtle #13-1342 is non-releasable, because we are unsure where it was found, how long it was in captivity, and if it was housed with other turtles. The painted shell suggests that this turtle was kept as a pet for some time, and because it was taken from the wild and left at the campground, it can never be released.

The Wildlife Center encourages everyone to leave wild turtles in the wild.

Box Turtle in the News:

Eastern Box Turtle #13-1342 has been doing well over the past few months. Her left hind limb injury is completely healed, and the turtle looks more like her natural self – with only a little bit of fingernail polish remaining in between the scutes of her shell.

No information on the original location of the turtle was ever revealed, so the Wildlife Center began looking for education placement options. The staff didn’t have to look far – the turtle will be returning as an education animal to the Natural Chimneys Regional Park and Campground, where she was discovered in June. 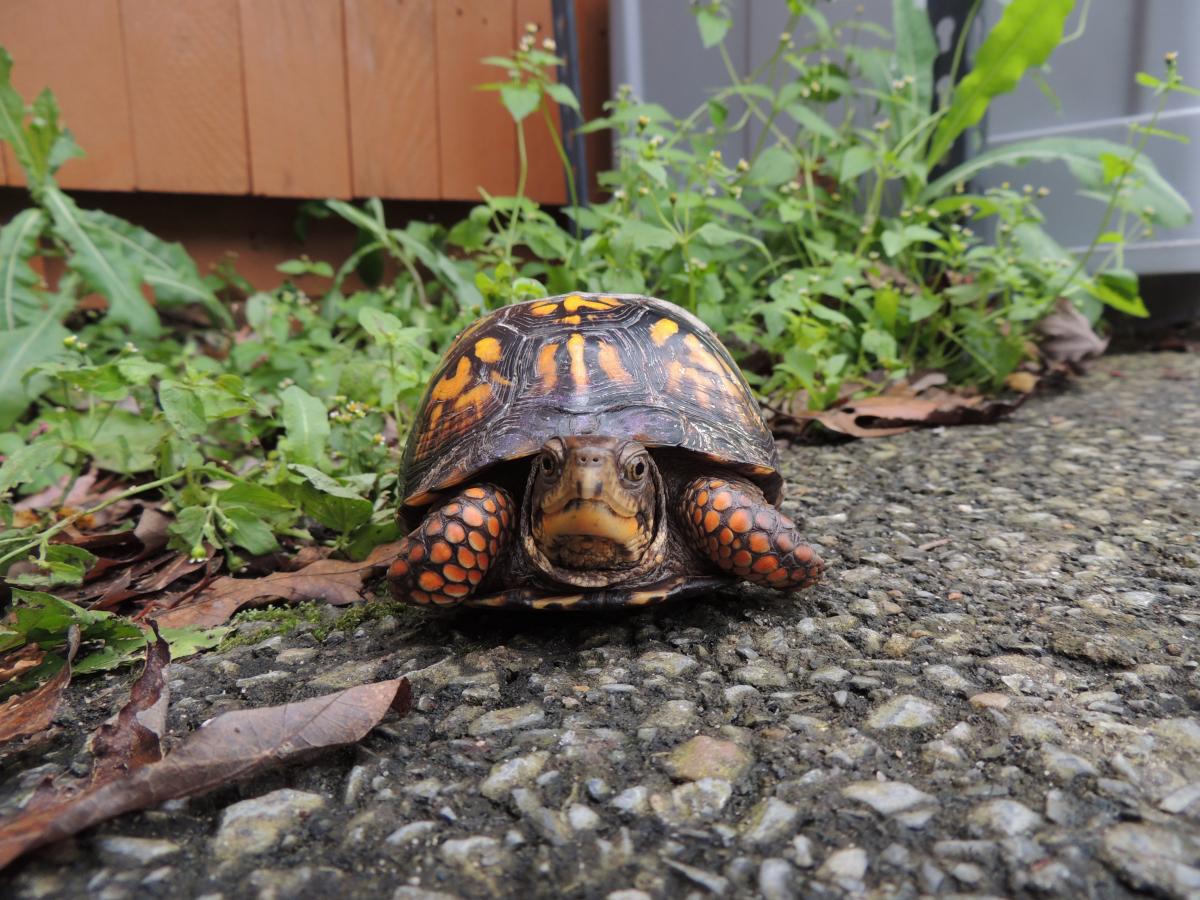 Eastern Box Turtle #13-1342 is looking more and more like herself with each passing week. Regular scrubbing of her shell has removed nearly all of the fingernail polish.

The turtle’s leg injury has been healing slowly; earlier this month, the veterinary team performed “contrast radiographs” to better visualize the depth of the fistula [abnormal connection between two cavities]. While the injury was deeper than the team originally thought, there was no need to alter the turtle’s treatment plan just yet. The veterinary staff continued to flush the leg wound each day, and applied a bandage which was also changed daily.

By July 20, the leg wound was healing well; the box turtle still requires daily monitoring, but the opening into the wound was nearly closed.

No information on the box turtle’s point of origin was ever discovered; once the turtle is fully healed, the staff will seek a permanent placement option for her at an educational facility. 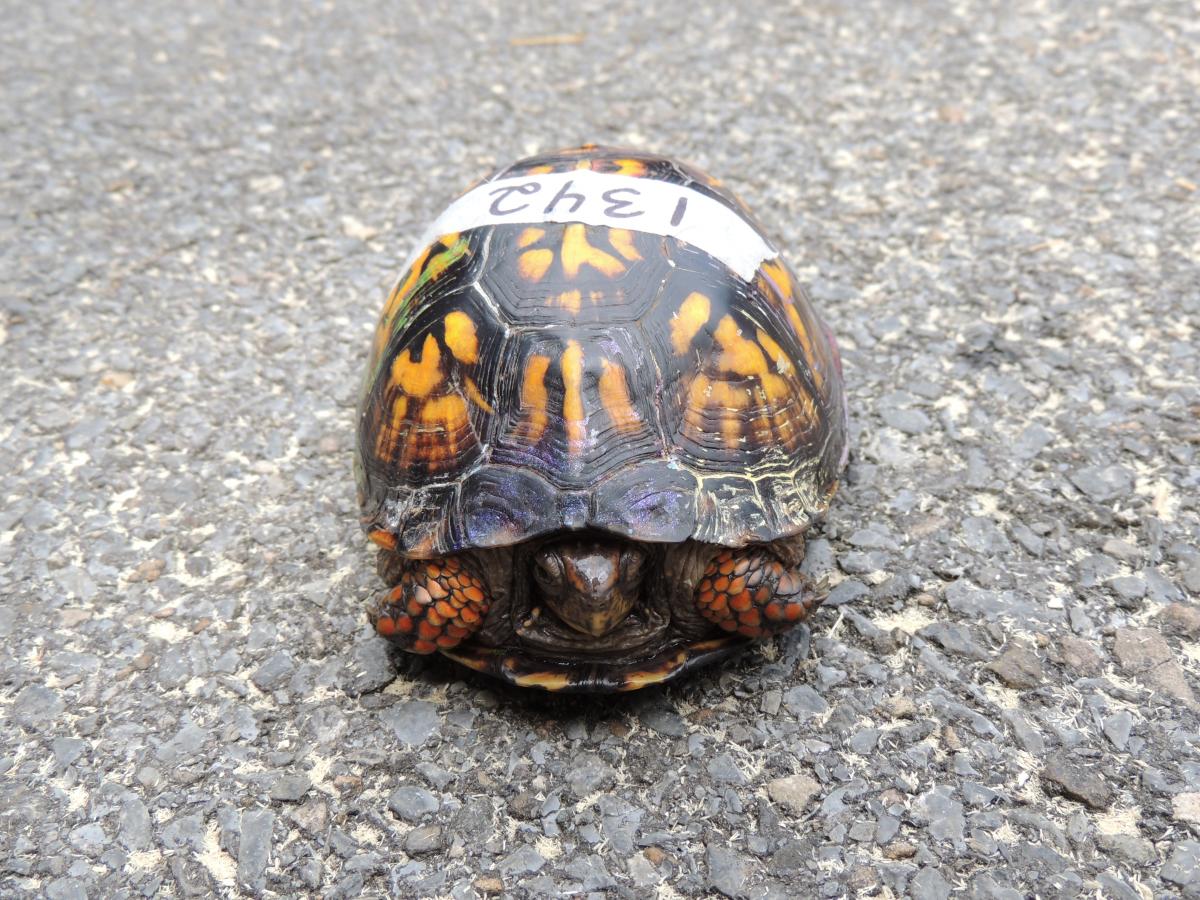 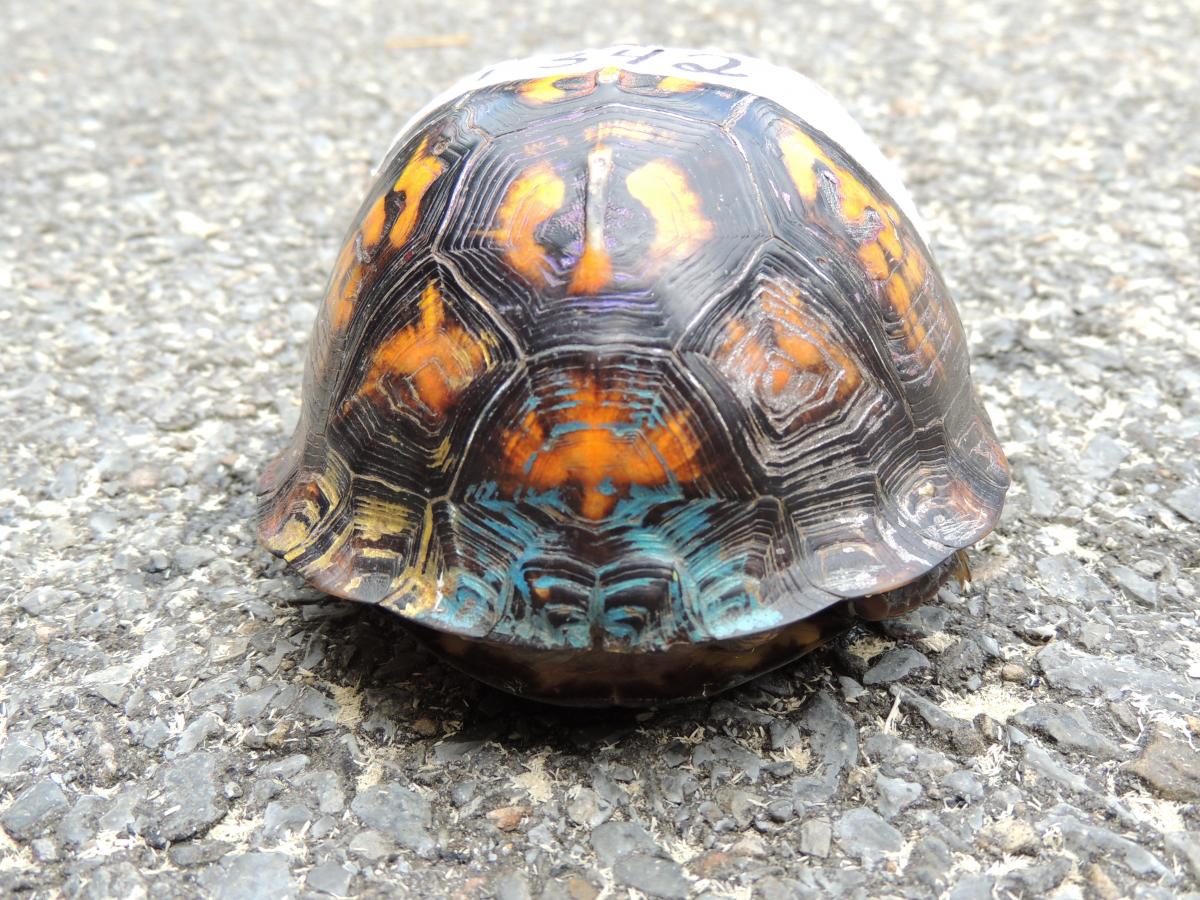 Eastern Box Turtle #13-1342 laid her five eggs this week, following her weekend induction. The eggs are not viable; several of them were desiccated and malformed, and one was broken. The turtle’s leg wound is healing well.

Eastern Box Turtle #13-1372 is beginning to look more like herself; the daily shell-scrubbing sessions are beginning to reveal the natural coloring of her shell. The turtle has not yet laid eggs; on Saturday, June 15, Dr. Dana started the turtle on a three-day course of medication to induce her to lay the eggs. The turtle’s leg injury is healing well. No one has yet come forward with information about the turtle’s kidnapping. 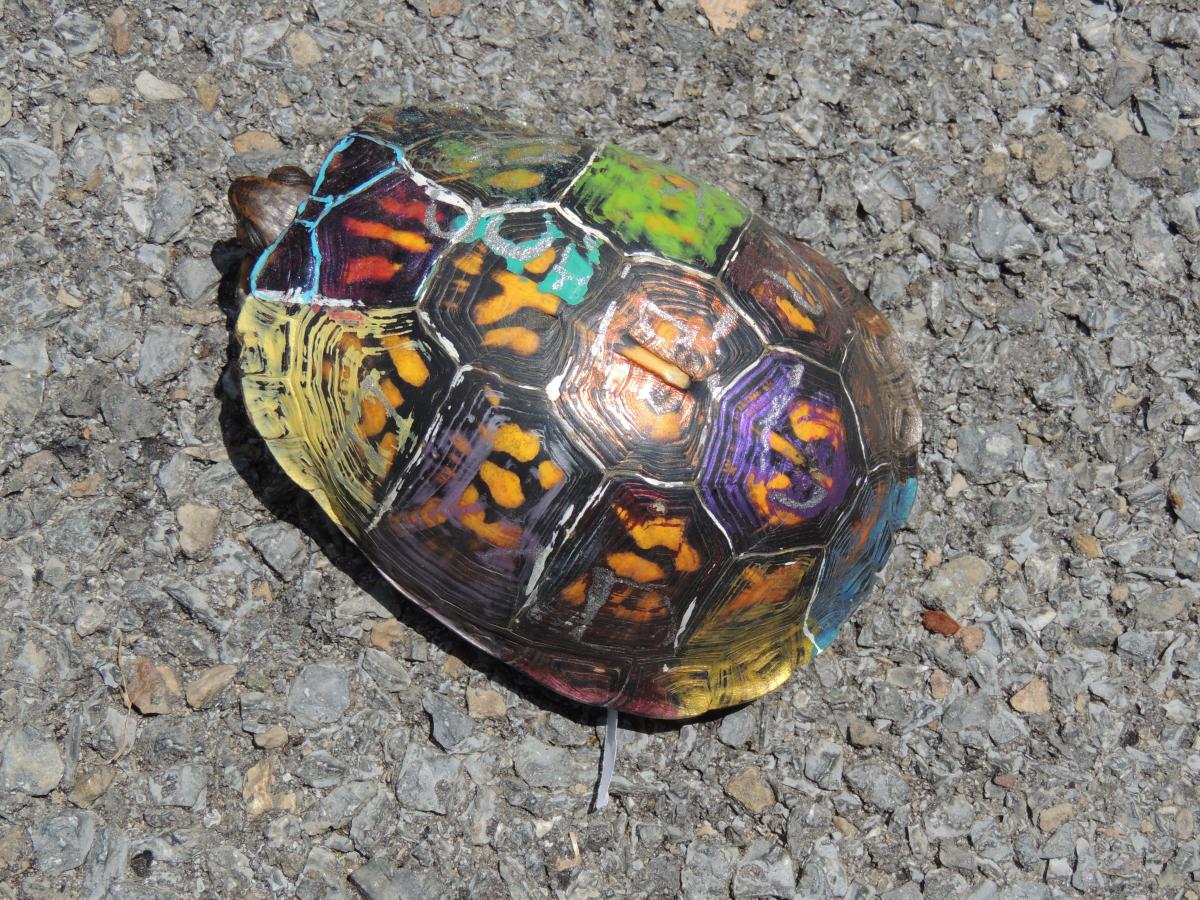 Eastern Box Turtle #13-1342 has not yet laid any eggs; but she has already received several scrubbing sessions from the Wildlife Center staff and volunteers. Scrubbing sessions are kept short so that the turtle isn’t stressed by an excessive amount of handling. Already, two areas of fingernail polish are coming off well.

We’re pleased at the level of interest in this “painted” box turtle. If anyone has information on the turtle, and knows who painted it, please contact us at 540-942-9453 or wildlife@wildlifecenter.org. We only request information on where the turtle was originally found (the more precise the location, the better), how long it was in captivity, and if it was housed with any other turtles. If we are able to answer those questions, we may be able to release this turtle back into her home territory.