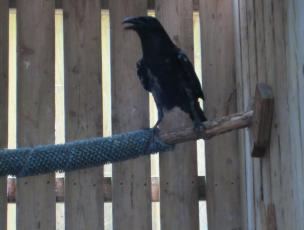 On June 6, the Wildlife Center admitted an unusual patient – an adult Common Raven – from Richmond, Virginia. Since 2000, the Center has admitted fewer than 10 ravens as patients.

The raven (believed to be a female) was part of a nesting pair in Henrico County. Biologists from the Virginia Department of Game and Inland Fisheries were aware of the nest, which was situated near an office building. Nesting ravens in that part of the state are far less common; ravens in Virginia are typically found closer to the mountains.

For approximately three months, a woman observed the female raven on the ground near a parking lot in Richmond. For the first two months, the raven was able to fly short distances; the bird was able to fly from the ground to the roof of a car. By the third month, the bird could not fly at all. The raven’s mate was observed bringing scraps of food to the grounded bird, but eventually stopped. The woman then began feeding the raven – who seemingly could not forage for food for herself – an appropriate diet of fruit, hard-boiled eggs, and cat food.

During the three month period, the woman tried to get help for the bird through local organizations and permitted wildlife rehabilitators. No rescue occurred due to a series of miscommunications and misidentifications of the bird’s species and life-stage. Several people initially told the woman that the raven was actually an American Crow, based on the description of the bird and geographic location. The woman was not convinced that the behavior was normal for a crow and, furthermore, she was confident in her bird identification skills.

She reached out to VDGIF and was put in touch with state biologist. Upon seeing the bird, the biologist identified it as an adult Common Raven and recognized that the bird was in poor condition.

The biologist caught the raven in the parking lot and brought the bird to a local veterinarian for initial care and assessment. The raven was then transferred to the Wildlife Center for further treatment and was admitted as patient #14-1100 on June 6.

Raven #14-1100 presented with large portions of missing feathers on her body, tattered flight feathers, and dry, scabbed skin on her left thigh and under the left wing. The veterinary staff tested the bird’s skin to determine whether the feather loss was due to a fungal or bacterial infection or an infestation of parasites. The bird was slightly thin and dehydrated, though very feisty and reactive to handlers.

Tests showed that mites were present on the raven, which would cause the bird’s extreme feather loss. The veterinary staff treated the bird with an anti-parasitic and administered an anti-inflammatory to treat the skin condition. The raven was housed in the Center’s isolation room until the mite infestation resolved.

During her first weeks at the hospital, the raven was bright and feisty with a strong appetite. Ravens are intelligent birds that can become easily bored in captivity. While in the isolation area, the raven became increasingly destructive of the items in and near her cage – tearing down the drapes and sheets that covered her cage was a daily activity. For the bird’s mental well-being, the veterinary staff felt it would be best to move the raven to a larger space as soon as possible. The scabs on her body were healing well and she was gaining weight. Following her second anti-parasitic injection on June 15, the raven was moved to a larger outdoor enclosure [C-pen 3]. The rehabilitation staff added a low “jungle gym” of perches for the bird to climb on, since she was still unable to fly. 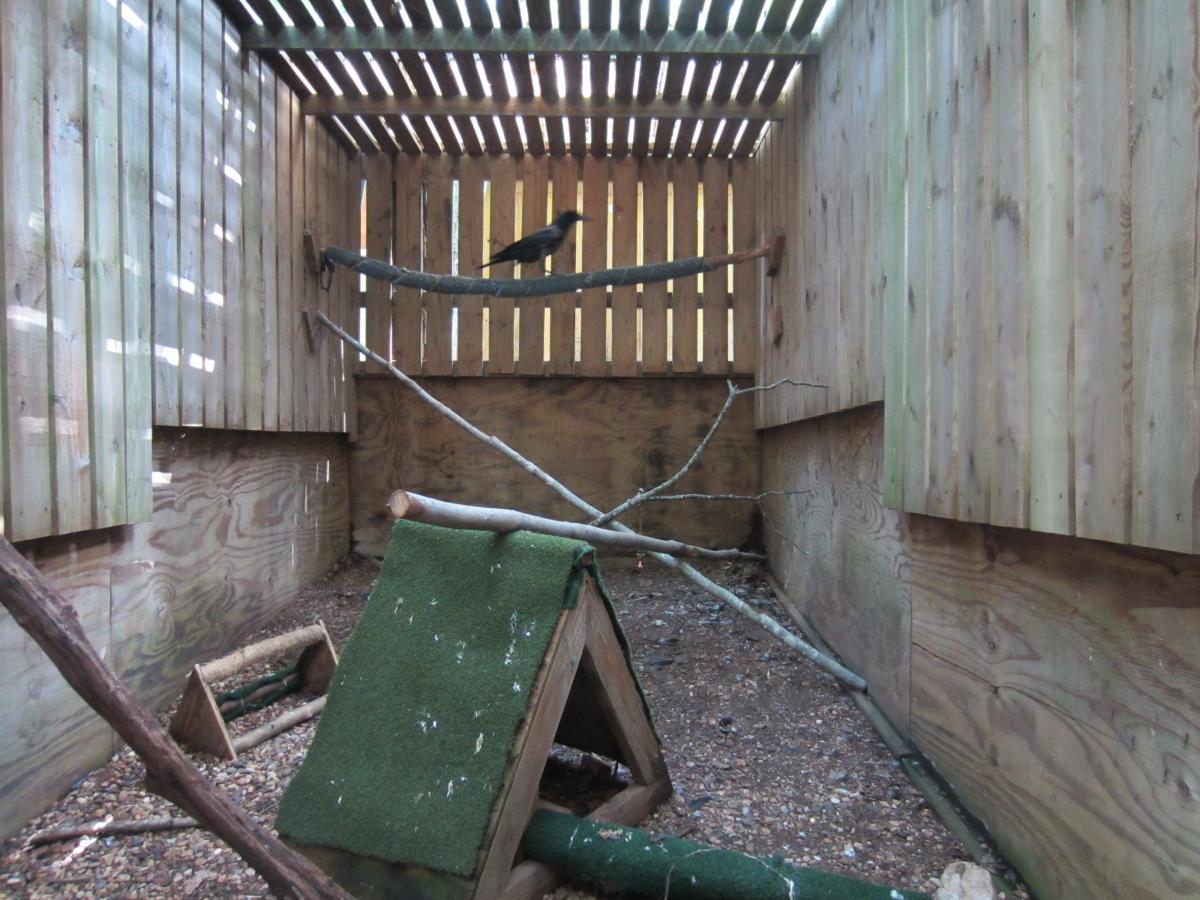 On June 22, the raven received her third and final anti-parasitic injection to treat the mite infestation. Her feathers were growing in; however, the process of growing feathers can be lengthy.

According to Birds of North America, a complete molt of an adult Common Raven can last from May-December. Each of the primary feathers can take approximately four weeks to completely grow in, and the feathers molt in succession, with four to six days between the start of each feather molting. Raven #14-1100 will remain at the Center until all of her feathers – both flight and body feathers – have grown in.

Besides being necessary for flight, feathers serve as part of a bird’s thermoregulation (control of their body temperature) and protection from the elements. Feathers are also part of many species’ courtship displays and can assist in communication to other birds. For these reasons, a bird cannot be released into the wild with insufficient feather coverage.

Once her feathers grow in, raven #14-1100 will need to time to build muscle strength in her chest and wings before she can be considered for release. Until then, the staff will monitor the raven’s appetite, attitude, and feather growth.

This raven’s stay at the hospital could last many months. The average cost of caring for a patient at the Center is $14 a day, which means the cost of care for this bird could be thousands of dollars. Your generous donation will help us provide the necessary care for this special patient.

We received another post-release Raven update from Maureen, the rescuer of Common Raven #14-1100. Maureen saw the raven outside of her office building on November 20; Maureen tells us that the female raven was with her mate and was preening him!

Maureen took several photos; the female raven is on the right. She has a notable slightly twisted wing feather from her imping procedure at the Center.

After the release of Common Raven #14-1100 on November 5, Maureen, the raven’s rescuer, returned to work [within two miles of the release site]. Within a few hours, she saw a raven outside of her office building – very likely the newly released female raven.

On November 10, Maureen and several of her co-workers reported that they saw two ravens hanging out together – the female raven was recognizable due to a slightly twisted imped feather. It appears as though the raven found her mate again!  Maureen is attempting to take additional photographs; this photo is from a Flag Raising Ceremony on Veteran's Day.

Common Raven #14-1100 was released today at Bryan Park in Richmond, Virginia. A crowd of about 100 people attended the release and eagerly listened as Wildlife Center veterinary director Dr. Dave McRuer shared the story of the raven’s rescue and rehabilitation. Certified wildlife rehabilitator Amber Dedrick unlatched the transport crate containing the raven, and everyone watched as the raven flew, beautifully, to a large oak tree. The raven sat in the tree for several minutes before she flew out of sight.

Common Raven #14-1100 has been flying well during the past few weeks. The staff have carefully monitored the bird for additional feather loss and have been exercising the bird daily to get her back into shape. The raven now has great stamina and is able to maneuver well through the Center’s 100-foot flight pen. On Friday, October 31, the veterinary team drew blood from the raven for a pre-release analysis; results were within normal limits.

The raven will be released on Wednesday, November 5 at 12:30 p.m. at Bryan Park [4308 Hermitage Rd] in Richmond. The release is open to the public; attendees should park and meet near Shelter #1. Those planning on attending should RSVP to lkegley@wildlifecenter.org.

Raven patient #14-1100 is doing very well after having several feathers imped in September. The bird lost two of the feathers that were imped last month, but she is flying well.

On October 13, the rehabilitation staff moved the raven to a larger flight pen [A3] for conditioning prior to release. The raven will stream live on the Center's Critter Cams -- this is the first passerine patient to be featured on the Critter Cam!

Raven #14-1100 has been doing well this past month. She has been housed in one of the Center’s outdoor C-pens while the staff monitored her feather growth.

Veterinary intern Dr. Meghan Feeney performed a “feet and feather check” on the Raven on September 19, and while the raven has grown several new feathers, eight of the bird’s primary feathers on both the left and right wings are still broken or tattered. Birds cannot be released with many broken or missing primary feathers, as they would be unable to fly. In order to expedite the raven’s release, the veterinary staff decided to imp the bird’s feathers – essentially, a “feather transplant” would be performed with intact donor feathers.

Imping feathers is an intricate process and requires a great deal of preparation, including the collection of the appropriate feathers from a donor bird. Dr. Dave reached out to the wildlife rehabilitation community to find the necessary feathers. Feathers were donated from Avian Haven in Maine and the Wildlife Rehabilitation Center of Minnesota. 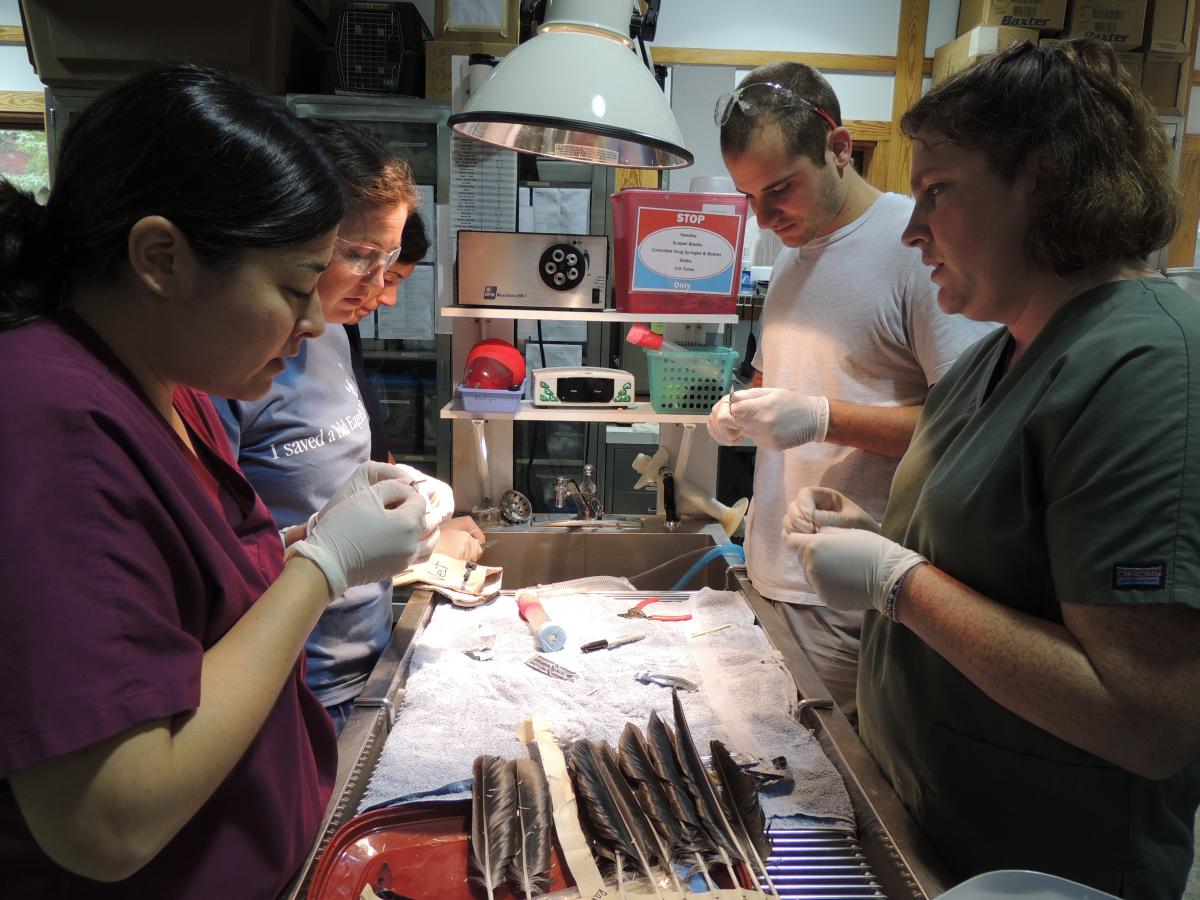 On September 25, the staff prepared the Raven and the donor feathers for an imping procedure. The process was successfully completed in approximately an hour. Six feathers were imped on the right wing and one was imped on the left. One feather shaft on the left wing was too damaged to imp. 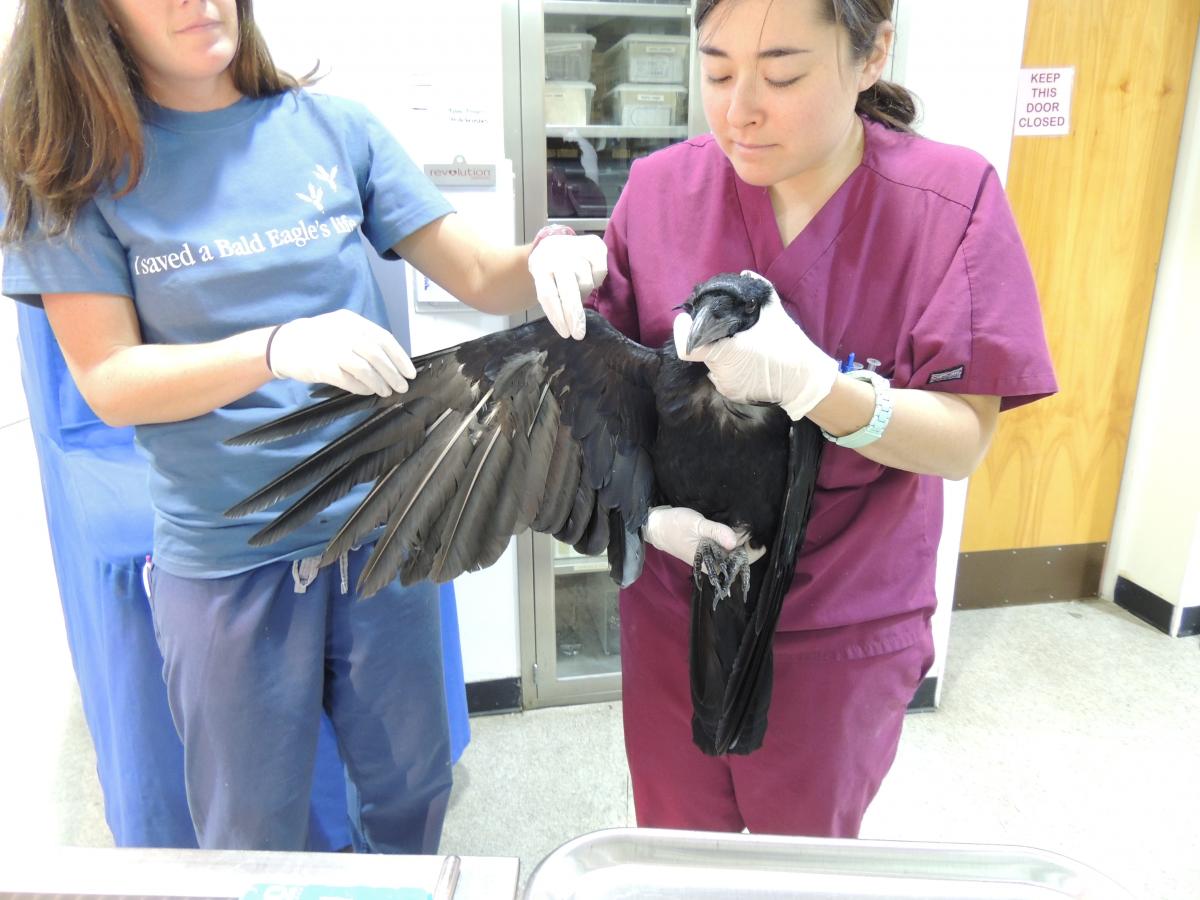 The staff will monitor the imped feathers to ensure they remain intact and will test the bird’s flight capabilities before assessing the bird for release.

Common Raven #14-1100 has been doing well during the last month. The raven’s feathers are growing in, and the bird is full of energy. 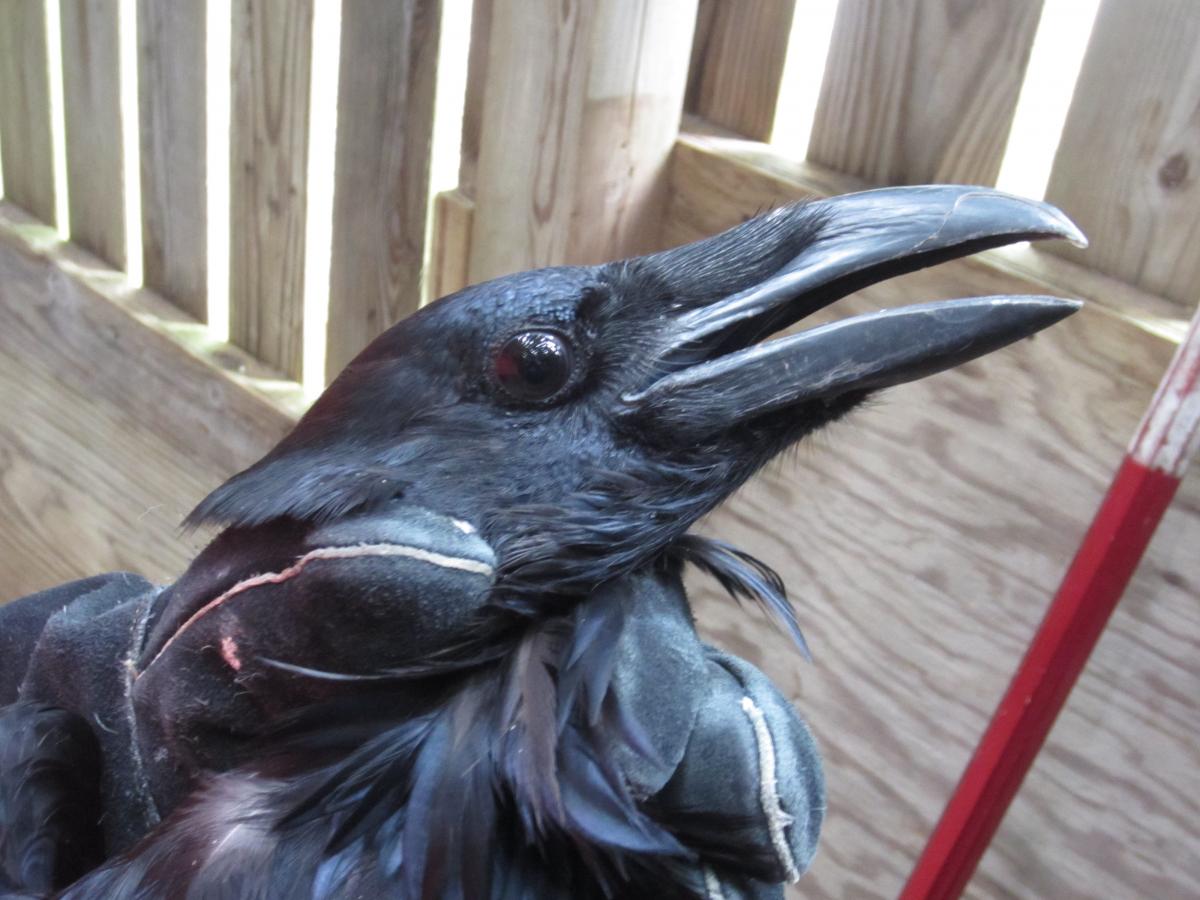 On August 16, the rehabilitation staff moved the raven from the C-pen enclosure to a smaller aviary enclosure to make room for other patients that needed the space.

The raven quickly began to damage the netting material in the smaller aviary space, and the staff had to return the bird to a larger flight pen [FP2] by August 21. Ravens are intelligent birds and can quickly become bored in captivity. The raven caused severe damage to the aviary – it will cost hundreds of dollars to repair and replace the netting. 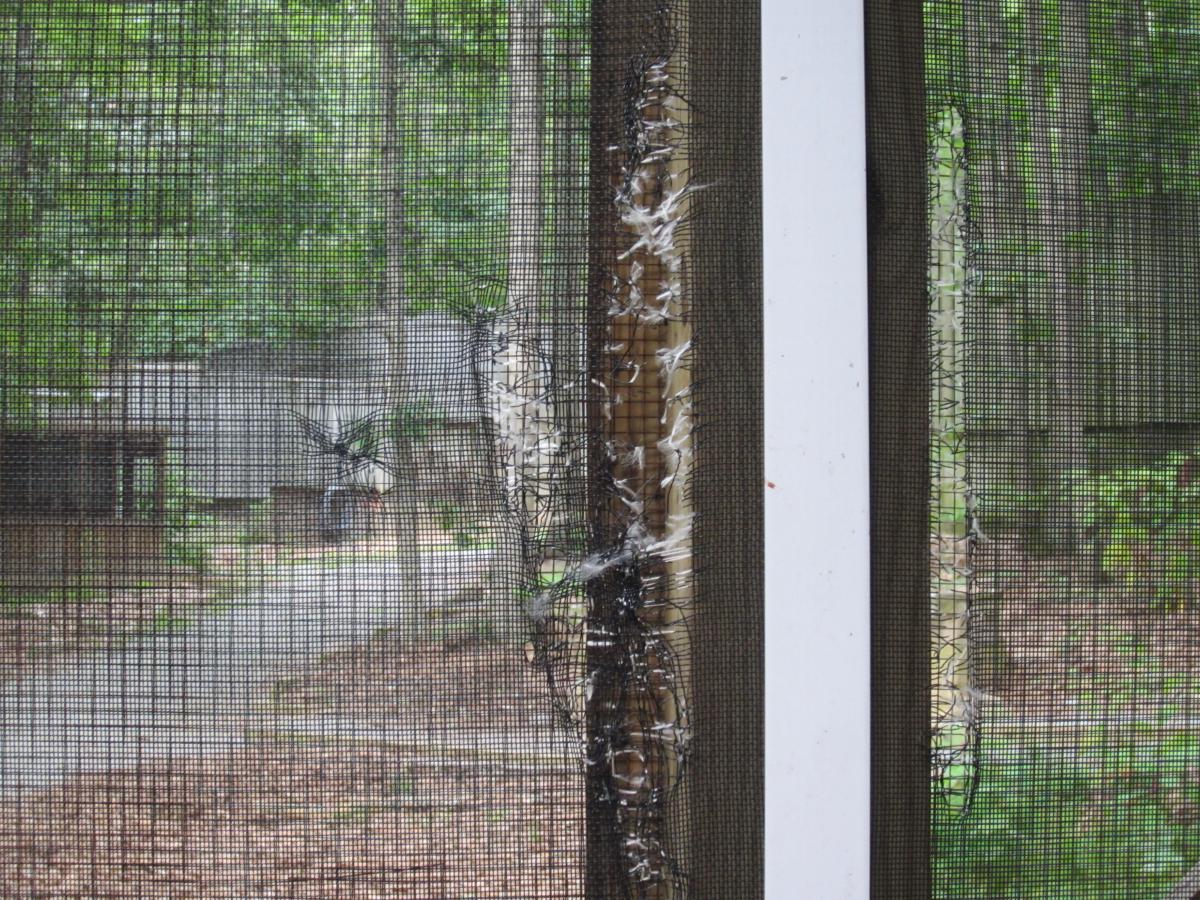 Because of this bird’s feisty behavior in captivity, the staff is hoping for a release within the next month, once the raven’s feathers have fully grown in. Feather growth will be monitored in the coming weeks to determine the soonest possible release date. 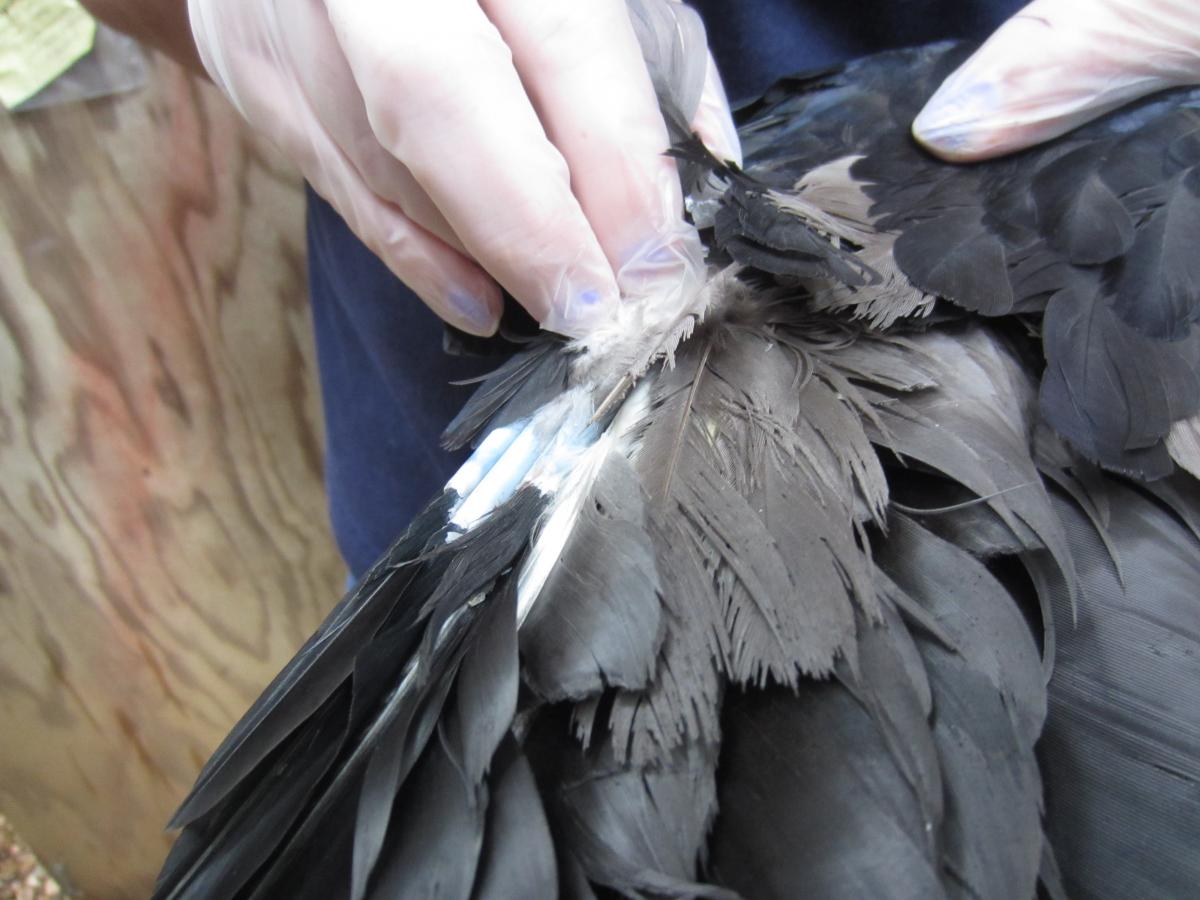 The raven's feathers "in sheath" as they grow in. 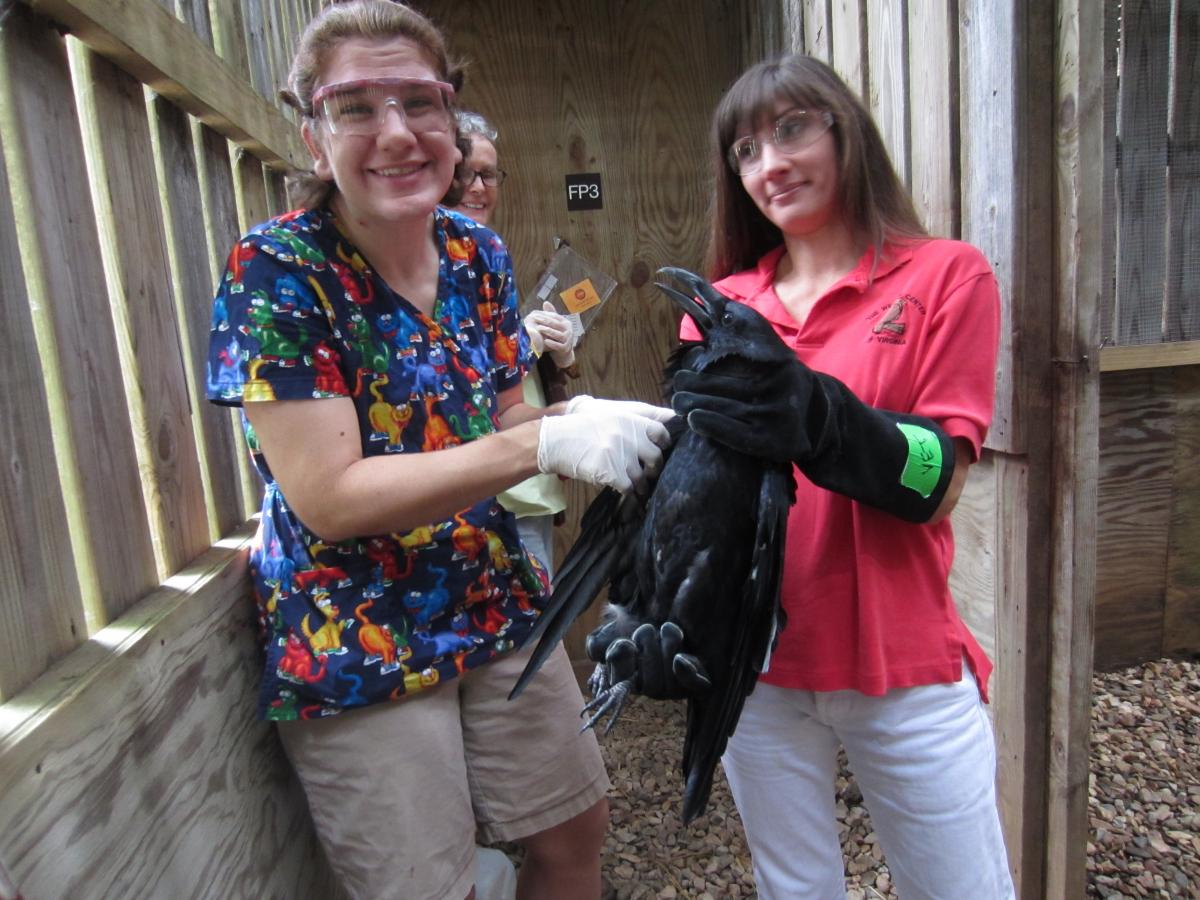 Common Raven #14-1100 has been doing well in her outdoor enclosure. The staff continues to monitor her feather growth and appetite. The bird is bright and active, and she maneuvers well on the “jungle gym” of perches set up in her enclosure.

To keep this patient entertained, the rehabilitation staff has given the bird plenty of enrichment items, including rotting logs and fruit stuffed with mice. 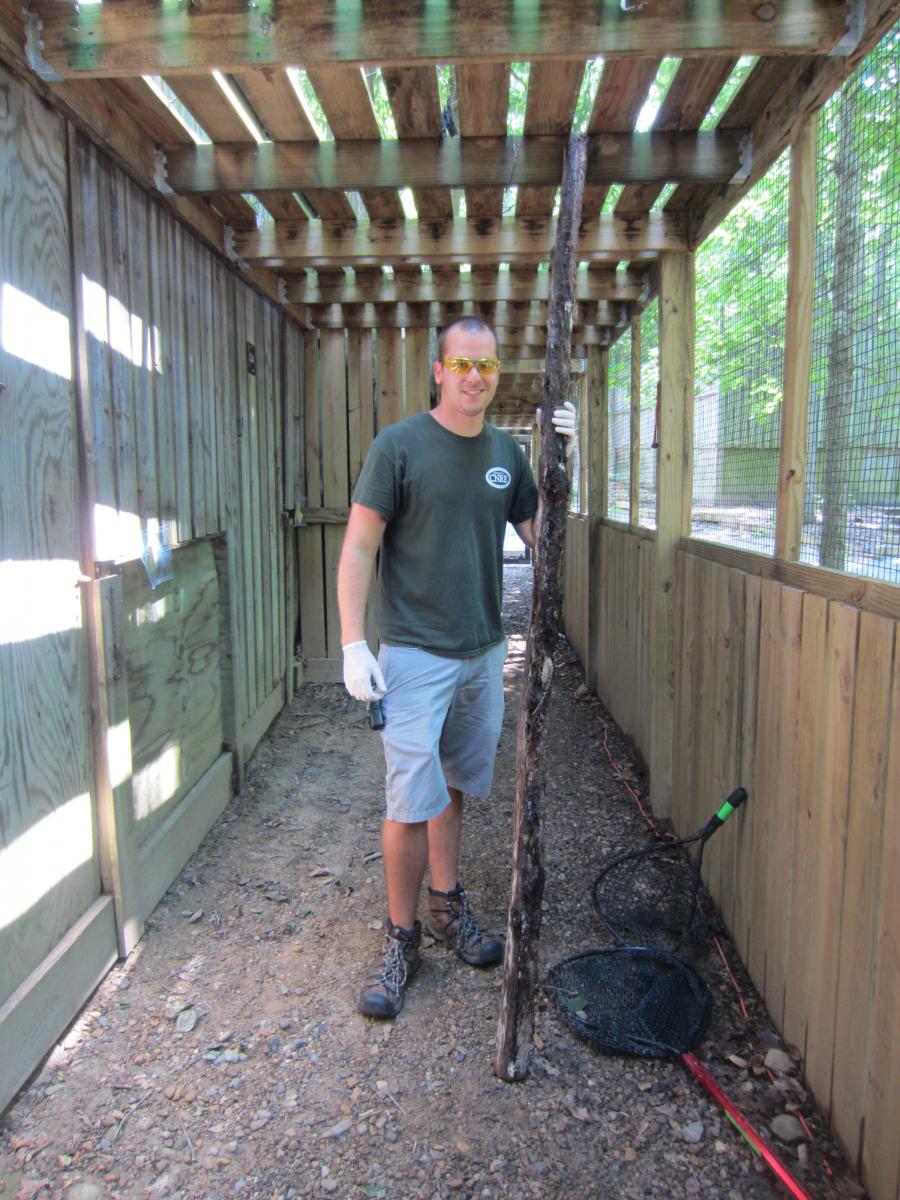 Below is a photo of a mite found of the raven shortly after she was admitted. The chewing mites found on the raven caused damage to the feather shafts, resulting in the raven’s feather loss.

Center supporters have donated hundreds of dollars towards the on-going care of this uncommon patient. The Center is grateful for the generous donations that allow us to help this raven.