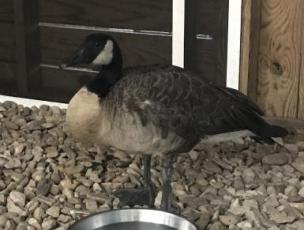 On admission, the goose was quiet but alert. Veterinary intern Dr. Olivia examined the bird and found that it was dehydrated, in poor body condition, and had several injuries, including two wounds on its left leg and a laceration on its bill. One of the leg wounds was relatively minor, but the other was deep and necrotic. Radiographs showed severe muscle atrophy in the goose's injured leg, indicating that the bird had not been using the leg much. The laceration on the goose's bill was likely caused by its attempts to remove the fishing lure from its leg.

After the exam, Dr. Olivia started the goose on antibiotics to combat infection, anti-inflammatories to reduce swelling and manage pain, and administered fluids to correct the goose's dehydration. Dr. Olivia also cleaned and bandaged the wounds on the goose's left leg, with the plan to surgically debride the more severe wound later that week. The goose was placed inside the hospital's holding area for close monitoring.

By early October, the goose's wounds had healed well, but the bird started to develop pododermatitis on its right foot. Pododermatitis is an inflammatory foot issue that is common in captive waterfowl; in this goose's case, it's likely that the injuries to its left leg caused it to place more of its weight on its right leg, exacerbating the issue. Staff also noted that the goose injured the carpus of both wings, most likely from bumping them against the sides of its crate. Vet staff have been applying carpal bumpers to the bird's wings to protect them while inside the crate and applying an antiseptic to the wounds.

After a couple more weeks of treatment, the goose's carpal wounds had mostly healed and its pododermatitis was improving. On October 21, the veterinary team moved the goose to the Center's outdoor aviary, where it will have more space to move around as it continues to recover. The goose's prognosis is guarded.

Your donation will help provide veterinary care to this Canada Goose ... and more than 3,800 other patients that the Wildlife Center will admit in 2022.

On November 29, Canada Goose #22-3163's bloodwork came back within normal limits and the vet team cleared the bird  for release. On December 2, staff met the goose's rescuer in Mechanicsville, Virginia to release the goose at the lake where it was rescued. The release was a big success!

Click on the video below to listen to the rescuer talk about this goose's story and watch the release.

During the past month, Canada Goose  #22-3163 has continued to do well in Aviary 1. While the goose's bumblefoot and carpal wounds have been challenging to manage, the vet team's treatment plan, including a combination of antibiotics, anti-inflammatories, and bandages, has helped the wounds heal well. Staff have closely monitored the goose on cam and note that the bird has been able to walk and swim in its enclosure without difficulty.

On November 19, staff determined that the goose was ready to return to the wild and brought the bird into the hospital to run pre-release bloodwork. If the bloodwork is within normal limits, then the vet team will clear the goose for release and front-desk staff will start coordinating release plans with the rescuer and volunteer transporters.

Until its release, the Goose will continue to stay in Aviary 1 and will be featured on Critter Cam #3. Tune in here!