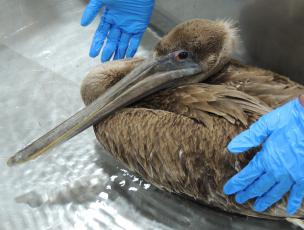 On September 29, a Brown Pelican was seen standing in someone’s driveway; the pelican was spotted there for a full day, not attempting to fly. A nearby registered transporter was able to rescue the pelican on September 30 and drove the bird to permitted wildlife rehabilitator Diana O’Connor, who transferred the pelican to the Wildlife Center that same day. 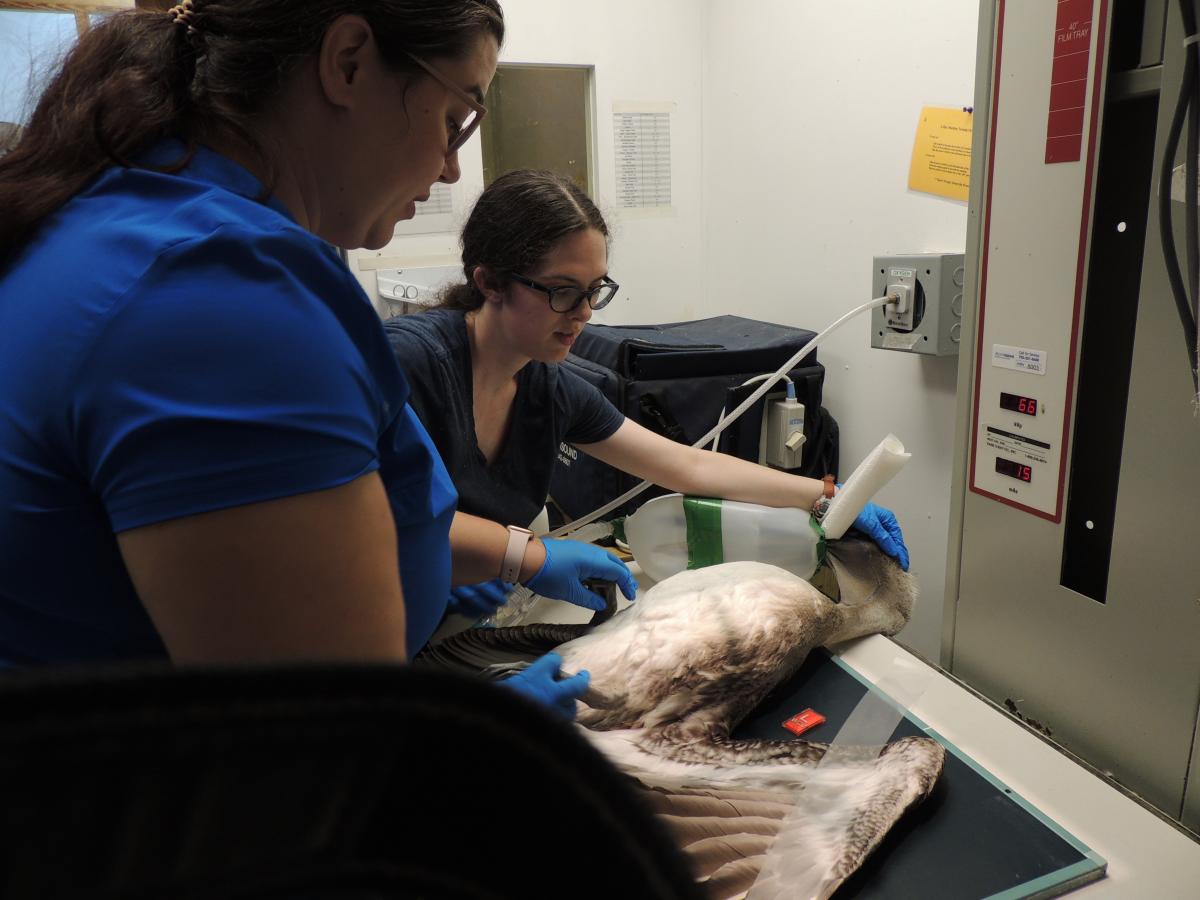 Dr. Karra, the Center’s veterinary intern, examined the female Brown Pelican. She found that the bird was thin, dehydrated, and covered in lice; the bird also had an enlarged left eyeball and swollen eyelid; the bird’s right eye showed intermittent nystagmus [repetitive, uncontrolled movements]. Radiographs did not show any fractures, but did indicate that there was air in the bird’s body cavity; all of these findings are most consistent with trauma to the head and body.

Dr. Karra treated the pelican with medicated eye drops, fluids, and anti-inflammatories. Prognosis for the bird is guarded; Dr. Karra is particularly concerned about the trauma to the left eye, which could result in vision loss; ocular trauma can also take several months to fully develop. Pelicans are reliant on complete vision to live out their natural behaviors, including acquiring food. 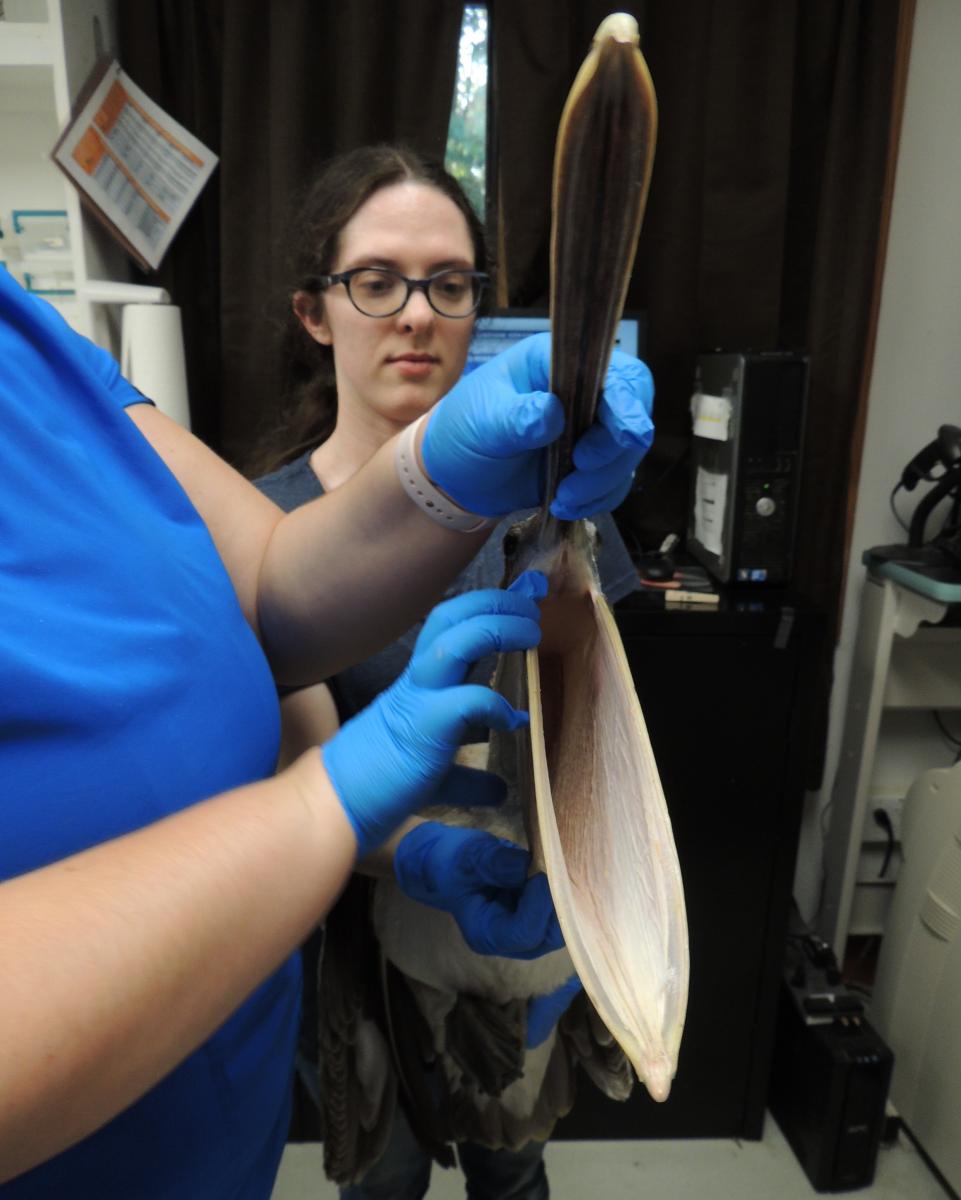 Pelicans are not common patients at the Wildlife Center; these coastal birds are not often seen inland. The Center has a stock of frozen fish; the staff will ensure that the pelican receives enough food daily as she heals. Ideally, the pelican would eat the fish from a tub on her own; first attempts at self-feeding were not successful on the morning of October 1.  According to All About Birds, “Brown Pelicans mostly eat small fish that form schools near the surface of the water—including menhaden, mullet, anchovies, herring, and sailfin mollies. A foraging pelican spots a fish from the air and dives head-first from as high as 65 feet over the ocean, tucking and twisting to the left to protect its trachea and esophagus from the impact. As it plunges into the water, its throat pouch expands to trap the fish, filling with up to 2.6 gallons of water.” 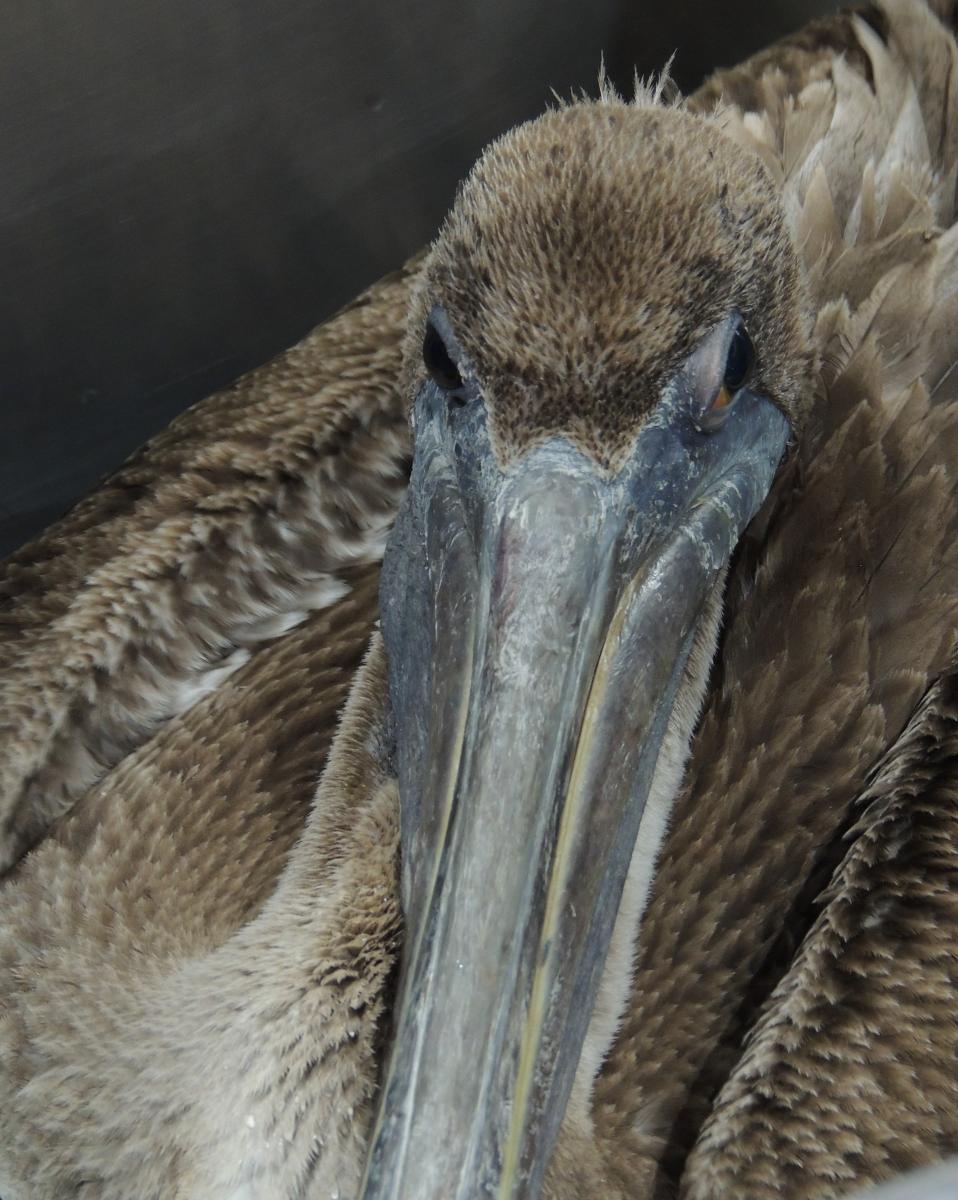 Wildlife rehabilitator Kelsey notes that, in her experience with pelicans in Florida, pelicans can transition to eating from a bowl in captivity, though, as Dr. Karra noted, when pelicans eat in this way, they toss their heads back to fully swallow the fish. Given the head trauma that she sustained, the pelican may not want to make that particular movement. The staff will hand-feed the pelican until she starts to eat on her own.

Your donation will help provide veterinary medical care to this injured Brown Pelican. Thanks for your support!

Brown Pelican #19-3008 did not make improvements this week; the pelican remained in the Center’s holding room, receiving intravenous fluids and other medications. Sadly, on the afternoon of October 10, the pelican was found deceased in her enclosure.

On Friday afternoon, the rehabilitation team moved Brown Pelican #19-3008 outside to the A3 flight enclosure, where they set up a large saltwater pool for her. Rehabilitation intern Kylee reports that the Pelican was swimming and appeared to enjoy her new space and pool. 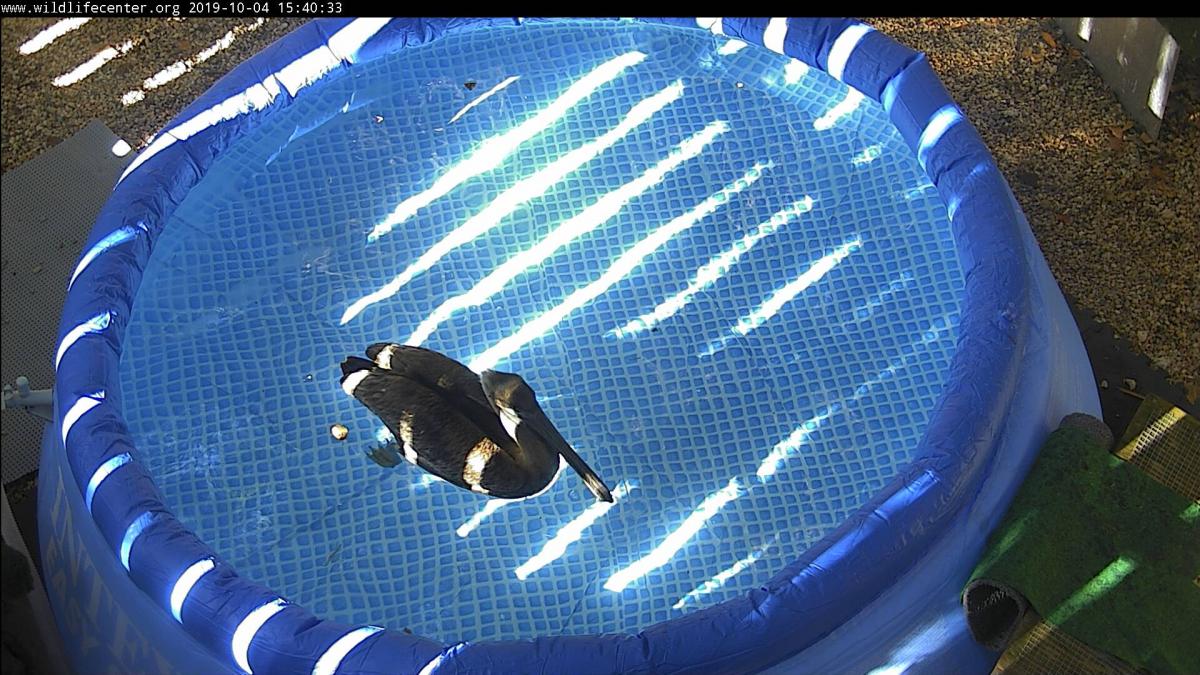 Unfortunately, prognosis is grave for this bird; the veterinary staff are unsure what caused the sharp decline; worsening head trauma from an initial injury could still be possible, as well as a viral infection like West Nile Virus.

As of Friday, October 4, Dr. Claire noted that Brown Pelican #19-3008 appeared a little brighter and more alert, though was still exhibiting some neurologic symptoms. The pelican hasn’t eaten on her own yet, and the staff have had to force-feed fish to the bird. Additional blood work revealed that the pelican was negative for lead toxicity. 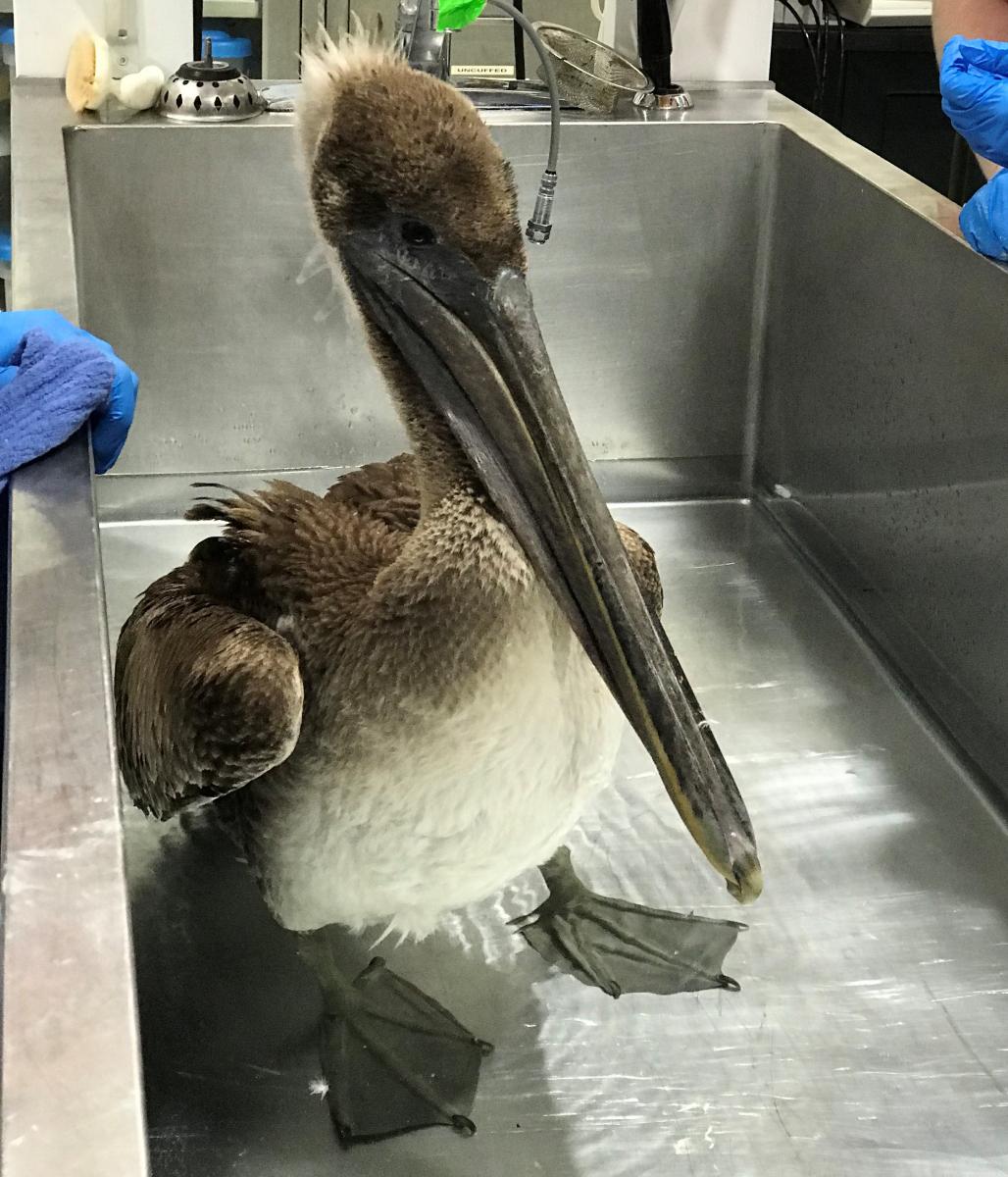 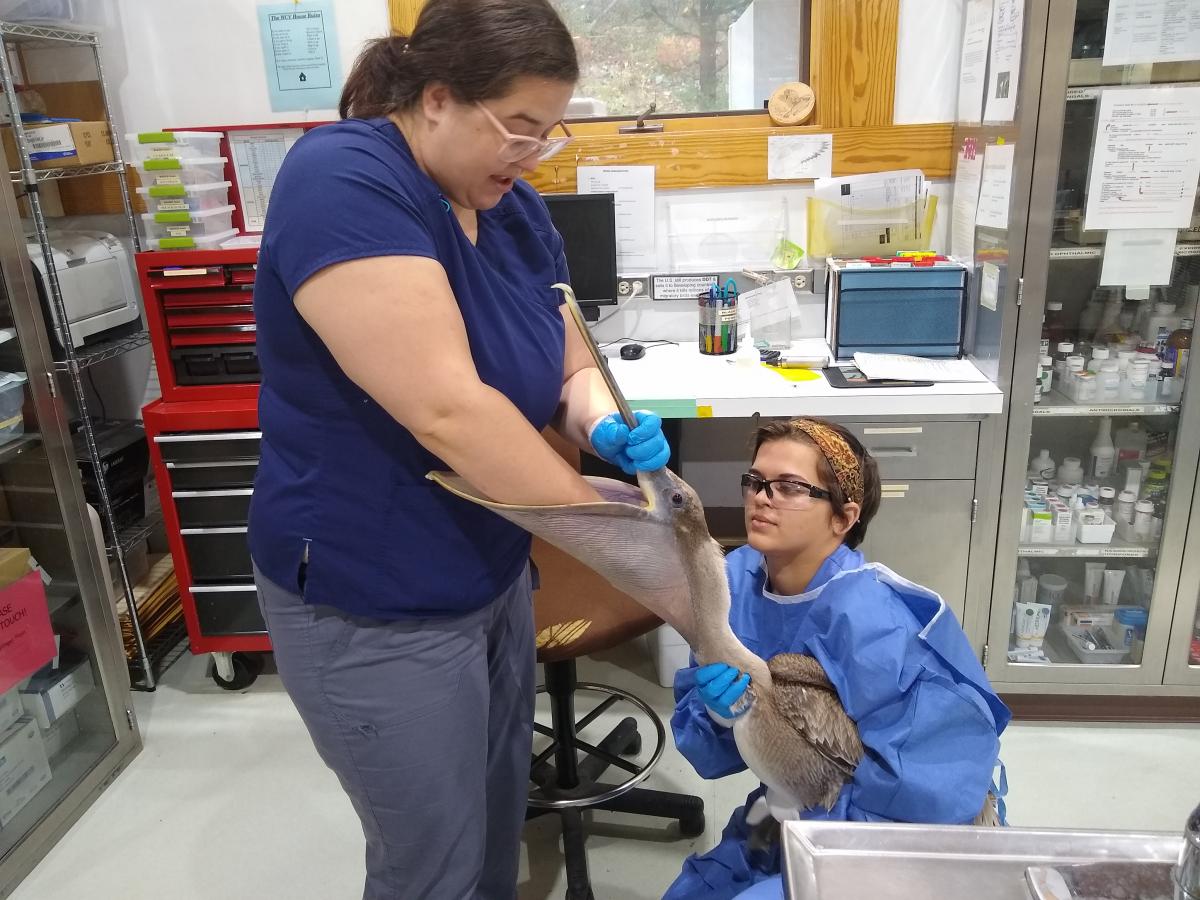 The staff are setting up a small swimming pool in the A3 flight enclosure; they are hoping that by giving the pelican more space, including room to swim, the bird will continue to improve, or at least will better be able to be observed for neurological deficits. If the pelican does well this weekend, the bird may be able to be seen intermittently on Critter Cam next week! 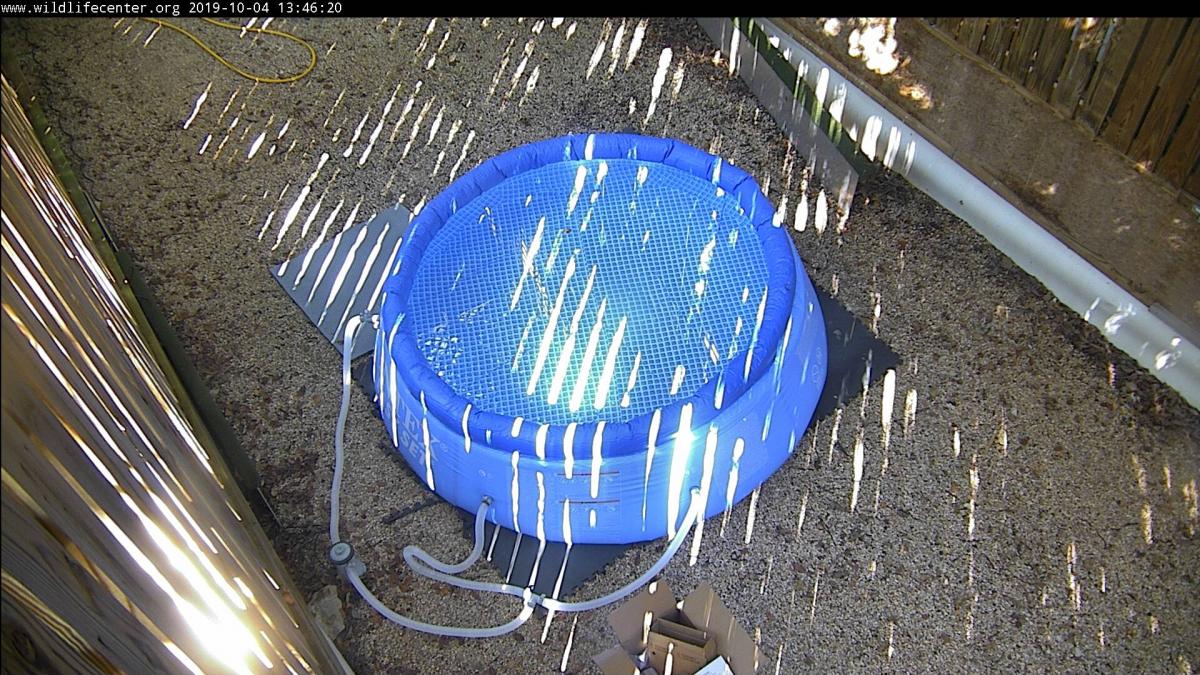