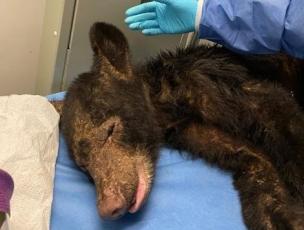 On February 16, Wildlife Center President Ed Clark responded to a call about a wildlife situation in his own neighborhood -- a small, thin Black Bear yearling was reportedly sleeping on someone's porch, not moving. Ed was able to acquire a variety of safety equipment and gloves and trapped the bear yearling in a crate.

Dr. Cam, one of the Center's veterinary interns, examined the male yearling when he arrived. The yearling was bright and feisty, though very thin and weighed in at 14.30 kg. The bear had significant hair loss all over his body, as well as some crusting of the skin, a classic symptom of mange. A skin scraping confirmed the presence of sarcoptic mange mites. No other significant injuries were found.

The yearling was placed in Bear Pen 3, and in the coming days, the rehabilitation staff will closely monitor the bear's appetite and food intake. When the bear is reliably eating a particular food item, the team will offer an oral medication to treat the mange mites.

Mange is a growing problem for Black Bears in Virginia; if you see a mangy bear, call the Department of Wildlife Resources for additional assistance and advice.

Your donation will provide veterinary medical care to this debilitated Black Bear ... and more than 3,000 patients that the Center will admit this year!

After spending just over two months at the Wildlife Center, Black Bear Yearling #21-0153 was released in Rockbridge County on May 4. During the pre-release examination, Dr. Karra noted that the bear's coat was much fuller and healthier than when he was admitted, and skin scrapes done on the same day confirmed that he was free of sarcoptic mange mites.

Black Bear yearling #21-0153 has made major strides toward a full recovery from the mange which was afflicting him at admission. Dr. Sarah noted that the bear's fur has markedly improved, which is a very positive sign for his overall condition. She also noted that he is bright, alert, responsive, and feisty, even more positive indicators that this bear is almost ready to return to the wild. The rehabilitators have begun to consider #21-0153 for release, which may happen as early as next week.

Black Bear Yearling #21-0153 continues to spend time in an isolated bear pen, regaining strength and vitality and recovering from the mange which brought him in originally. One positive change that the veterinarians noted was that this bear was brighter and more active than before, taking a defensive posture and vocalizing during a safely-distanced check-up. This is a good sign, as it shows that the bear is regaining his energy while keeping his natural and necessary fear of humans. 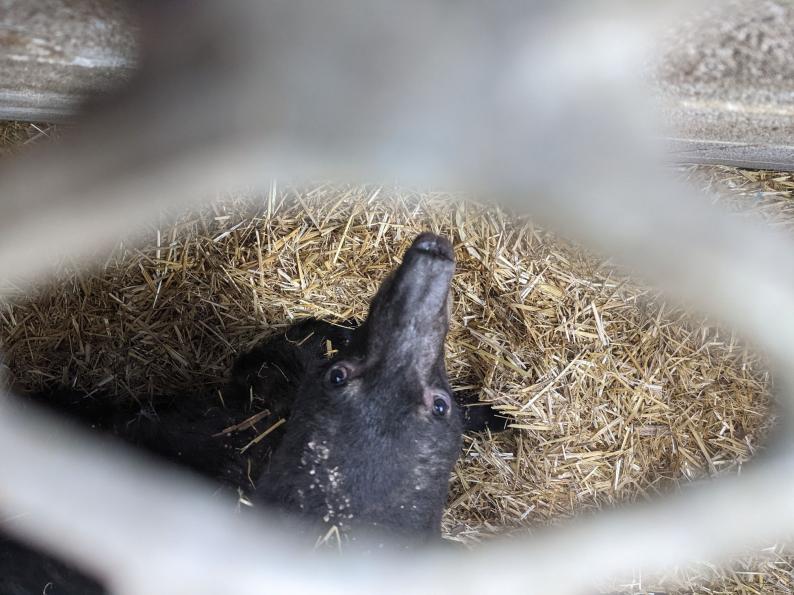 The current plan is to anesthetize this bear soon to run another general check-up and look for mange mites, as well as test blood and fecal samples. The goal is to eventually move this bear into the larger bear yards in the Black Bear Complex, likely after the other Black Bear patients have been released into the wild.

Black Bear Yearling #21-0153 has now been at the Center for just over a month. On March 16, he was sedated again for another examination by the Center’s veterinarians. Before sedation, the staff noted that the bear was quiet but alert and responsive. Once the bear was sedated, the veterinarians noticed that he was missing a claw on his right forelimb, which was quickly cleaned. Additionally, the bear’s ears contained a small amount of debris. Blood and stool samples, as well as skin scrapes, were collected by the veterinarians for the purpose of running diagnostics to check on the bear’s condition. The veterinarians found eight dead mange mites on the bear’s skin, but none living, which is a good sign and may indicate that the bear’s mange has been resolved.

The other tests revealed nothing concerning, though the veterinarians noted that the bear did have low blood urea nitrogen levels, which is likely a result of the bear’s young age. The staff will monitor these levels moving forward, as low levels could be an indication of an issue linked to nutrition, hydration, or liver health.

Overall, although this bear remains quiet, he is continuing to eat all of his meals and is overcoming the mange which was so negatively impacting his health. This bear will remain in an isolated bear pen for the next few weeks, as he continues to heal and recover.

Yesterday was Black Bear yearling #21-0153's two-week post-admission checkup. After sedating him, the veterinarians performed a physical exam and noted that the bear's skin condition has improved slightly, though the yearling's skin is still quite crusty. Additionally, the veterinarians collected skin samples to check for mites, and none were found. This is good news, as it signifies that the oral anti-mite medication given to the bear on February 18 has been working. Stool samples were also collected which were parasite-free as well. The veterinarians also took a blood sample, and gave the bear his second round of mange medication, in order to eliminate any remaining mange-causing mites. 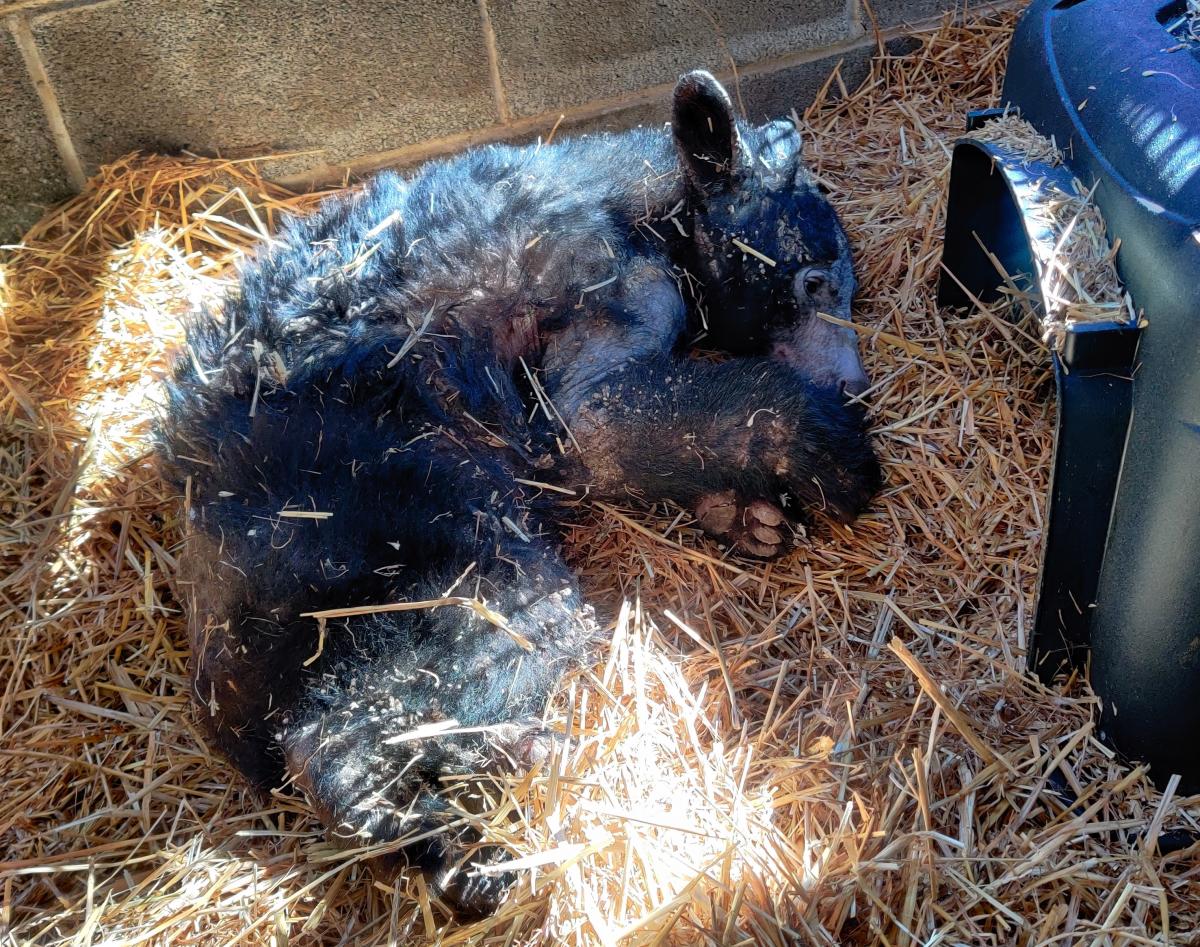 Dr. Cam mentioned that, although he has been quiet lately, this bear is eating well and tends to keep to himself in the den. Our rehabilitators also noted that he doesn't enjoy mangoes. Our staff plans to keep a close eye on the yearling as he continues his treatment and rehabilitation, and have scheduled another similar check-up in a few weeks.