On May 26, a Black Bear was admitted to the Wildlife Center of Virginia. A homeowner in Rockingham County had seen the bear in a tree for two days; the citizen thought that the bear was a cub and called the Department of Game & Inland Fisheries. A biologist responded to the scene and found that the bear was an injured yearling; he was able to dart and capture the bear.

Dr. Monica examined the female yearling at admission and found that the bear was quiet, alert, and very thin. The bear was anesthetized for a full exam. Dr. Monica found wounds on the bear’s face and back, and a broken incisor. Radiographs revealed a small fracture of the tip of the bear’s nasal bone, as well as changes to the lungs. Skin scrapings revealed mites; additional samples were taken for ringworm. The bear weighed 10 kg.

While the bear was under anesthesia, Dr. Monica placed an IV catheter to deliver continuous fluids during the bear’s treatment. She removed the remainder of the bear’s injured tooth, and carefully cleaned the infected wound on the bear’s back. There wasn’t enough skin present to suture the wound closed, so Dr. Monica applied a bandage over the area. The bear received antibiotics, anti-inflammatories, pain medication, and anti-parasitics.

The bear was placed in a Zinger crate in the Center’s holding room. The rehab team gave the bear electrolytes; the next day, the bear started a re-feeding protocol to slowly transition the bear’s digestive system to receiving food again. The bear was moved to the Center’s Bear Pen to give it a quieter space in which to recover. The team will monitor the bear closely, and will need to change the bear’s bandage on May 29.

Your donation will help the Center to provide veterinary medical care to this bear … and all of the patients admitted in 2018.  Please help!

Black Bear yearling #18-1120 was anesthetized on June 14 for a follow-up physical exam and radiographs, after the staff became increasingly concerned about the bear’s condition. Dr. Monica found that the bear had very thin, pliable skin and a worsening hair coat; the bear was also very thin and had not gained any weight despite eating consistently since her admission.

Radiographs and an ultrasound confirmed fluid around the bear’s lungs and within her abdomen. Blood was drawn for diagnostics; results for several tick-borne diseases came back negative. Unfortunately, the staff are unsure what is causing the yearling’s illness. Due to the bear’s deteriorating condition, the team made the difficult decision to humanely euthanize the bear.

Black Bear yearling #18-1120 has been a challenging patient for the veterinary team during the past two weeks. Even though the bear is small and underweight, the age of the bear makes it impossible to handle her for treatments while she’s awake. The team is carefully monitoring the bear’s wounds and have used several different types of bandages to keep the wounds clean and covered without having to change bandages every day. The bear has been eating but is quiet and sedate.

On June 10, the bear was sedated for an additional hands-on examination. Radiographs revealed a worsening condition; the bear had signs of fluid throughout her chest and abdominal cavity. The bear also had additional wounds on her body. The veterinarians aren’t sure what’s causing the worsening condition of the bear, though a parasitic infection or a tick-borne disease could be possible. The team will reassess the yearling on June 14 and will perform additional diagnostics to determine the next steps of the bear’s treatment plan. 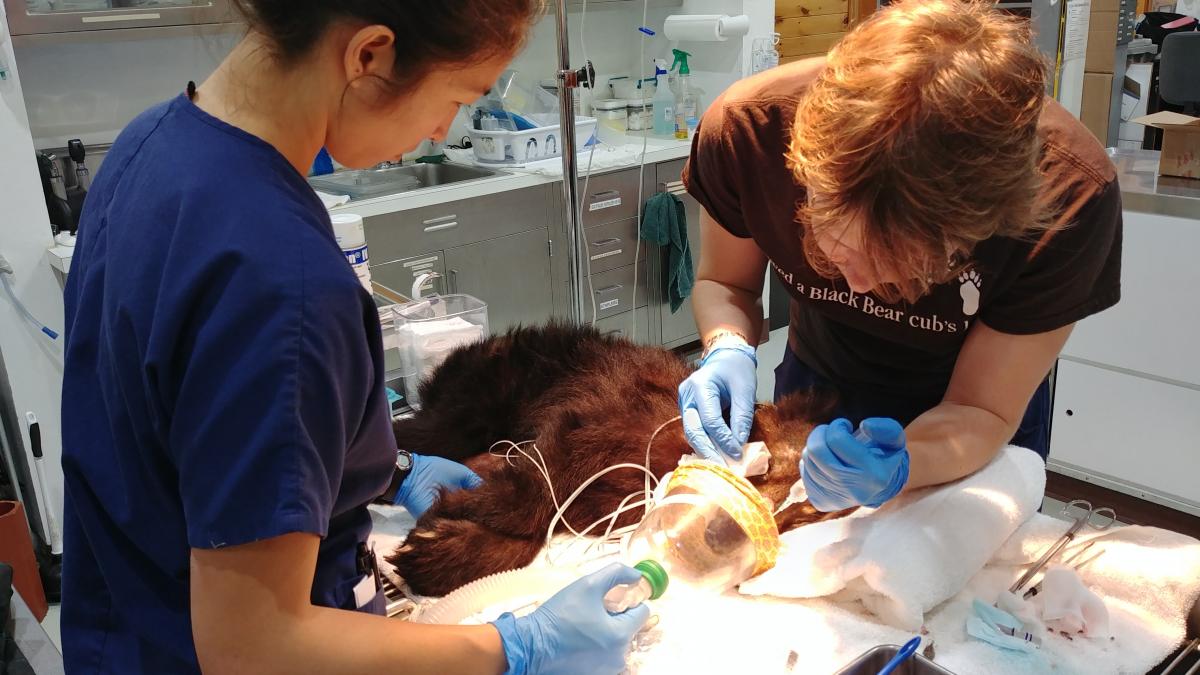