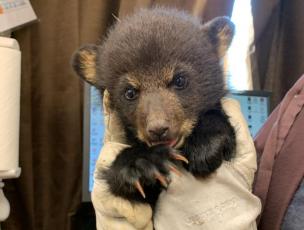 On April 16, a young Black Bear cub was found in Floyd County, Virginia, attempting to eat a homeowner's sweet feed (goat food). The homeowner waited several hours to see if the sow would return to claim her cub; but after a few hours with no sign of the bear's mother, the bear cub was first taken to Southwest Virginia Wildlife Center of Roanoke. A biologist with the Department of Wildlife Resources checked the area for den sites but was unable to find any sign of a sow. The cub was transferred to the Wildlife Center of Virginia later that same evening.

Dr. Sarah, one of the Center's veterinary interns, reported that the female cub was a little thin, weighing in at 1.50 kg. Radiographs were within normal limits, and blood work showed that the bear was mildly anemic and had low levels of protein in her blood, likely due to being without her mother for a short period of time. 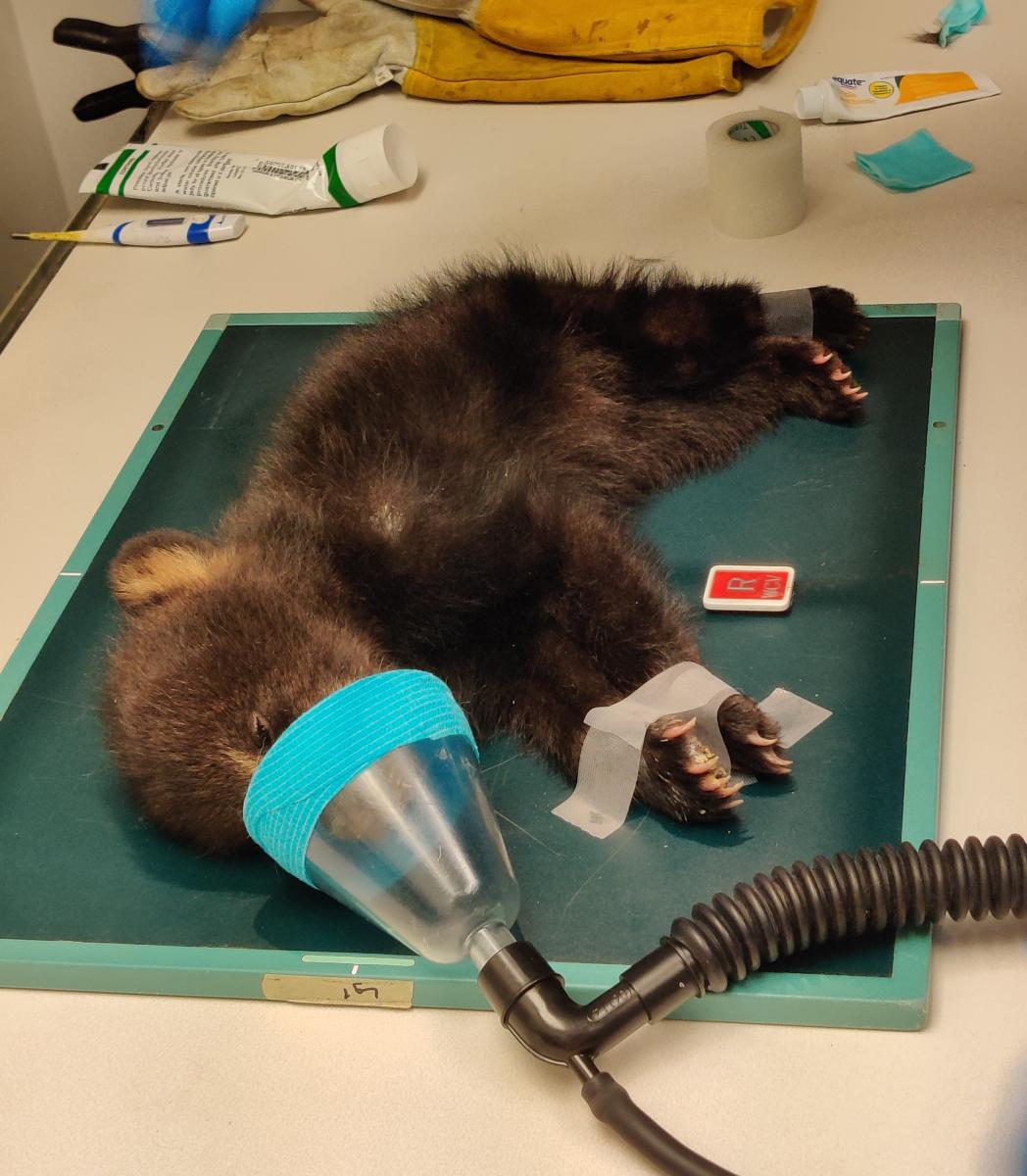 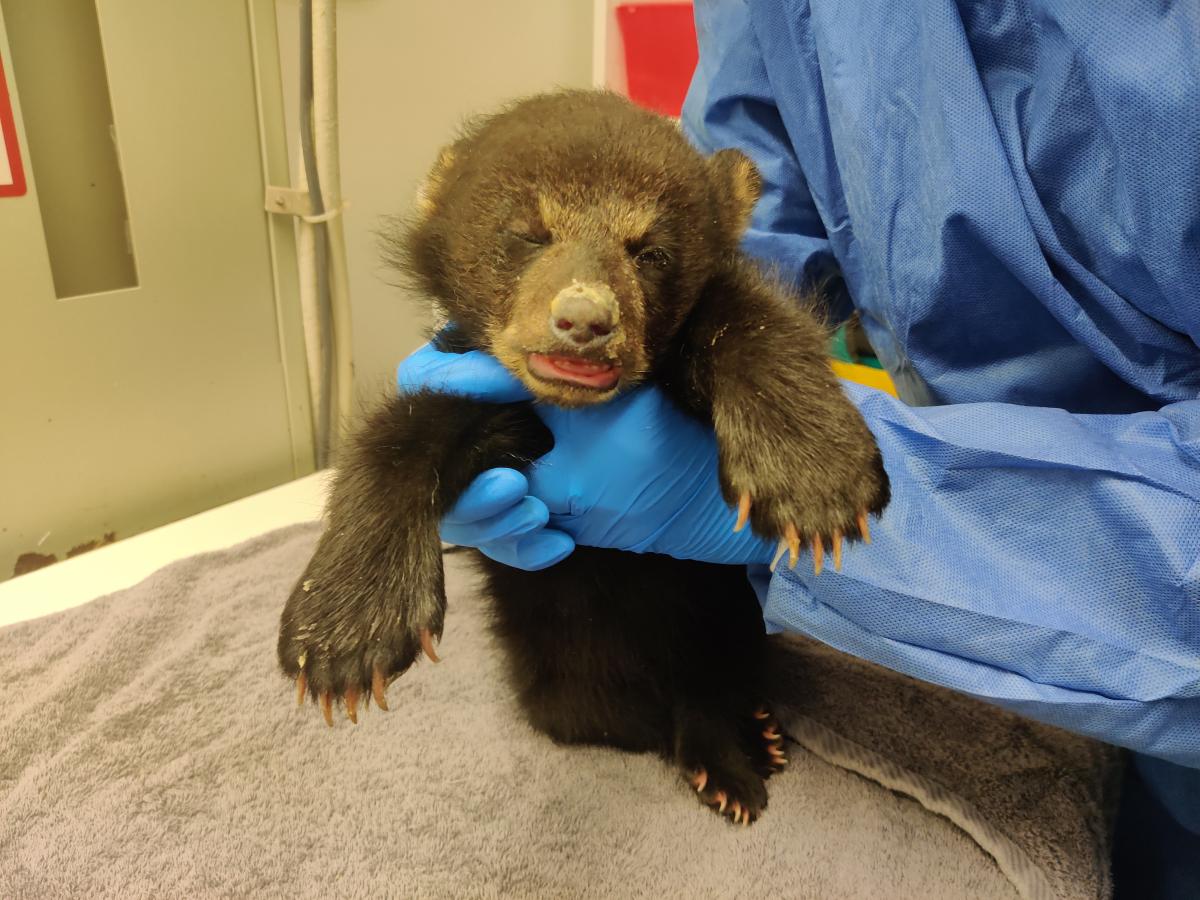 The rehabilitation staff set the cub up in a Zinger crate and started attempted to bottle-feed the cub as well as offering a mush bowl. The bear appears to be more reluctant to bottle feed, but is eating her mush bowl during the day.

Your donation will help provide care for this Black Bear cub until spring of 2022! Thank you for your support.

The remaining three Black Bears of 2021 were picked up for release on April 20!

On the afternoon of April 19, wildlife rehabilitation supervisor Kelsey baited the DWR bear trap and the entire transition area of the Black Bear Complex with some tasty treats. The bears were very interested and quickly moved into the transition area when the adjoining gate was opened. Black Bear #21-1427 [One Ear] entered the DWR trap and was quickly contained; the other two bears remained in the transition area so that the veterinary team could easily dart and sedate them the following morning.

On Wednesday, April 20, the team was able to successfully sedate all three bears so that each could be examined, weighed, and ear-tagged for release. Bloodwork and skin scrapes were also performed. Final weights:

Two DWR biologists arrived to transport and release the bears in two separate locations. Double Lavender and Yellow Tag are being released together in the same remote location. The one-eared bear -- who was the last cub to arrive in 2022 -- will be released separately. 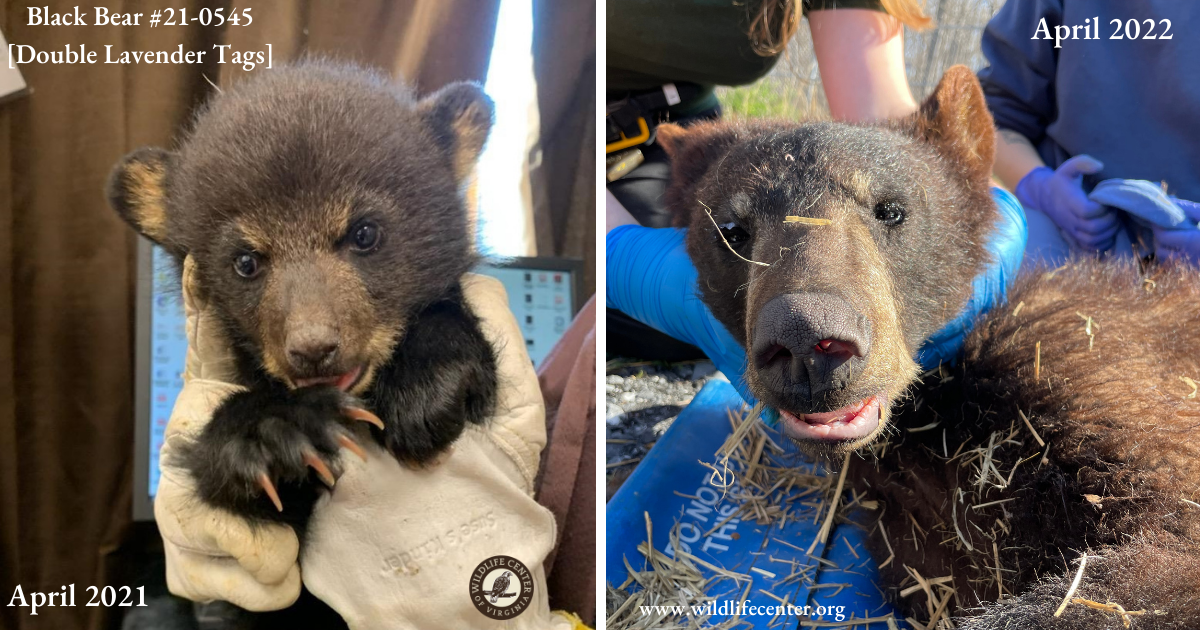 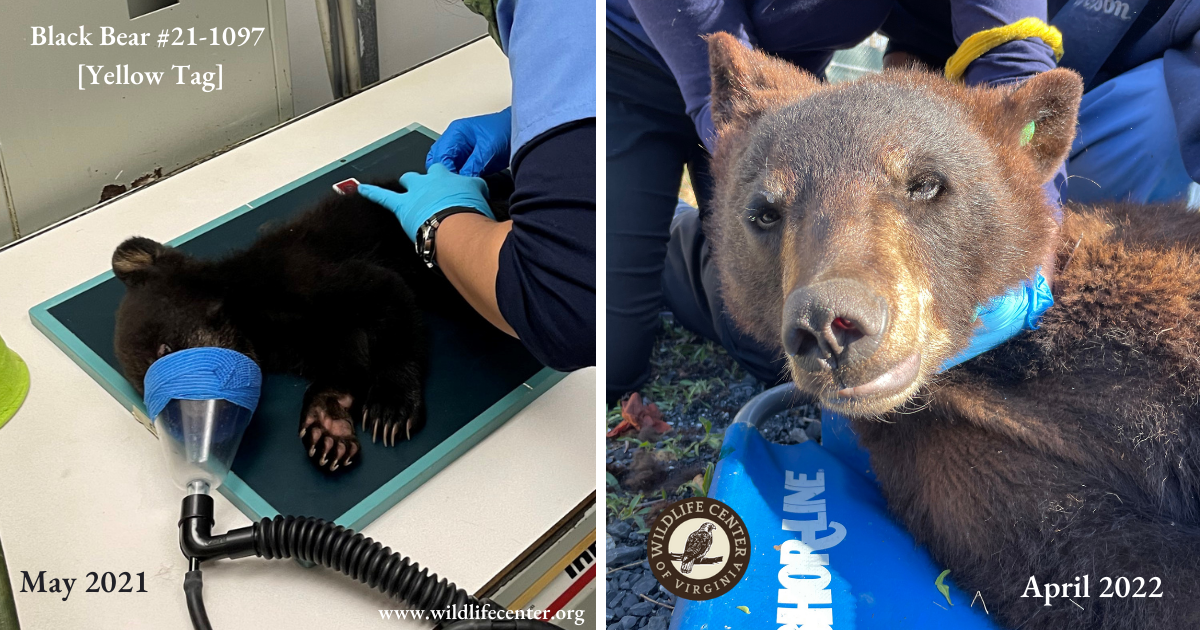 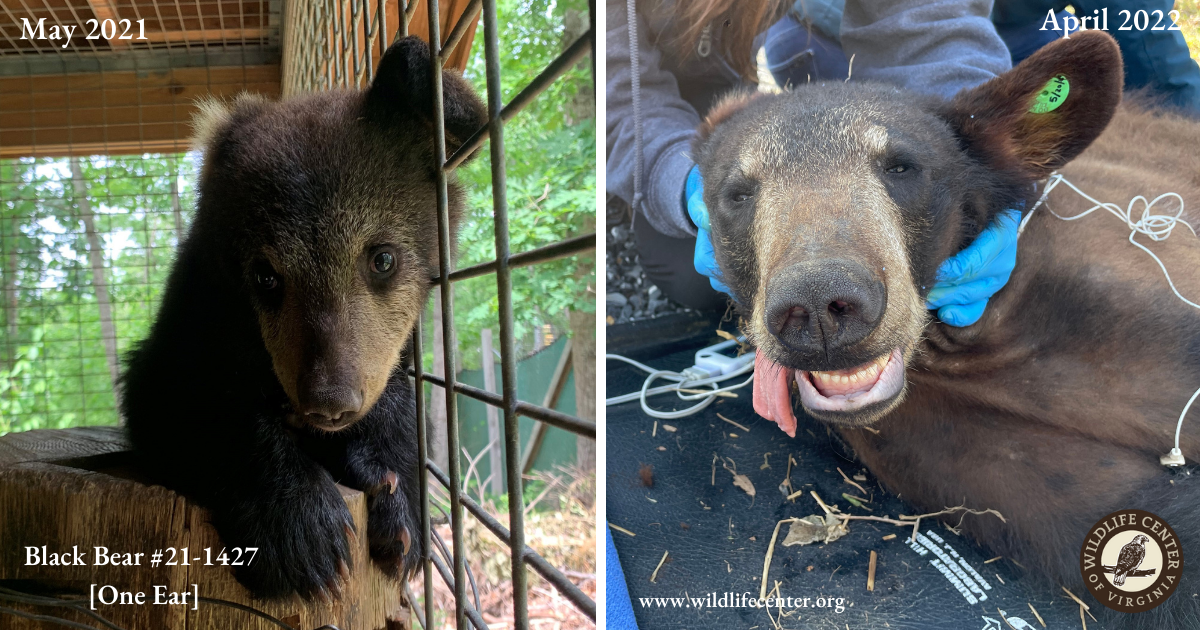 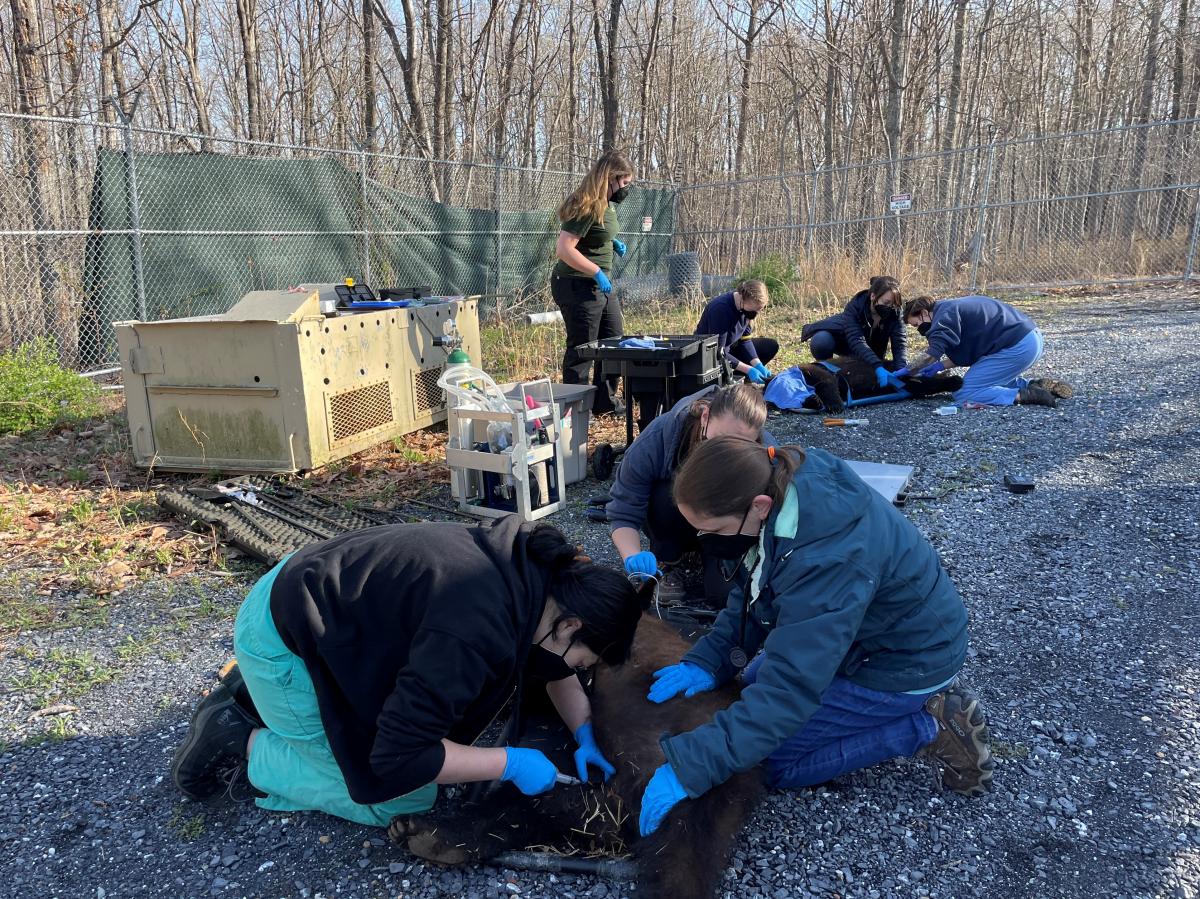 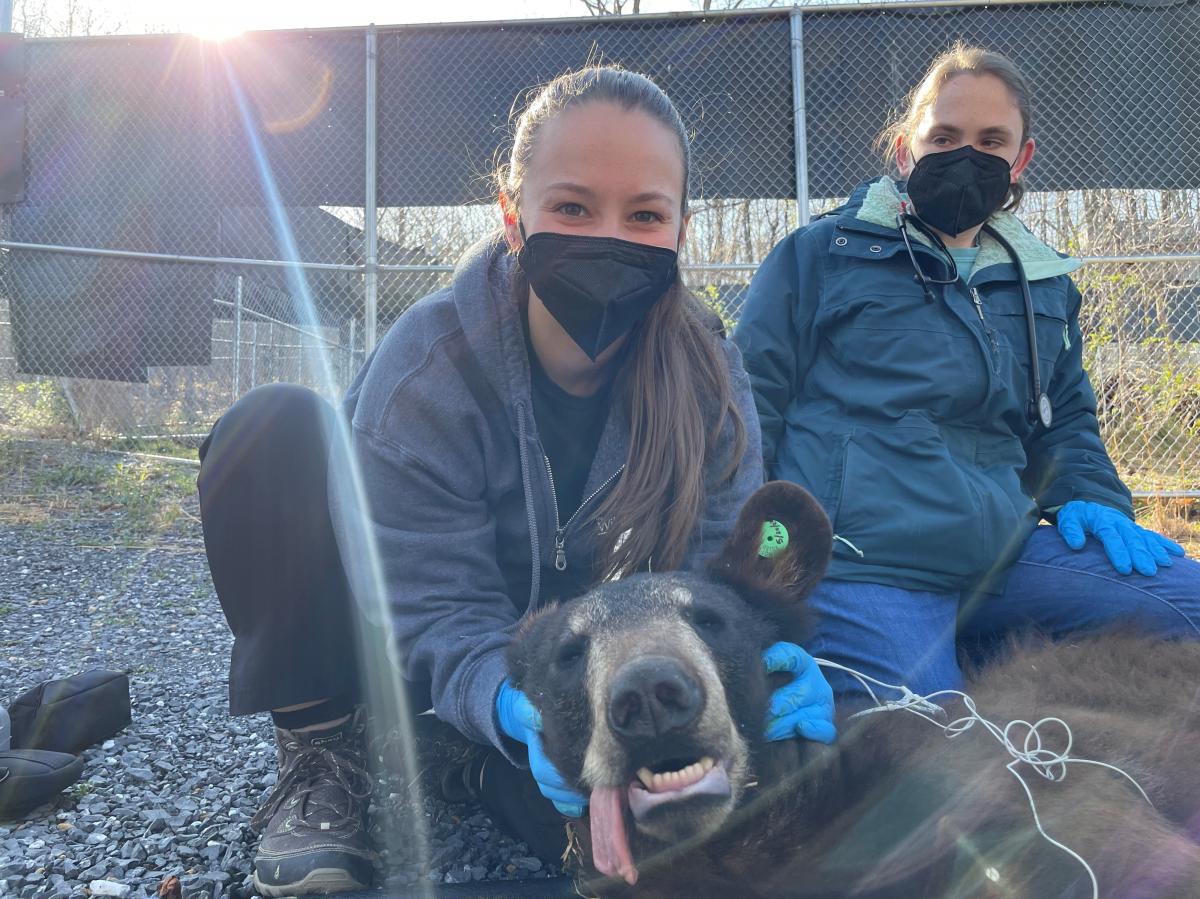 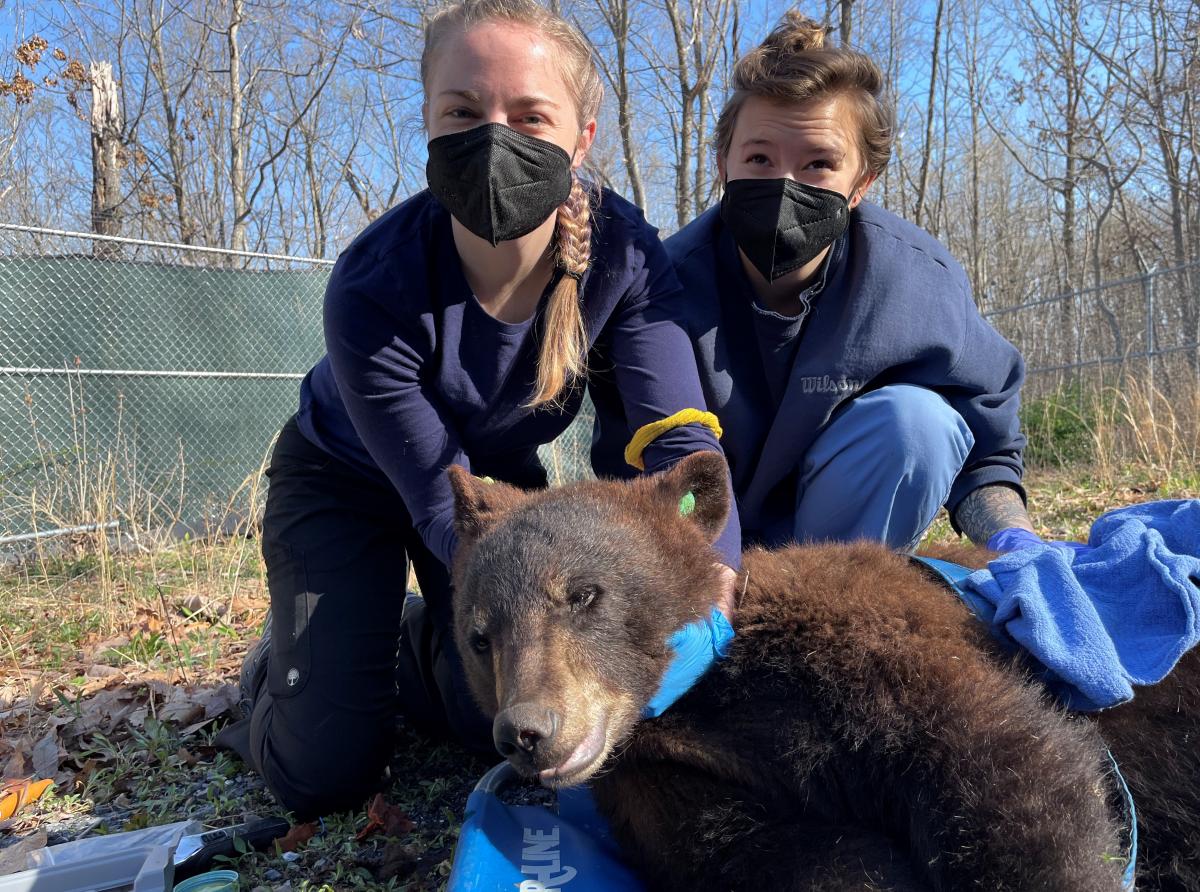 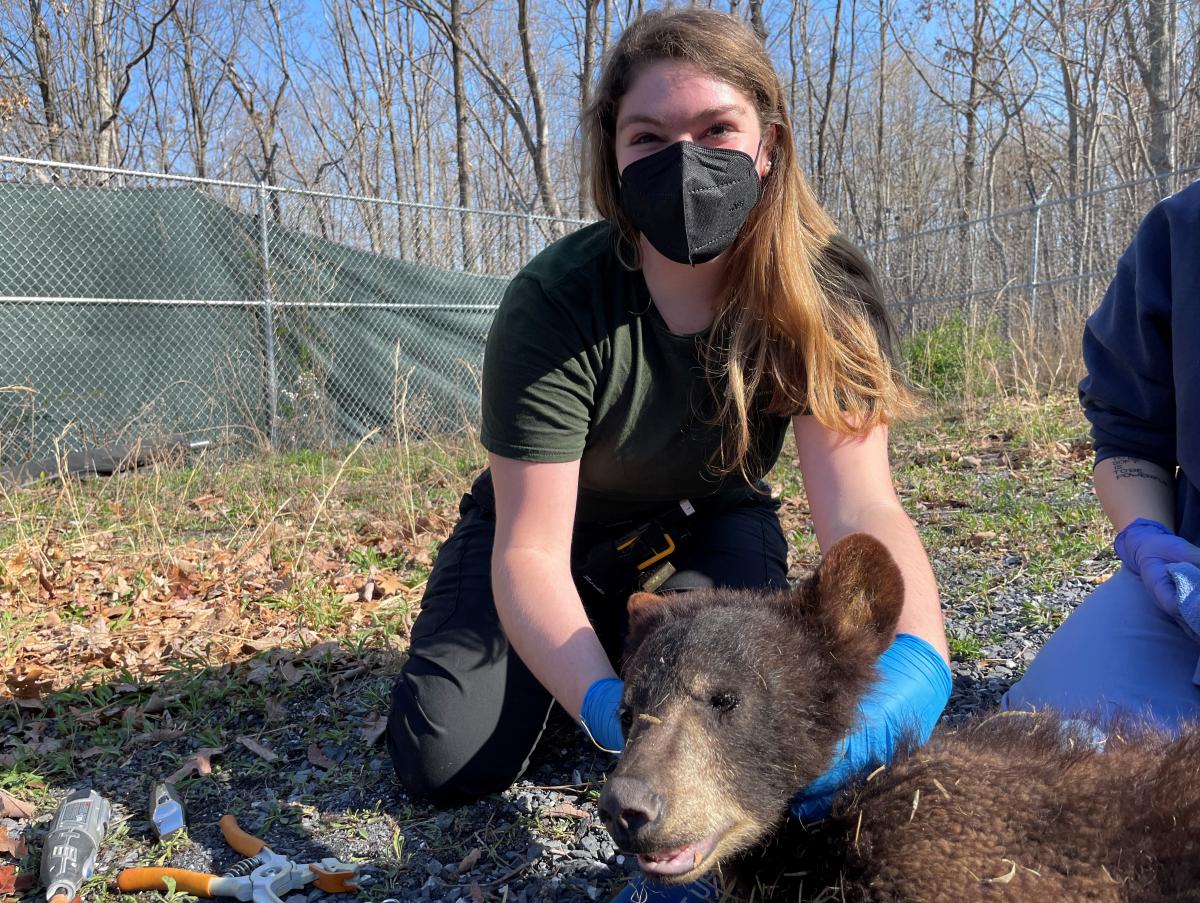 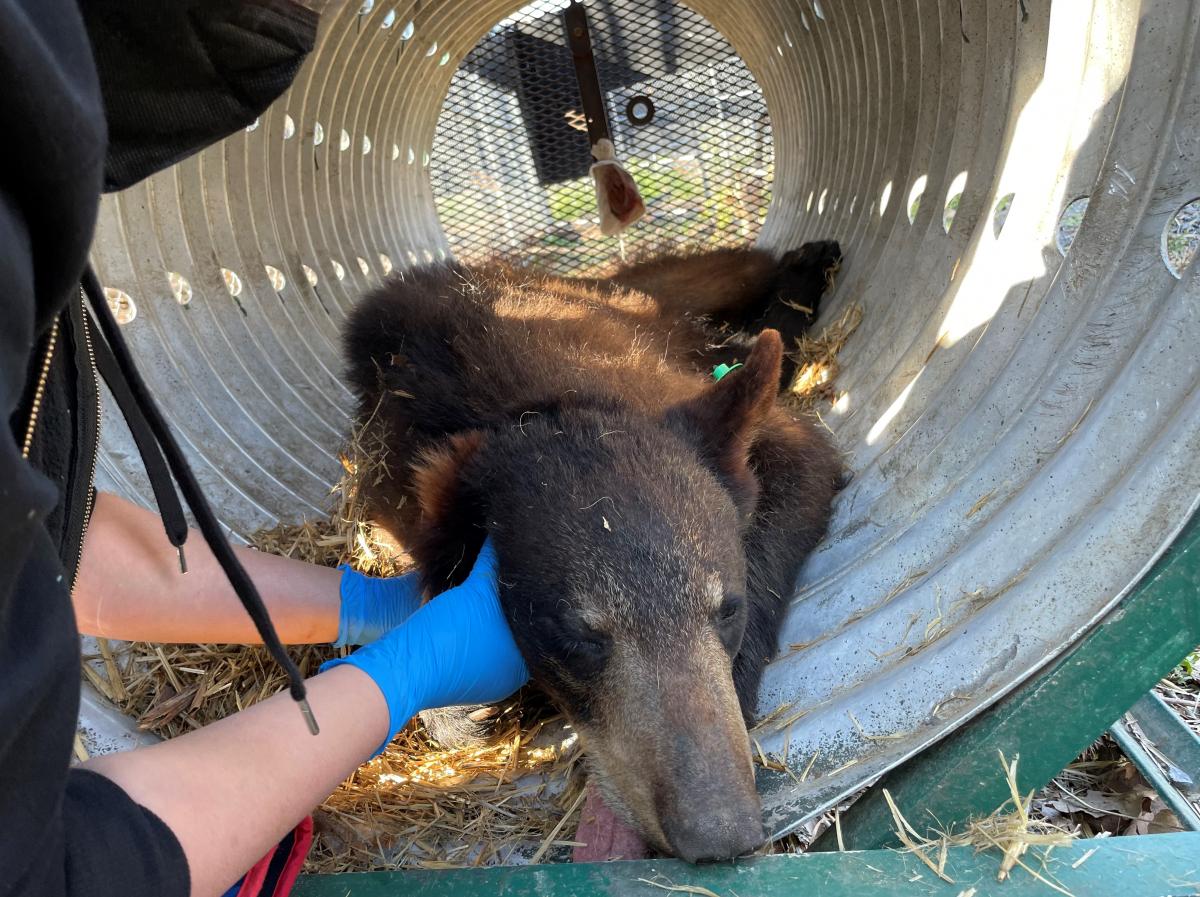 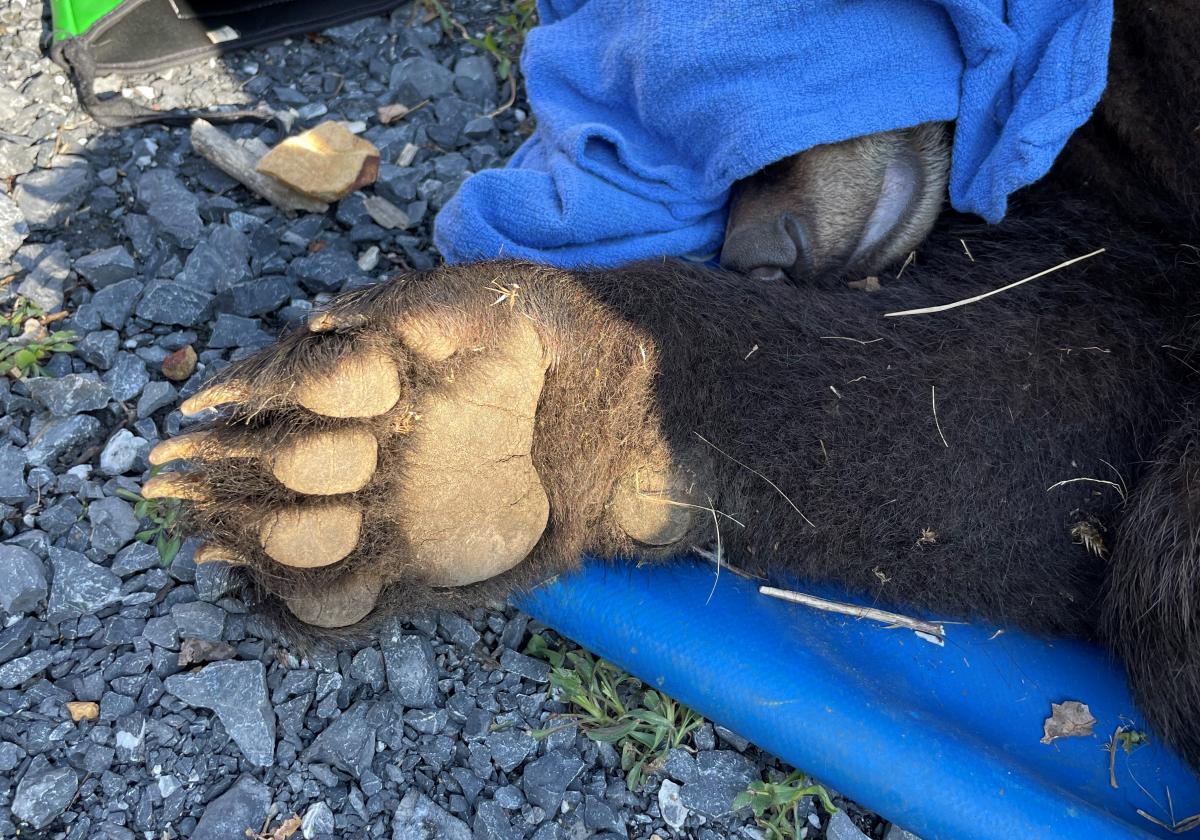 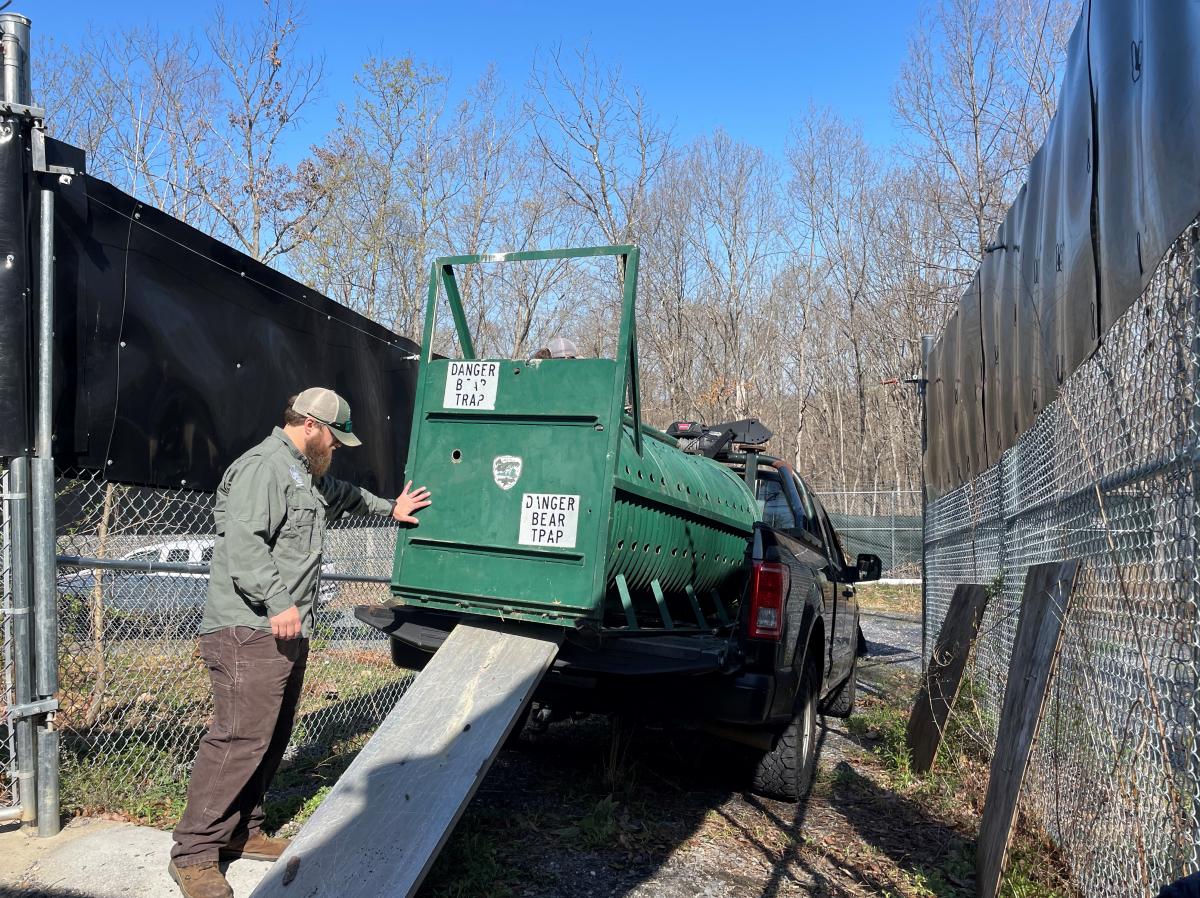 Later in the afternoon, DWR biologist Katie sent these two photos of the release of Black Bear #21-1427 [One Ear]! 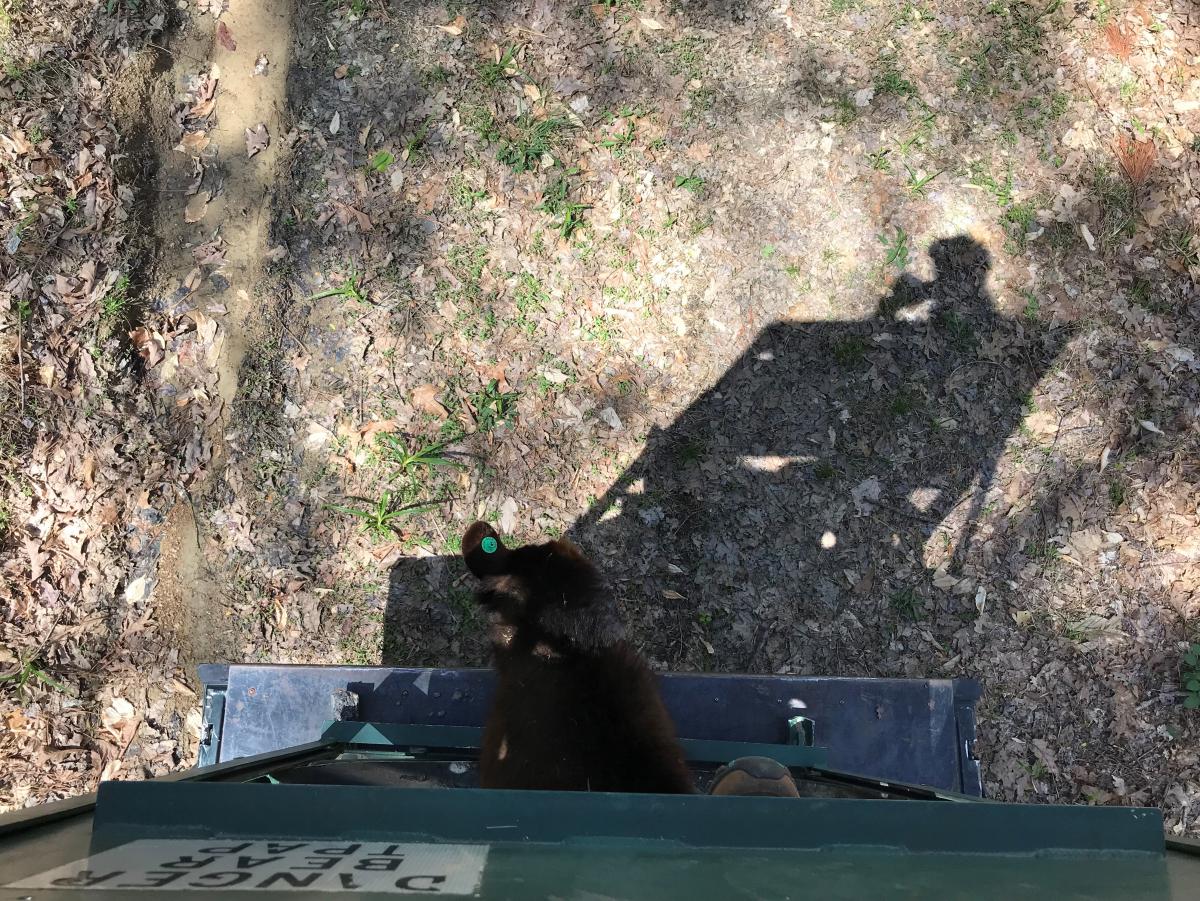 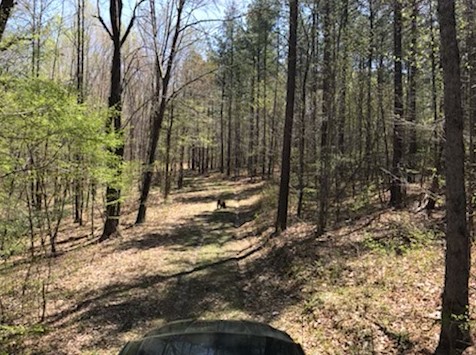 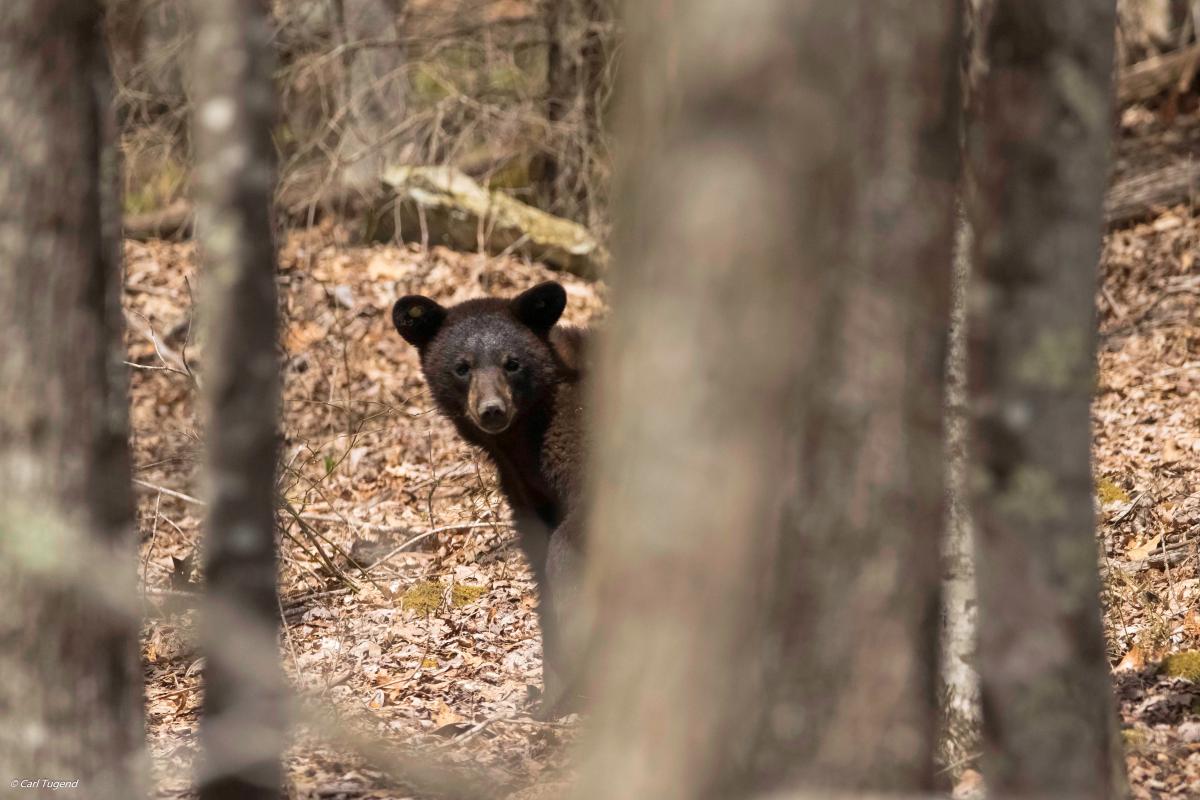 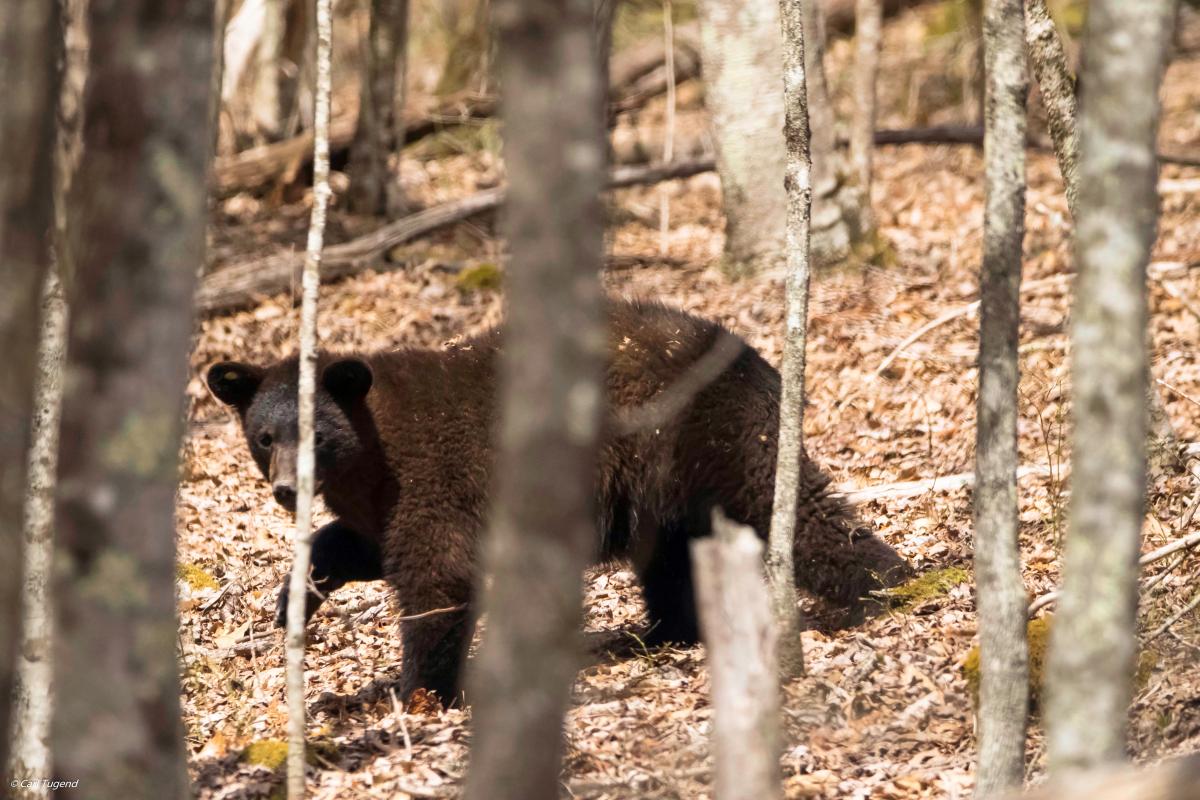 The Center's veterinary and rehabilitation staff have continued to monitor Black Bear cub #21-0545 during the past week. On June 17, Wildlife Rehabilitation Supervisor Kelsey reported a noticeable decline in the cub's pacing behavior, and the decision was made to decrease the amount of medication she's receiving to a single prescription administered during regular meal deliveries. During the past week, all of the cubs in LMI began the process of slowly being weaned off of formula. Over time, the rehabilitation staff will be reducing the amount of formula in the cubs' mush bowls and replacing it with solid foods.

On June 18, the cub was sedated and Center staff applied two lavender-colored tags to her ears. These tags will be replaced when she transitions to the larger Bear Complex in the future, but for now they serve as a way for the veterinary and rehabilitation staff to accurately tell her apart from the other cubs on the Critter Cam and from a distance.

During the past week, the veterinary and rehabilitation staff have continued to monitor Black Bear Cub #21-0545's behavior and paw wounds. Rehabilitation intern Ben again noted that the pacing appears to be happening less, likely a result of the continued medication and a high amount of activity and stimulation within in the enclosure that keeps the cub occupied.

The bandages on the cub's paws -- which were previously applied by Dr. Karra -- were almost immediately removed by the cub and her playmates, and some bleeding was noted over the weekend. While there remain specific wounds on each paw that the staff are keeping an eye on, Ben noted that the overall appearance and healing of the paws seem to be improving.

Throughout the weekend, wildlife rehabilitation intern Ben carefully monitored Black Bear cub #21-0545 and worked through a method of delivering all of the bear's new medication in small servings of tasty formula "mush". On Saturday, Ben noted that the bear seemed calmer and was pacing less, though her paw wounds appeared to be bothering her. On Sunday, the bear also seemed to decrease her pacing behavior and was spotted cuddled with two other cubs on top of one of the climbing stumps in the Large Mammal enclosure.

On Monday, June 7, the veterinary team brought the bear into the clinic to recheck the cub's paws; Dr. Karra reported that most of the wounds were improving, with the exception of one on the middle toe of each front foot. Since the cub was already anesthetized for the examination, Dr. Karra and team placed bandages on the bear's feet to keep the abrasions clean. The cub recovered and was taken back to the Large Mammal enclosure.

The rehabilitation staff will continue to medicate the bear, since this seems to have an impact on the bear's behavior.

The staff have continued to carefully assess Black Bear cub #21-0545 and her increased amount of pacing. Sadly, the medication that the veterinary team started on June 3 seems to have had no effect. The staff will try one more different type of medication to see if that provides any relief. Since the Bear Pen seemed to make no difference for the young cub, the rehabilitation staff moved the bear back to the Large Mammal enclosure for observation.

Rehabilitators Kelsey and Shannon carefully assessed the bear in the right half of the Large Mammal enclosure on the evening of June 3. One additional variable that the staff wanted to assess was if the presence of humans (particularly the bear's caregivers) made any difference in her behavior; if the bear was pacing because she wanted to be with humans, this would suggest that the cub was habituated to humans, but at least would explain the behavior. After quietly sitting in the enclosure with the bear for a period of time, offering food intermittently, the rehab staff concluded that the bear was not seeking the presence of humans; the young cub continued pacing.

After a period of time, they let the cubs intermingle once again throughout the Large Mammal Isolation enclosure. The bear took a brief nap on the elevated climbing platform in the right half of the enclosure, and then woke up and began pacing again.

The new medication will continue to be offered for several days; the staff hope that they may be able to move the cub up to the Bear Complex, if one of the transition areas can be utilized in between different repair jobs. Sadly, the staff have not been able to determine any causes of this distressing behavior.