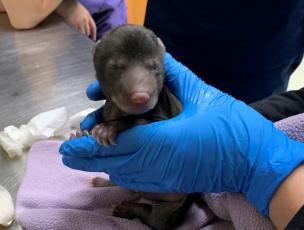 On January 22, an infant Black Bear cub was found in Craig County by power line workers; the cub was on top of a brush pile and was nearly frozen. The workers thought the cub was dead at first, but after they warmed the infant bear, she started crying.

The Department of Game and Inland Fisheries took the cub and immediately began looking for potential foster mother bears. Through their radio-collaring project, DGIF biologists are able to locate wild female bears who have given birth in their winter dens. Female Black Bears with newly born cubs will often accept orphaned cubs and raise them as their own. Biologists are always careful to assess each situation to ensure cubs are the same size and age, and that they aren't overburdening a mother bear with more cubs than she can successfully raise.

Before the cub was admitted to the Center on January 28, DGIF biologists visited two radio-collared female dens to attempt fostering. Unfortunately, those females did not have cubs at the time so the orphaned cub could not be placed with these females. DGIF will continue to check on other radio-collared females in the next week. 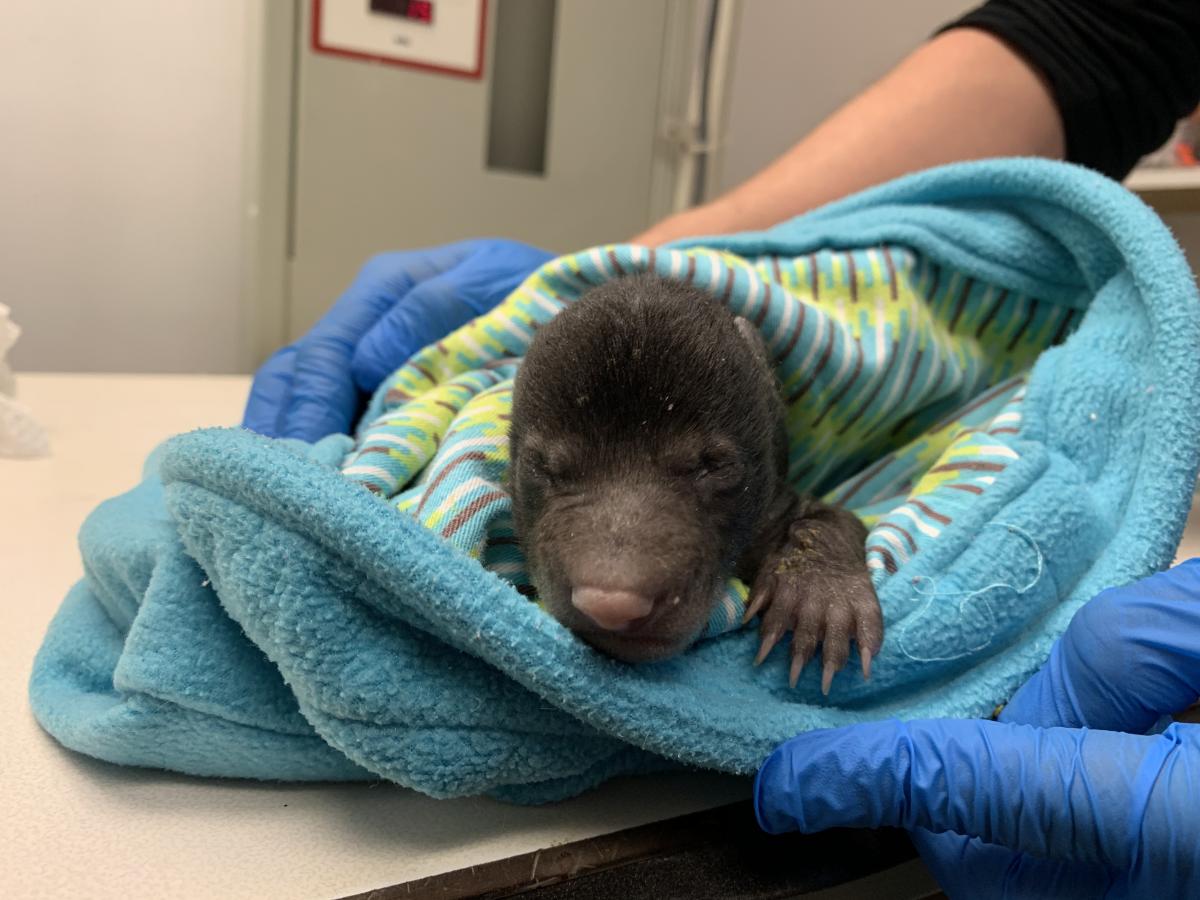 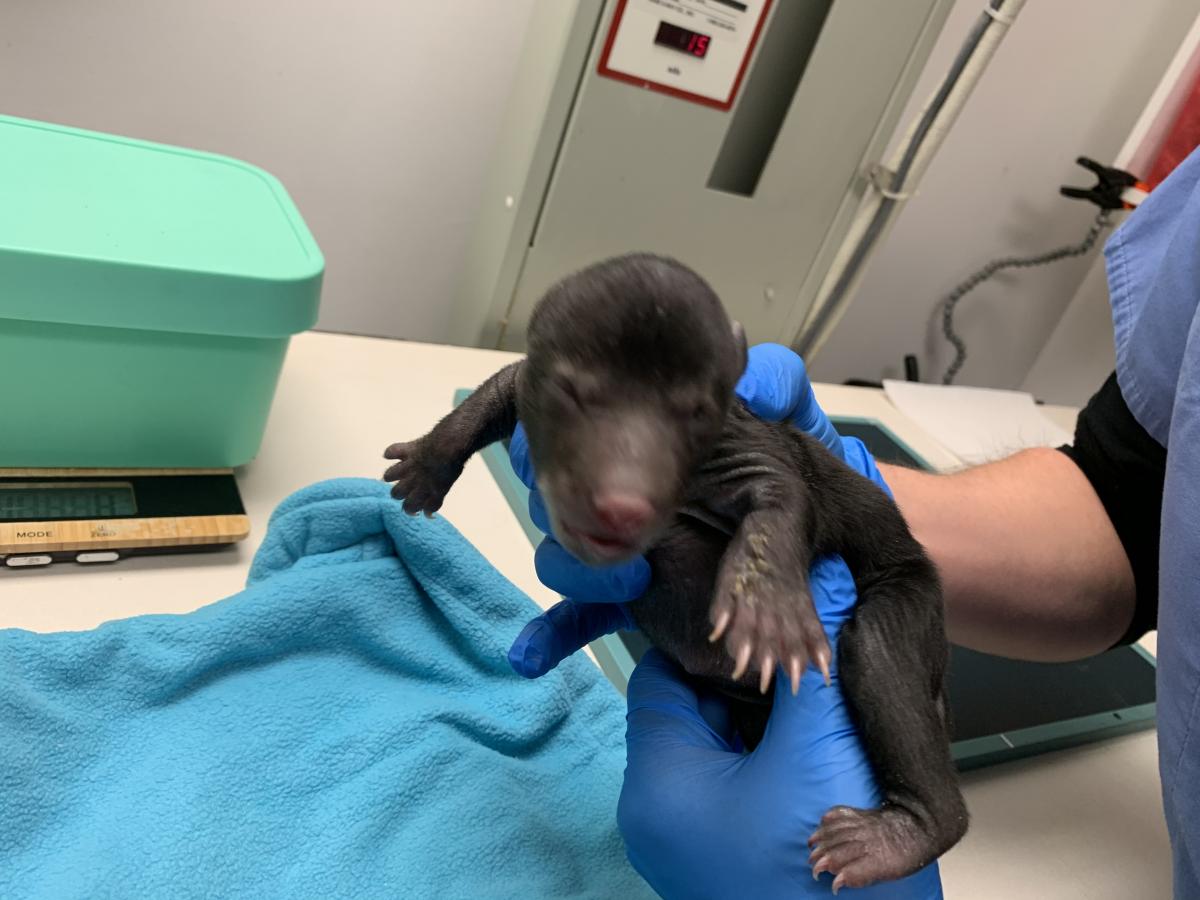 Dr. Ernesto, the Center's hospital director, found that the small female cub was bright and alert and in good body condition. There were no significant findings on the physical examination and radiographs, except mild dehydration and minor wheezing sounds in the bear's right lung, likely due to a small amount of aspirated formula. The bear was given fluids and was set up in one of the Center's incubators.

The rehabilitation staff began bottle-feeding the cub later that same afternoon; they will manage a 'round-the-clock feeding schedule during the time that the cub spends at the Center. The cub weighs 566 grams and is the smallest cub that has been admitted in recent years.

This foster technique has worked many times in recent years; often, DGIF can foster a cub within a matter of days if a suitable match can be found. Sometimes, orphaned cubs are admitted to the Center for care when additional time is needed to find a suitable foster mother. In past years, the Center has helped temporarily care for several cubs that were eventually fostered, including cubs in 2015 and 2017.

The rehabilitation staff are getting to know this tiny bear and her feeding preferences; by the noon feeding on January 29, wildlife rehabilitator Kelsey reported that the cub was "eating like a champ" and had already gained 12 grams.

Your donation will help provide care to this orphaned Black Bear cub ... and the 3,000 other wild animals the Wildlife Center will receive this year. Thank you!

The DGIF biologist reported: “The sow held tight in her den and immediately scooped this little cub in when I placed her near the den entrance. The cubs in this den (we think there are two) are probably about two- to three-weeks-old.

“This is a large sow (225+ lbs) so she should be able to take care of them all! I rechecked her this evening approximately 4.5 hours post-foster and they are all tucked in the den quiet as can be … perfect scenario!

“Unfortunately we didn’t get any pictures/footage today as it was raining pretty hard and we had to be quick … that little cub was a loud one and I didn’t want her cries making the sow get nervous and run out.”

DGIF biologists will pick up cub #20-0084 on Wednesday morning and we hope his fostering attempt will be as successful as this one! 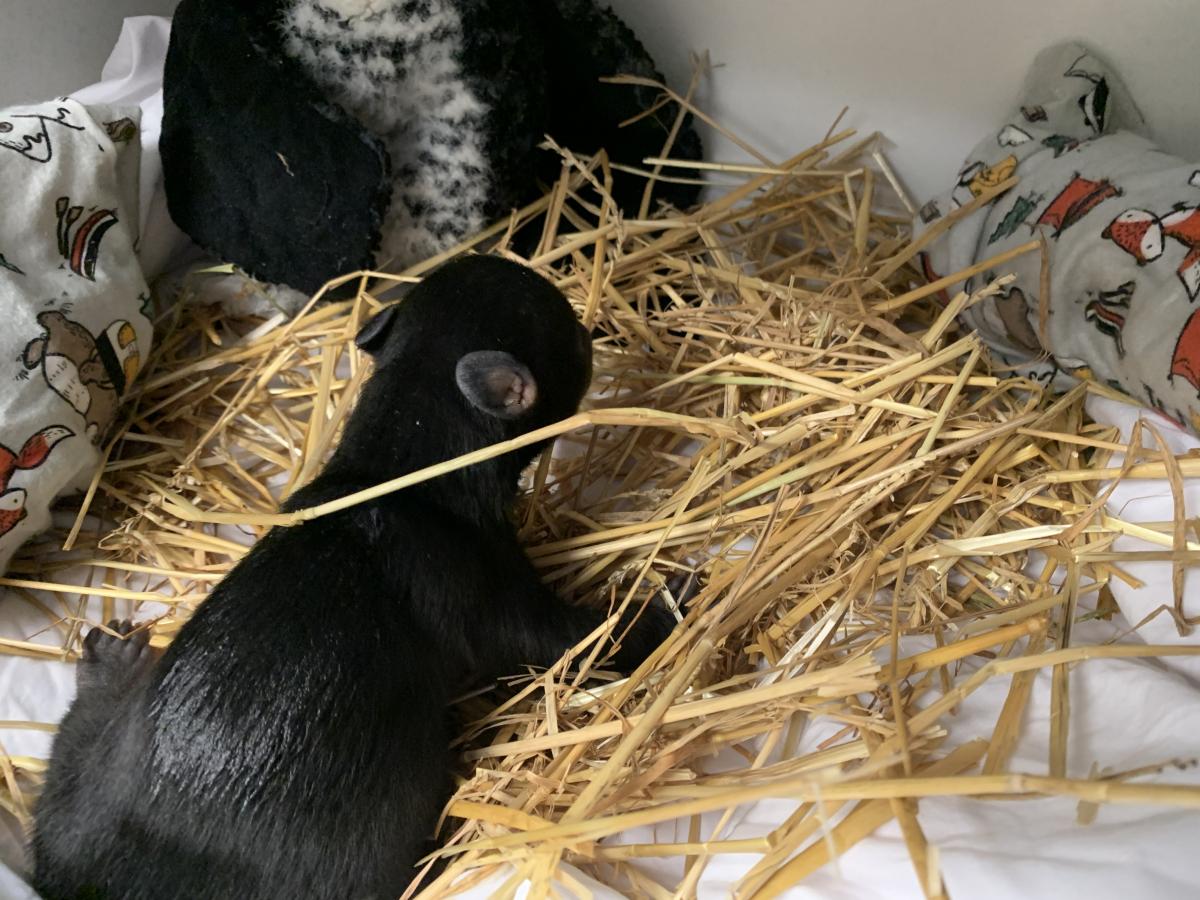 Prior to her successful fostering -- the rehabilitation staff took a video of her "humming" as she ate!

The two Black Bear cubs did well at the Center over the weekend; they were introduced to one another on Friday, and spent the weekend in the same incubator, on the same schedule of bottle-feeding. 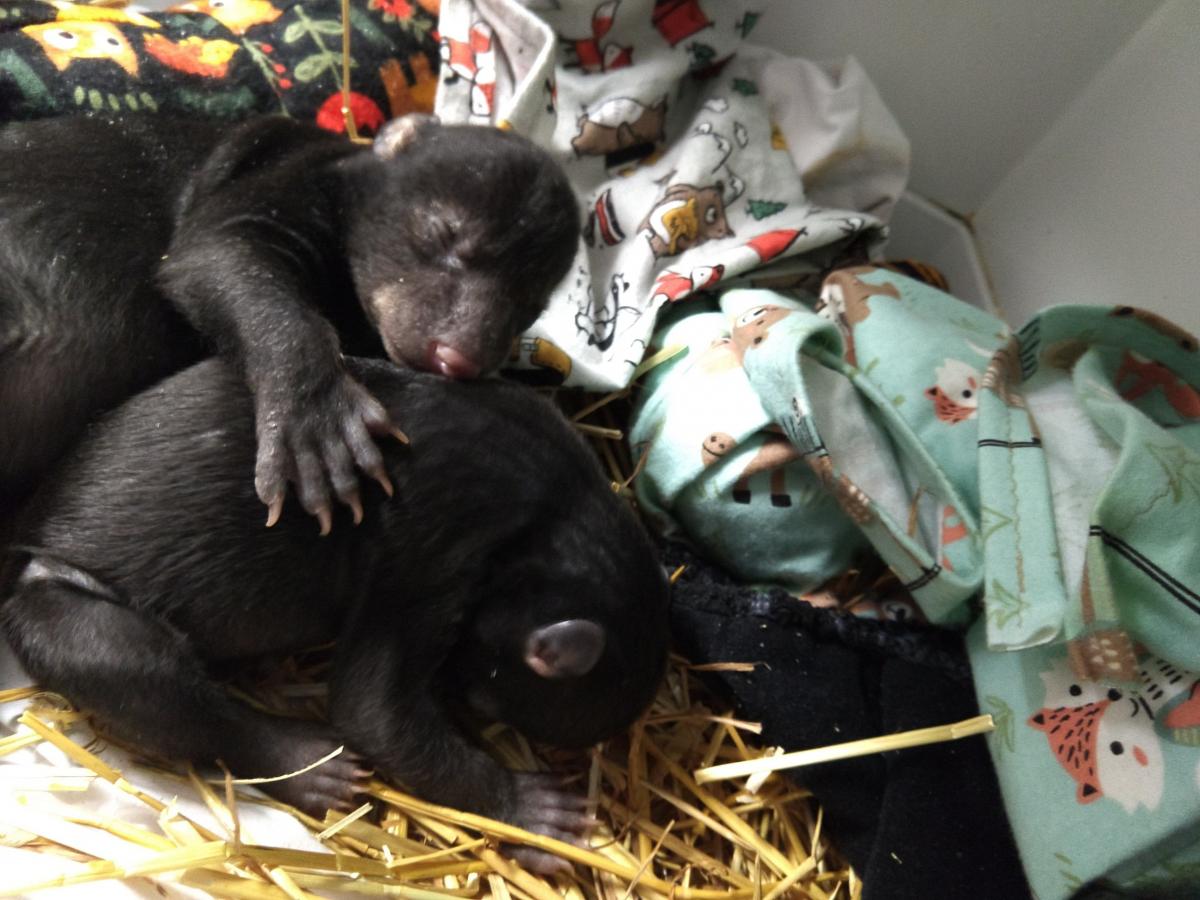 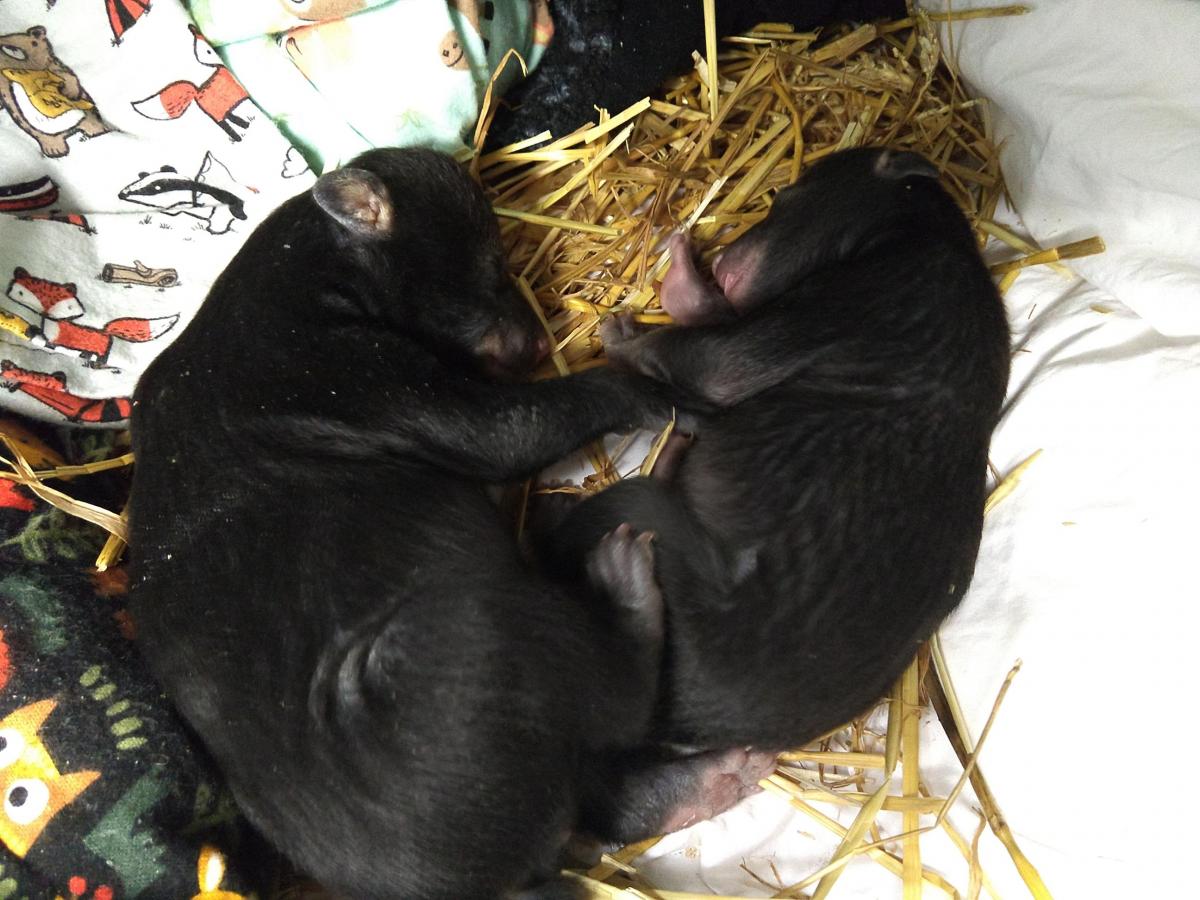 On the morning of February 10, a DGIF biologist came to the Center to pick up the female cub, #20-0064, for a fostering attempt. Last week, DGIF reported that they located two active den sites, both with sows and cubs. Black Bear cub #20-0084, the male cub, will be picked up on Wednesday, February 12, and will hopefully be fostered at the second den site. 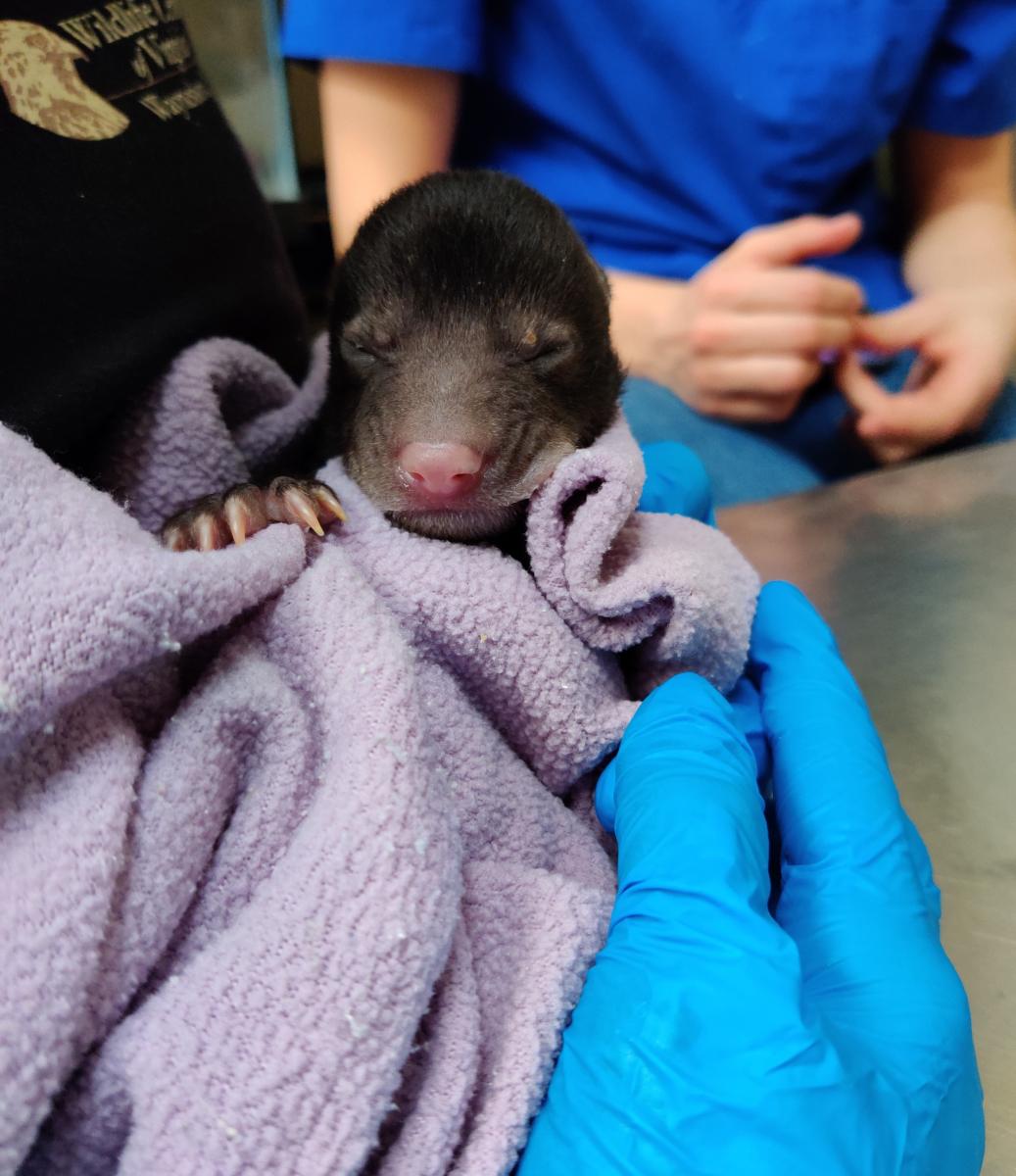 Black Bear cub #20-0064 has been eating well for the rehabilitation staff at her ‘round-the-clock bottle feedings; the bear cub now weighs 705 g [a 139 gram increase since admission weight]. The staff have not yet heard from DGIF biologists on the search for a surrogate bear mother.

My hobbies include eating, and thinking about the next time I will be eating. . . . Black Bear cub patient #20-0064 continues to eat well for the rehabilitation staff at her round the clock bottle feedings; the bear cub now weighs 705 grams [a 139 gram increase since admission weight]. The staff have not yet heard from DGIF biologists on the search for a surrogate bear mother. . . . #wildlife #bearsofinstagram #wildlifeconservation #conservationeducation #wildlifehospital #wildlifemedicine #blackbearcub