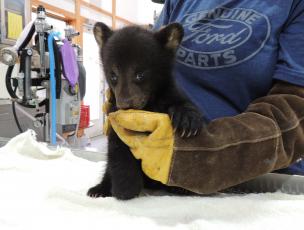 On April 10, a citizen found a lone bear cub near a road. There was no sign of a sow or any other cubs nearby. The Virginia Department of Game & Inland Fisheries was called, and after staying the night with a permitted wildlife rehabilitator, the cub was transported by VDGIF officers on the morning of April 11.

Wildlife rehabilitator Brie and Dr. Ernesto examined the male cub when he arrived. The cub was bright and alert, and didn't have any injuries. Weighing in at 2.4 kg, the cub is the largest of the three currently residing at the Wildlife Center. The cub will be introduced to the two other cubs tonight. 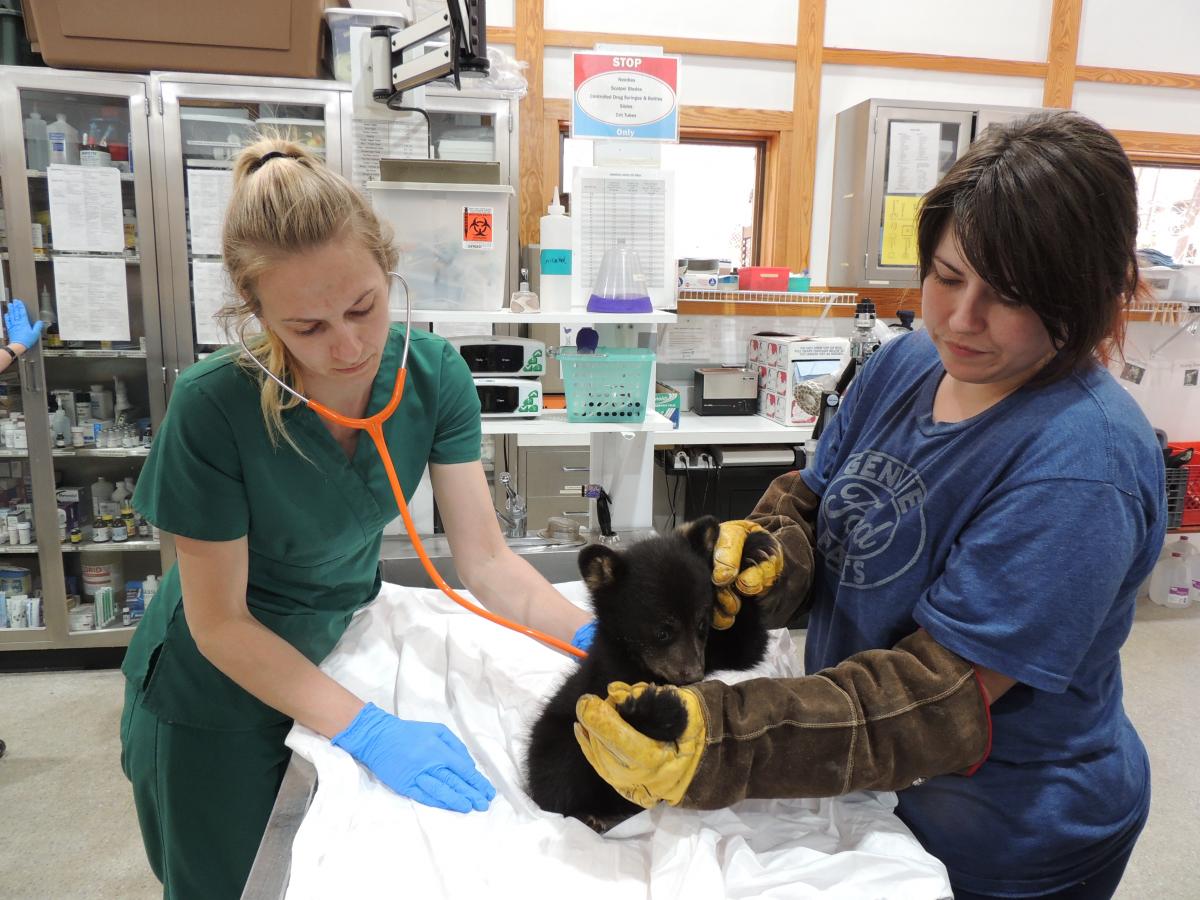 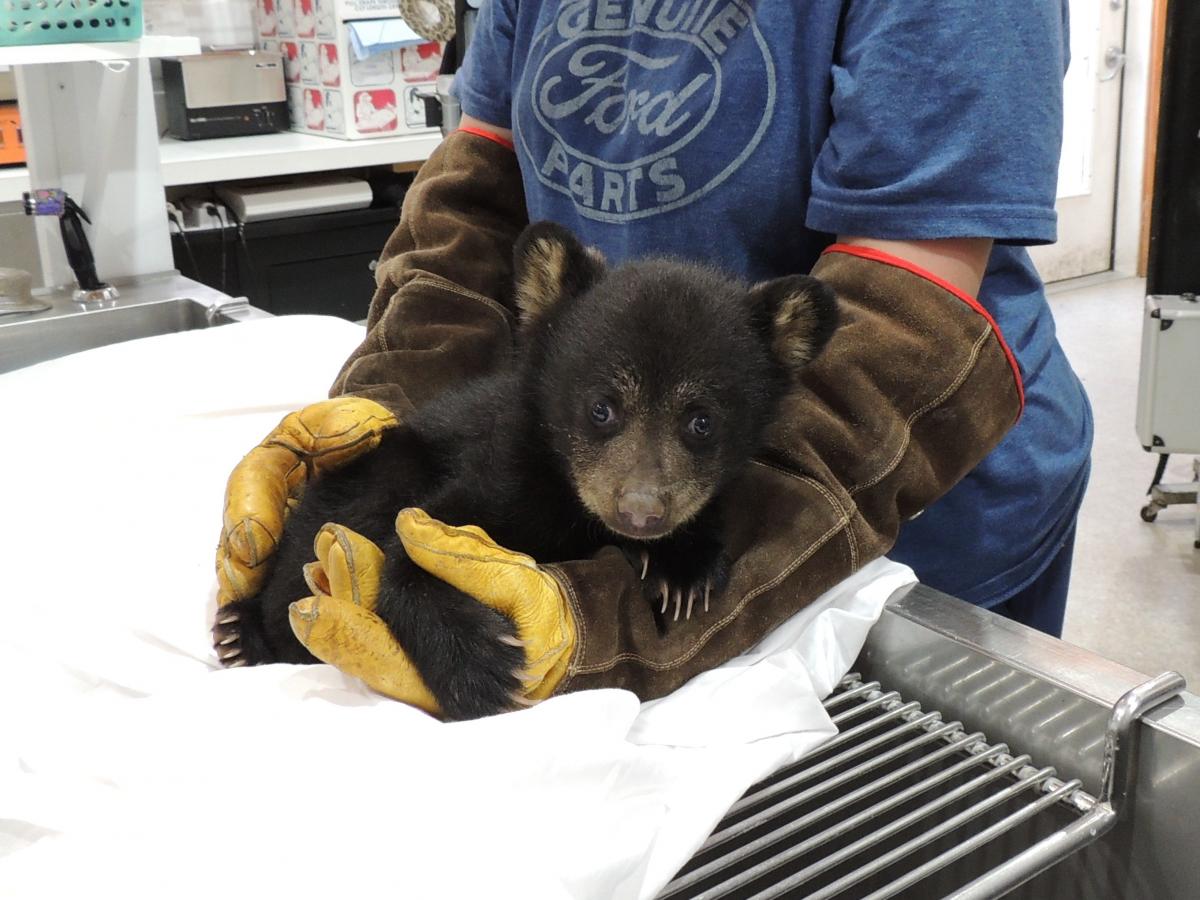 Your donation will help provide this young bear cub with special care. Thanks for your support!

On the morning of Thursday, April 5, the Wildlife Center veterinary team was able to successfully dart and sedate Black Bears #17-0744 [Yellow Tag], #17-0411 [Green Tag], and #17-0374 [Red Tag]. The bears each received an examination and skin scraping; everything was within normal limits. Each bear received a green ear tag in both ears prior to loading into the DGIF truck for release.

Dr. Peach, wildlife rehabilitator Brie, wildlife rehabilitation intern Shannon, director of outreach Amanda, and outreach coordinator Raina were able to attend the release with two DGIF biologists. Red Tag, who was loaded last and separated in the bear trap from the other two bears, appeared to be the most alert and was released first. The bear was still a little sleepy, but walked off into the woods. 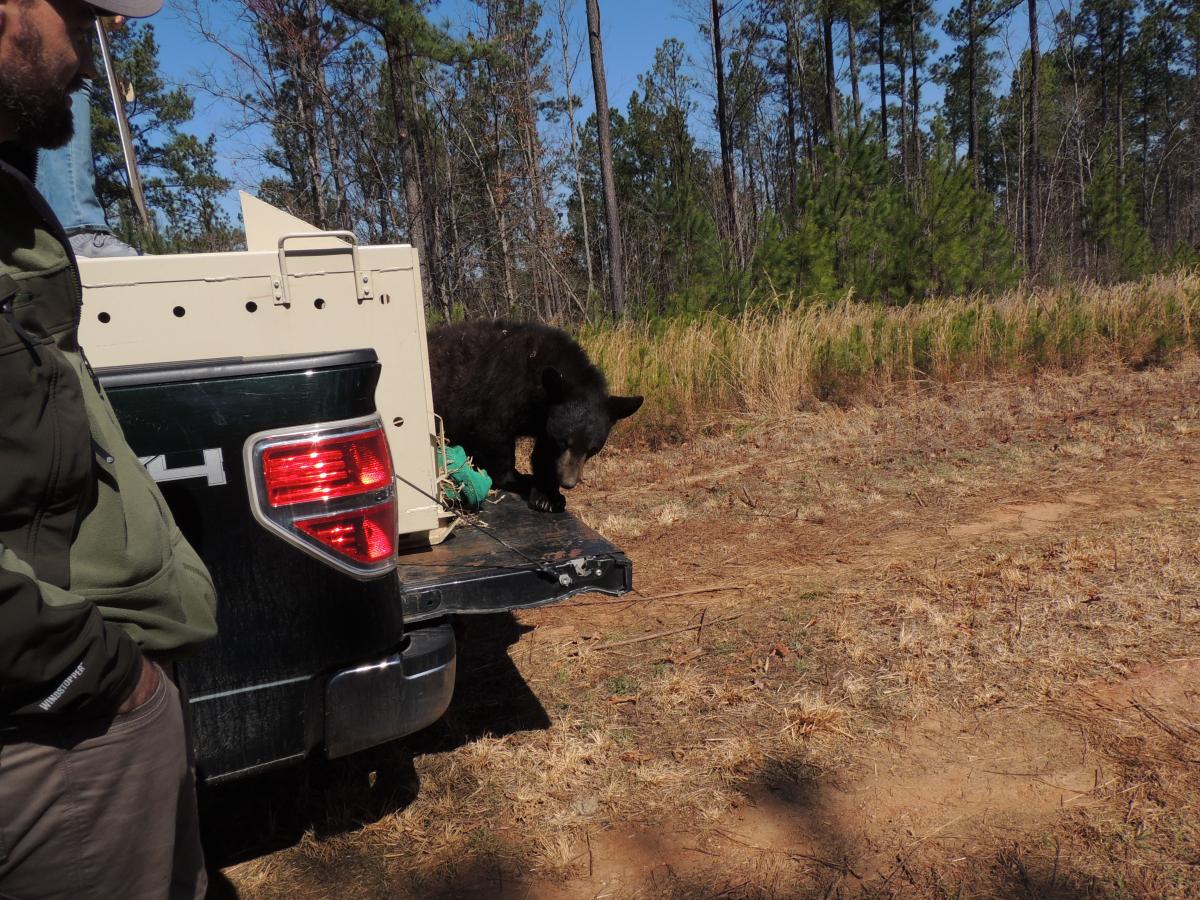 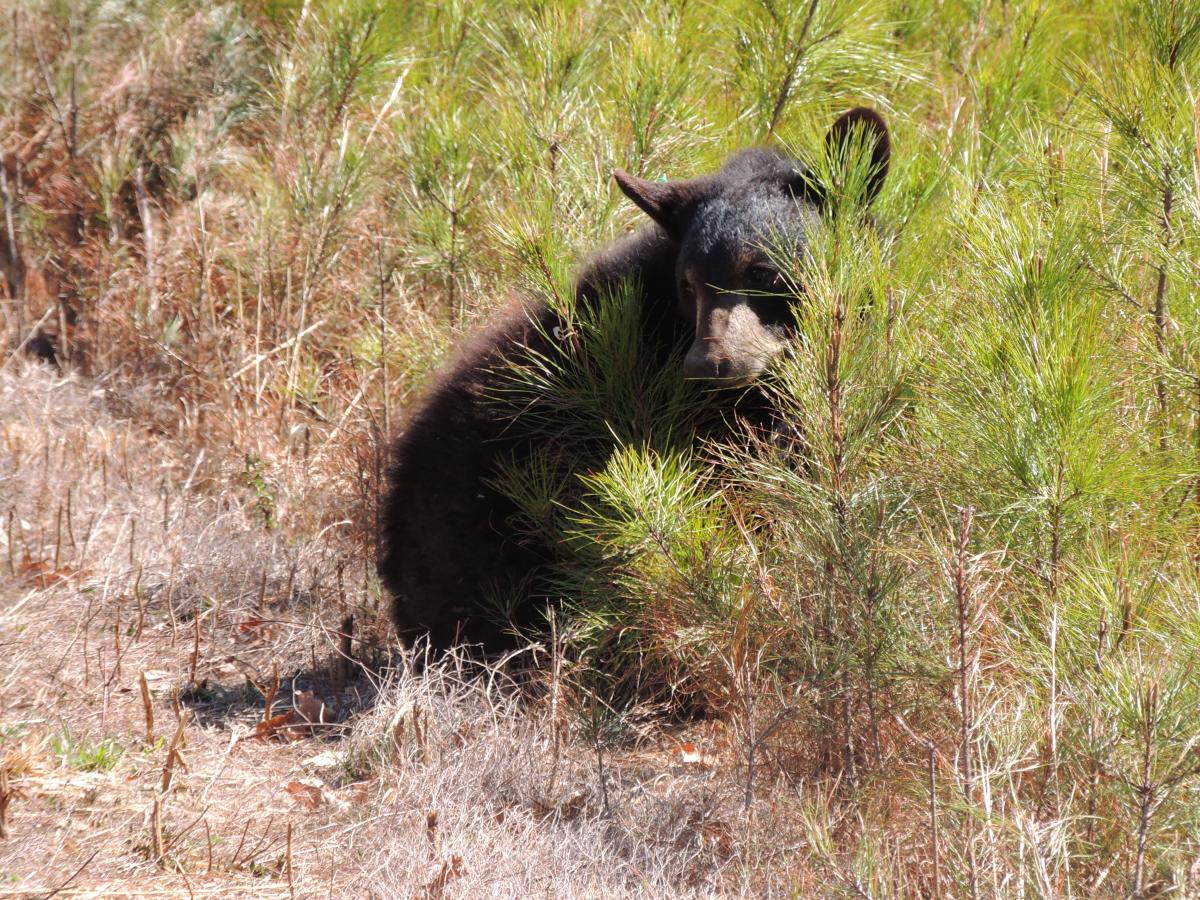 Dr. Peach “reversed” the other two bears’ sedation with an additional injection of drugs, and the team waited for about 20 minutes while the bears woke up. Both were still a little wobbly and were slow to jump out of the truck. Once they did, they both walked off into the woods. 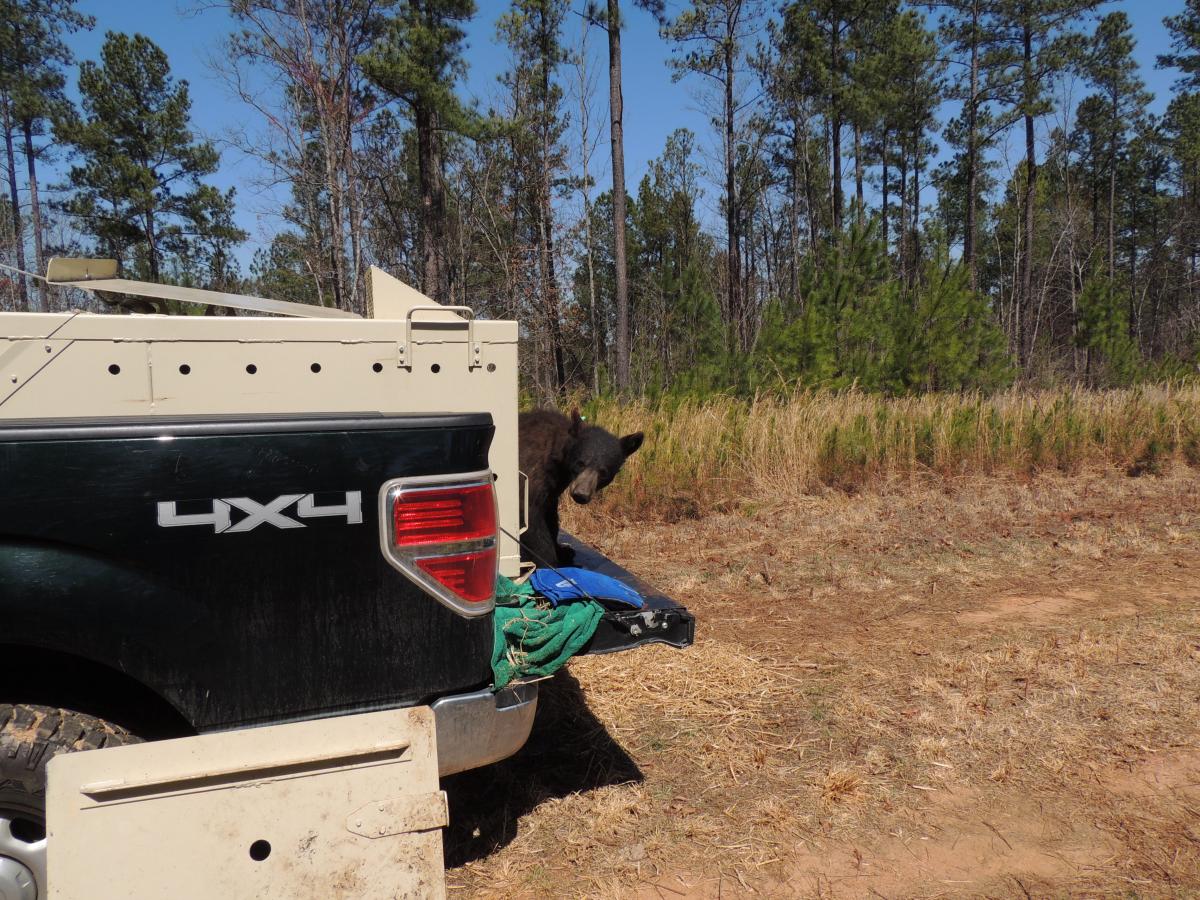 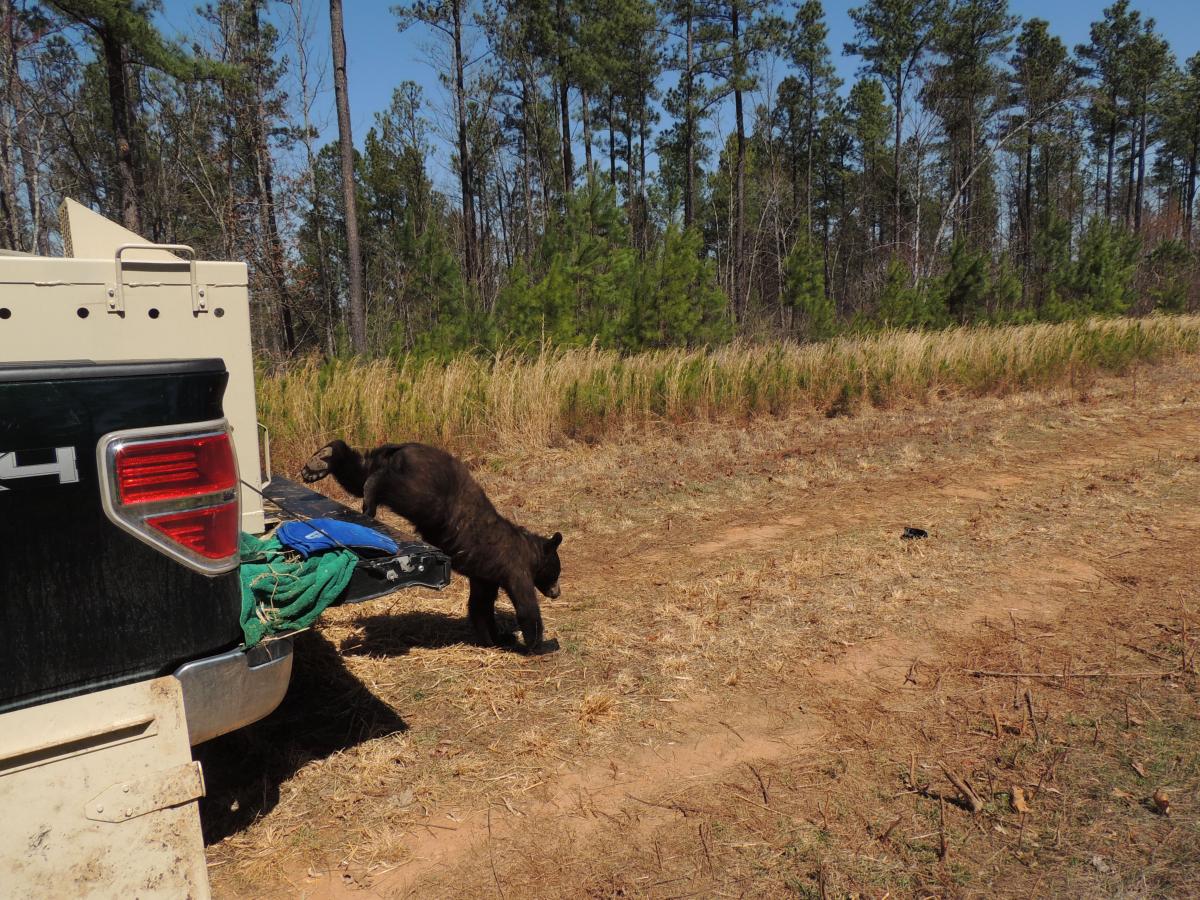 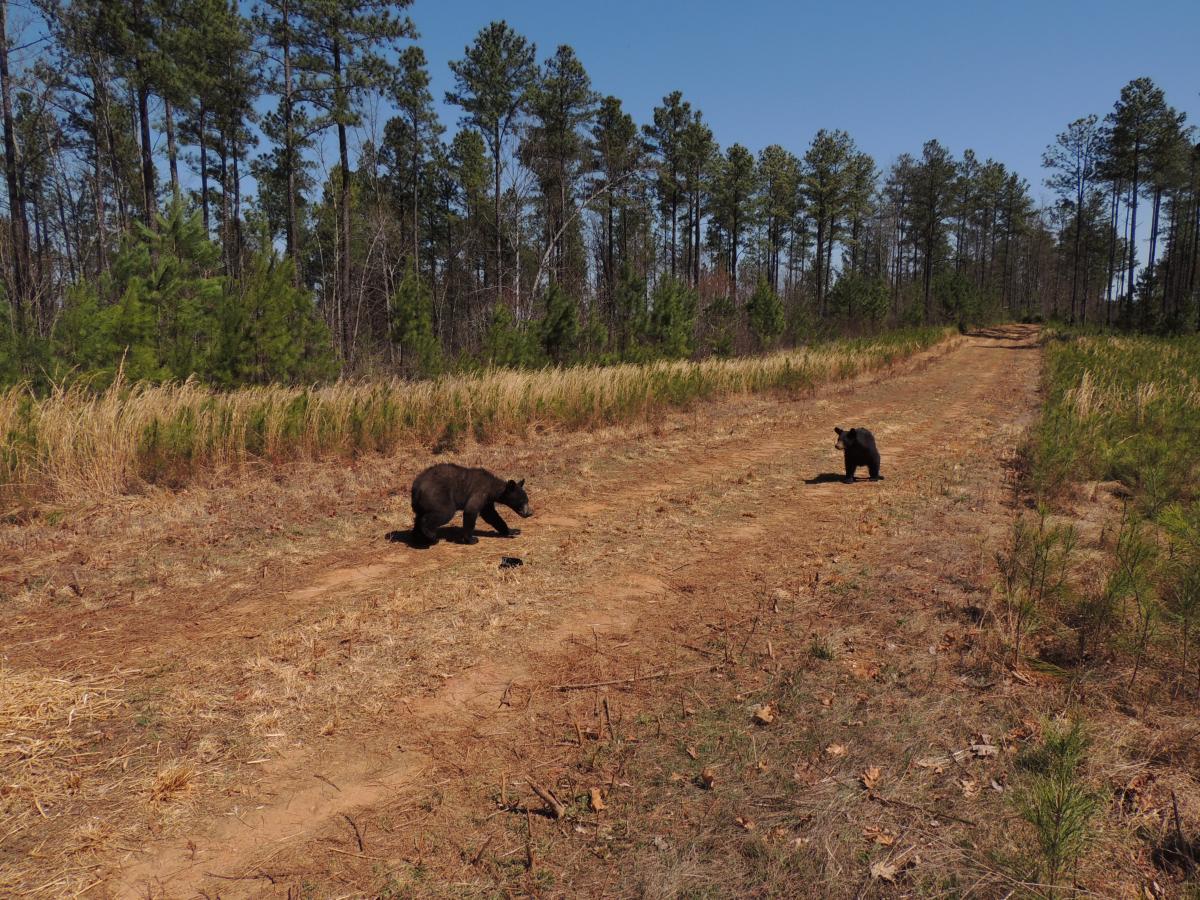 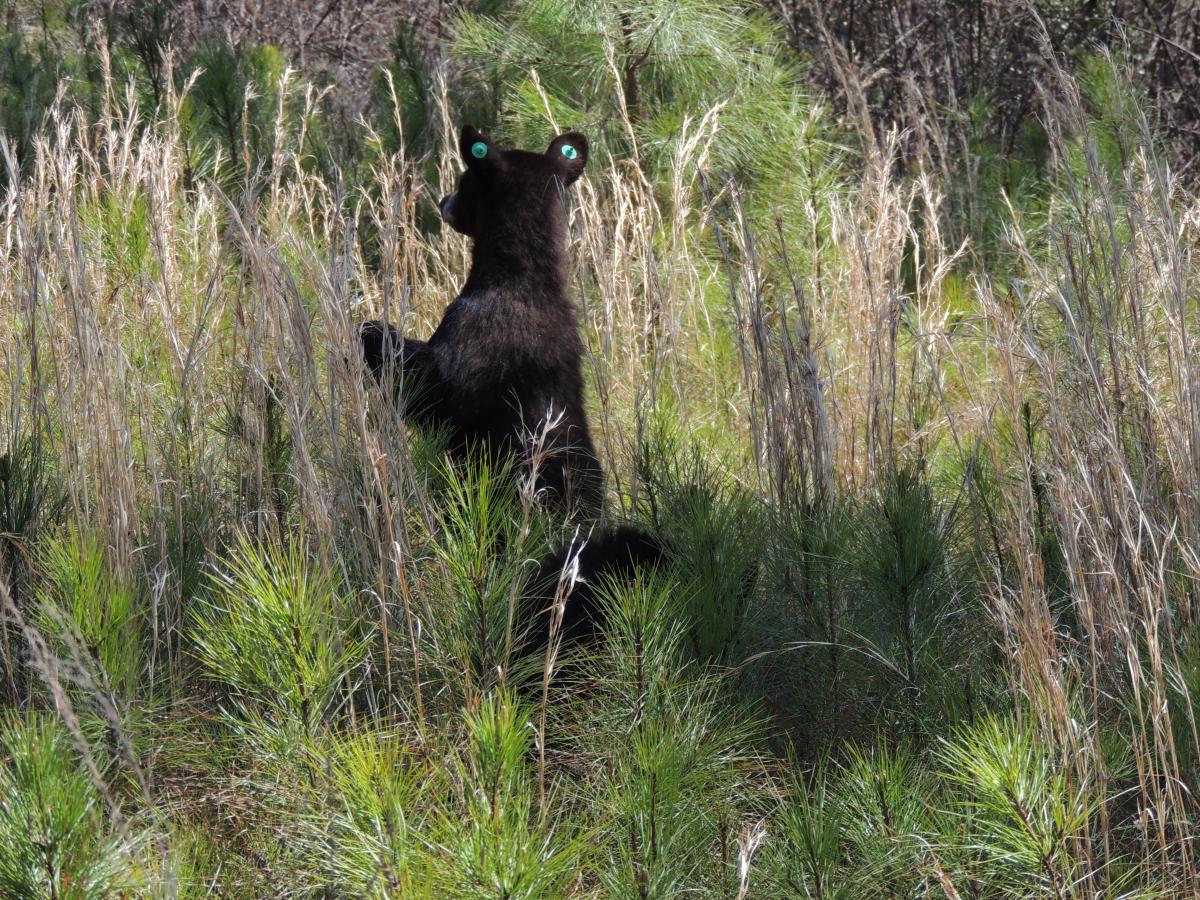 After the release team came back to the Wildlife Center, Double Orange Tags [#17-2065] and Double Yellow Tags [#17-2035] were darted, sedated, examined, tagged, and loaded into the DGIF truck. They'll be released early this evening. 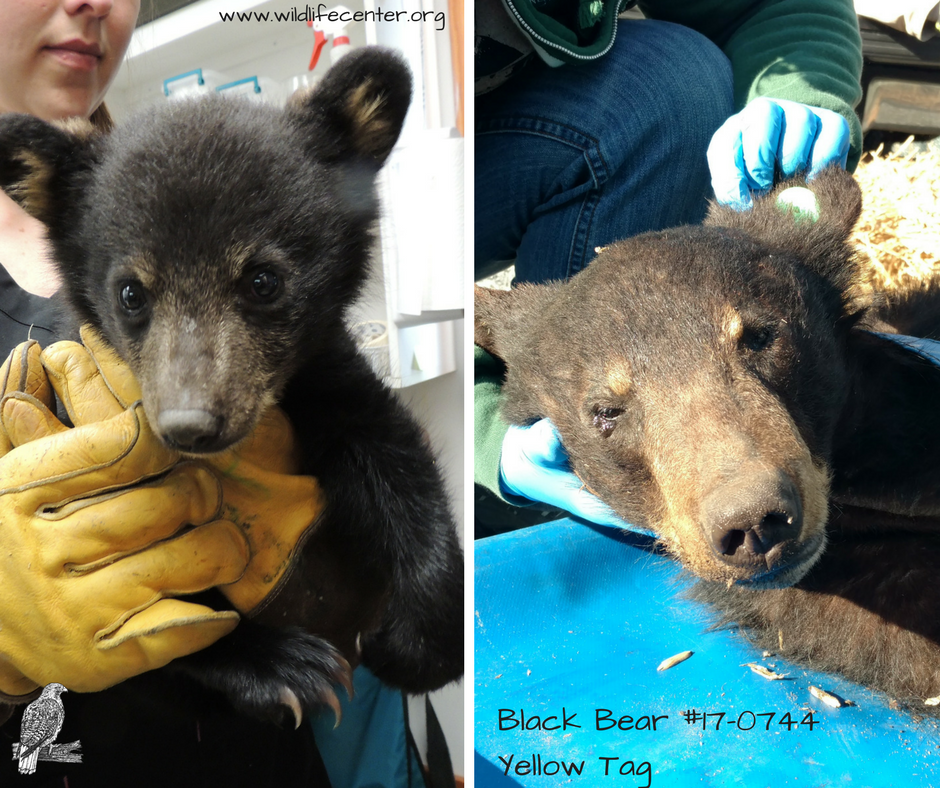 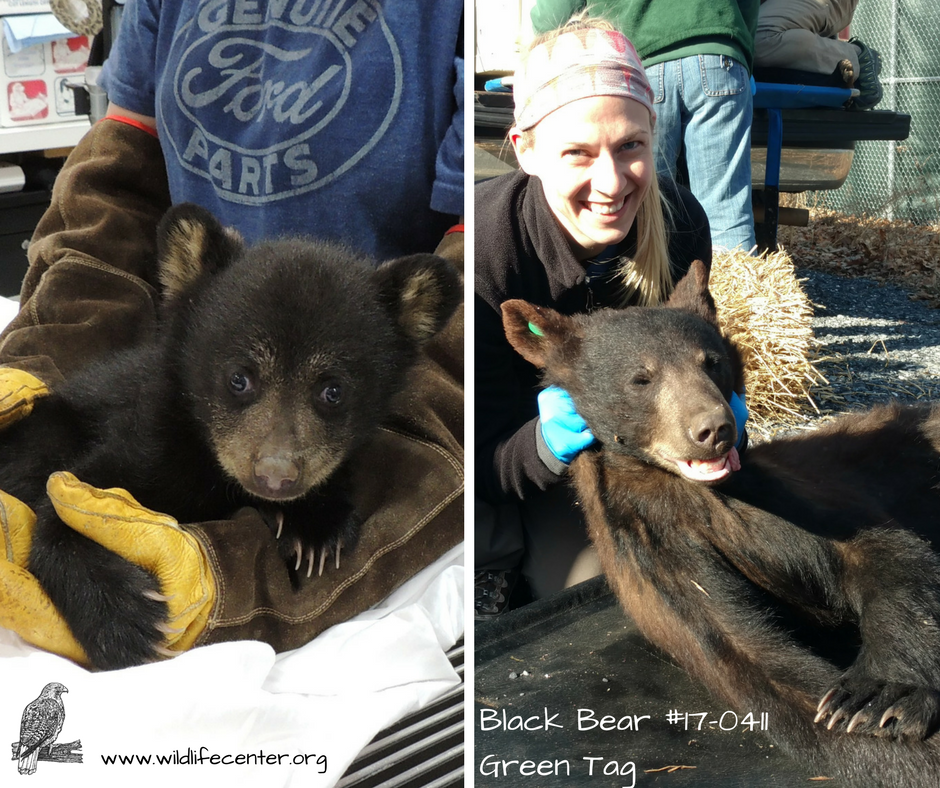 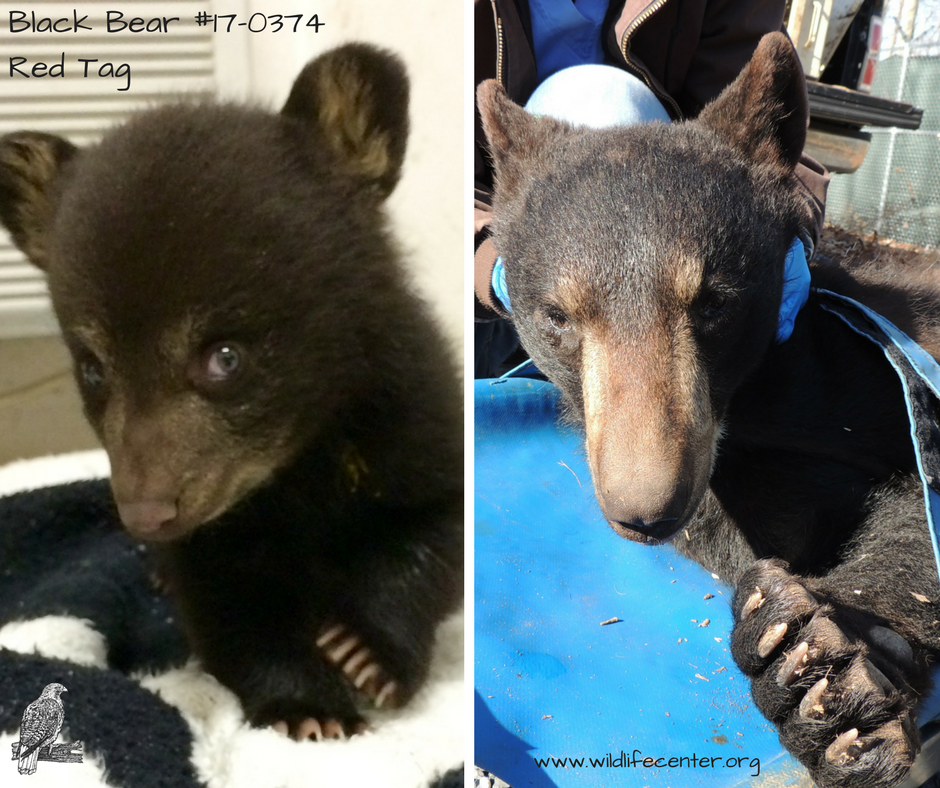 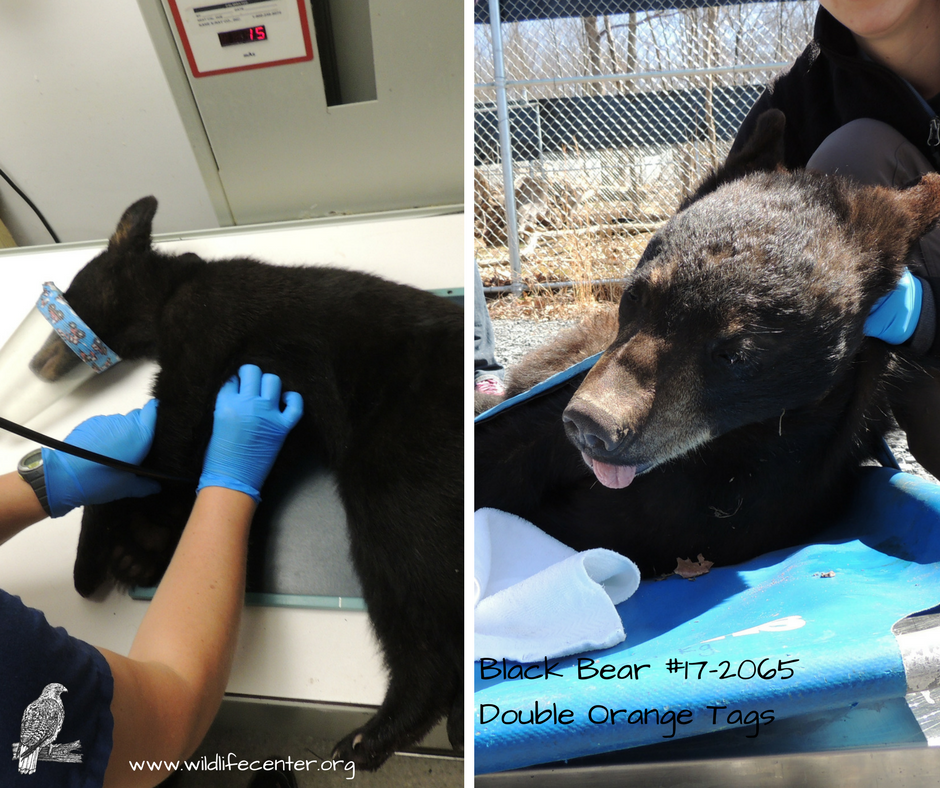 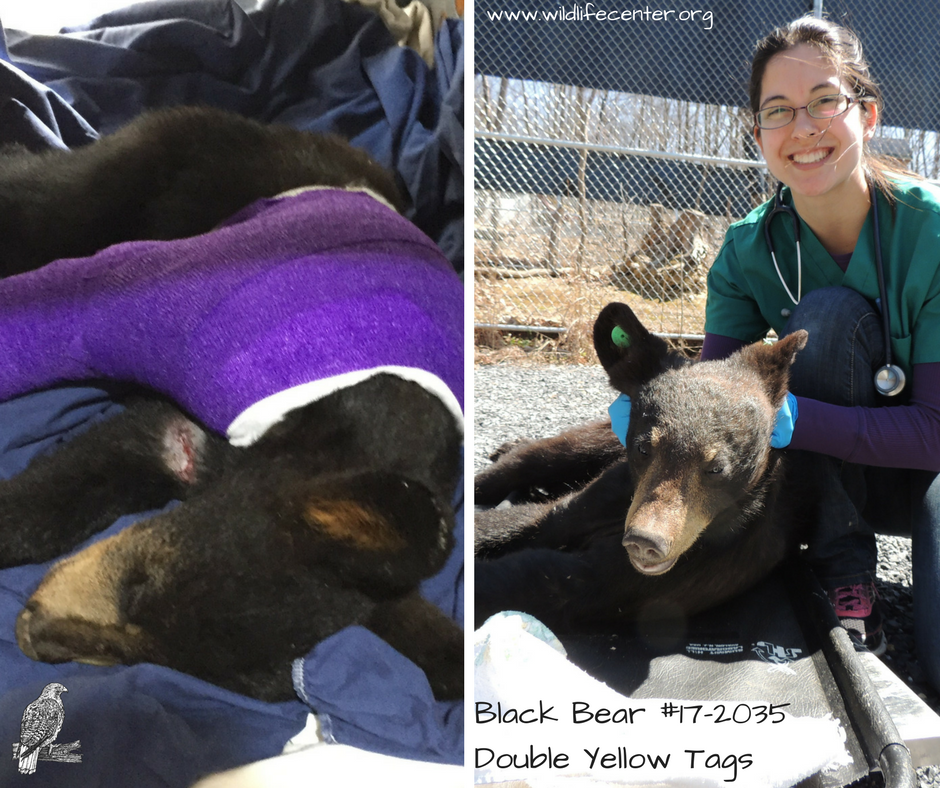 All three Black Bear cubs are doing well at the Wildlife Center. The two male cubs are well-matched for each other -- they are closer in age and weight, and enjoy playing with one another. At feeding time, the cubs are allowed free range of the room where they are housed, and they have time to romp and play after eating. The female cub has gained enough weight to graduate to three times a day feedings.

Here are two videos of the cub -- the first video is of the female and first male cub (before the third cub arrived).

This video of the two male cubs playing; the newest cub is identified by the green paint on his ears. Soon, they'll receive identification tags.