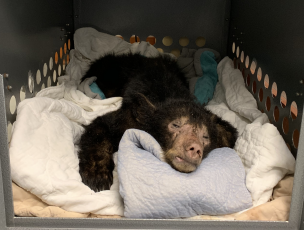 On April 8, DGIF responded to several concerned calls about a Black Bear yearling in a townhouse complex in Albemarle County; although some residents were simply concerned about the bear's general presence in the neighborhood, others were worried that the bear was hurt or sick, because of visible hair loss and a possible limp. A DGIF biologist was able to tranquilize the bear and transport it to the Wildlife Center for assessment and care.

On presentation, Black Bear #19-0328 was quiet but alert and responsive. The male bear was very thin and poorly conditioned, weighing only 10 kg. A physical examination revealed severe alopecia [hair loss] on the bear's face, crusty skin on his body (most notably on his flanks), and matted hair along his abdomen. These are all symptoms of mange in Black Bears, so a skin scrape was performed; the test confirmed that the bear was suffering from sarcoptic mange. 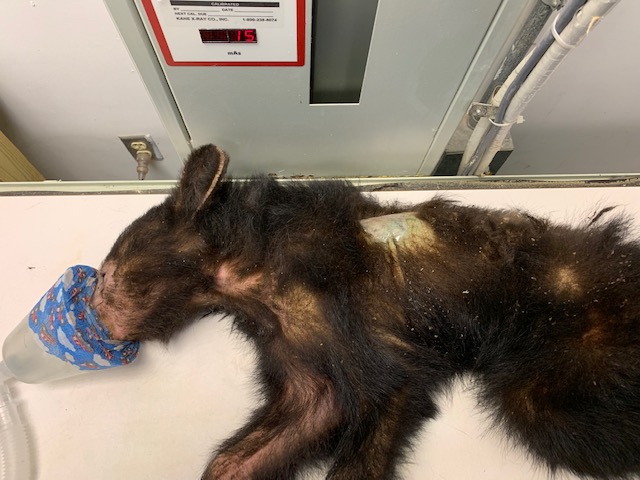 The patient was anesthetized for radiographs, which revealed a severe pneumothorax -- a condition where there is air in the thorax [chest] outside of the lungs. This results in difficulty expanding the lungs to breathe. The remainder of the radiographs were within normal limits for a thin yearling bear. A thoracocentesis was performed to resolve the pneumothorax; this is a procedure where a small needle is placed into the chest cavity, and the free air is suctioned off. When clipping the hair for the procedure, a tiny puncture wound was noted on the left side of the bear’s chest, which is thought to be the source of the free air in the thorax. There was a very small piece of metal removed from the puncture – a jagged piece of fence or wire – and it's possible that this punctured the bear’s chest wall. After the free air was removed, the small puncture was sealed with a bandage to prevent further air from freely entering the thorax.

Initial blood work showed the bear was mildly anemic. The bear was given fluids and set up in the Center’s isolation room, where he will likely remain until all the yearlings currently housed in the Large Mammal complex have been released. Although the bear did not display significant respiratory distress during the initial examination, the veterinary team will monitor his respiratory rate and effort for several days due to the pneumothorax.

The bear will be given an anti-parasitic medication to treat the sarcoptic mange, and, as long as he doesn’t need antibiotics for other underlying issues, he’ll likely participate in a mange treatment study coordinated by the Center’s veterinary fellow Dr. Peach.

Due to severe mange and a pneumothorax, the prognosis for Black Bear #19-0328 is guarded.

Your donation will help support this Black Bear  ... and the other 3,000 patients the Center is treating this year. Thank you!

Black Bear yearlings #18-2926 and #19-0328 were successfully released together on Friday, May 24. DGIF biologist Jaime Sajecki reported that both ran off quickly, and took a quick dip in a nearby pond at the release site.

A big thank you to Jaime for the photo and video!

On May 21, Black Bear yearling #19-0328 was darted and anesthetized for a follow-up skin scraping and physical exam. Dr. Peach was pleased to find no mites on the bear, and no thickened or crusting skin. The yearling’s hair is growing back and is improving greatly.

Though the yearling still doesn’t look completely normal, there are currently abundant food sources and springtime temperatures are warm enough that the bear should have no problems in the wild. The sunlight and open air will be beneficial for the bear, and the yearling’s fur should be back to normal within the next month. 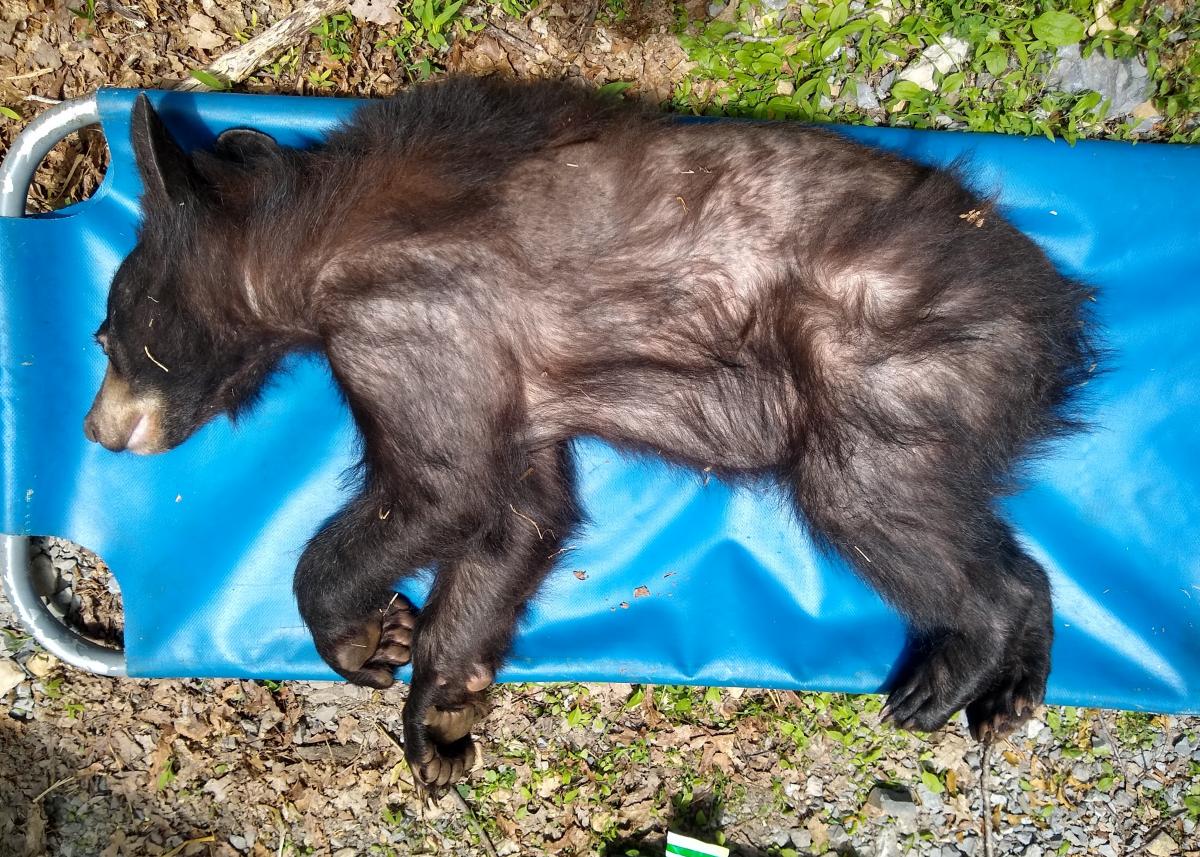 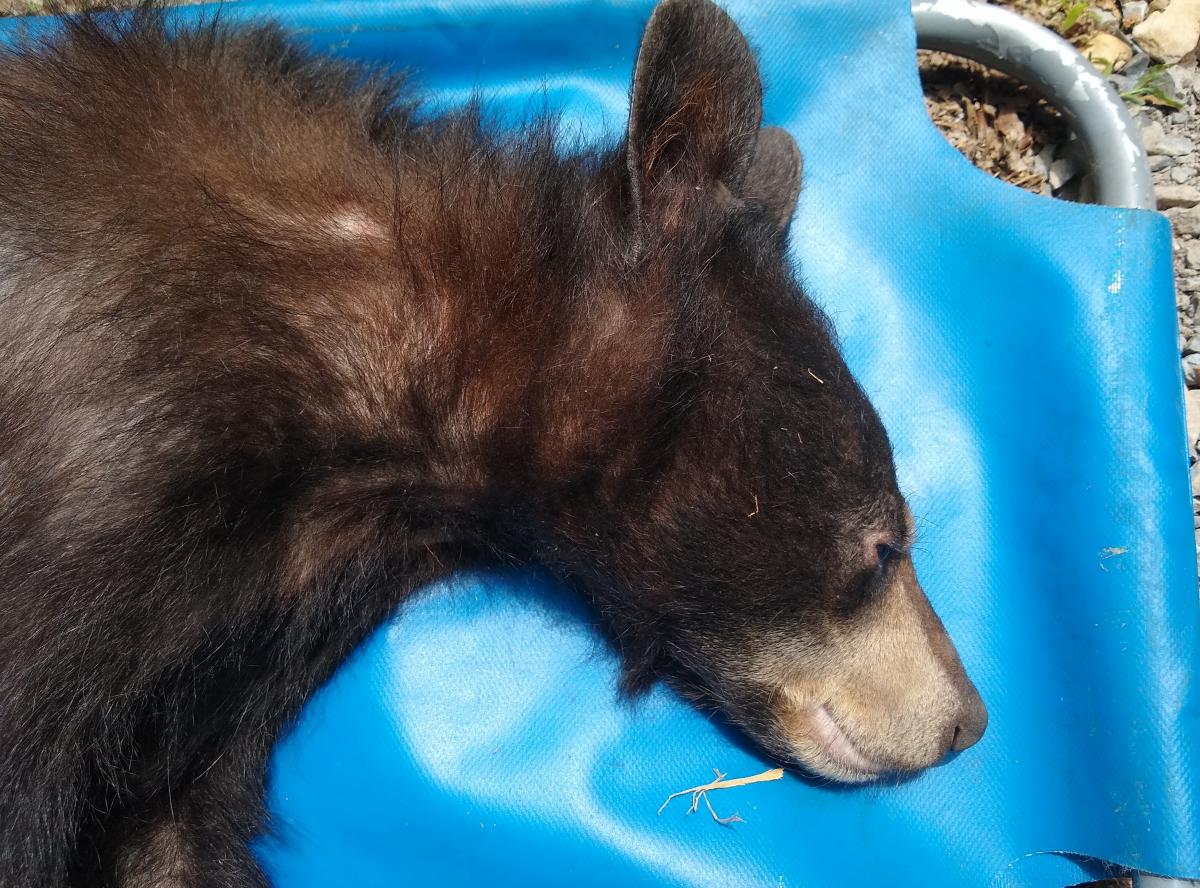 The staff reached out to Regional Wildlife Manager Jaime Sajecki to coordinate release; a DGIF biologist will pick up the Black Bear yearling for release on Friday, May 24.

Black Bear yearling #19-0328 was anesthetized on April 23 for a physical exam, repeat skin scrapes, and blood collection.  Dr. Peach, the Center’s veterinary research fellow, collected the samples in the Center’s isolation room, then transported the bear to Bear Pen 1.  The skin scrapes revealed seven dead Sarcoptes spp mites, so he’ll still be treated as “contagious”, but won’t be treated with any additional medications at this point. The bear has gained 3.9 kg since admission; while the bear's hair coat is still very poor, the scabs on the bear's skin are coming off. 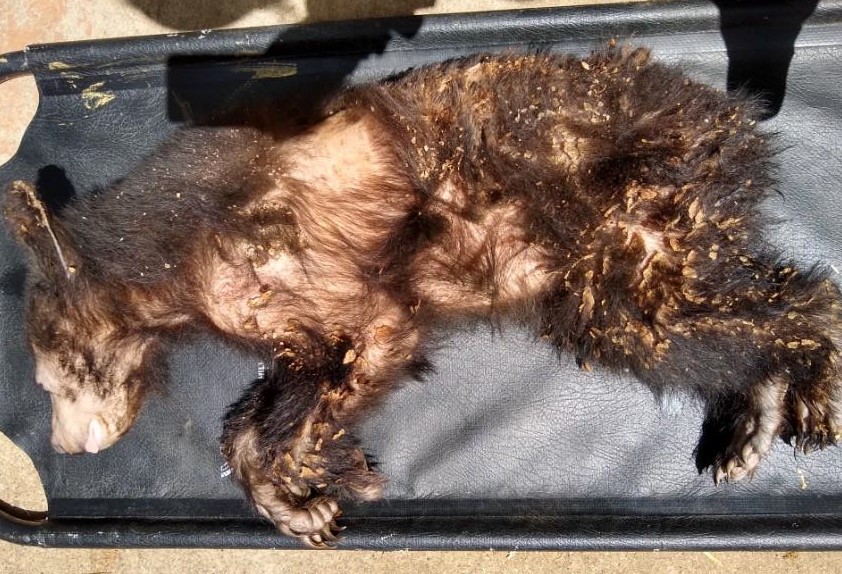 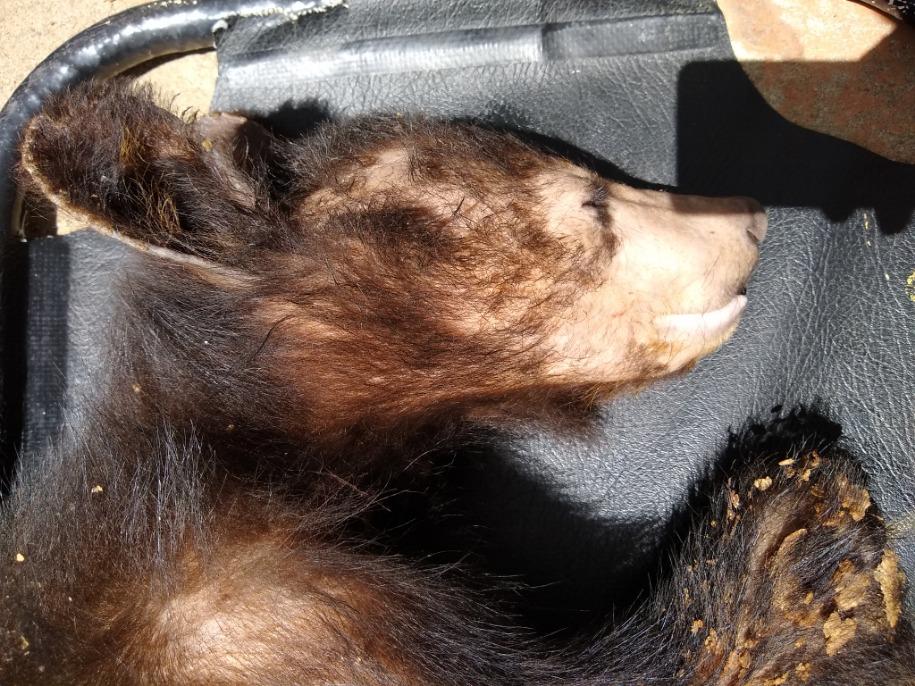 The next exam and round of samples will be taken four weeks from today. Since the bear has been doing well and didn’t need any additional treatment after his initial care, he remains in Dr. Peach’s bear mange treatment study.

Black Bear yearling #19-0328 has been doing well during the past week; every day, the vet staff monitor the bear’s respiratory efforts, and it appears as though the bear is breathing normally. The yearling is eating most, if not all, of his food every day.

On April 23, the veterinary team will perform a skin scraping to re-check the presence of mange mites; this will be two weeks after the bear’s treatment started. In the next week, the staff will move the bear from the Center’s isolation room to the Bear Pen, after Black Bear #18-2926 moves to the Large Mammal Isolation enclosure.