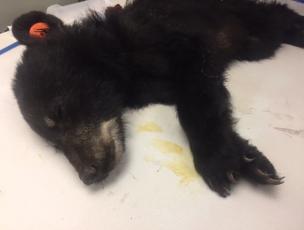 On November 7, a male Black Bear cub was admitted to the Center from Botetourt County. The cub reportedly wandered into a Kangaroo Mart store and was trapped in a storage room. Employees called Animal Control; an officer was able to capture the cub and then called the Department of Game and Inland Fisheries. A biologist responded to the scene and transported the cub to the Wildlife Center.

Dr. Peach, the Center’s veterinary fellow, examined the cub when he arrived. The bear was anesthetized for a full physical exam; Dr. Peach found that the tiny cub was thin and dehydrated, with minor abrasions on his lower gums and cracked foot pads. He weighed 4.6 kg. No fractures were noted. Skin scrapings revealed both live and dead ursacoptes and sarcroptes mange mites. An anti-parasitic medication was given, along with fluids. Dr. Peach placed an orange identification tag in one year, and a yellow tag in the other ear.

The bear was placed in a zinger crate in the Center’s holding room for the night and moved to the Center's Bear Pens on November 9. The cub is contagious due to the mange mites; the bear will be anesthetized in two weeks for a follow-up skin scrape and second dose of medication.

Your donation will help support this tiny Black Bear cub ... and the other 3,000 patients the Center is treating this year. Thank you!

The bears were examined, ear tagged for release, and weighed. 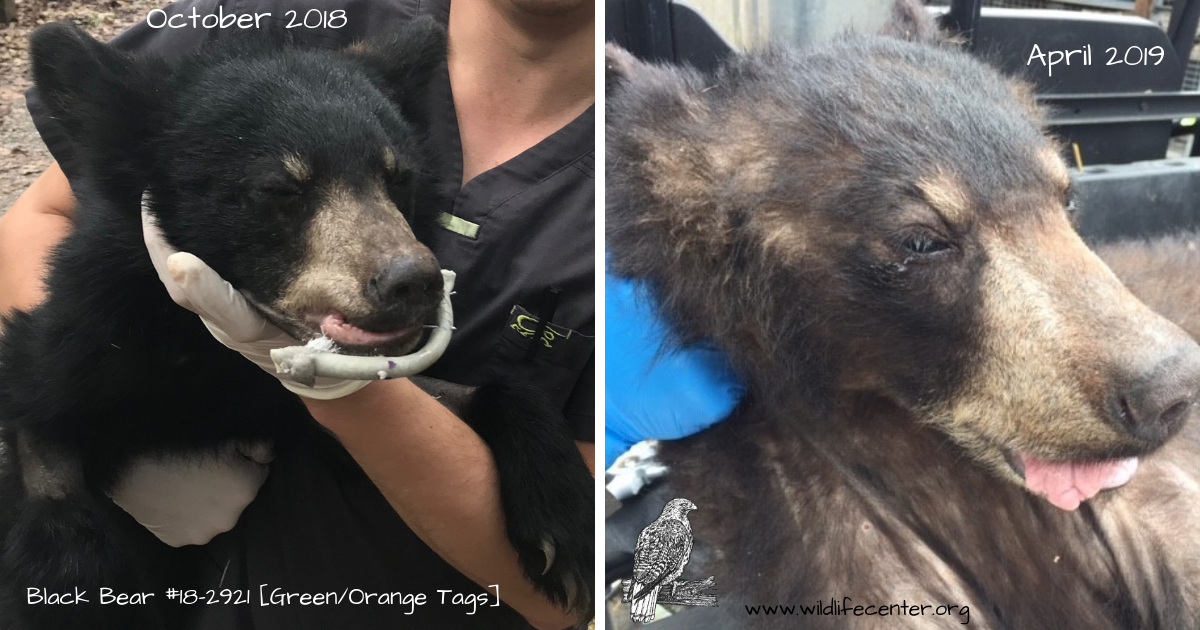 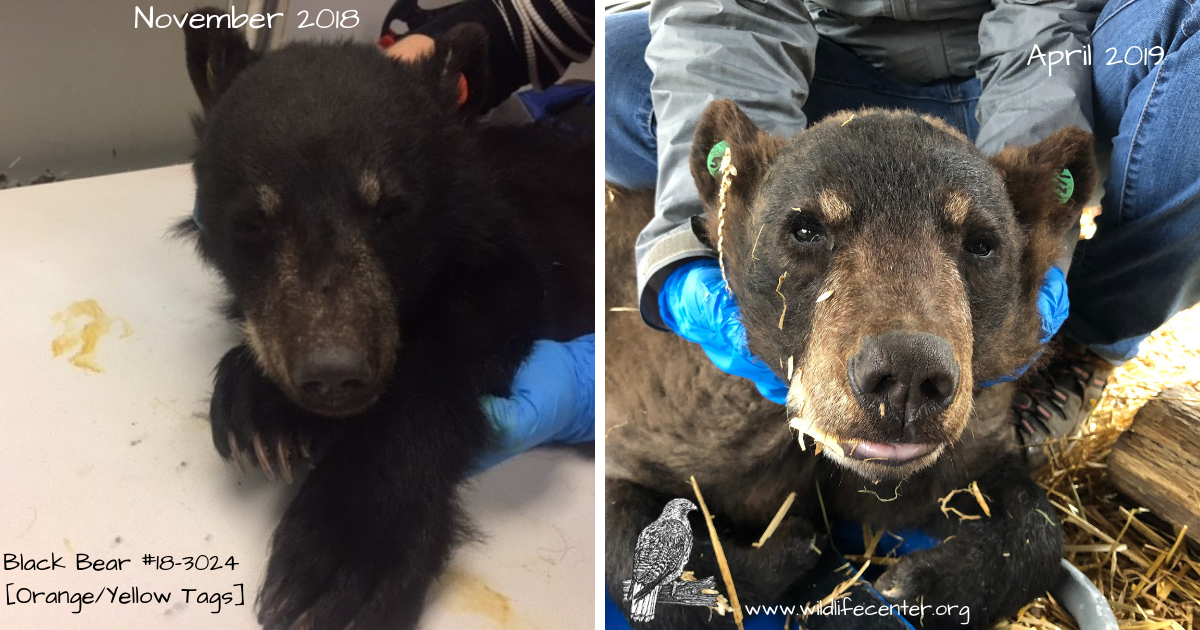 Jaime Sajecki went along on the release with another DGIF biologist and took these release photos:

On Thursday, Dr. Ernesto did a full work-up on bear #18-2926, who was admitted in October 2018 with a broken elbow. While the bear’s fractured leg was surgically repaired last fall,  the team knew that this would be a very difficult fracture to overcome, particularly in a young, growing bear. The yearling has been in the Bear Complex since early January, and the rehabilitation team has been monitoring the bear carefully; the bear has had no issues climbing trees, though the team has noted that the bear doesn’t walk completely normally.

Radiographs confirmed that the fracture site is stable; Dr. Ernesto was pleased with how this appeared and decided that the bear could be released without additional concern. However, the yearling bear also had a wound on her face; upon closer examination, Dr. Ernesto realized that the wound was caused by a tooth root abscess. The bear’s tooth will need to be extracted before release; the bear was placed in the Center’s Bear Pen while options are being considered.

Bear releases are quickly approaching! All of the bear yearlings at the Wildlife Center are nearing their release time -- even the bears that were admitted within the past few months as undersized sick, injured yearlings. Not only are the bears old enough to be on their own at this point, but spring is also a good release time, due to the abundance of wild foods.

The six yearlings in yard #1 are all doing well. Each of these bears arrived this past fall or winter; many were underweight, and some tested positive for mange mites. At this point, they are all in good body condition and each has resolved its initial injuries or issues; while these bears aren’t as large as the bears in yard #3 [who have been at the Center since spring 2018], the yard #1 yearlings are healthy and ready to be returned to the wild. 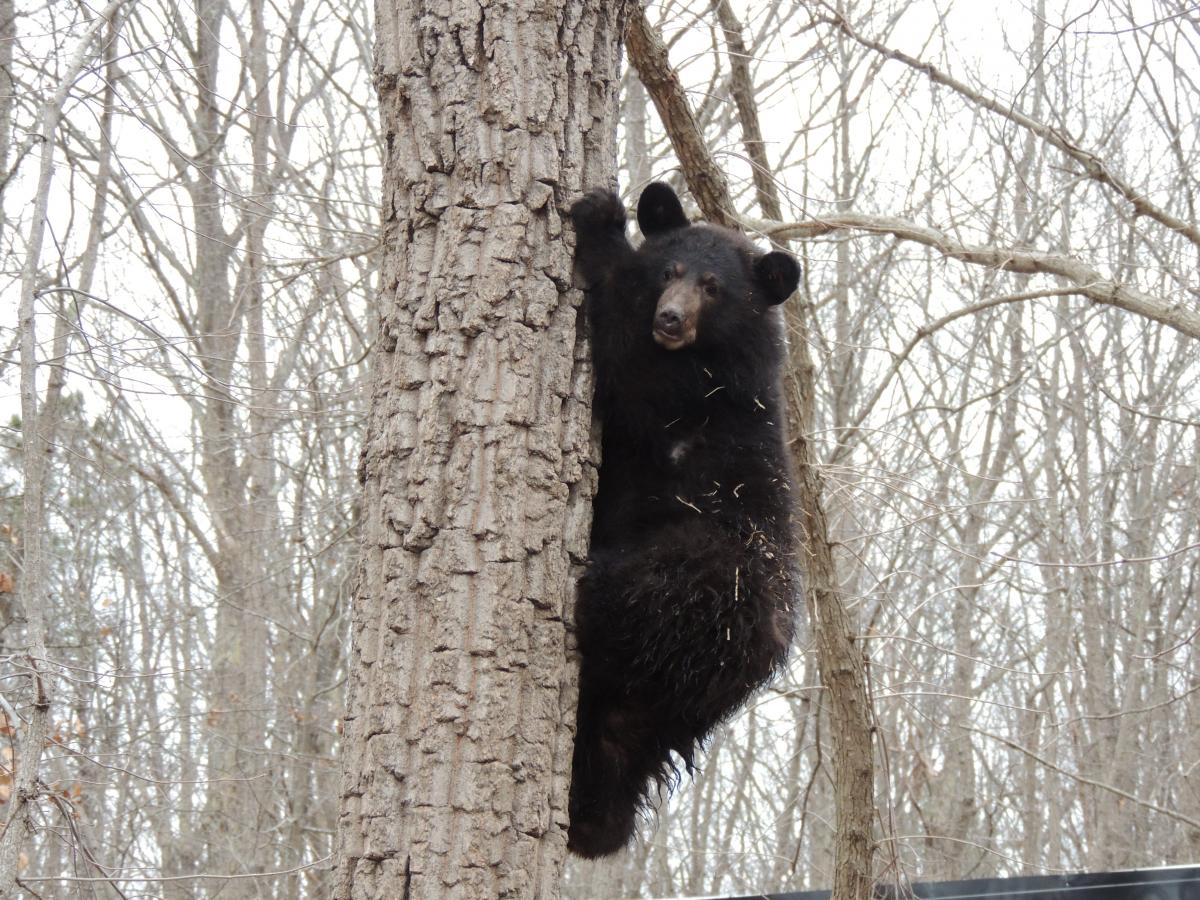 Since these bears are generally more wary of people, and several enjoy spending their days in trees, the rehabilitation staff will set live traps in yard #1 in hopes of catching some of these bears early in preparation for release. Once trapped, the bears will be moved to the Large Mammal Isolation enclosure, where they can be more easily and safely darted and anesthetized on their release days next week. Trapping will start Wednesday; the Critter Cam for this yard will cease streaming at that time.

Black Bear cub #18-3024 [Orange/Yellow Tags] was darted and anesthetized on January 3 for a follow-up examination and weight. The rehabilitation staff requires that all cubs weigh in at 10 kg or more to be able to move to the yard, and they were unsure if the bear had yet gained enough weight.

The team also wanted to radiograph the bear; while it appears as though the cub had gained some weight since admission, the bear has not been growing as quickly as expected. The cub still appears fairly small and even stunted; the bear also has a very round stomach, though fecal examinations have been negative for worms and other parasites.

The veterinary team found that the bear’s bones appear to be developing normally, though some of the internal organs appeared slightly abnormal. It may be that this bear has some congenital issues that are causing it to grow more slowly. But, since the bear is alert and has been growing [weighing in at 13.9 kg], the team decided to move the bear to the Bear Complex for further observation. The cub was moved to the main area of yard #1 with roommate Red/White Tags. 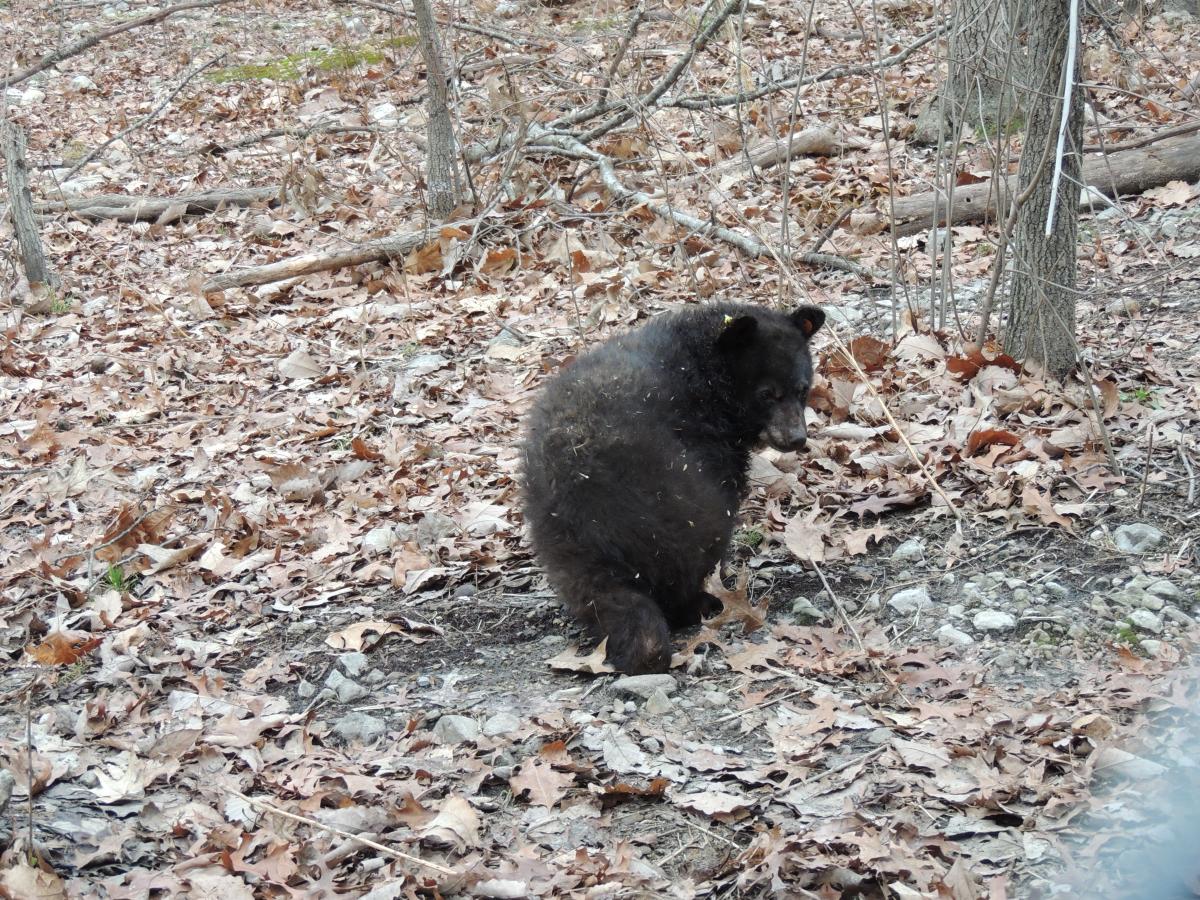 The two bears on the other side of the Large Mammal Isolation enclosure – Pink/Orange Tags and Green/Orange Tags – were also moved to the Bear Complex today. Those bears are currently in the transition area of yard #1; the connecting door will likely be opened on January 4, giving the four bears access to all of yard #1.

On November 15, a severe ice storm hit Waynesboro, causing power outages and multiple downed trees and limbs.  A large tree limb fell on the roof of the bear pens, damaging the roof. The following day, the staff moved Black Bear cub #18-3024 [Orange/Yellow Tag] to a zinger crate in the Center’s isolation room; the staff did not want to introduce the bear to any other bears until the cub had another skin scraping to check for mange mites.

On November 21, the bear was anesthetized and additional skin scrapings were taken. The technician staff found three dead mites; the staff decided to go ahead and put Orange/Yellow Tag with Red/White Tag, the other bear that was treated for mange this fall. Orange/Yellow weighed in at 6.12 kg.

The two bears are currently housed in the Center’s Large Mammal enclosure. The rehabilitation staff report that the two bears have often been observed snuggling together. Once both of the bears are more than 10 kg, they'll be moved to the Center's Bear Complex.