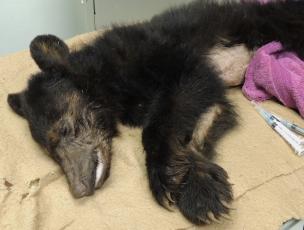 On April 14, the Wildlife Center admitted another yearling Black Bear – the 11th bear admitted in 2014. The male yearling was seen hanging around a house in Greene County, Virginia; the bear appeared to be quite thin and very lethargic. A biologist with the Department of Game and Inland Fisheries responded to the scene, tranquilized the bear, and transported him to the Wildlife Center.

Upon admission, Dr. Rich examined the yearling. Dr. Rich found the bear to be severely emaciated. Blood work also confirmed that the bear was anemic. The bear had alopecia [hair loss] on his 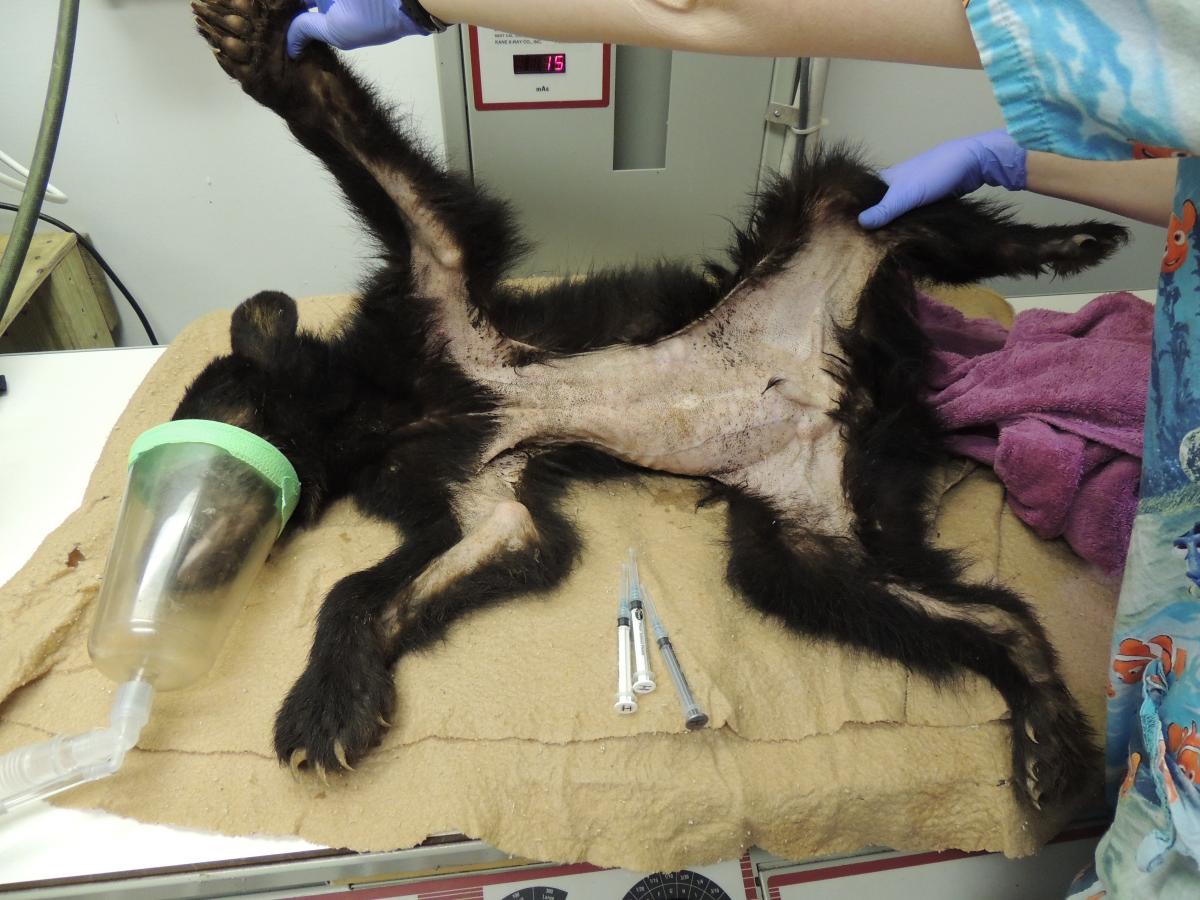 stomach and chest; a skin scraping of the hairless areas revealed no parasites, suggesting that the alopecia is from poor nutrition. No injuries were noted on the bear’s radiographs. The bear weighed 7.74 kg.

The veterinary team gave the bear fluids, a vitamin injection, and an anti-parasitic medication before it was placed in the Center’s holding room for the night. The team will begin to offer the bear very small, highly digestible meals multiple times a day. The bear’s condition is guarded due to its emaciated condition and risk for re-feeding syndrome.

Your special donation will help the Center to provide state-of-the-art medical care to this Black Bear … and to the 2,600 other patients the Center will admit this year. Please help!

The veterinary team headed to the Black Bear Complex to dart the yearlings at about 9:15 a.m. Bears #14-0657 and #14-0301 were darted in trees; #14-0657 climbed down quickly after she was darted.    Bear #14-0301 proved to be more stubborn; the bear began to feel the effects of sedation while still in the tree, so Dr. Dave, Dr. Rich, and the VDGIF biologist stood at the base of the tree holding a sturdy blanket to catch the bear in case he fell. The bear slowly climbed down on his own. The bears were examined, weighed, and loaded into the DGIF transport trap.

Bear #14-0364 was also darted while in the crotch of a tree. Unlike the other two yearlings, this bear did not climb down the tree after he was darted. Anesthesia quickly took effect in this bear; the “catch team” was unable to get to the base of the tree in time. The bear fell approximately 30 feet from the tree.

The team carefully examined the bear once it was fully anesthetized and noted some abnormalities with the bear’s jaw. Bear #14-0364 was brought into the hospital for a thorough exam and radiographs to determine if the bear’s jaw was fractured during the fall. No obvious fractures were noted on radiographs, though it can be difficult to appreciate injuries in the skull region due to the density and overlap of numerous bones.

The veterinary staff was unable to close the bear’s mouth, which could indicate that there is a dislocation in the jaw that was not identified on radiographs. The bear was placed in the Center’s Large Mammal isolation facility. A camera was placed in the enclosure so staff can monitor the bear during the next few days.

Once it became clear that bear #14-0364 would not be released today, The Center’s new veterinary fellow, Dr. Helen Ingraham, successfully darted female bear #14-0142 without incident.

The three bears will be released in the western half of Virginia. 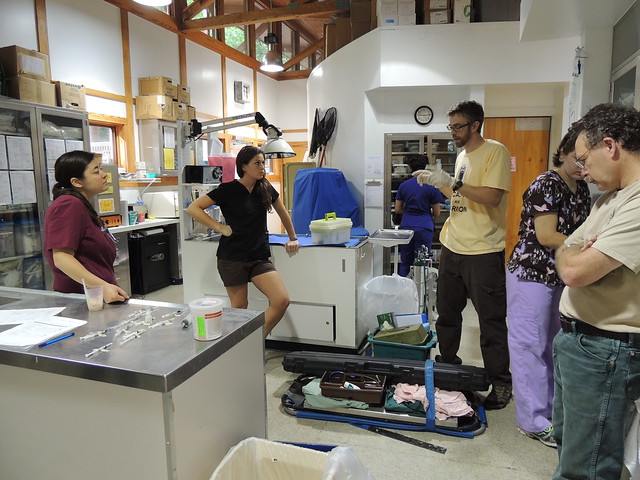 The four Black Bear yearlings #14-0142, 301, 364, and 657 – have been doing well this spring at the Wildlife Center. The bears can often be seen via Critter Cam lounging in trees. The bears have visibly put on weight, and are in good condition.

Now that food is very plentiful and the berries are out, it’s time to release these four yearling bears. A biologist with the Department of Game and Inland Fisheries will pick up and release the bears on Tuesday, July 15.

Both bears were placed in yard #2 of the Black Bear complex, along with female yearling #14-0142.

Black Bears #14-0301 and 14-0364 have been doing well in the Center’s Large Mammal Isolation enclosure. The two yearlings seem to be getting along just fine, and both are eating well. On April 30, Dr. Rich checked on them to assess their appearance; he felt that both were improving and are in better body condition. During the week of May 5, the two bears will be darted, anesthetized, weighed, and moved to Black Bear Complex yard #2.

Black Bear #14-0301 has been doing well as he recovers from his emaciated condition. The bear is eating well and gaining weight, and his attitude is consistently bright and feisty. At this point, the risk for re-feeding syndrome should be over. The veterinary team moved the bear to the outdoor Large Mammal Isolation facility on April 21.

Black Bear yearling #14-0301 is recovering well so far from his emaciated condition. The bear is eating well, and the staff are slowly increasing the size of the bear’s meals. At this point, the bear is still receiving a specialized diet for thin/emaciated animals. The bear’s hydration level is improving, although the veterinary team is still giving subcutaneous fluids each day.