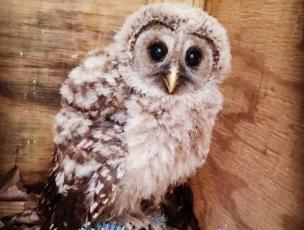 On May 13, the owlet was admitted to the Center as patient #14-0668. The bird was bright and feisty, well-hydrated, and showed no signs of injury from falling out of its nesting tree. The owl made appropriate warning noises with its beak [a clacking noise] when the veterinary staff approached the bird’s cage.

The Wildlife Center is caring for an adult Barred Owl [patient #13-0004] that can serve as a surrogate for the young owl. On May 13, owlet #14-0668 was placed in a crate in an outdoor enclosure with the adult Barred Owl, allowing both birds to see and become comfortable with each other.

By May 14, the owlet’s crate door was opened so the two birds could interact. The owlet was observed perching on the low perches placed on the floor of the enclosure.

So far, interactions between the owlet and the adult have been appropriate. The owlet is still mostly fluffy with only a few of its adult flight feathers grown in. Once the owl has more feather coverage, the two owls will be moved to a larger flight pen.

Barred Owl #14-0668 passed five nights of live prey training – proving that it could successfully hunt its own food. The young owl has been flying beautifully, and silently, for several weeks. On Thursday, October 2, the owl was caught up for pre-release blood work and banding. Blood work came back within normal limits, and the owl was approved for release.

On Friday, October 3, the owl was transported back to Southwest Virginia Wildlife Center, who initially cared for the young owl after it was found in May. SVWC will release the bird near its original location. 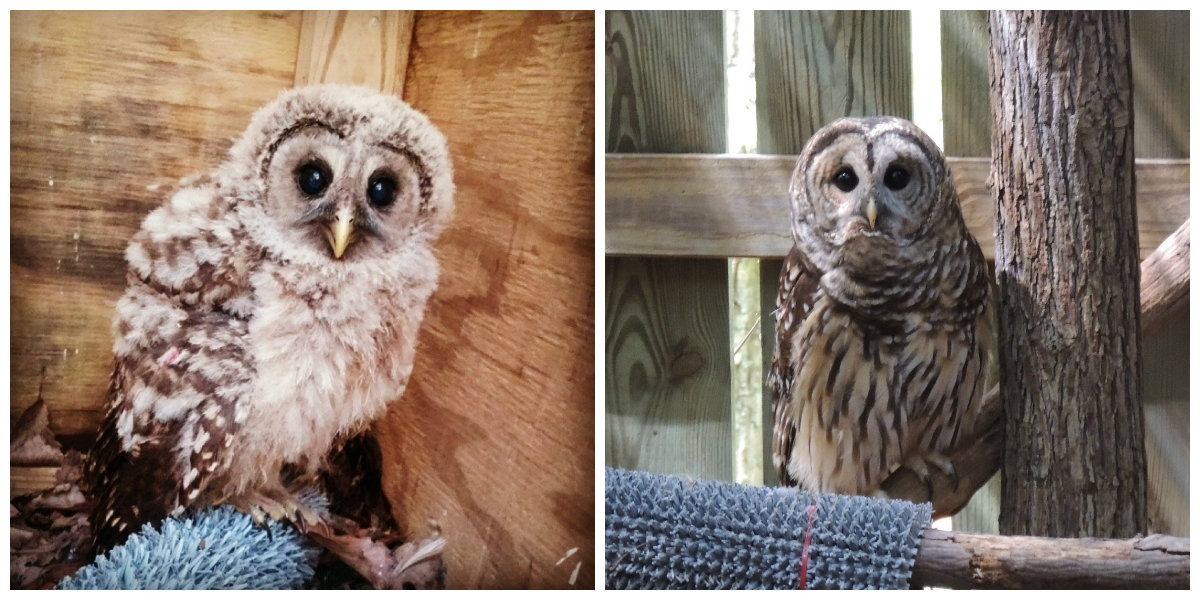 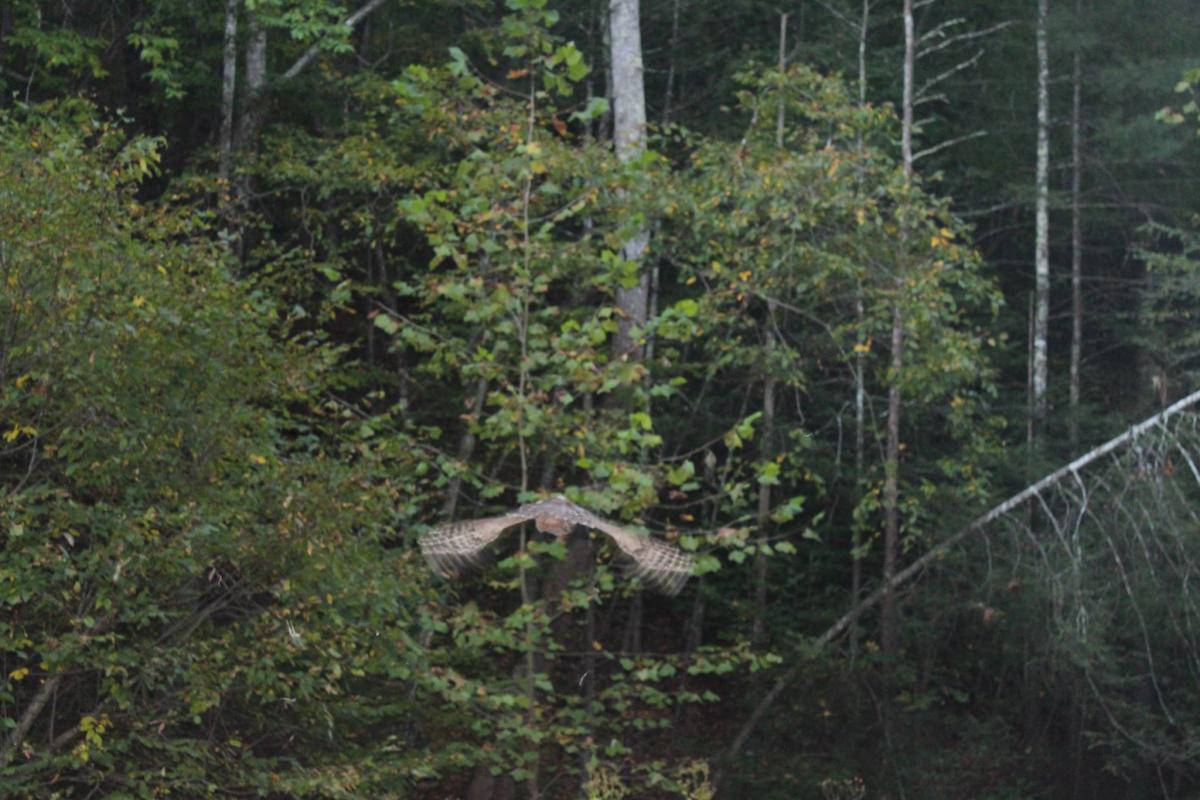 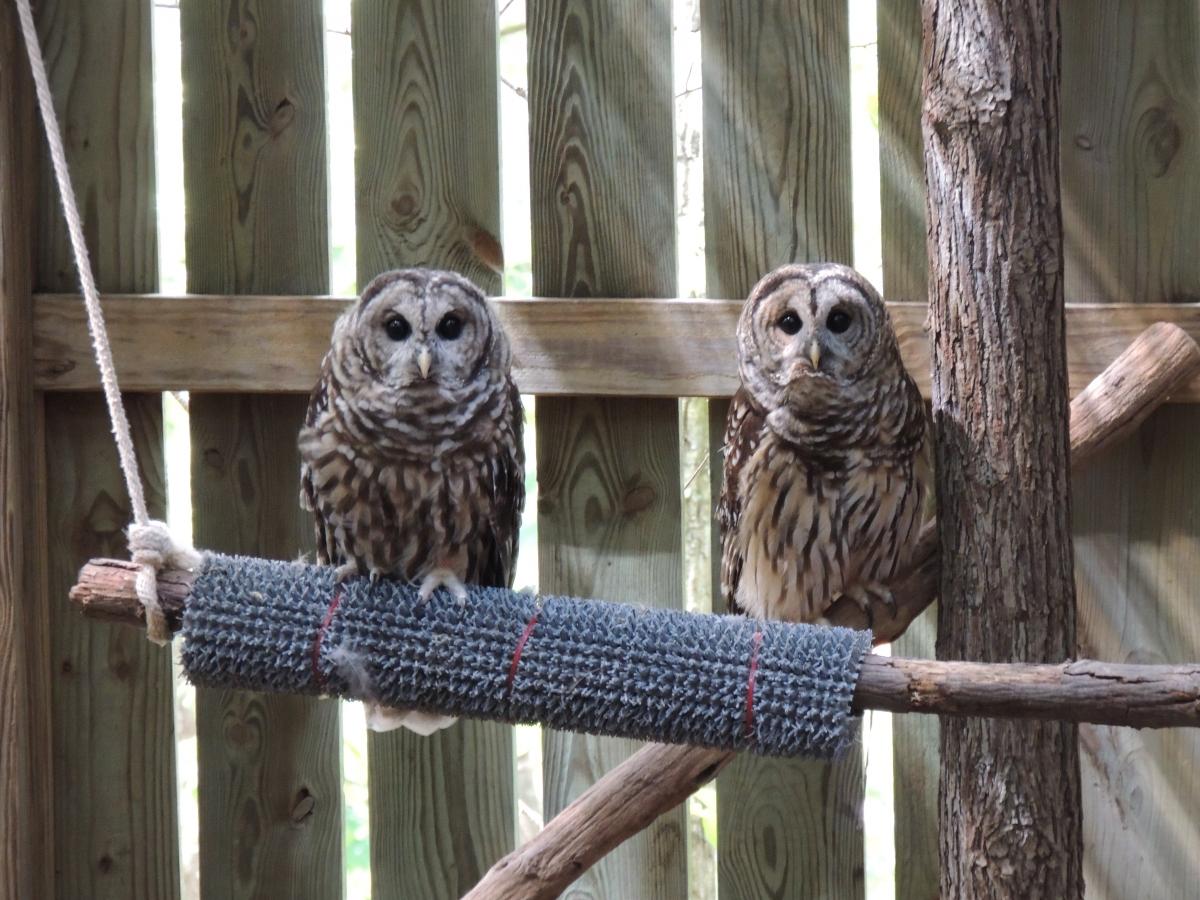 Barred Owlets #14-0668 and 14-1179 have been eating well and growing at the Center during the summer. Both owls are looking much more like adults – at times, it can be hard to distinguish between them and their surrogate Barred Owl mother.

During the summer, wildlife rehabilitation intern Jordan noted that Barred Owl #14-1179 was occasionally making feeding noises toward humans. It was inconsistent, but once the surrogate adult was moved out of the enclosure on September 11, the owlet made more feeding calls, and also became aggressive toward people during daily exercise sessions. The owlet was moved to a C-pen enclosure and was re-introduced to the adult Barred Owl surrogate; while staff are concerned about the owlet’s behavior, it may need additional time with an adult. 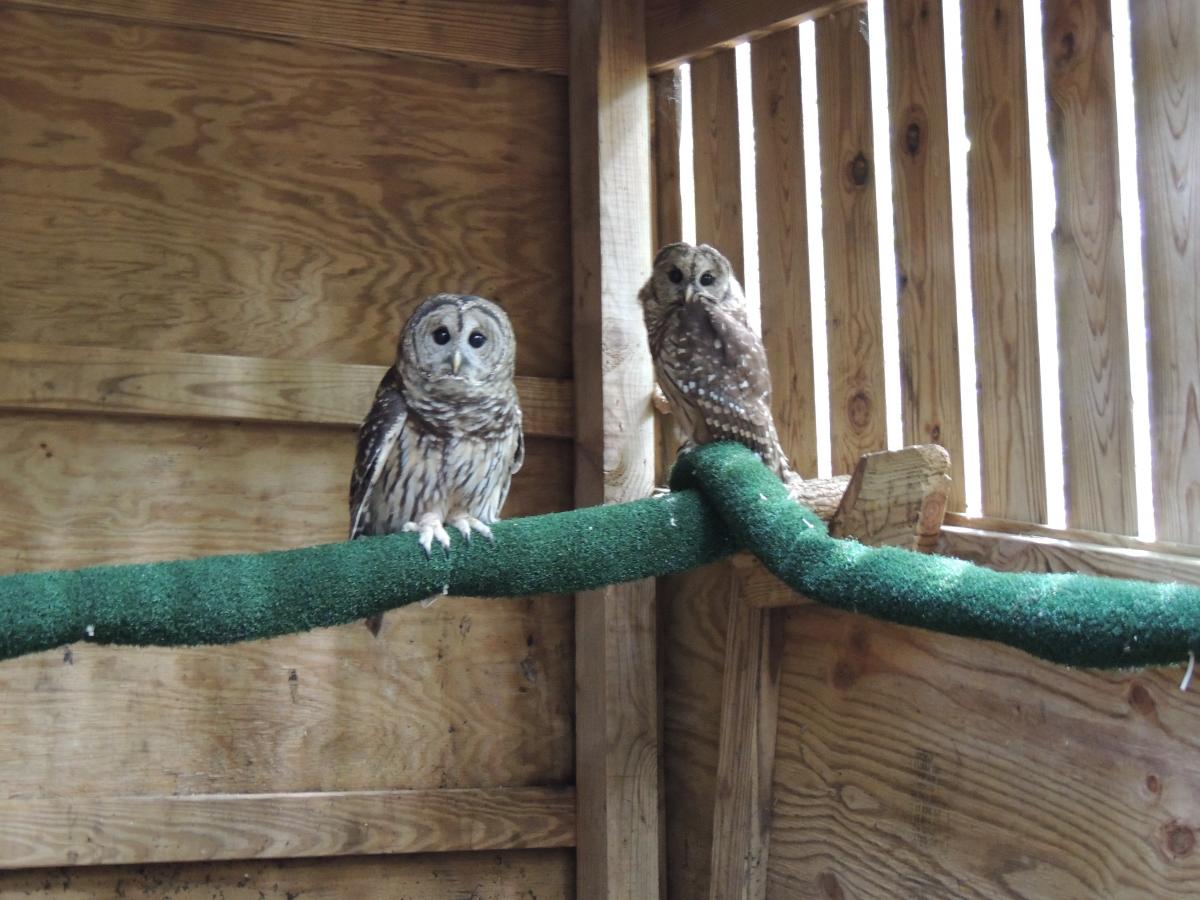 Barred Owlet #14-0668 remains in Flight Pen 6 and is exercised every day. The young owl is flying well, and live prey training is scheduled to start on September 25. Once the owl consistently passes “mouse school”, release will be scheduled this fall.

Barred Owlet #14-0668 has been doing well in the Center’s C-pens and has been steadily gaining weight. On May 27, the veterinary staff rechecked the owlet’s bloodwork. An elevated white blood cell count suggested possible inflammation, however no wounds or injuries were found. The veterinary staff is not currently concerned and will recheck the owlet’s bloodwork in one week.

On June 2, certified wildlife rehabilitator Amber Dedrick caught the owl to assess its development. She reported that Barred Owlet #14-0668 was very feisty and displayed all the appropriate behaviors toward humans. The owlet’s feathers are growing in and both Barred Owl #13-0004 and Barred Owlet #14-0668 will be moved to a larger flight pen when one becomes available.