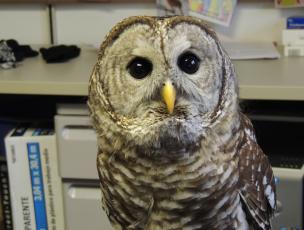 In early September 2012, an adult Barred Owl was picked up in Richmond by an animal control officer. The owl was found down on the ground, weak and uncoordinated, so it was taken to a local veterinarian. Two days later, it was sent to a permitted raptor rehabilitator. The rehabilitator treated the bird and offered supportive care as the bird slowly recovered. By mid-October, the bird was flying well but was still wobbly as it landed on perches. The owl was transferred to the Wildlife Center on October 27 for further assessment.

The Barred Owl was bright and feisty on arrival. The veterinary staff did a complete physical exam and took radiographs on the owl; the only issue they found was that the owl had significant retinal degeneration in both eyes. Based on the initial lack of coordination and eye injuries, Dr. Dana, the Center’s veterinary intern, believes the owl may have contracted West Nile Virus in the summer of 2012. West Nile Virus in raptors generally causes depression, uncoordination, weakness, weight loss, loss of vision, and, in severe cases, seizures, tremors, and death. In this owl’s case, it appears as though the virus caused a permanent partial blindness; Dr. Rich estimates that the owl is about 60% visual. The team deemed the owl non-releasable, and placed it in a flight pen for further observation to assist with determining a placement.

In mid-November, the Wildlife Center outreach department decided to start working with Barred Owl #12-2508 to assess its potential as a Wildlife Center education ambassador. It’s the department protocol to first work with a bird to assess its temperament; not all birds may be ideal candidates as traveling education ambassadors. On November 26, Amanda and Raina fitted the owl with anklets and jesses and began to work with the bird inside.

The initial training process involved bringing the bird out in the office each day, all day, to sit on Amanda’s or Raina’s gloved fist.   The owl quickly adapted to this new lifestyle; in mid-December the owl was moved into an outdoor education enclosure while Amanda and Raina continued training every day.

With training going well, the owl had blood drawn for a gender test in early January, in anticipation of becoming an “official” part of the Wildlife Center team. On January 10, the staff found out:  it’s a girl!  Ideally, the female owl will live with Gus, another female education Barred Owl. Training will continue over the next month, though both Amanda and Raina have high hopes that this owl will be a good fit for the team.

Barred Owl #12-2508 continues to settle in well as an education bird at the Wildlife Center. She is spending her days getting familiar with Gus, her future full-time Barred Owl roommate. The owls are not yet spending the nights together, but are together during the day.

There are only three days left for teachers and classrooms to submit their suggestions for the Barred Owl's new name. The Center will receive submissions through Friday, February 8. Next week, the staff will narrow the list of names down to a final few. The finalists will be put to a public vote -- so check the Wildlife Center's website for more information!  To date, 65 names have been submitted.