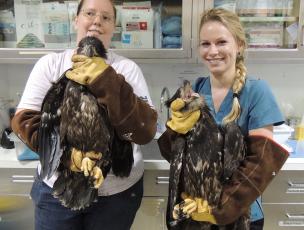 On May 12, two young eaglets were found down on the ground in Chincoteague, Virginia, on the Eastern Shore. A biologist from the Department of Game and Inland Fisheries assessed the situation – the birds’ nest blew down after a storm, and was unable to be restored. The biologist estimated that the two eagles are about two weeks away from fledging. The eaglets were transported to a permitted rehabilitator for the night, and transported to the Wildlife Center by DGIF the following day.

Dr. Rich Sim, the Center’s veterinary fellow, examined the two young eagles after they arrived. No significant injuries were found on physical exam or radiographs, and no significant level of lead was found in their blood analysis. Bald Eagle #14-0649 weighed 4.16 kg; Bald Eaglet #14-0650 weighed 3.7 kg. 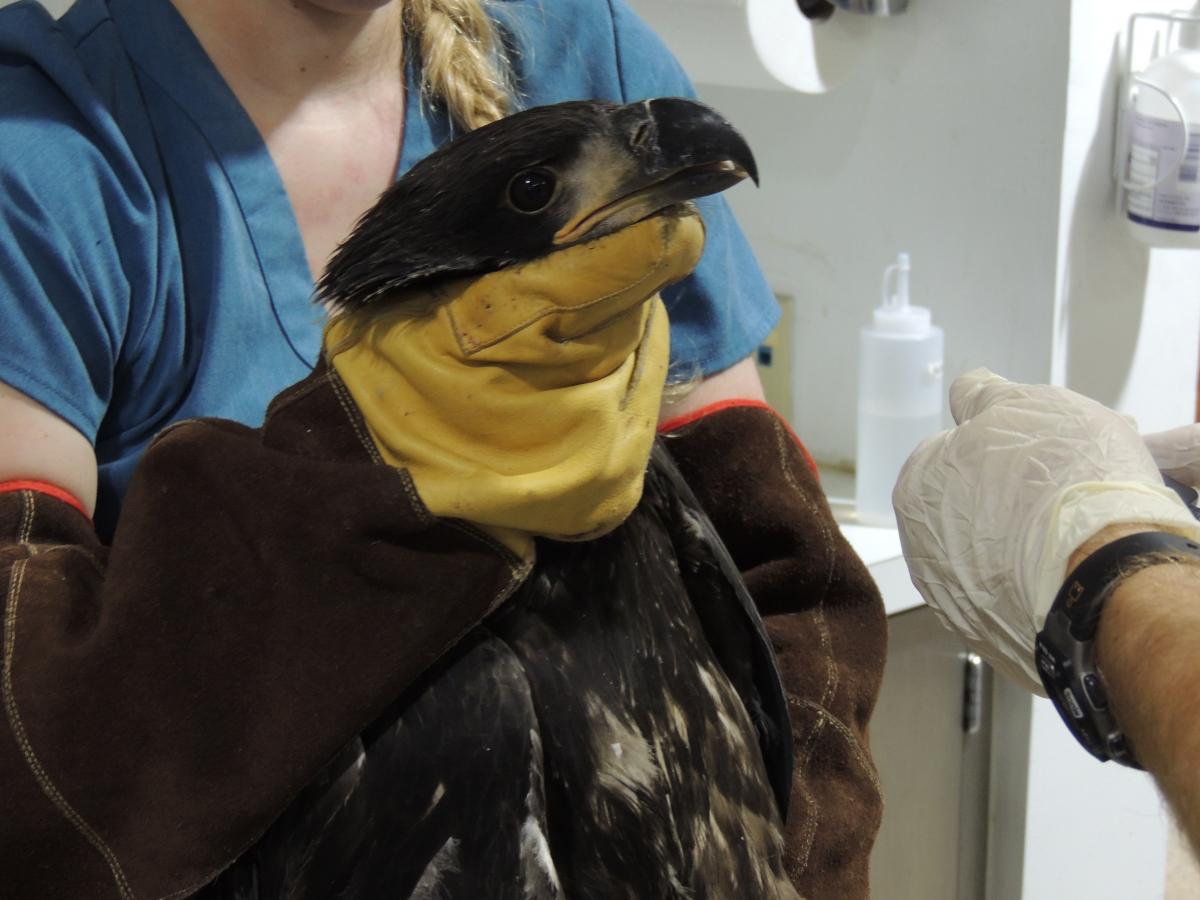 The eaglets were placed in the “tower” portion of the A3 flight pen. In the tower, the young eagles have a nest and several branches, as well as a view into the main flight area of the flight pen. They are able to see Bald Eagle patient #14-0380. As the eaglets grow and begin branching and flapping, the tower doors will be opened so that the two birds can fledge into the main flight area of the enclosure.

The birds will be fed a diet of chopped rats, mice, and fish.

Your special donation will help the Center to provide care to these Bald Eaglets …and to the 2,600 sick, injured, and orphaned wild animals the Center will treat this year.

Bald Eaglets #14-0867, 14-0649, and 14-0650 were successfully released at the Chincoteague National Wildlife refuge on Wednesday, August 20. More than 150 individuals were in attendance, including wildlife rehabilitators Linda Vetter and Gay Franzee and the owners of the campground where Bald Eaglets #14-0649 and #14-0650 were originally found in May.

Bald Eagle #14-0650 was released next. The bird flew in two large, high circles over the release area before it perched in a stand of tall trees.

Bald Eagle #14-0649 was last to be released. Two days before its release, the bird flew into the ceiling of its flight pen during exercise, causing a superficial laceration to its scalp and some loss of feathers. As soon as the bird was released, it circled once high above before it flew into the distance and out of view.

Access to the tracking data from the GPS transmitters that were placed on Bald Eagles #14-0649 and #14-0650 will likely become available on the Wildlife Center’s Eagle Tracking page during the week of August 25. 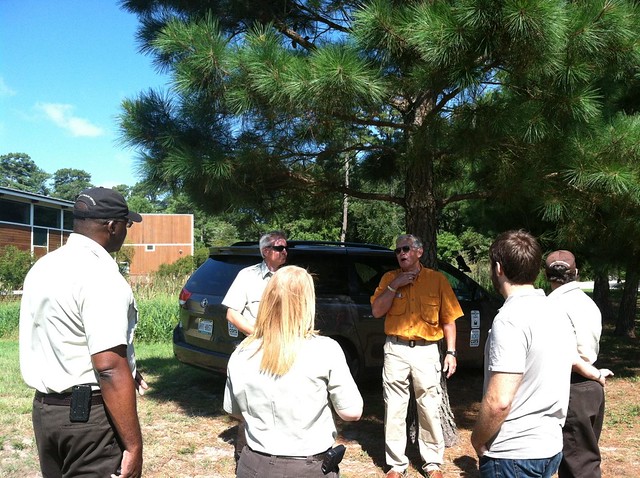 On August 17, Bald Eagle #14-0649 flew into the ceiling of the flight pen during exercise, causing a laceration to its scalp and loss of feathers.

The veterinary team examined the bird in the hospital and performed radiographs to determine if the bird’s accident caused injury beyond the superficial damage to the scalp.

No abnormalities were discovered on radiographs. The veterinarians monitored the bird overnight and returned the eagle to the A-pens on August 18.

Bloodwork performed on the morning of August 19 was normal, and the eagle appears bright and alert. Though visible, the scalp wound does not require continued treatment, and the anticipated release on August 20 will not be affected.

Bald Eaglets #14-0649 and #14-0867 have been flying well during the past few weeks. On August 13, the two birds were assessed for release – and were declared ready to go next week.

Dr. Dave assessed Bald Eaglet #14-0650’s flight in A3, and determined that this eaglet will likely be ready for release next week. The bird has recovered very well from the shoulder injury – and has been flying the length of the A3 enclosure and is able to fly to all the high perches.

The three young birds will be released by Wildlife Center president Ed Clark at the Chincoteague National Wildlife Refuge on Wednesday, August 20 at 11:00 a.m. The release is open to the public; those wishing to attend the release are asked to meet at the Herbert H. Bateman Educational and Administrative Center (visitor center), located at 8231 Beach Road, Chincoteague, VA 23336. Those planning on attending the release should RSVP to lkegley@wildlifecenter.org.

The birds can be seen on the Center's Critter Cams. 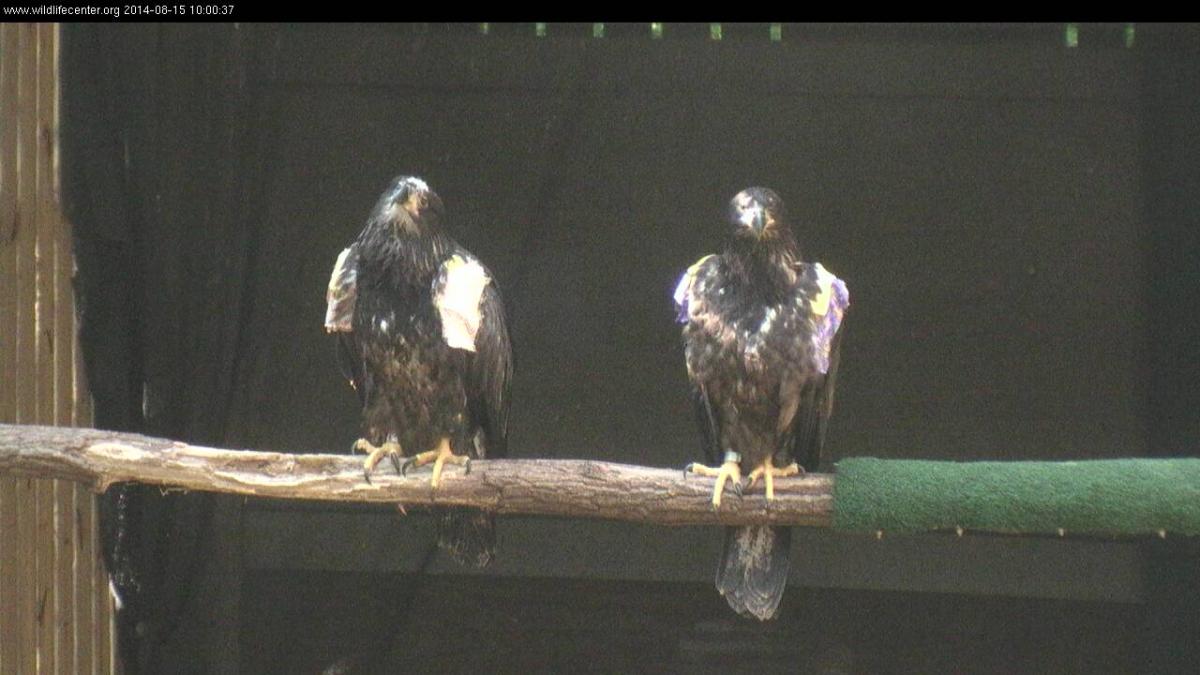 On Monday, August 11, the veterinary team caught up Bald Eaglet #14-0650 from flight pen A3. The eagle had an additional set of radiographs taken to recheck the condition of its injured shoulder. Dr. Helen, the Center’s veterinary fellow, was pleased to see improvements on the radiographs – while the injury is still healing, the shoulder appears to be less inflamed.

The eagle was returned to A3, and the rehabilitation staff opened the curtain partitions in the enclosure to give the eagle access to the entire enclosure. The young eagle quickly flew to a high swinging perch. The team will continue to monitor the eagle’s behavior in the coming weeks.

On Monday, August 4, one of the Center’s rehabilitation externs entered the A3 flight pen to exercise Bald Eagle #14-0650. While flying, the eagle bumped into a wall of the flight pen and fell to the ground. The bird was able to stand, but did not try to fly to a perch.

The eagle was caught up and brought into the Center’s hospital for a physical exam and radiographs. The veterinary team found some boney changes in the eagle’s left shoulder – suggesting that the eagle injured itself about a week ago. While the eagle was still flying during that time, it’s likely that the bump into the wall on Monday aggravated the injury, and it became painful.

The eagle was given an injection of an anti-inflammatory medication and was placed back in flight pen A3 for observation. The rehabilitation staff confined the eagle to one-third of the enclosure with hanging shade cloth. The team will continue to observe the eagle, and additional radiographs are scheduled for August 11.

Bald Eaglets #14-0649 and #14-0867 are flying well in A1. The Wildlife Center staff will be coordinating with USFWS officials at Chincoteague to schedule a release date in mid-August. If #14-0650 is not ready for release in mid-August, a second release will be scheduled later this fall.

On July 22, the rehabilitation staff caught up two Bald Eaglets -- #14-0649 and 0867 – and moved them to flight pen A1. Bald Eaglet #14-0650 remains in flight pen A3. Dividing the three birds up into two flight pens will allow the staff to more safely exercise the large birds in preparation for release.

The eaglets are doing well with their transmitters – all three have had no issues after last week’s fitting. Now that each eaglet has a little more space, a formal exercise program will begin. The eaglets should be released sometime in August; the staff should know more next week.

On July 16, DGIF biologist Jeff Cooper came to the Wildlife Center to band and fit Bald Eaglets #14-0649, 0650, and 0867 with GPS transmitters. Each eaglet was weighed and measured prior to being fitted with a transmitter. The transmitter fitting went smoothly, and the three eaglets were returned to flight pen A3. The Wildlife Center will have access to the transmitter tracking data and will share updates after the eagles’ release.

During the next few weeks, the Wildlife Center staff will begin to prepare the eaglets for release. Depending on flight pen availability, the eaglets will likely be split up so they can be exercised and conditioned safely without running into one another. The staff will work with USFWS to determine when in August the three eaglets will be released in Chincoteague. 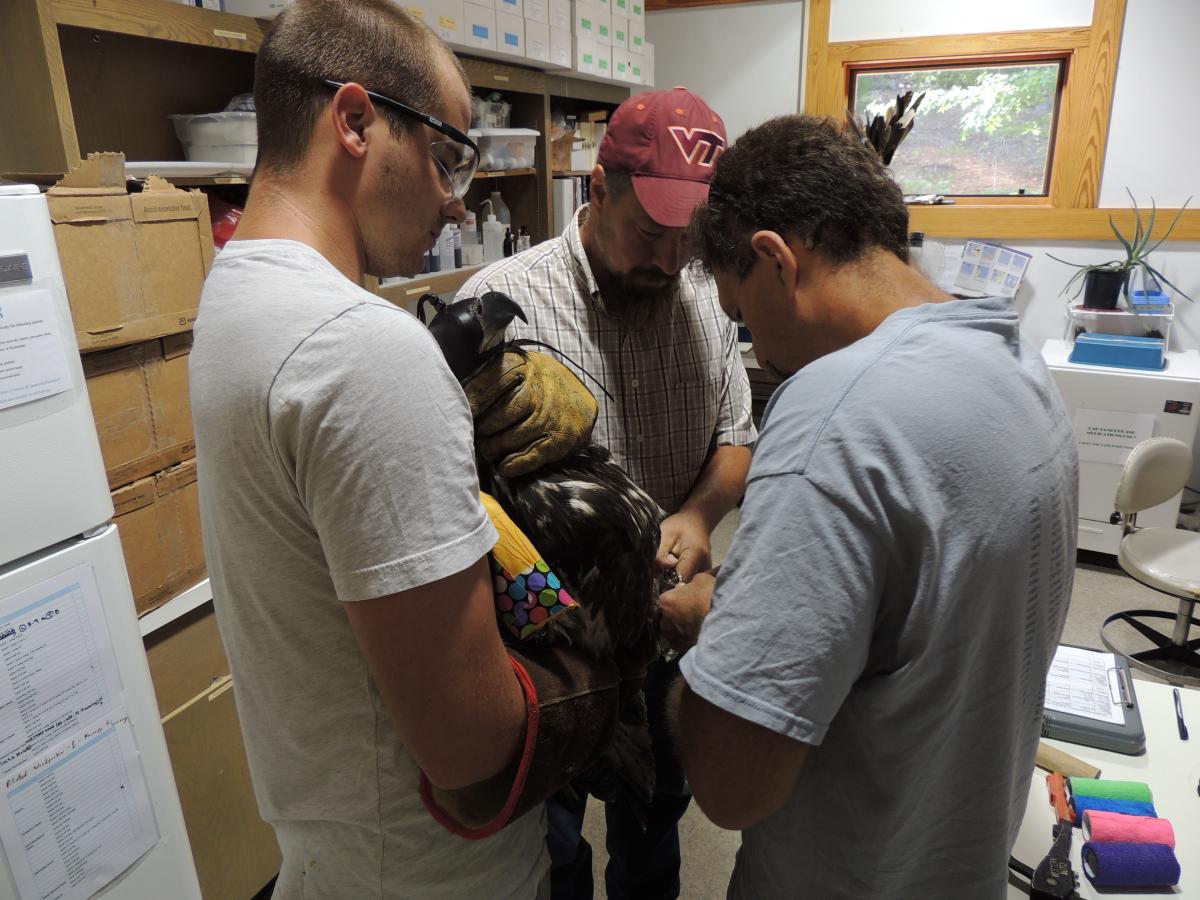 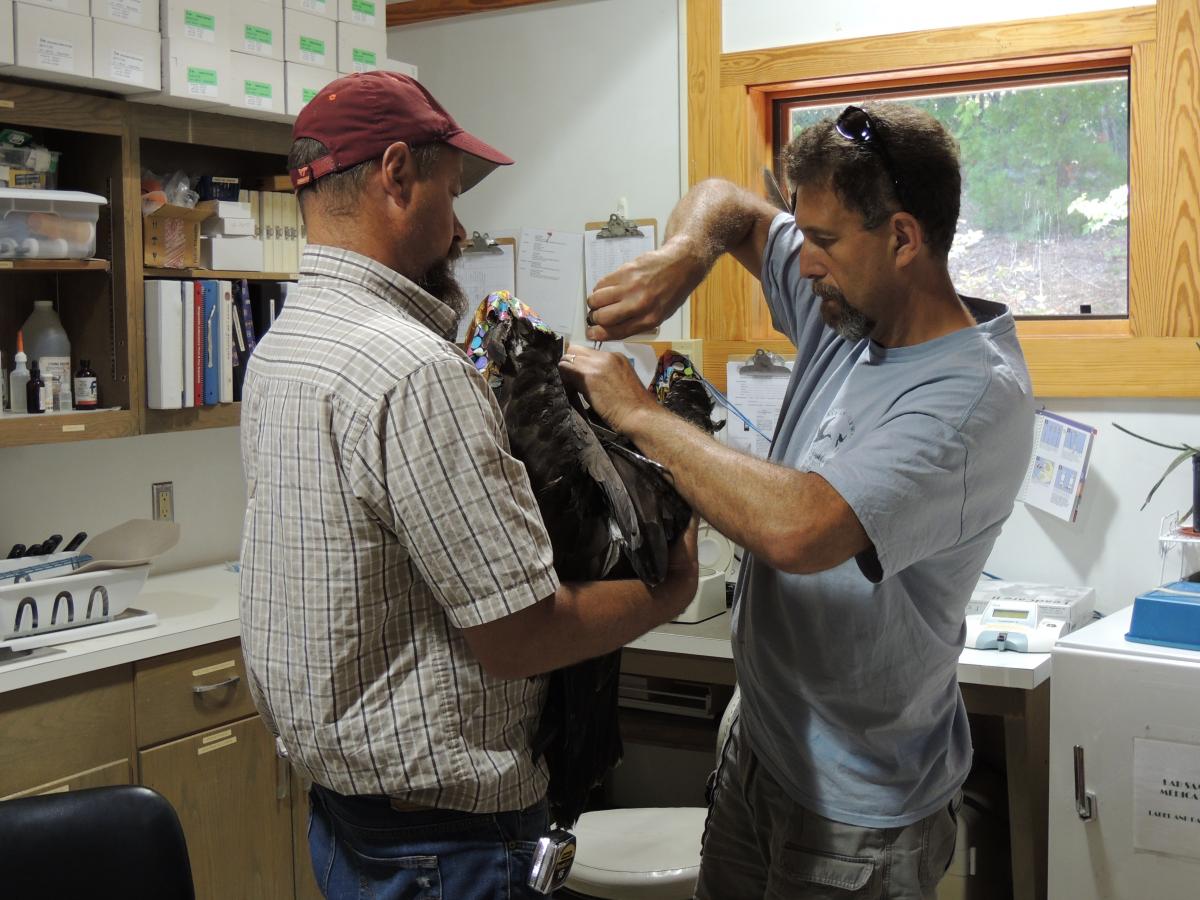 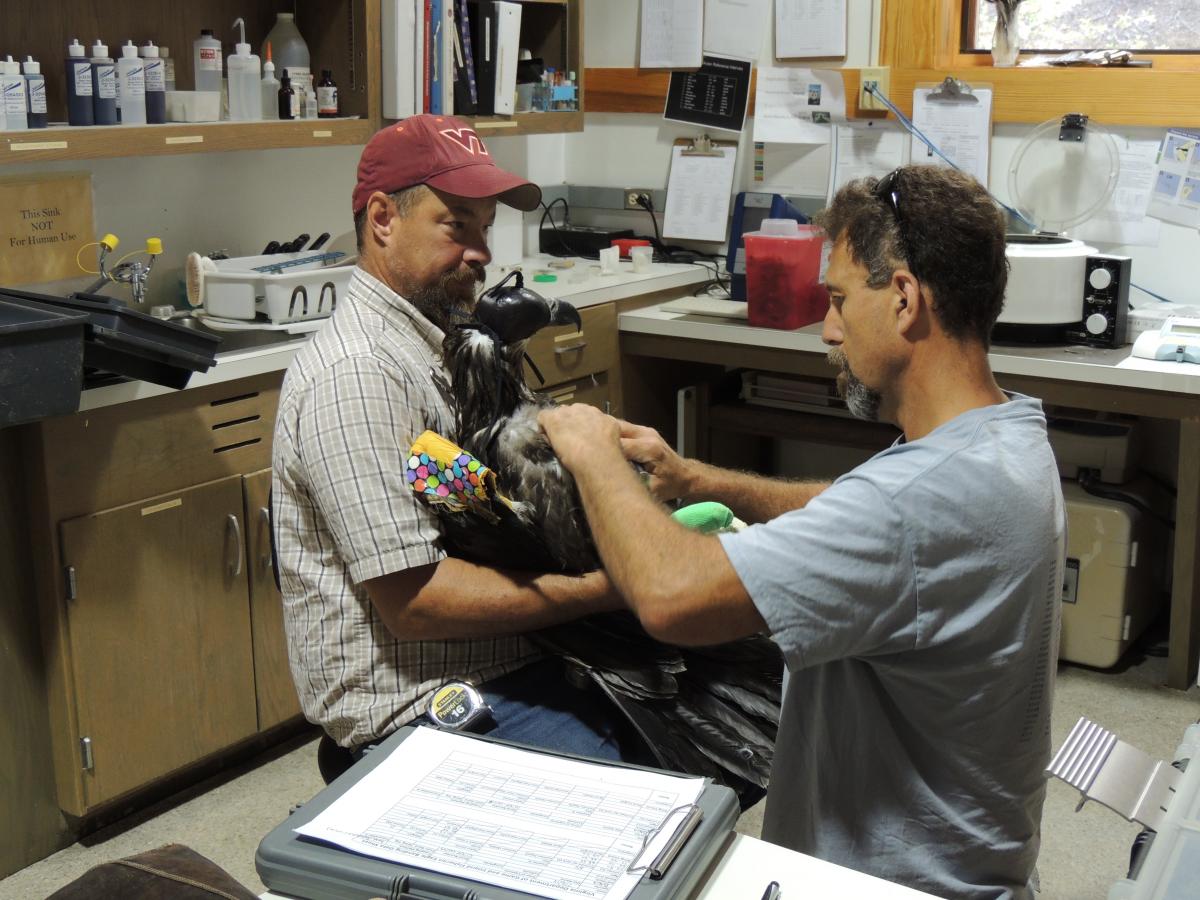 Bald Eaglets #14-0649, 650, and 867 are doing well in the Center’s A3 flight pen. The birds are eating well and their flight feathers are in good condition. The birds can often be seen on a variety of high perches via Critter Cam.

These three eaglets will be released together in Chincoteague, likely in early August. Each of the birds will be fitted with a GPS transmitter and will be a part of an ongoing research study being undertaken by VDGIF. DGIF biologists were particularly interested in returning the eaglets to Chincoteague for monitoring.

The DGIF study looks at the data received from these Bald Eagles to determine the range and behavior of Bald Eagles in Virginia’s coastal plain. Migratory behavior is studied as biologists are able to see how far Bald Eagles move in the winter season. The data is also used to discover communal roost sites of Bald Eagles. Additionally, the data plays an important role in modeling how these birds use airspace. By looking at heights at which the eagles fly, average distances, and other specifics, biologists are able to relate this eagle behavior to real-life issues, such as airstrike data.

The three eaglets at the Wildlife Center will be fitted with their transmitters several weeks prior to release; this is tentatively scheduled for the week of July 14.

The four Bald Eagles in flight pen A3 are all doing well. Eaglets #14-0649 and 0650 are becoming more adept at flying in the enclosure; Bald Eaglet #14-0867 joined the two eagle siblings in the main part of the flight enclosure on June 20. There have been some minor eagle scuffles as the three young eagles figured out the “pecking order”; eagle #14-0649 seems to be the main instigator. All were noted to be in good health during their bi-weekly foot and feather check on June 23.

This week, Critter Cam watchers will be able to distinguish between the three eaglets by the colorful duct tape on the protective wing bumpers each eaglet is wearing:

The adult Bald Eagle #14-0261 appears to be doing well. The staff will move this eagle to a separate flight pen for flight conditioning as soon as there is another A-pen available. 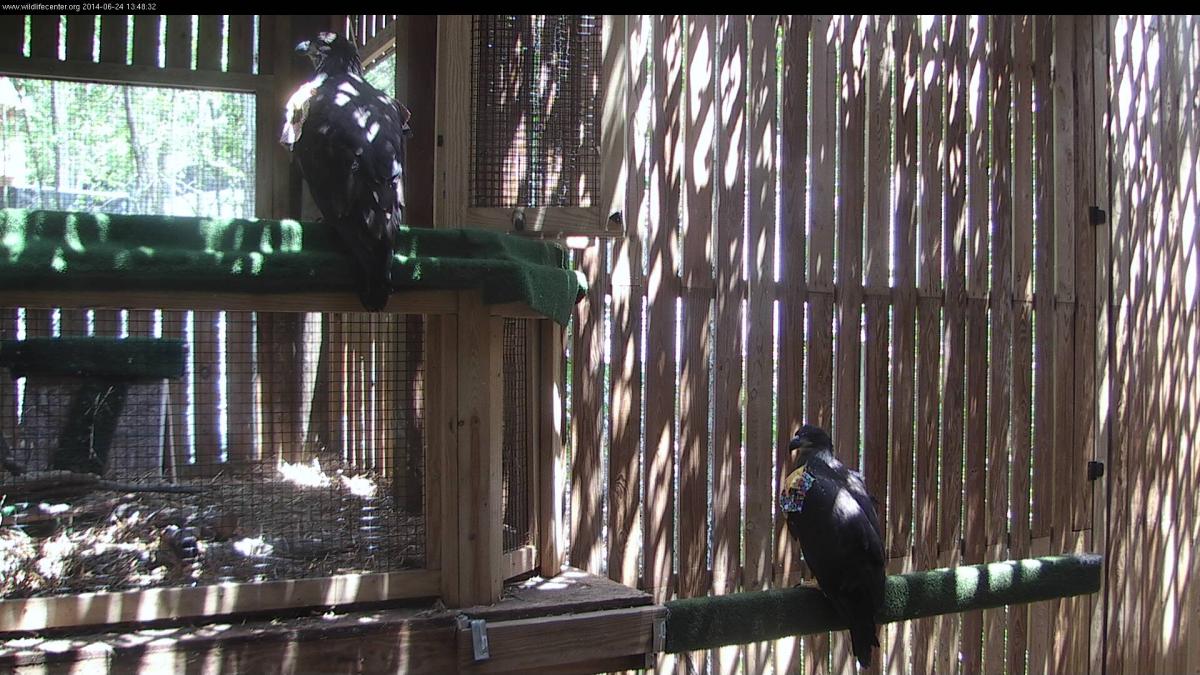 In the past week, the eaglets have been learning to fly to higher perches in the enclosure and have been perching near the adult eagle in the flight pen [#14-0261]. 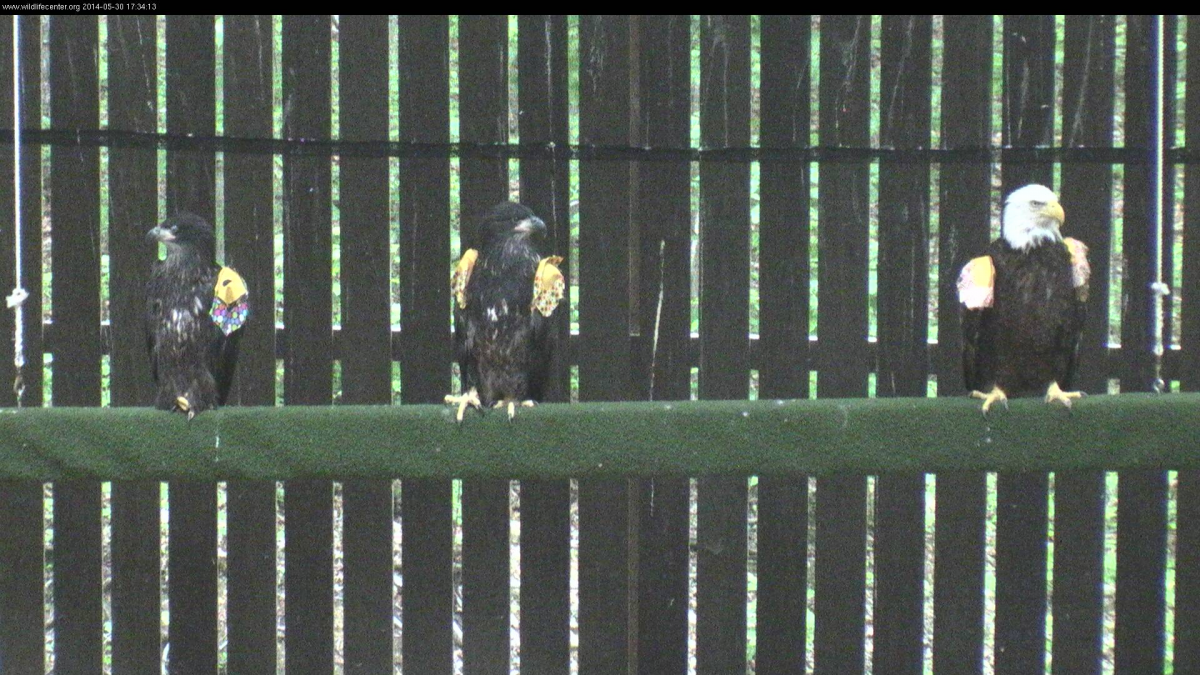 The three eagles have caused some trouble for the veterinary staff; they have been seen picking at each other’s carpal ‘bumpers’ – bandages applied to the wrists of each bird to protect the wings from injury. Eaglet #14-0649 removed the white band on his leg that was used for identification, making it a challenge for the staff to differentiate the two young birds.

The eaglets need a couple of weeks to build up strength and stamina for flight. Once they are strong enough, the rehabilitation staff will begin exercising the birds daily.

Since their admission, Bald Eaglets #14-0649 and #14-0650 have been bright and active with strong appetites. The eaglets have been branching out from their nest, flapping their wings, and hopping to the different small perches in the tower of A3. This indicates that the eaglets may be close to fully fledging. 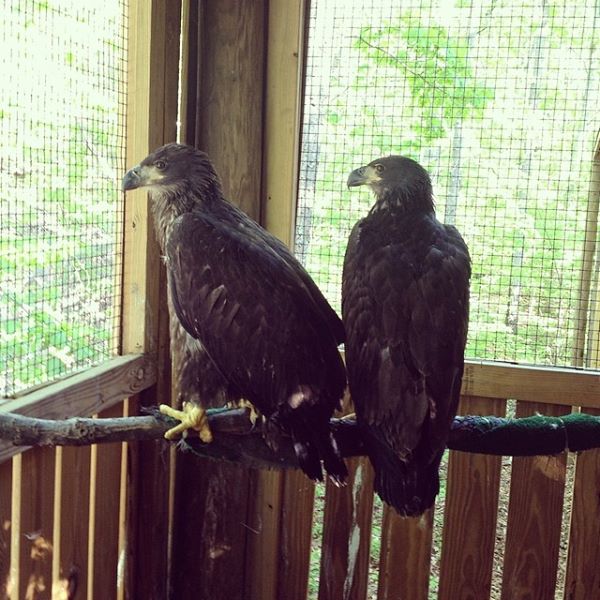 On May 19, certified wildlife rehabilitator Amber Dedrick opened the doors between the tower and the main flight pen, giving the eaglets the space to properly fledge.

We expect the eaglets will begin exploring their new space soon – watch Critter Cam to see when the eaglets make their first flight attempts!  Over a period of a few weeks, the eaglets will increase their strength, stamina, and flight capabilities.