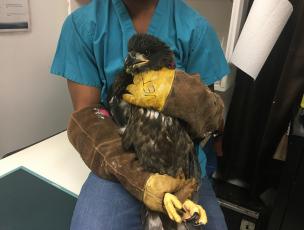 On April 30, a male fledgling Bald Eagle was admitted to the Wildlife Center from Virginia Beach. The eaglet came from an active nest on Linkhorn Bay; part of the nest fell out of the tree on April 29, and one of the two young Bald Eaglets fell with it. The bird was not quite ready to start actively flying, and the eaglet was not able to be safely re-nested, so he was taken to a local permitted wildlife rehabilitator prior to being transferred to the Center.

Dr. Ernesto examined the eaglet when he arrived and found no injuries on exam or radiographs. Blood work was within normal limits, with no lead detected. The eaglet was moved to flight pen A1 so that he could be with another Bald Eagle, patient #20-0172, a mature female.

According to Reese Lukei with the Center for Conservation Biology, the parents of this eaglet are an older pair of Bald Eagles. CCB biologists first noted them nesting together in Virginia Beach in 2009, making them at least 17 years old. From 2009 to 2020, the pair of eagles produced 23 chicks; 2013 was the only year that they had no offspring.

During the week of May 4, the two eagles will be moved to flight pen A3 -- watch for them on the Center's Critter Cam!

Your donation will help provide care to this young Bald Eagle, until he is old enough to be released back to the wild. Please help!

Bald Eaglets #20-0744 and #20-0803 were released on August 12 back in Virginia Beach. Wildlife Center president Ed Clark reported that both birds flew off beautifully.

Prior to release, Reese Lukei, from The Center for Conservation Biology, banded both birds with federal and state research bands. Bald Eagle #20-0833, a female, now has a band with letters "RZ"; the smaller young eagle is now "SA". 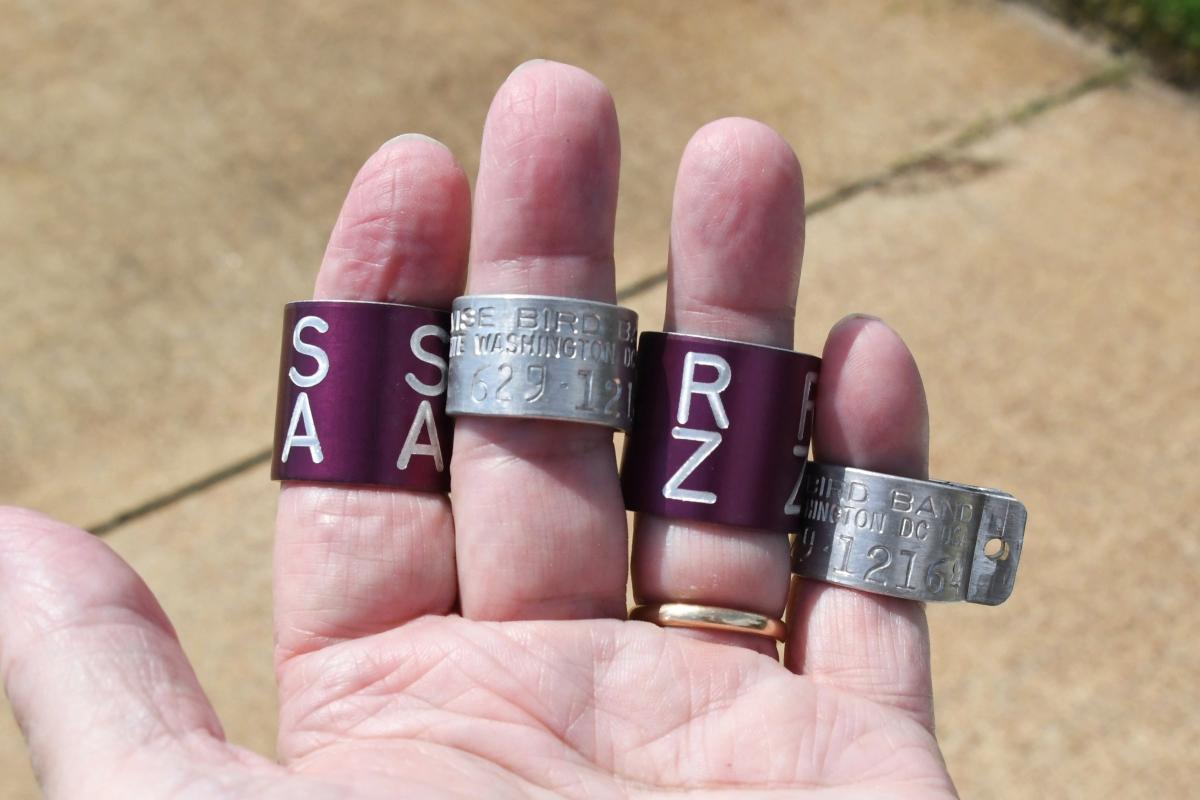 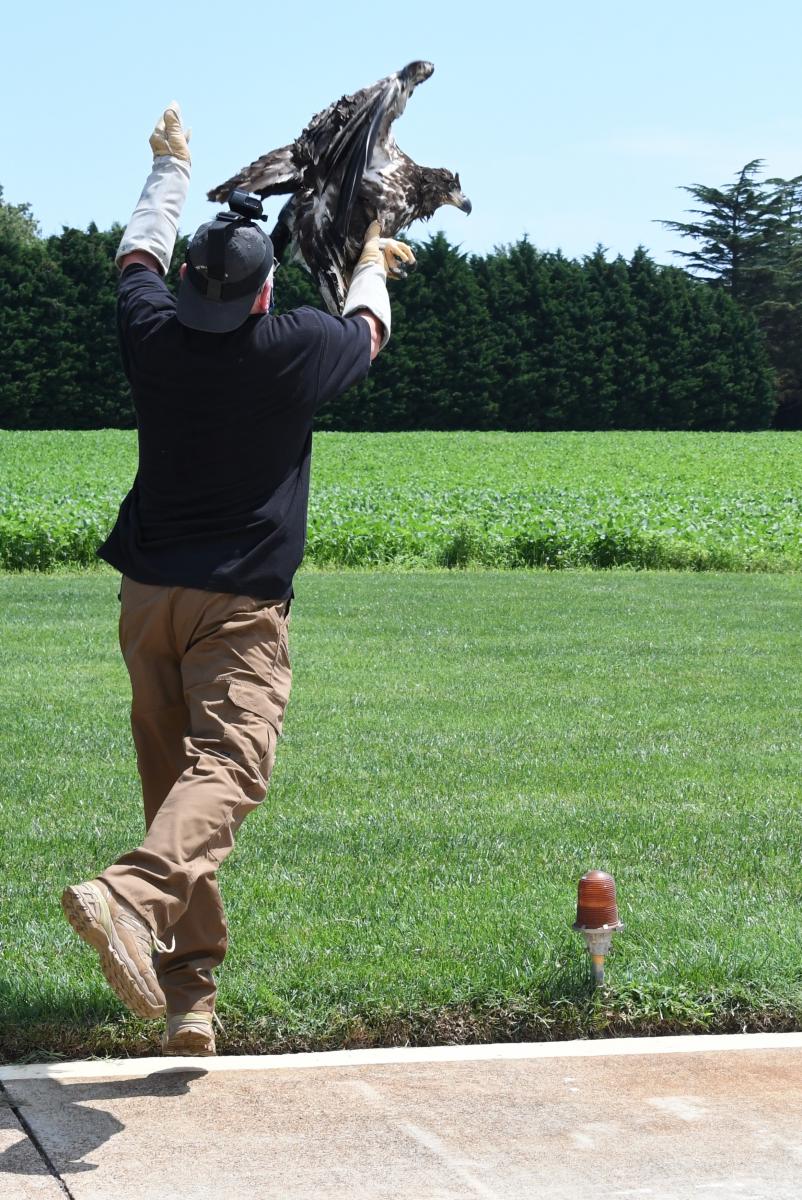 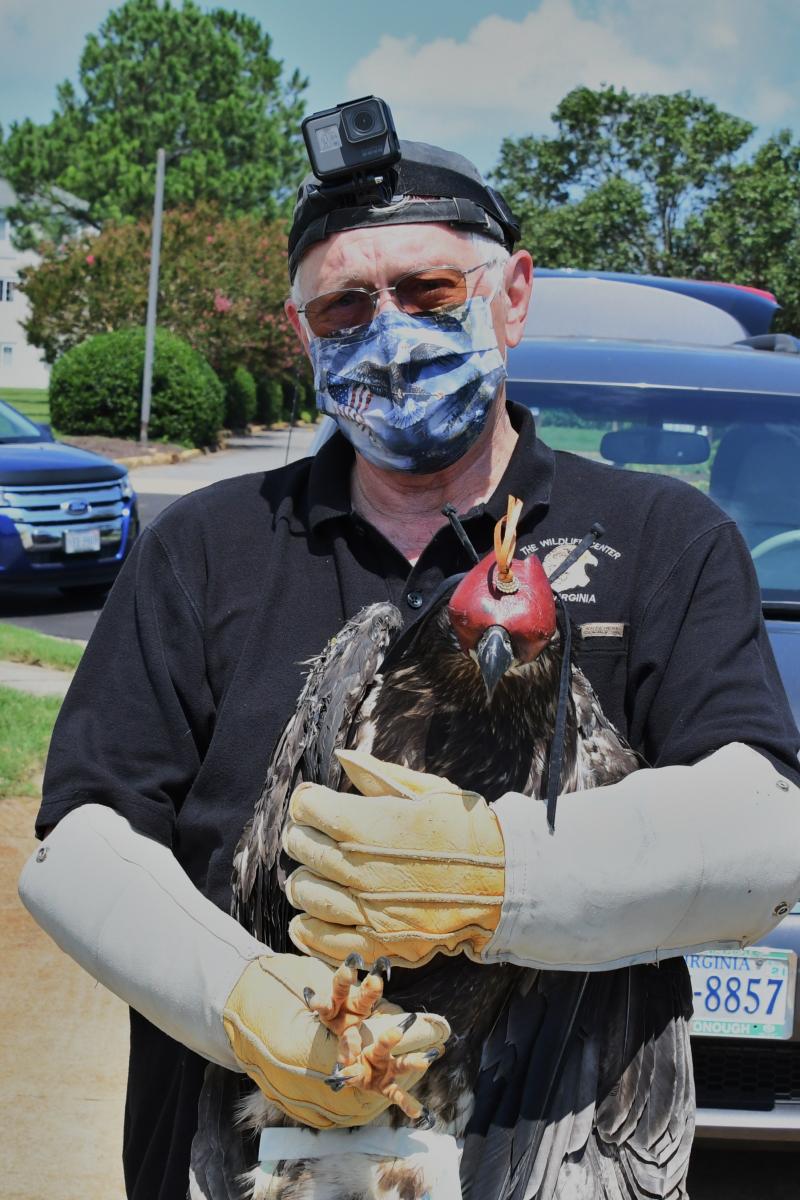 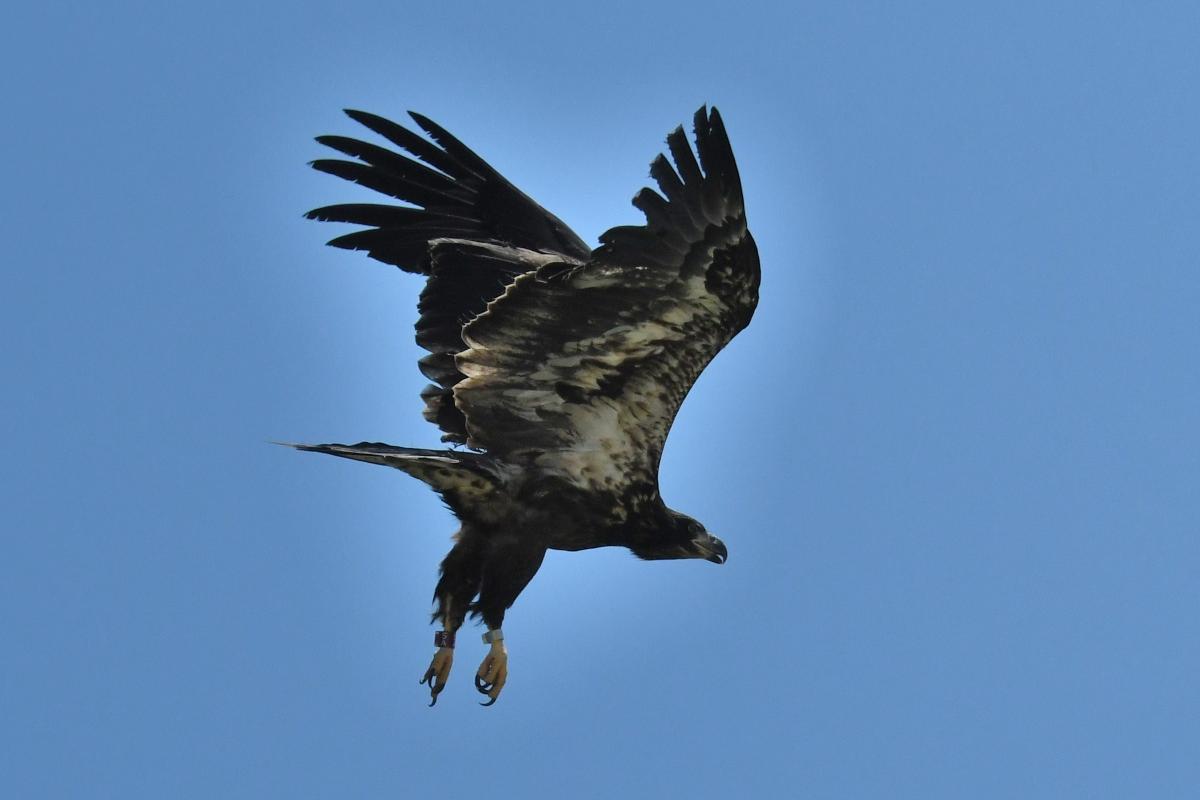 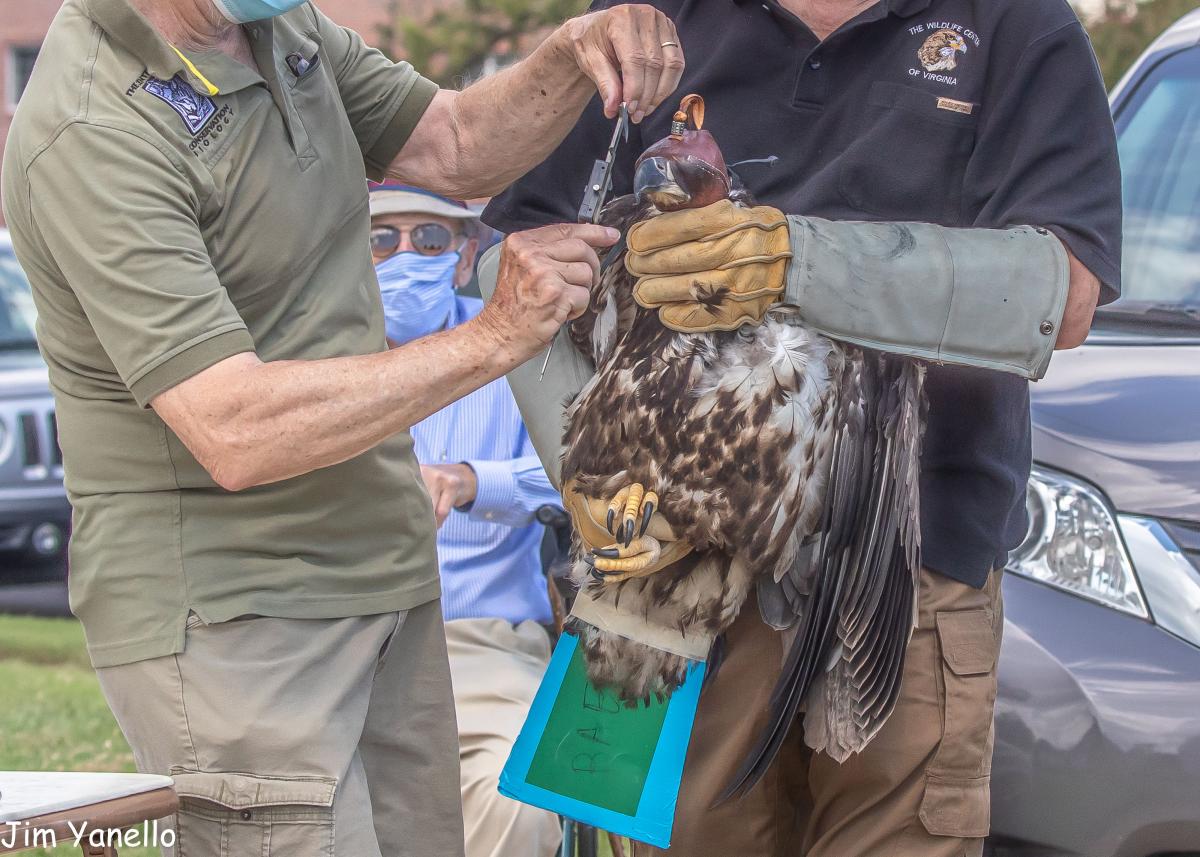 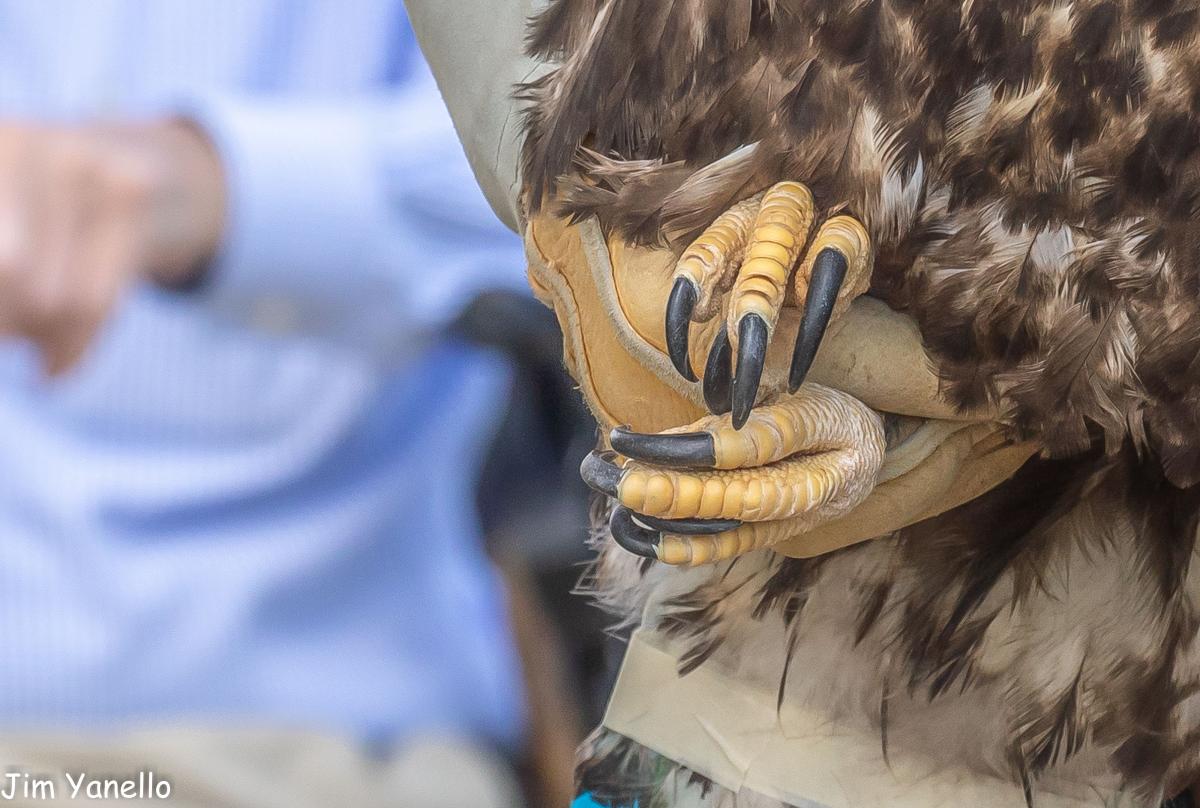 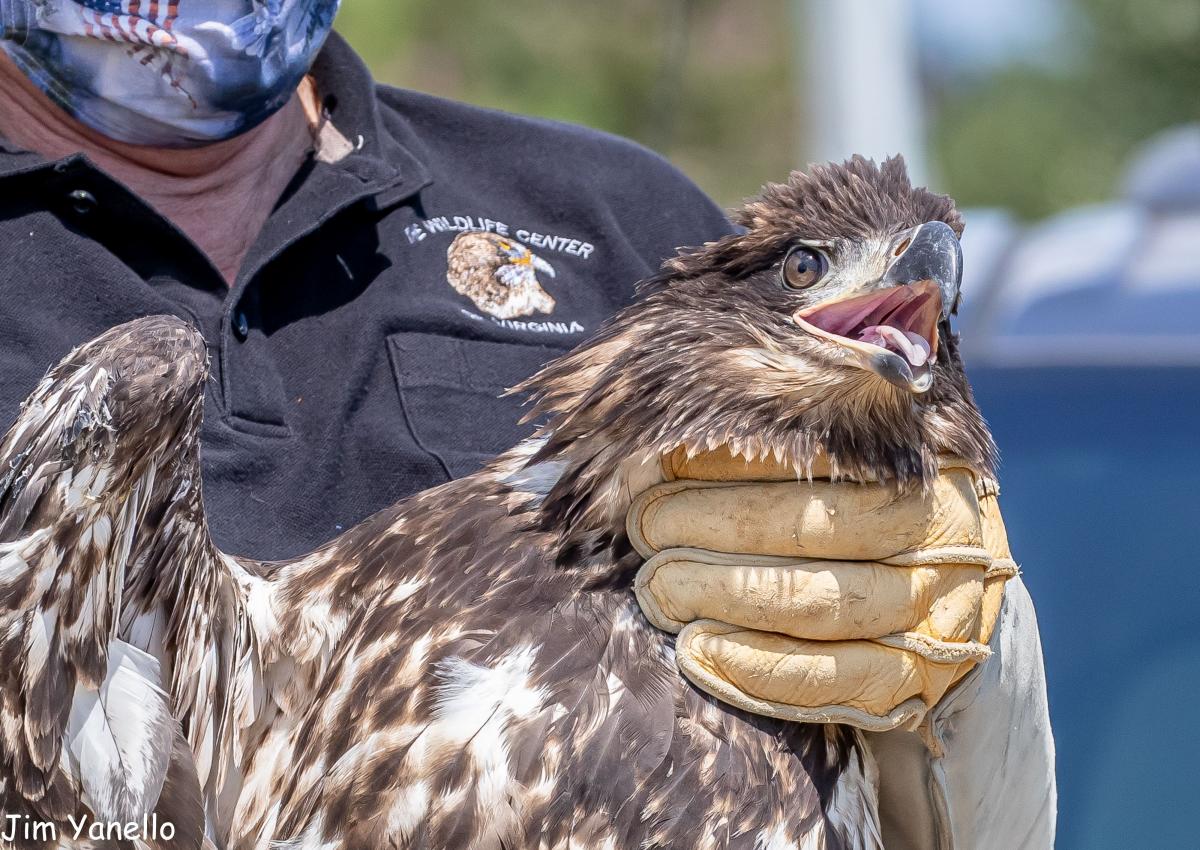 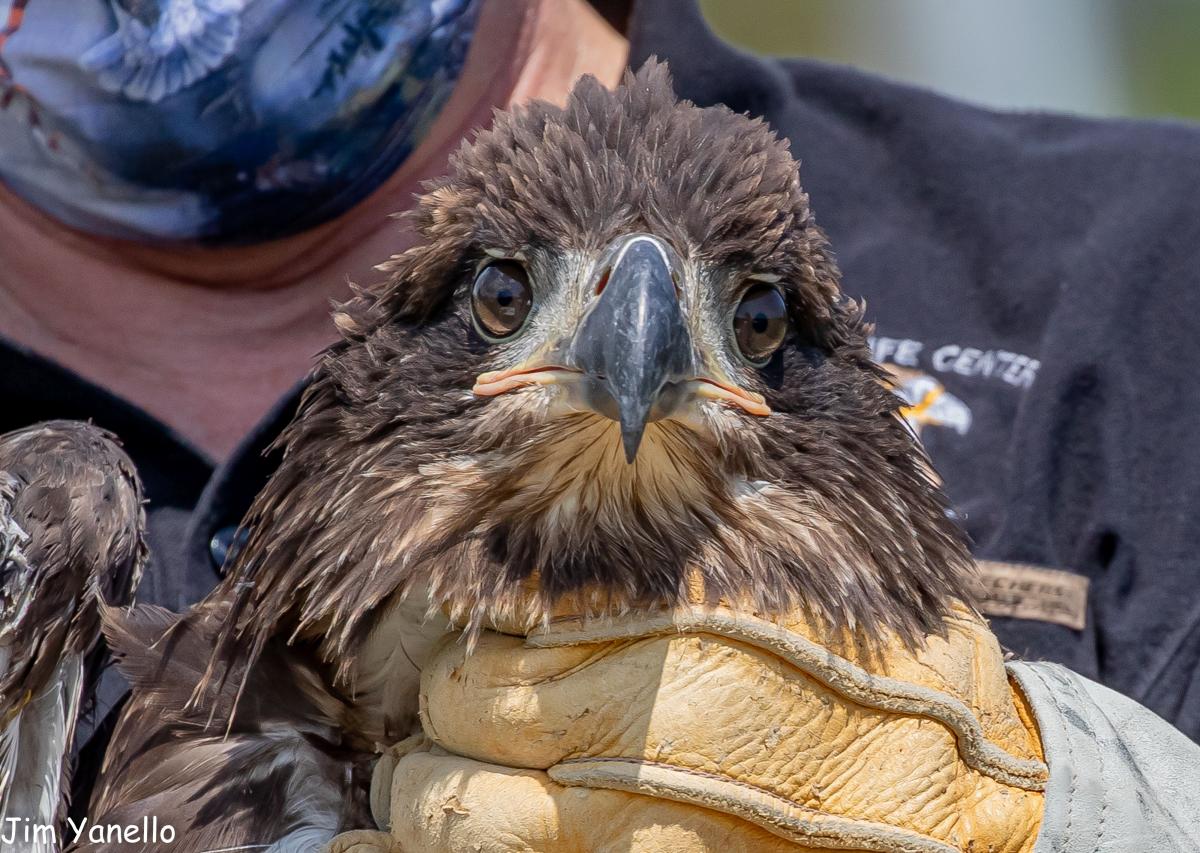 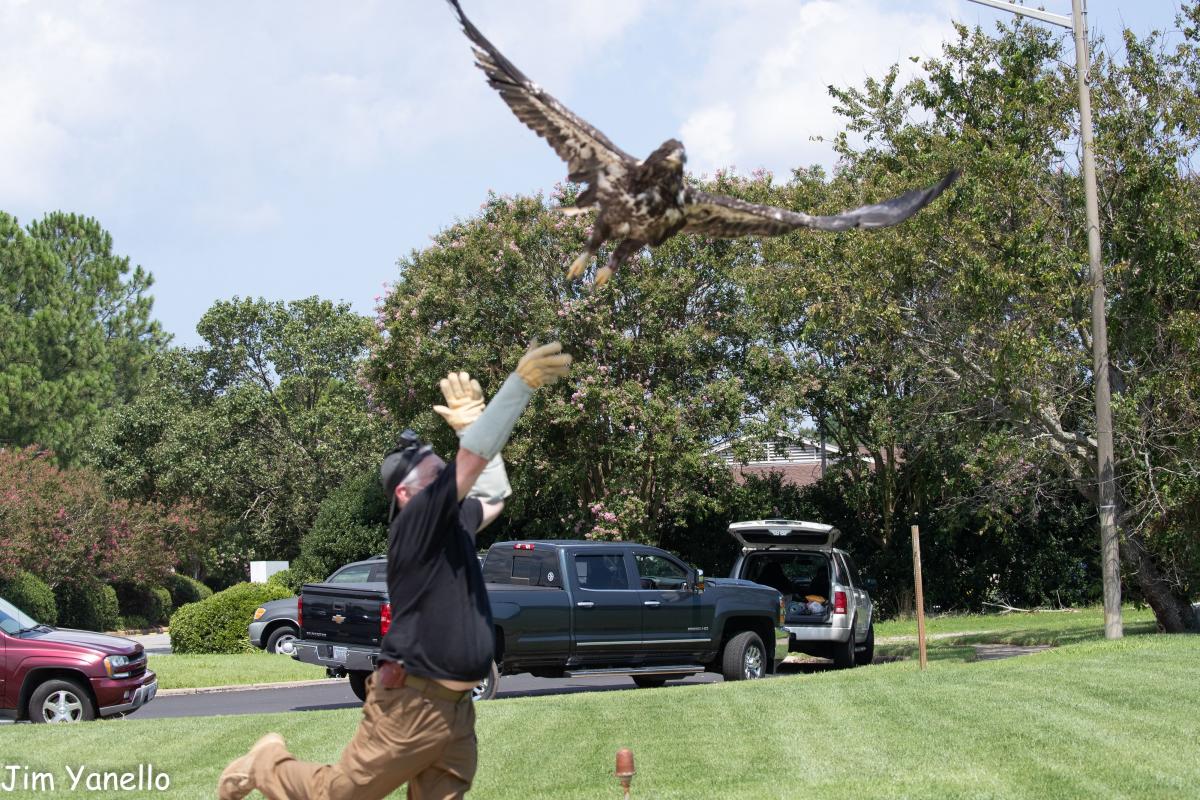 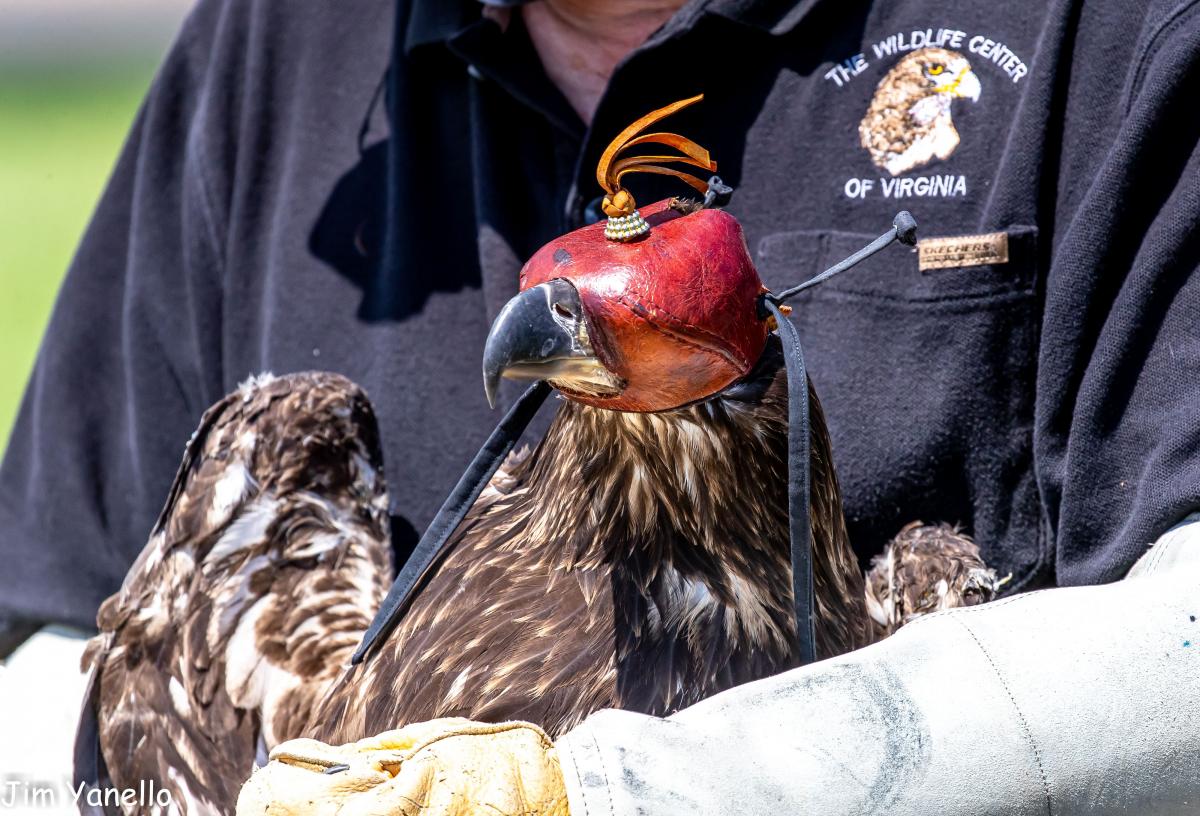 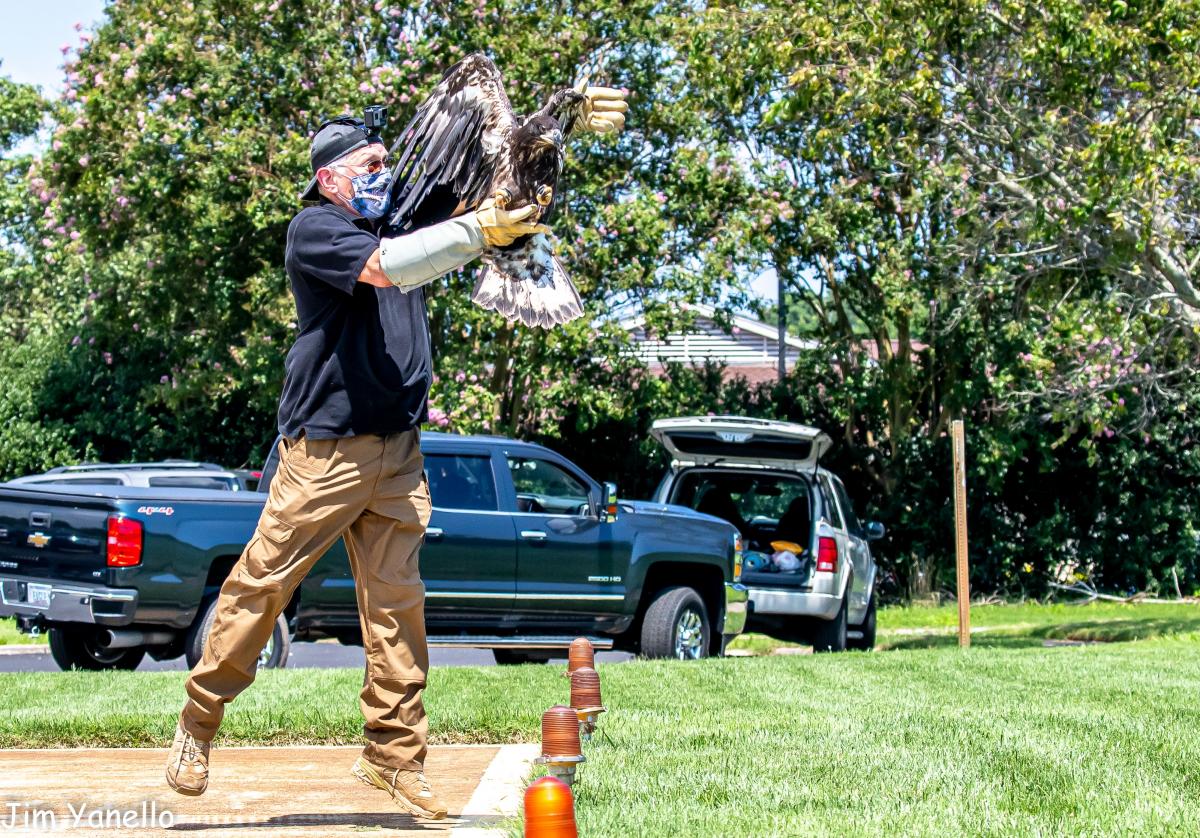 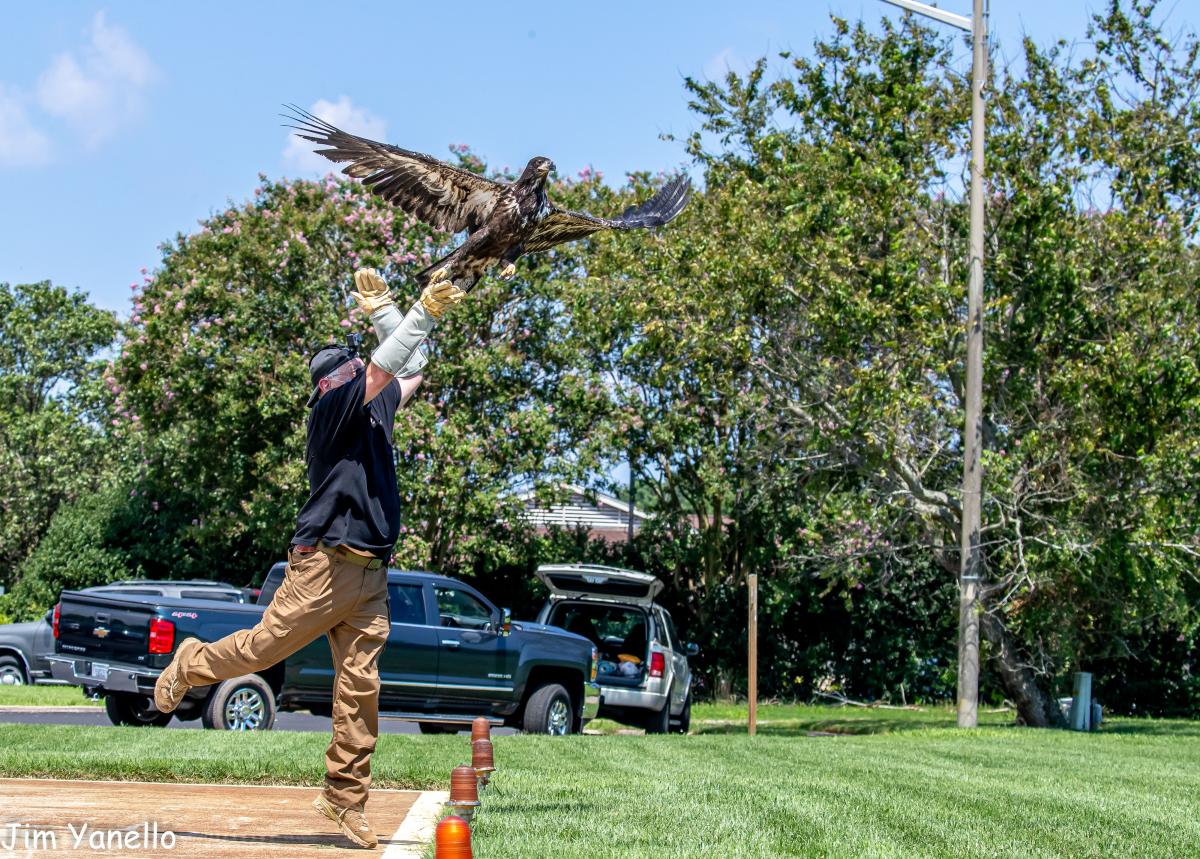 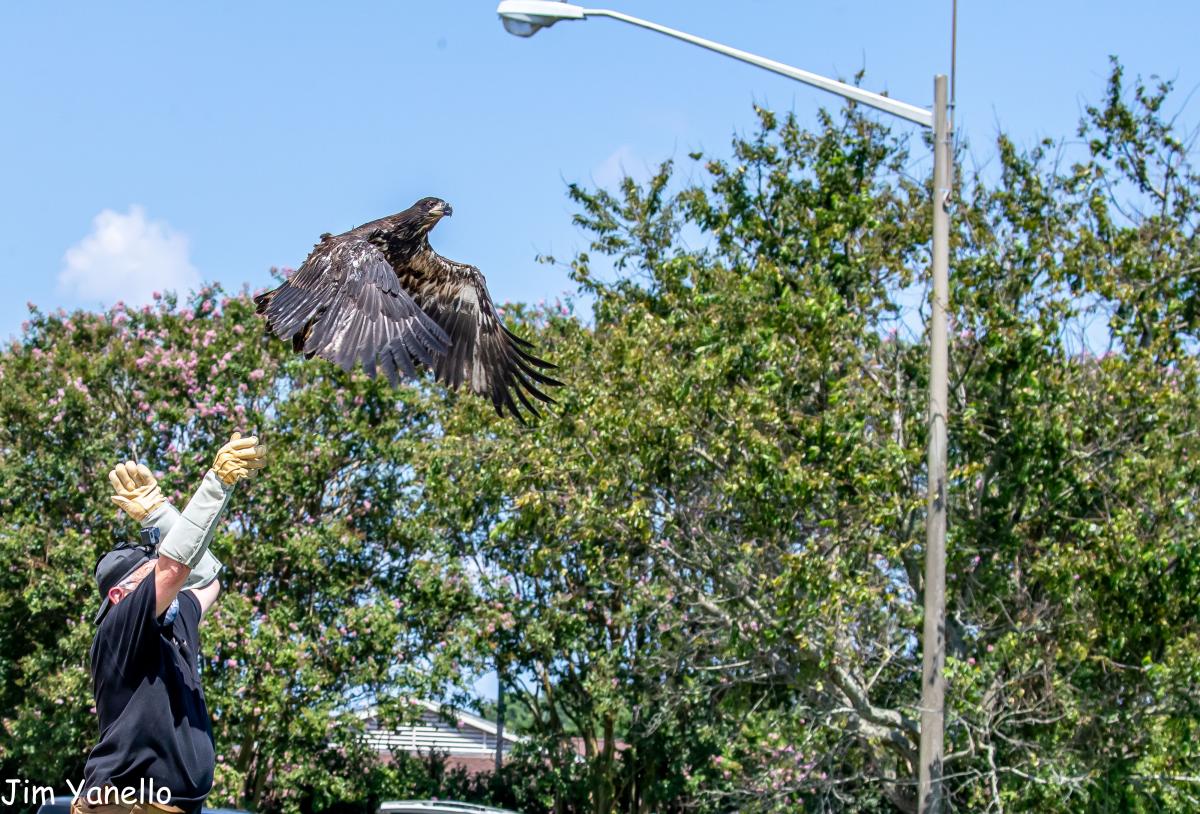 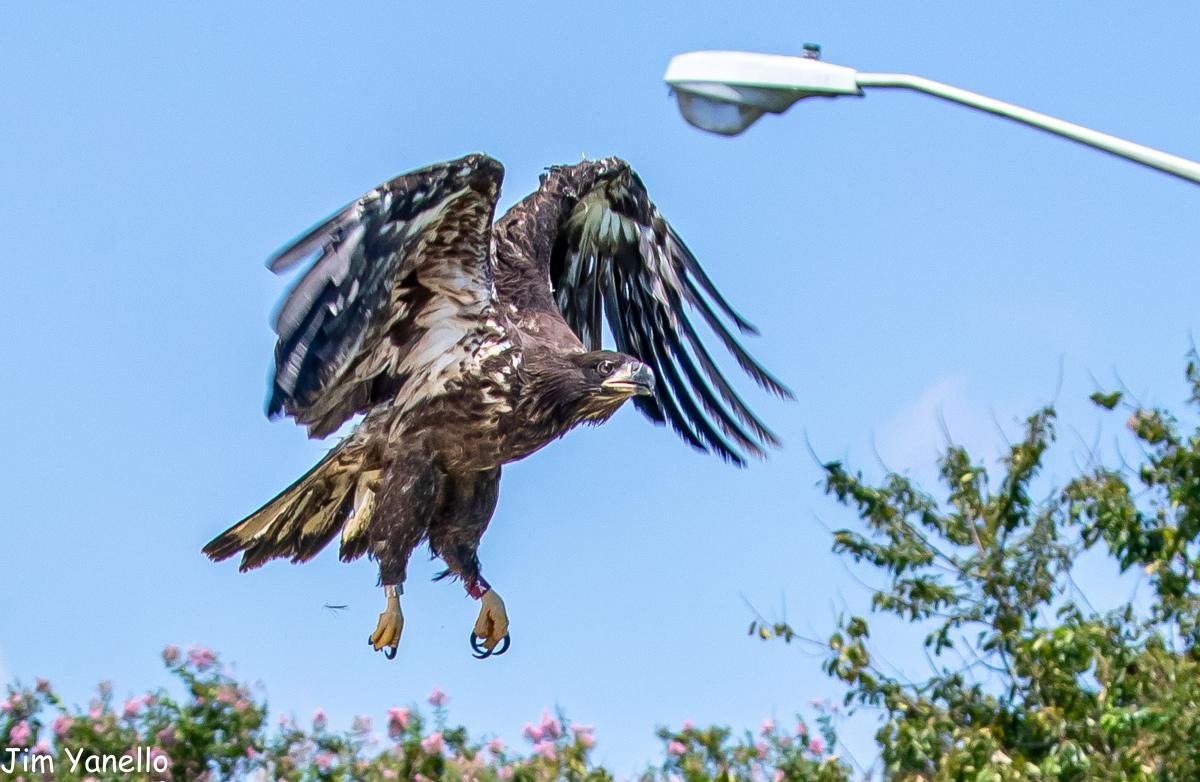 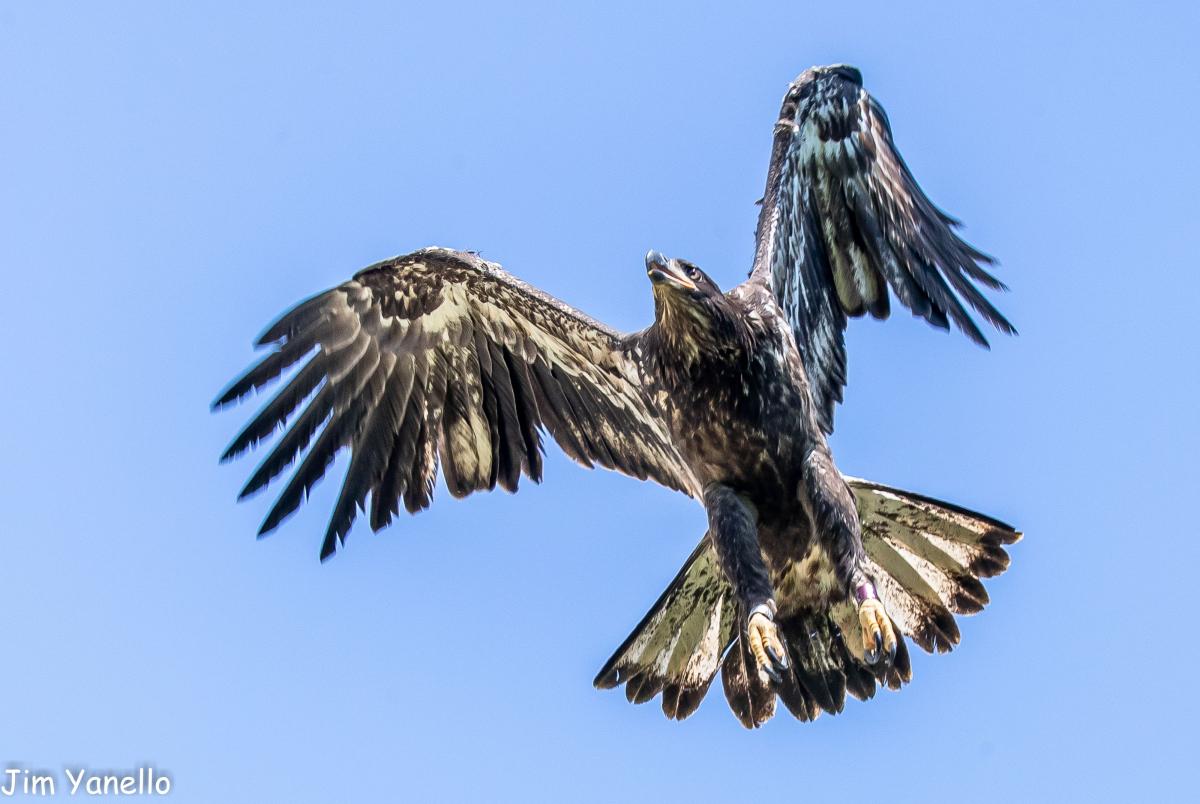 This past week, two of the young Bald Eaglets of 2020 -- #20-0744 [purple wing bumpers] and #20-0803 [pink wing bumpers] were moved back to flight pen A3, after some repairs were made to the lofted nest area. The two birds started a daily exercise procedure with the rehabilitation staff; currently, the birds are flying back and forth just a few times to start to slowly build their stamina.

The eaglets in the A3 flight pen have been doing well during the past months; the birds have become more and more active as they've grown. This weekend, the four eaglets will be moved to flight pen A2 so that some repair work can be done on the eagle loft area next week; once the repairs are done, two eagles will be moved back to A3, and two will remain in A2. This will allow the growing birds to utilize more space during regular daily exercise in preparation for their late summer release.

All four Bald Eaglets are doing well in the large A3 flight pen. The newest eagles, #20-1128 [lime green bumpers] and #20-1129 [no color of bumpers] fledged from the tower over the weekend, and are exploring their larger area. The other eaglets, #20-0744 [purple bumpers] and #20-0833 [pink bumpers] are making short flights and hanging out on higher perches with adult Bald Eagle #20-0172. The eaglets will start a daily exercise program once they are older and all of their flight feathers have grown in; typically, young eagles are released toward the end of summer.

The two Bald Eaglets are doing well and growing in the A3 flight enclosure loft; the birds are confined to this space while they grow in their many flight feathers and start becoming more active. Bald Eaglet #20-0744 -- the male -- is marked with purple protective wing bumpers; his sister, #20-0803, has pink protective wing bumpers. Both birds are eating rats and fish and have gained weight since arriving at the Center.