On May 25, a young Bald Eagle nestling fell from its nest in Virginia Beach; the eaglet hit a branch and stayed there for two nights, before falling out of the tree entirely on Sunday, May 27. Rescuers were unsure if the eaglet was injured; they also didn’t want to risk re-nesting the bird and making the eaglet’s siblings jump from the nest prematurely. The nest is known as #1401 by the Center for Conservation Biology’s eagle nest monitoring project; the parent of this young eagle is known as “ND”, one of the young from the Norfolk Botanical Garden nest. ND hatched in 2010, and is younger brother to Buddy, the Center’s non-releasable Bald Eagle.

Dr. Ingrid, one of the Center’s veterinary interns, examined the young bird when it arrived at the Center. The eagle was a little thin and Dr. Ingrid could feel an increased laxity (looseness) in the eagle’s left shoulder joint. The eaglet also had some abnormal respiratory sounds and ocular trauma to both eyes. Radiographs confirmed contusions to the eagle’s lungs (likely from the impact of the fall) as well as some changes to the eagle’s left wing. While the extra laxity of the wing joint may be due to the eaglet’s young age, it could also signify a dislocation of the developing joint. Blood work revealed anemia and trace amounts of lead in the bird’s system, testing positive at 0.03 ppm.

The prognosis for this eaglet is guarded; the eye injuries and shoulder injury are significant and may prevent this bird’s release if they don’t heal correctly. The veterinary team is providing fluids, food, pain medication, and medicated eye drops for the eagle’s eyes injuries. The staff are watching the bird closely for any neurological deficits due to the history of impact trauma.

Your special donation will help the Center to provide care to this injured Bald Eaglet … and all of the patients admitted in 2018. Please help!

On Monday, October 15, Dr. Ernesto was able to perform a post-mortem examination on Bald Eagle #18-1139. The young eagle was released on September 6 in Virginia Beach; 17 days after release, the eagle was found dead by the side of the road in Chesapeake, Virginia.

Dr. Ernesto examined the body and found significant trauma. Nearly a third of the eagle’s beak was completely missing; the presence of dried blood indicated that this injury happened before death. The eagle’s left eye was also full of blood. Radiographs revealed skull fractures and a shattered right elbow. Given that the eagle was found by the side of the road, it’s likely the bird was hit by a vehicle and severely injured from the impact. Dr. Ernesto reports that, overall, the bird was in good body condition. 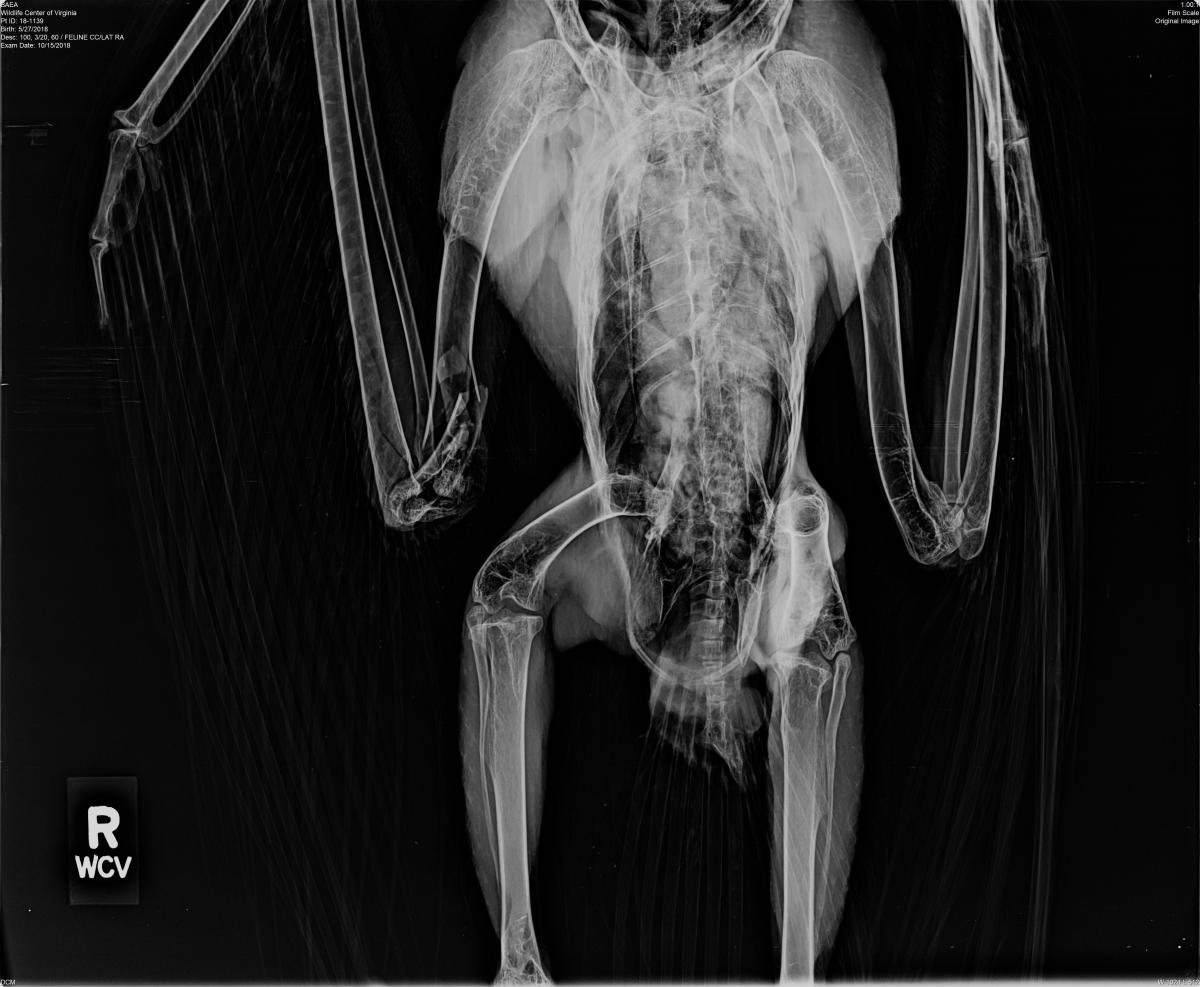 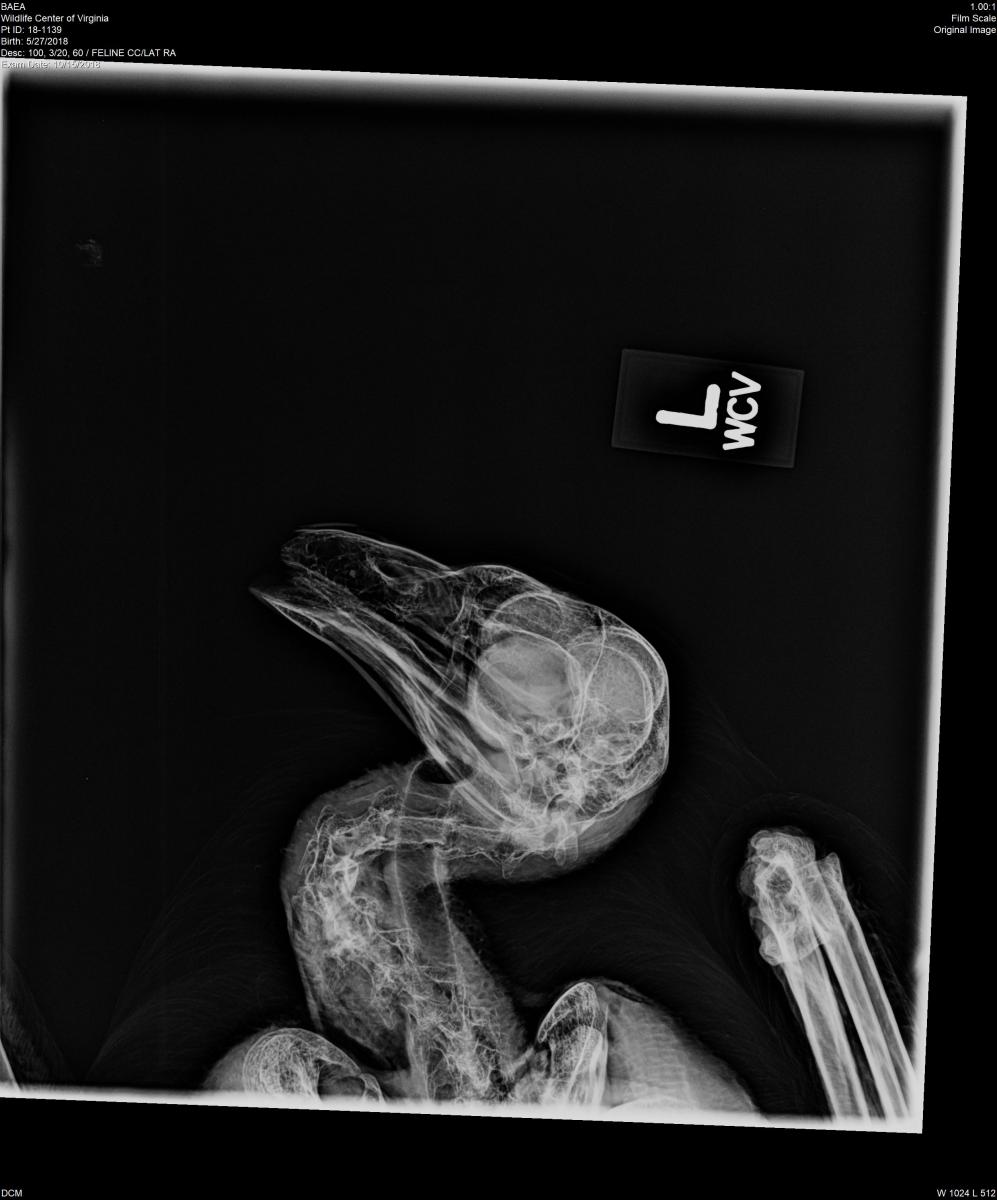 The Wildlife Center received sad news about Bald Eagle #18-1139, the hatch-year eagle that was released on September 6 in Virginia Beach. On September 23, 17 days after the release, the deceased bird was found by the side of the road in Chesapeake, Virginia. The bird was picked up by a police officer and turned over to animal control. Officers were able to report the band number to the bird banding lab, and the Wildlife Center receive a notification.

The young eagle was about 17 miles southwest of his release location and was found by the road beside the Battlefield Meadows development.

At some point, the Center veterinary staff hopes to conduct a post-mortem examination on the eagle.

In the past two weeks, the eaglet flew well in flight pen A3, and did not display any unusual behavior. Test results came back negative; the bird appeared to be in great health. Dr. Ernesto believes that the unusual behavior displayed by the young eaglet was due to the eagle’s personality – the bird is more defensive and tends to “stand his ground” more than other eagles the Center has recently treated. The eaglet’s behavior is reminiscent of Bald Eagle NX, treated at the Wildlife Center in 2011-2012.

After much discussion, the team decided that a quick and quiet release would be in the best interest of the young eagle. Dr. Ernesto took the eagle back to Virginia Beach on the morning of September 6 and successfully released the bird with the eagle’s transporter and a few photographers. The eagle flew away from the small group of people, around a building, and gained height as he flew out of sight. 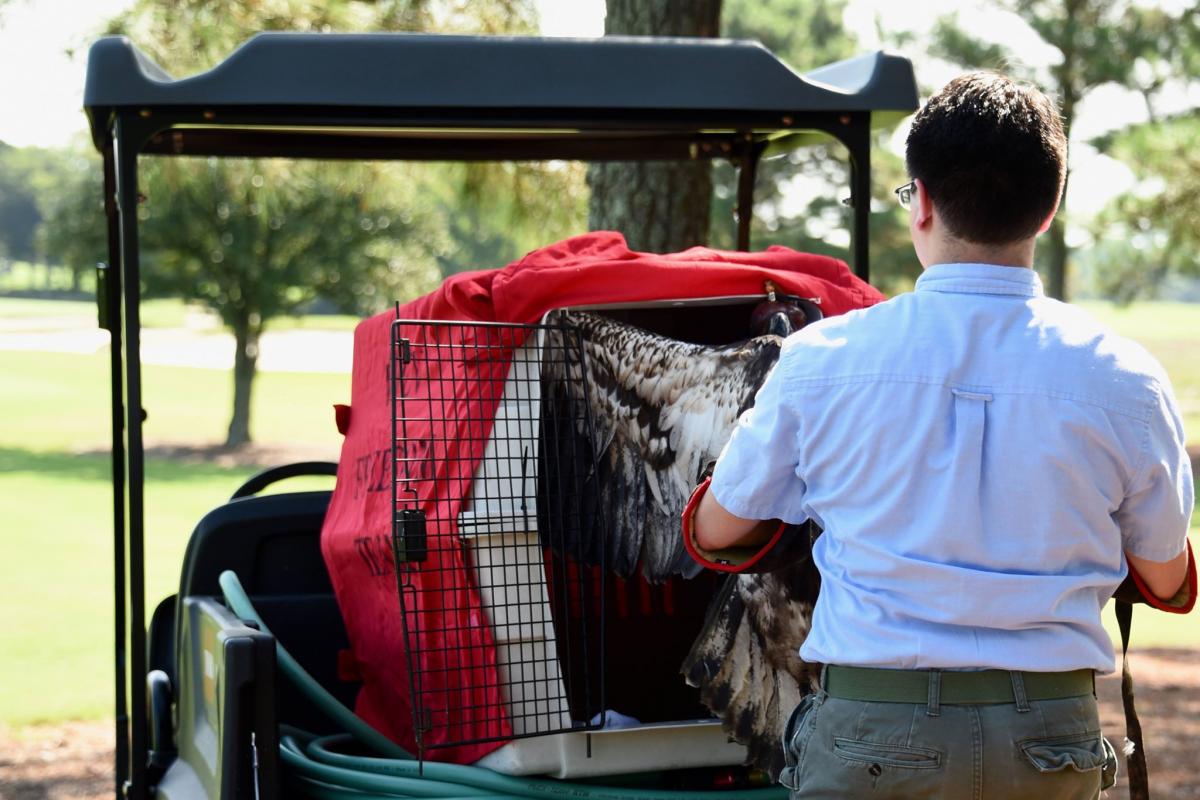 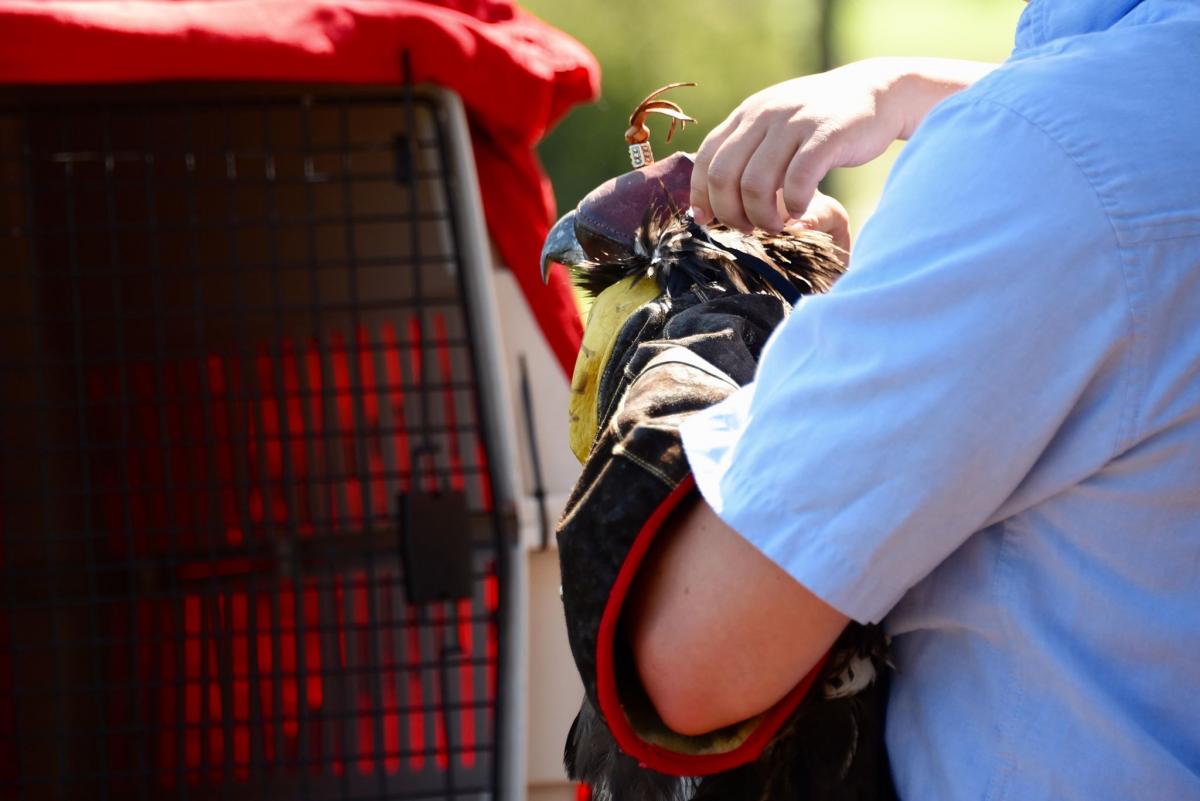 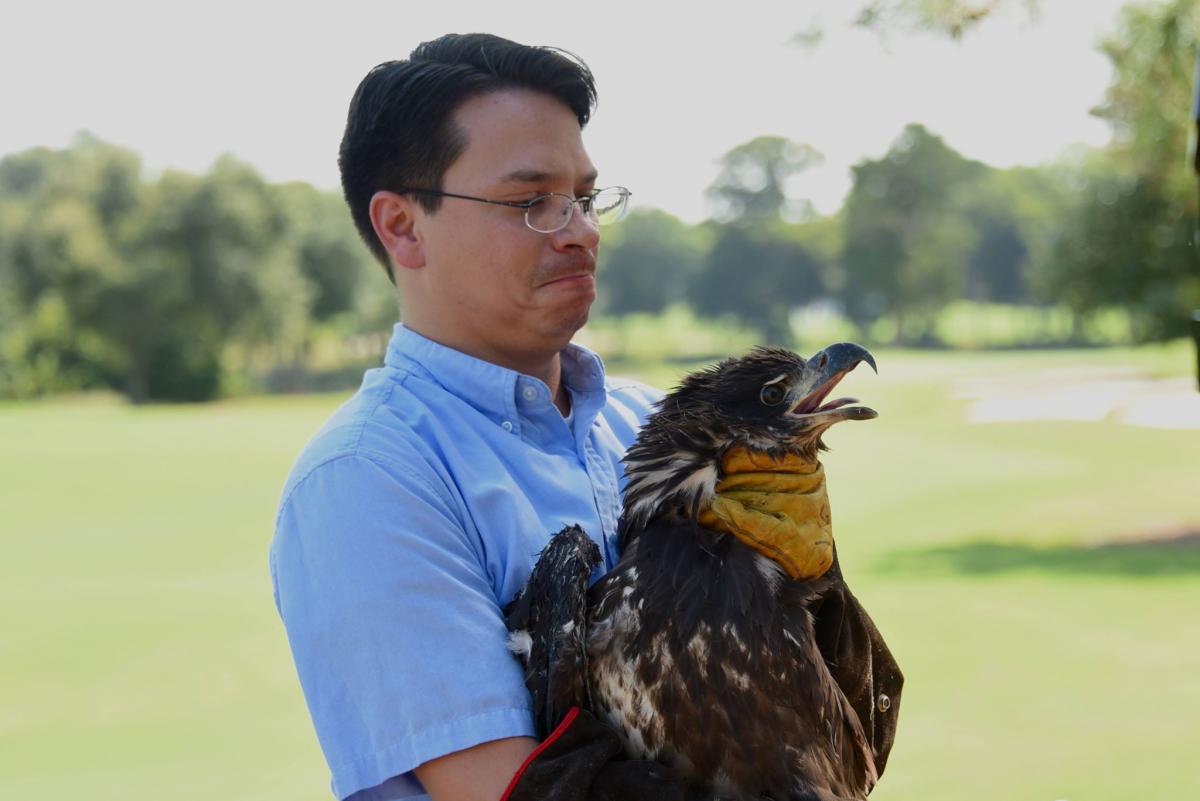 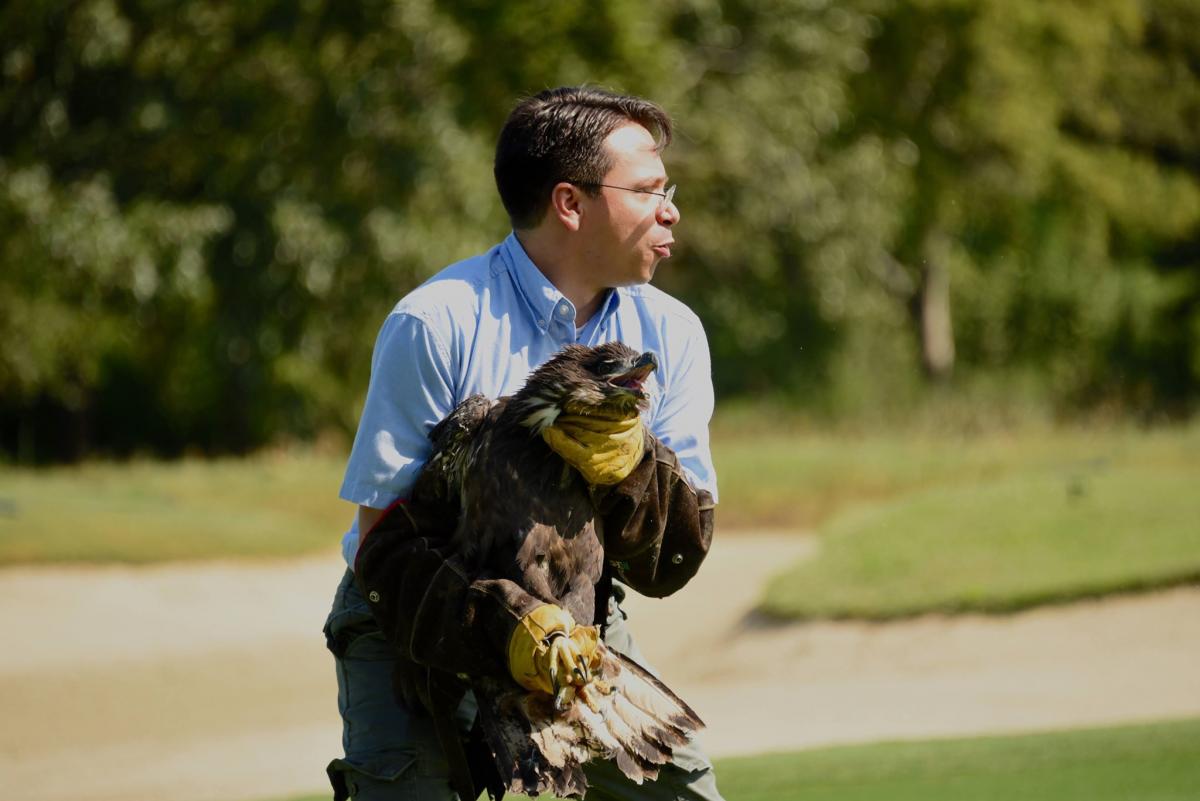 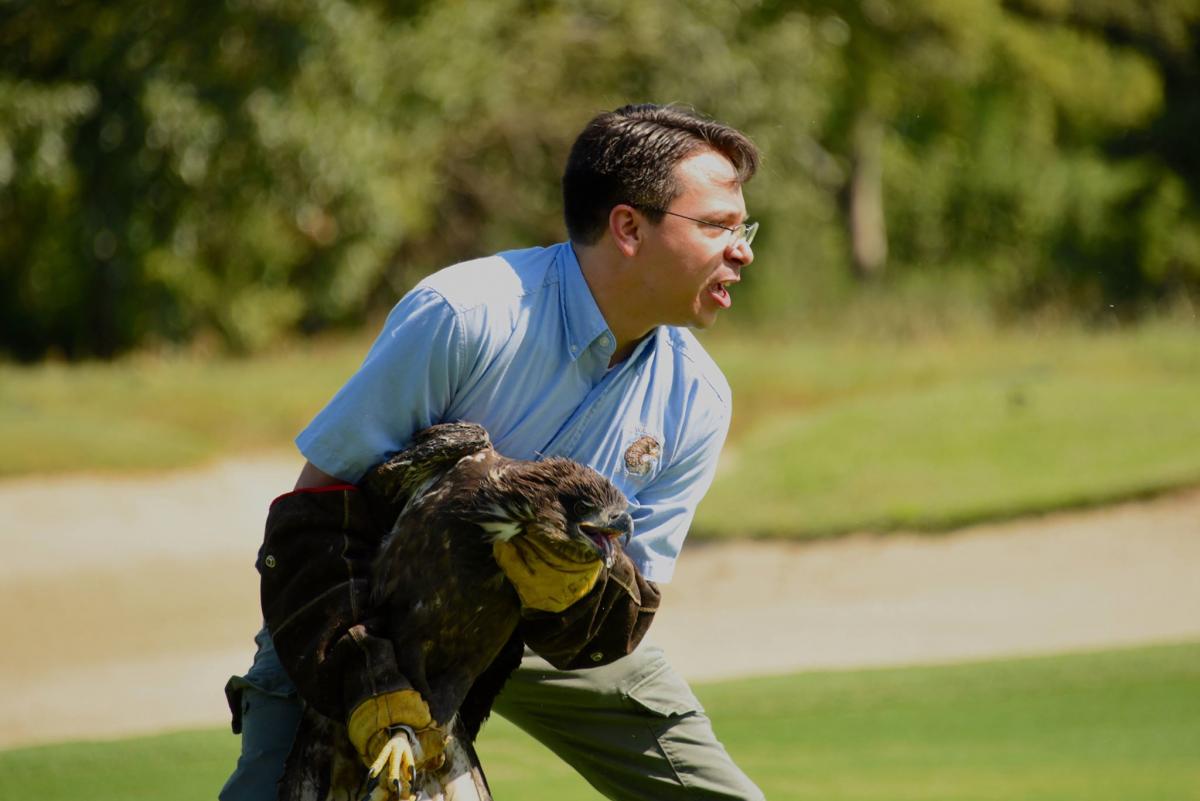 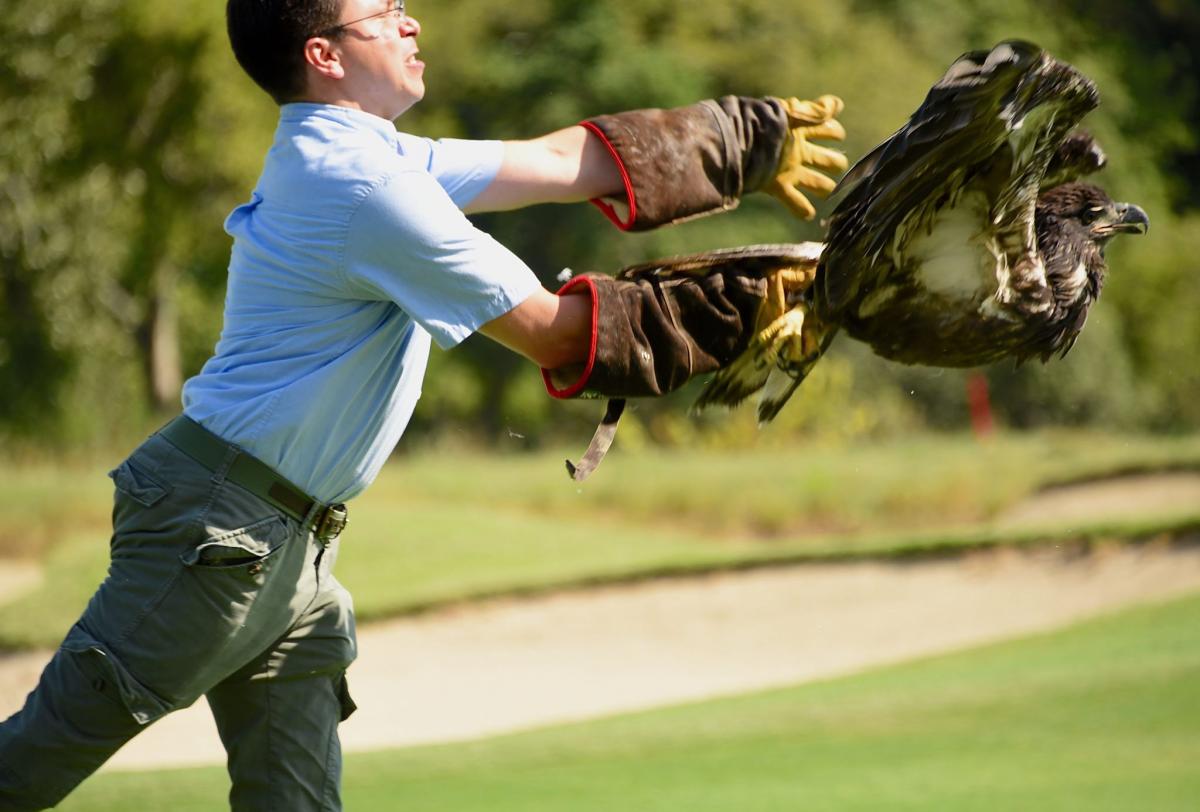 The veterinary team has been carefully assessing Bald Eagle #18-1139 during the past week, including monitoring the bird’s behavior on Critter Cam. The eagle is often perched on the very highest perches in the enclosure and has no issues flying down to low perches for food, and returning to the high perches.

The test results for the aspergillosis panel have not yet returned. The team will wait for test results and will continue monitoring, but so far, no unusual behavior has been seen.

During the past five days, Bald Eaglet #18-1139 has not been flying well in the A3 flight pen. It’s been difficult for the staff to fully evaluate, as the eaglet is also extremely stubborn, but the staff became concerned last week when the young bird flew into a perch.

Dr. Ernesto examined the eaglet on Friday, August 17 and did not find any issues with the bird. When Dr. Ernesto tossed the bird back into A3, the young bird quickly turned around and landed on the ground, displaying defensive behavior. The staff monitored the eaglet closely via the Critter Cam for the rest of the day and saw that the bird was able to reach the highest perches and was making flights in the enclosure.

On Sunday, August 19, the rehab staff noted that the eaglet was not behaving normally, and was attempting to fly with a pronounced tilt to the right. The eaglet’s right wing was wet and covered in dirt. The bird came into the hospital for an examination and radiographs and spent the night indoors. On Monday, August 20, Dr. Ernesto evaluated the bird and his entire medical record. Dr. Ernesto couldn’t find any signs of injuries on radiographs or physical exam. While this eaglet has always had some subtle shoulder laxity, any significant underlying problem should’ve manifested on radiographs. In-house blood work was within normal limits; blood will also be sent to an outside laboratory for aspergillosis testing.

Dr. Ernesto and veterinary technician Jaclyn test-flew the eaglet in A3 again and found that the bird did not want to fly and stayed on the ground. Dr. Ernesto is carefully observing the bird via Critter Cam today; there is no clear clinical explanation of why this bird is not flying well.

With this latest development, plans for the release of #18-1139, including outfitting with a transmitter, have been put on hold. 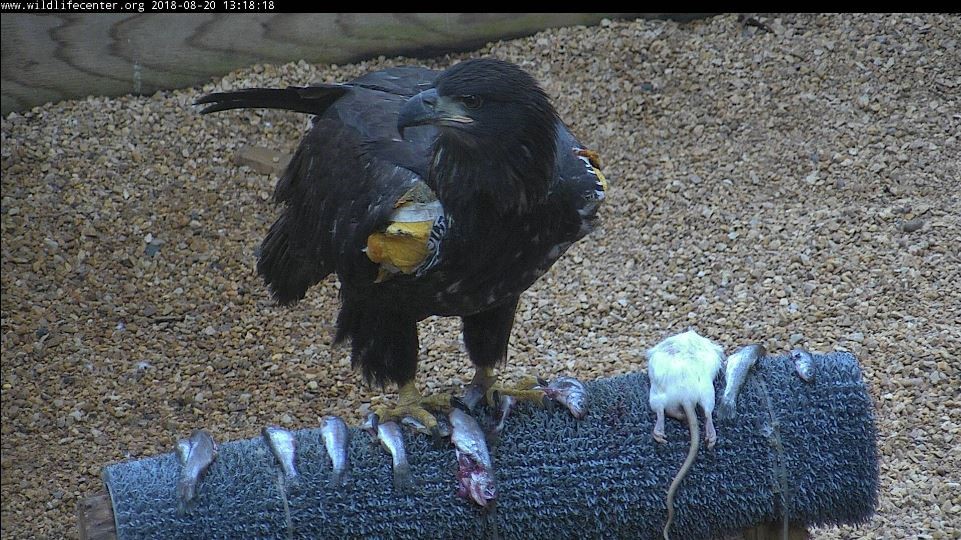 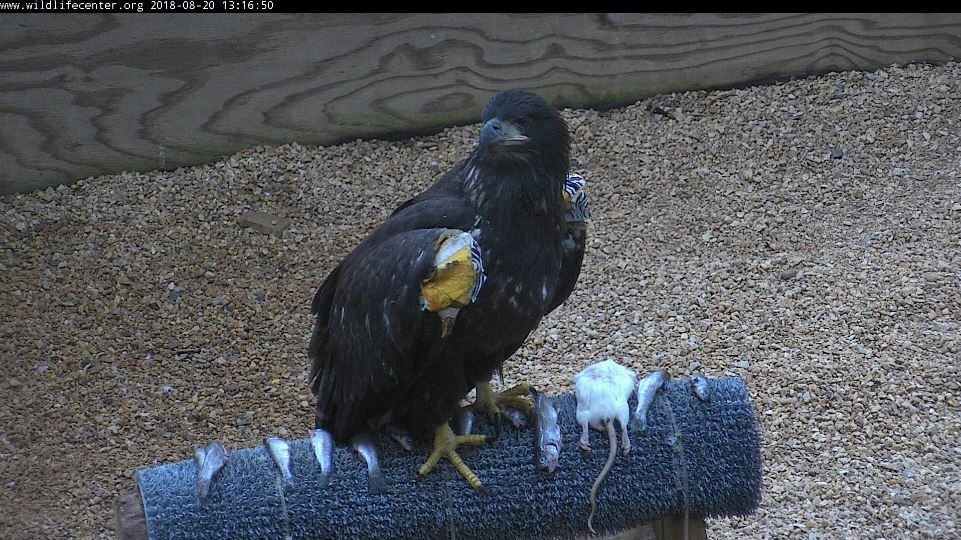 Eagle biologist Jeff Cooper will be at the Wildlife Center during the week of August 20 to assist wildlife rehabilitator Brie with fitting a GPS transmitter on Bald Eaglet #18-1139 prior to release. Brie is learning about the fitting process; once she’s fully trained, she can place any available GPS backpacks on her own.

In the meantime, daily exercise continues for the young bird; the staff report that the eaglet is flying 15 or more passes in the A3 flight pen.

Bald Eaglet #18-1139 has been flying well during the past week; the young eagle has gained more stamina, and while he’s a little stubborn during some exercise sessions, the quality of his flight is good. The rehab team is now able to get the eagle to fly about 15 times perch-to-perch during each exercises session.

Wildlife rehabilitator Brie reached out to state eagle biologist Jeff Cooper about the possibility of a GPS transmitter; Jeff has a unit for the eaglet, and just needs to coordinate an appropriate date for fitting the unit on the eaglet as he gets close to release.

Bald Eagle #18-1139 is flying an average of five to 10 passes during each daily exercise session. The rehab team reports that the bird is inconsistent with flight; some days the eaglet is able to fly 10 or more passes with good stamina and strong flight, but on other days, the eaglet is not as adept at maneuvering in the flight space. It’s likely that the young bird just needs additional time to practice flight. 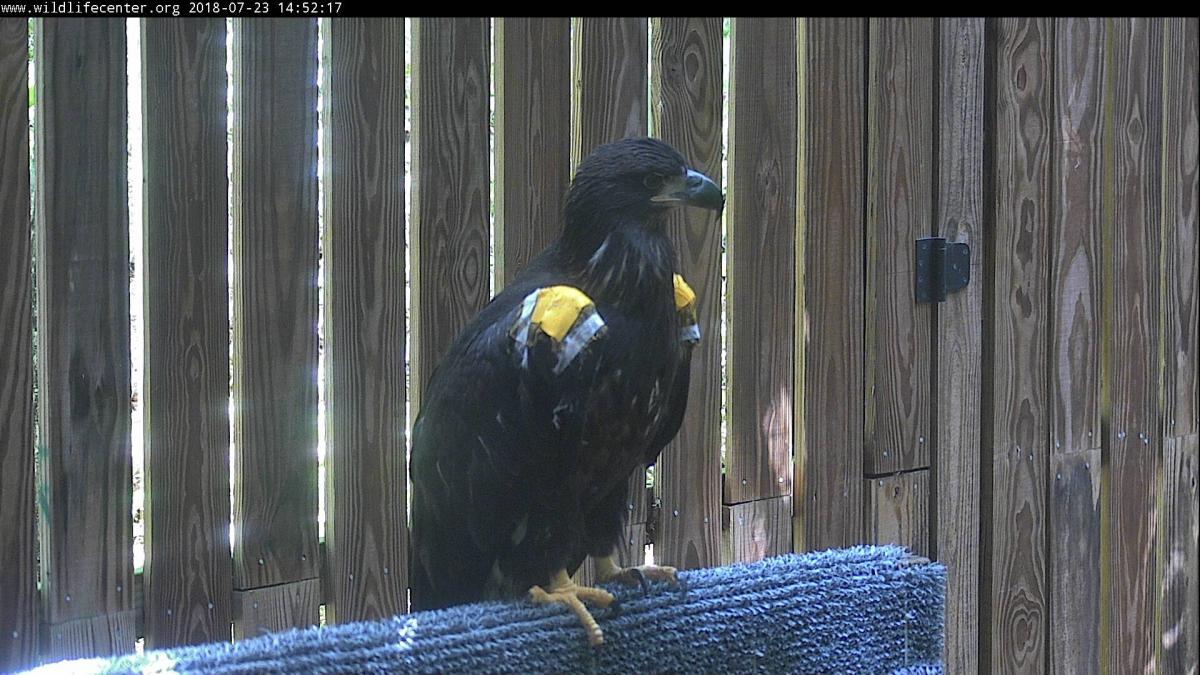 Bald Eaglet #18-1139 is doing well in flight pen A3. Wildlife rehabilitation intern Shannon reports that the eaglet has been flying an average of four to six passes during each exercise session and that the bird’s stamina is improving week to week. The rehab staff will aim to have the eagle fly an average of five to 10 passes during exercise during the coming week.

Bald Eaglet #18-1139 has been doing well in flight pen A3 during the past couple of weeks. The eagle’s weight is stable, and the bird has been making a few flights around the large flight area. On July 5, the rehabilitation team began a formal daily exercise program for the young bird, to slowly build his stamina during the next month. If all goes well, the young bird could be released sometime in mid- to late August.

Since Bald Eagle #18-0752 was released on July 4, the rehab team decided the young eaglet could benefit from another adult eagle role model, so they moved Bald Eagle #18-0132 to A3.

Bald Eaglet #18-1139 has been doing well since fledging in flight pen A3; the bird is making short flights each day, and the staff have not noted any sign of a wing droop. The bird is eating well and weighs a little more than 3.0 kg. The eaglets feathers have grown in, and the veterinary staff began regularly foot and feather checks for the young bird, which will take place every other week. Once the bird is a little older, the rehab staff will start daily exercise to prepare it for release.

Bald Eaglet #18-1139 has been doing well in the tower of A3 for the past week. The eagle has been moving around and perching normally; no additional issues have been seen with the bird’s shoulder in this limited space. On June 10, additional radiographs were taken to check on the eagle’s left shoulder injury; the vet team was happy to report that the bird’s initial issues had resolved. The eaglets eyes are also within normal limits.

The rehabilitation team opened the tower doors into the main flight space of A3; this would allow the eaglet to fledge naturally on its own time. By the next morning, the eaglet had made the first jump and was seen on the ground and on several lower perches in the flight pen. The staff will continue to closely monitor the young bird as it begins making short flights. 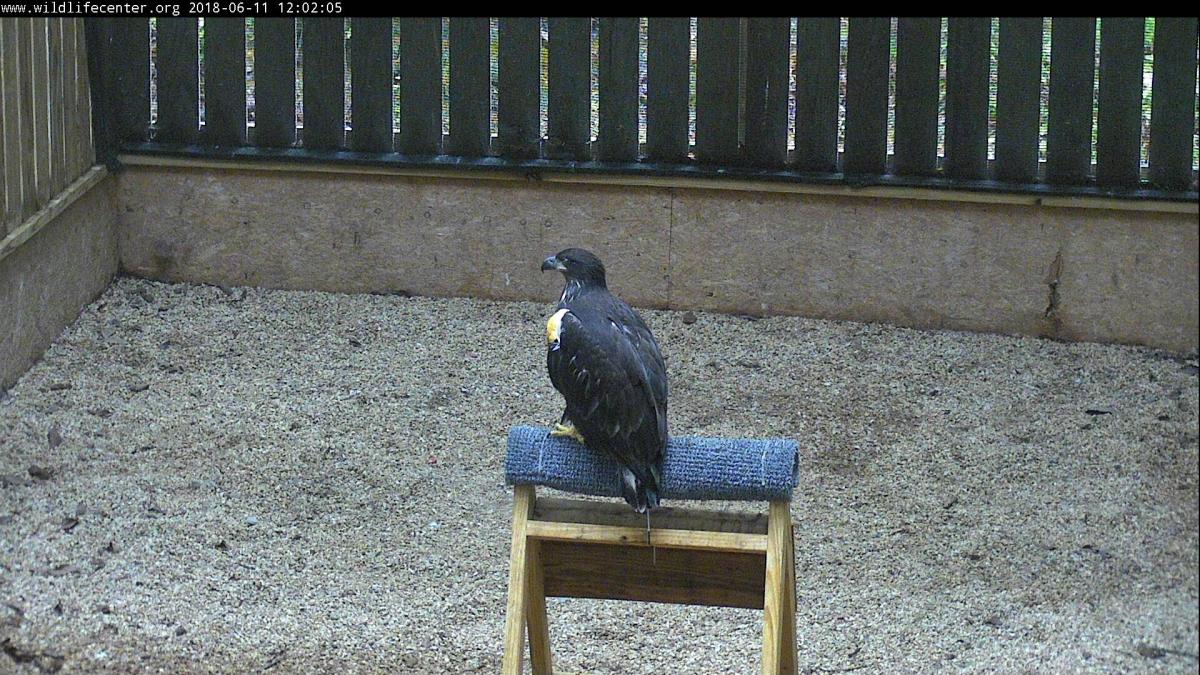 Watch for this eaglet on one of the Center's Critter Cams!

During the past week, Bald Eagle #18-1139 has been doing well, and no wing droop has been noted since a few days following admission.

The bird has been eating well and was transitioned to a diet of whole mice [instead of a plate of chopped rat].

At this time, the staff is monitoring the eagle’s activity in the tower and reports that the bird has been moving from the nest structure to an a-frame perch. Rehabilitator Brie believes the bird will soon be ready to branch out into the larger space. Before this is allowed, however, the veterinary team will need to assess the eagle’s left shoulder; recheck radiographs will be scheduled for later this week.