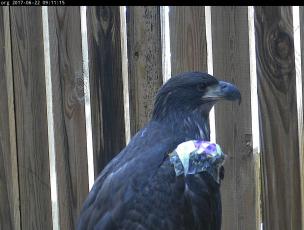 On May 27, a citizen in Alexandria, Virginia, found a fledgling Bald Eagle down on the ground. The eagle was taken to a local veterinary clinic before it was transported to the Wildlife Center the following day.

Dr. Peach examined the young eagle upon admission; the eaglet was bright and alert, and lying down in its transport crate. There were no significant findings on physical exam, though Dr. Peach noted that the bird was slightly thin, and had many blood feathers growing in. Blood work, including a lead test, was within normal limits. Dr. Peach gave the young eagle fluids before setting it up in a crate in the Center's holding room.

The bird is younger than the two other Bald Eaglets currently in care; the young eaglet was moved to flight pen A3, but will live in a crate for a few days so that the staff can ensure the eaglet gets its fair share of food. It's likely that the bird will be moved to the tower within the next few days, where it will have the lofted space to itself, where it can observe the other two eaglets and two adults.

Your donation will help provide care to this growing eaglet -- and the 2,500 other patients the Wildlife Center will treat this year.

Photo of MN72 by Claudia Moore 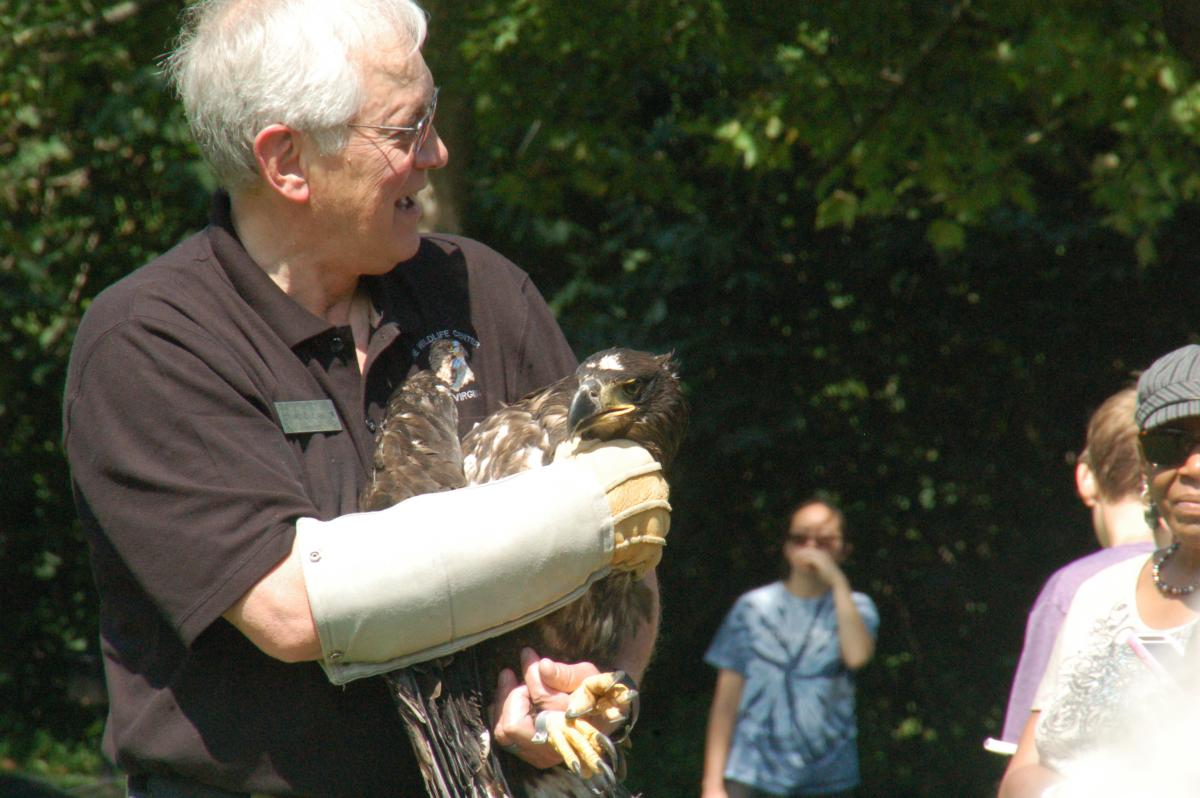 Photo of Ed and MN18 by Alex Huneycutt 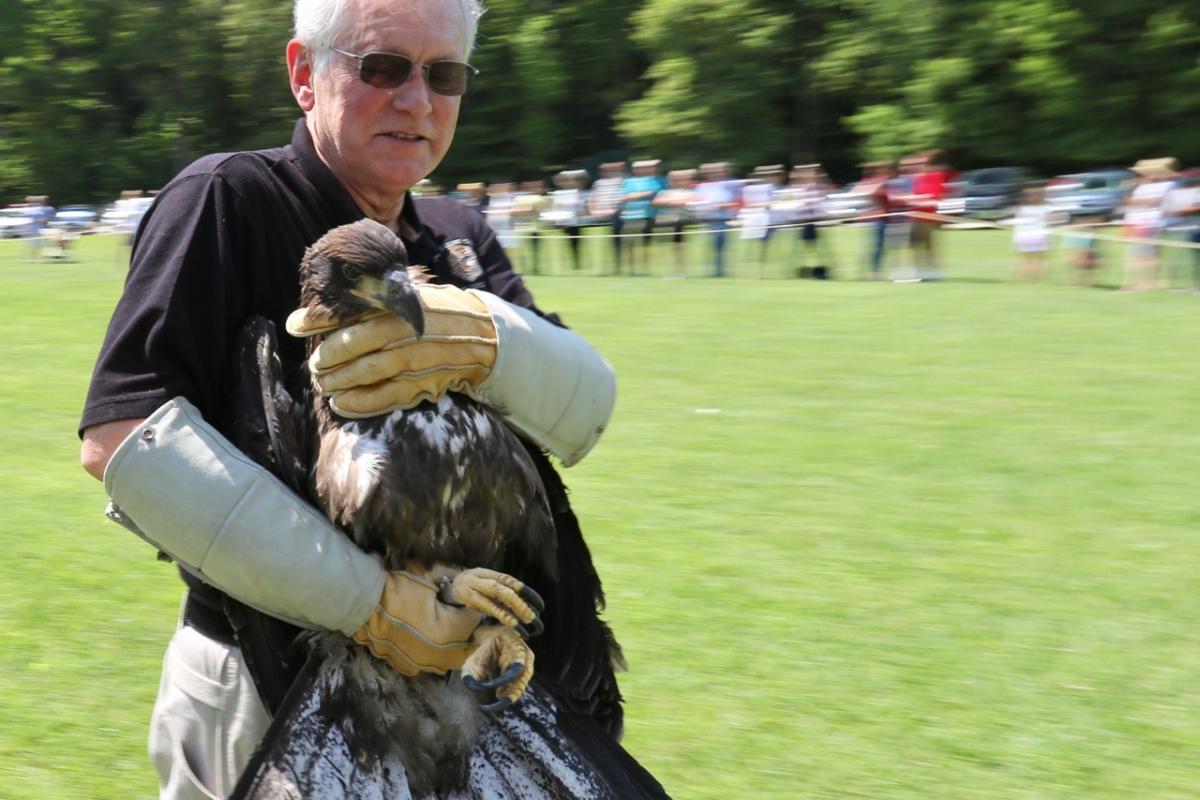 Photo of Ed and MN18 by Cheryl Kirk: 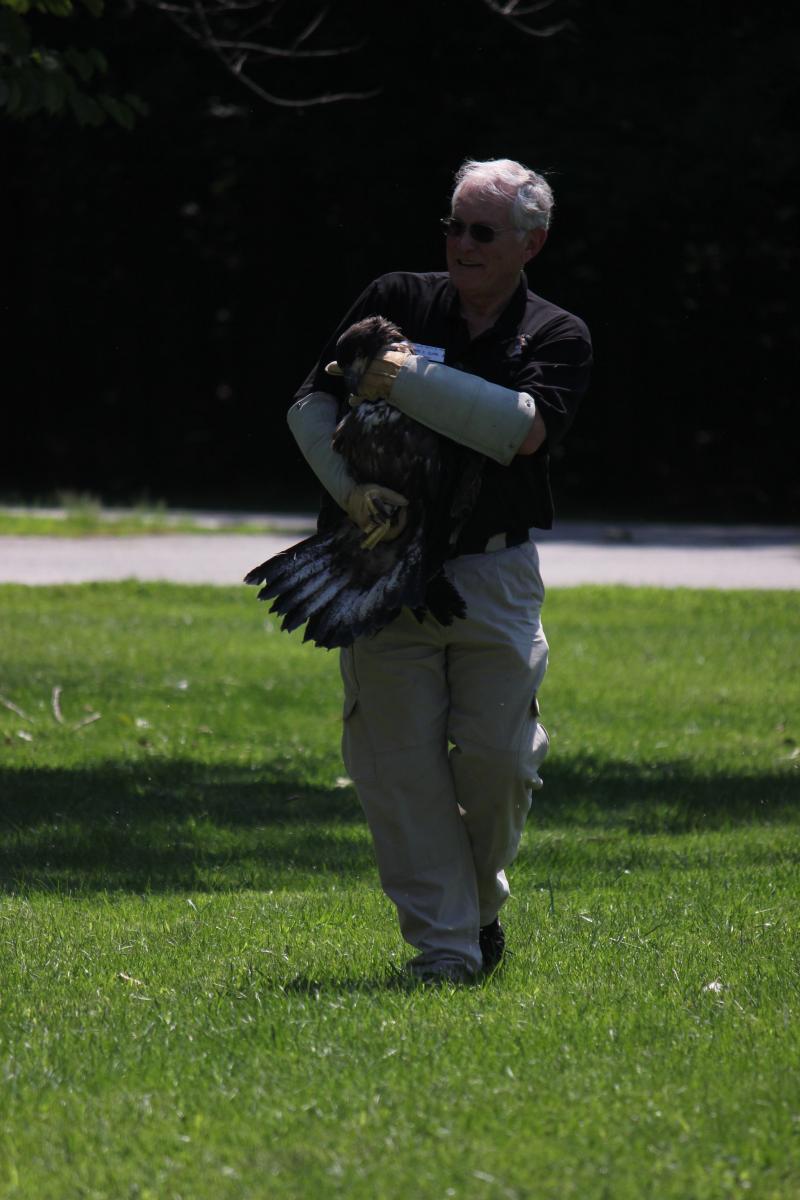 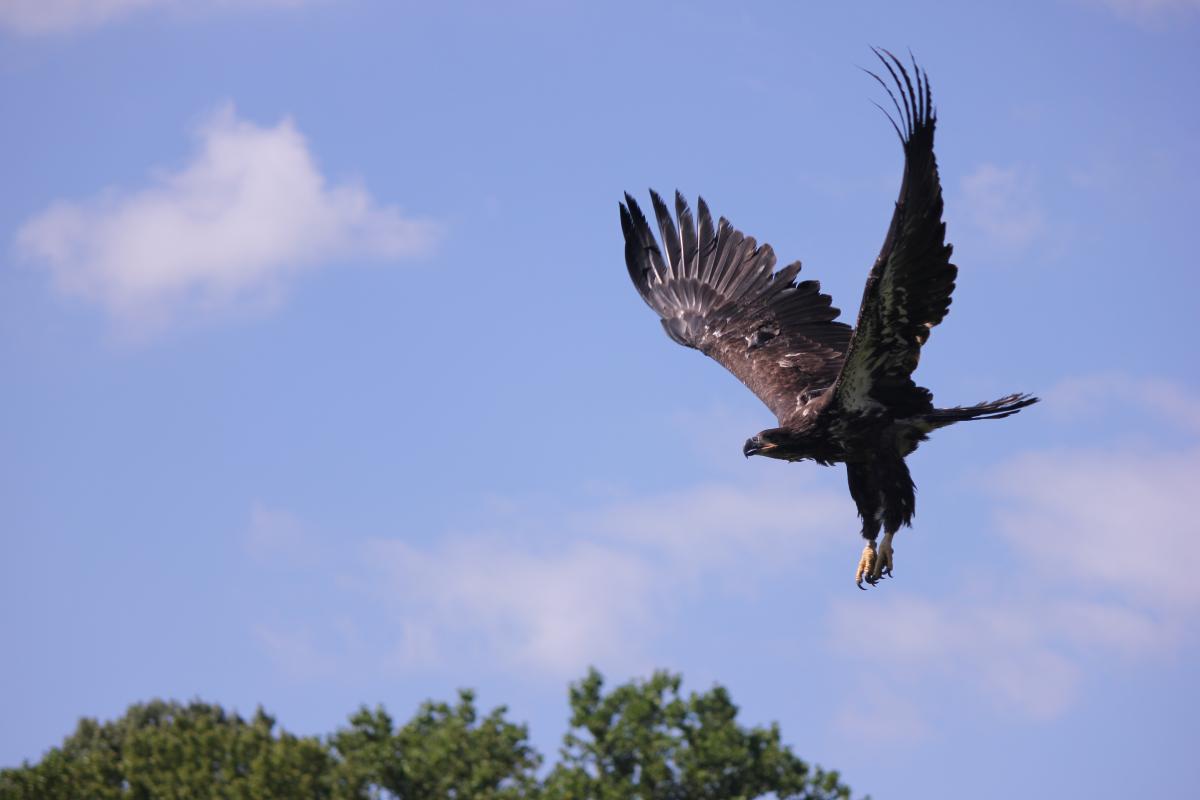 Stay tuned to the Eagle Tracking to see where these birds go post-release!

On August 15, eagle biologist Jeff Cooper came to the Wildlife Center to fit GPS transmitters on eaglets #17-0836 and #17-1181, which will track their movements after release. The birds were also banded and had blood drawn for pre-release blood work; results came back within normal limits. Wildlife rehabilitator Brie checked on the eaglets later that day; both were flying well with their new transmitters, so the team began planning a release!

Wildlife Center President Ed Clark will release the two Bald Eagles on Saturday, August 19 at 11:00 a.m. at the Mason Neck State Park Visitors Center in Fairfax County. The release is free and open to the public; those attending are asked to RSVP to lkegley@wildlifecenter.org.

The GPS transmitters will enable the birds to be part of an ongoing research study that will monitor eagle movements. This study looks at the data received from these tracked Bald Eagles to determine the range and behavior of Bald Eagles in Virginia’s coastal plain. Migratory behavior is studied as biologists are able to see how far Bald Eagles move in the winter season, and the data will play an important role in modeling how these birds use airspace. By looking at heights at which the eagles fly, average distances, and other specifics, biologists are able to relate this eagle behavior to real-life issues, such as airstrike data.

For the Wildlife Center, this is a fantastic opportunity for additional post-release studies of our rehabilitated raptors. There have been very few studies done in this area. The Wildlife Center will be able to see and share GPS data; the bird will be added to the Eagle Tracking page on our website. After release, eagle #17-0836 will be known as MN18 and eagle #17-1181 will be known as MN72, for tracking purposes. 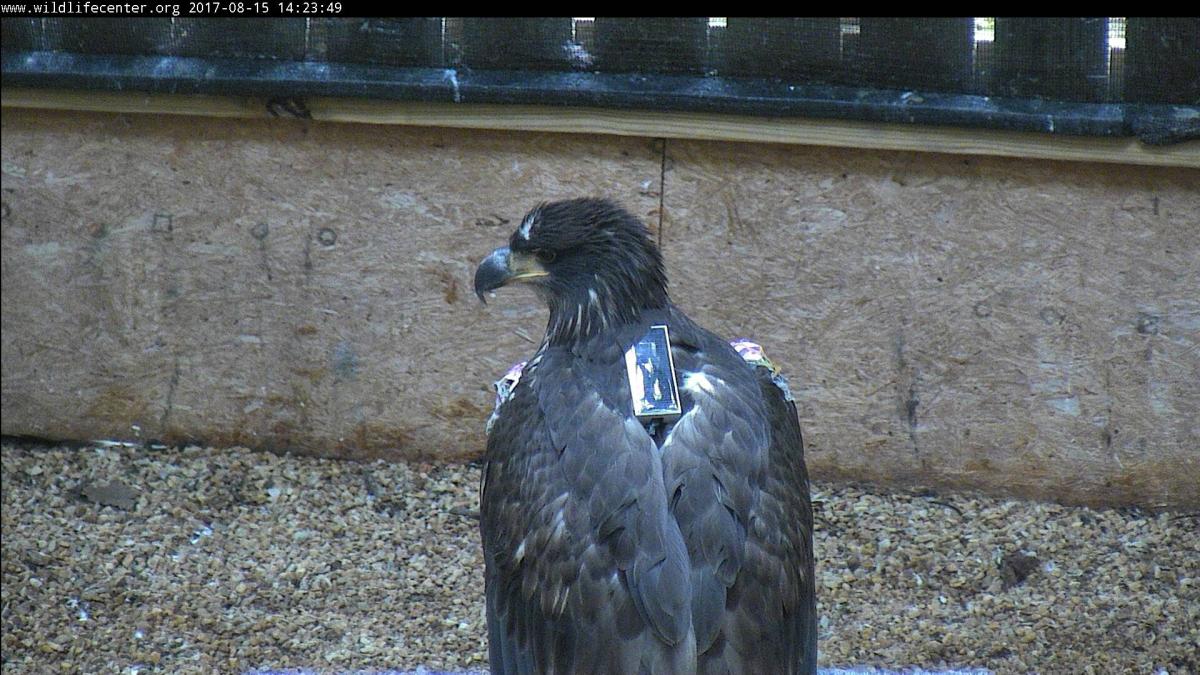 Bald Eagles #17-1181 and #17-0836 continue to fly well during their daily exercise session. Wildlife rehabilitator Brie got in touch with the state eagle biologist; he does have GPS transmitters for these birds and will be at the Center to fit the birds during the week of August 14. After the “backpack” fitting, the birds will be returned to their flight enclosure for additional exercise and observation.

Bald Eaglets #17-1181 [cupcake bumpers] and #17-0836 [green bumpers] have been flying very well during exercise sessions and were bumped up to a goal of 15+ passes during each exercise session this week. This is the “optimum” level for this species in this particular flight space; as long as the eaglets continue to do well during the next couple of weeks, release could be considered. The staff are contacting the state eagle biologist to inquire about GPS transmitters.

Bald Eaglet #17-0879 has been the weakest flyer of the three, and, within the past week, has been displaying a slight wing droop. The team decided to move the bird to a different flight space to continue exercise; this will allow the two other eaglets to fully prepare for release.

The three young Bald Eagles in A3 have been exercising well during the past week; wildlife rehabilitator Brie notes that eagle #17-0836 [Green bumpers] is still the strongest flier of the bunch, and typically flies eight to 11 passes during each exercise session. The other two are doing well, but need to improve their stamina. All of the eagles will have their daily goal increased to 10-15 passes during each session.

The three Bald Eaglets in A3 are exercising well; wildlife rehabilitator Brie reports that eaglet #17-0836 [green bumpers] is the strongest flier out of the three. Each eaglet has been consistently flying about five to six passes; this week, the eaglets will be pushed to five to 10 passes. Once they are consistently flying at 15+ passes during each session, release will be considered. Dr. Ernesto is getting in touch with the state eagle biologist to see if he has extra GPS transmitters for any of the eaglets.

On Wednesday, the rehabilitation team moved Bald Eaglet #17-1354 to flight pen A2, to share an enclosure with Bald Eagle #17-0968. The remaining three eaglets in A3 began exercise on Wednesday; the team will carefully monitor the birds to make sure all three young eagles can successfully exercise in the same space. Current wing bumper identifications are:

The eagle family in A3 is doing well; the young eaglets are all exploring their space and are able to fly the length of the flight enclosure. Dr. Ernesto and wildlife rehabilitator Brie will soon make a plan to begin splitting up the eaglets so that they can be safely exercised in flight pens; six eagles in a pen is too many to safely exercise. To start with, the two non-releasable mature eagles were moved to flight pen A1.

Each eaglet will need to be flight-conditioned; the rehab team will assess the bird’s altitude during flight, maneuverability, and stamina. It will likely be several weeks before the young birds are conditioned enough for release. Because eagles rely heavily on scavenging (in addition to catching fresh fish) live prey testing is not offered for Bald Eagles at the Wildlife Center.

The eagle family in flight pen A3 is doing well; earlier this week, the wildlife rehabilitation staff opened the tower doors to allow #17-1354 to fledge. The young bird left the tower sometime later that night or early the next morning.

At this point, the eagles are exploring the flight enclosure and are growing up; they aren't yet being exercised, but will likely be split up when it's time to begin. Critter Cam viewers can identify the eaglets by the color of their protective wing bumpers; eaglet #17-0836 has green bumpers, eaglet #17-0879 has "gnome" bumpers (gray background color), eaglet #17-1181 has "cupcake" bumpers (purple in color), and eaglet #17-1354 has stripe bumpers. 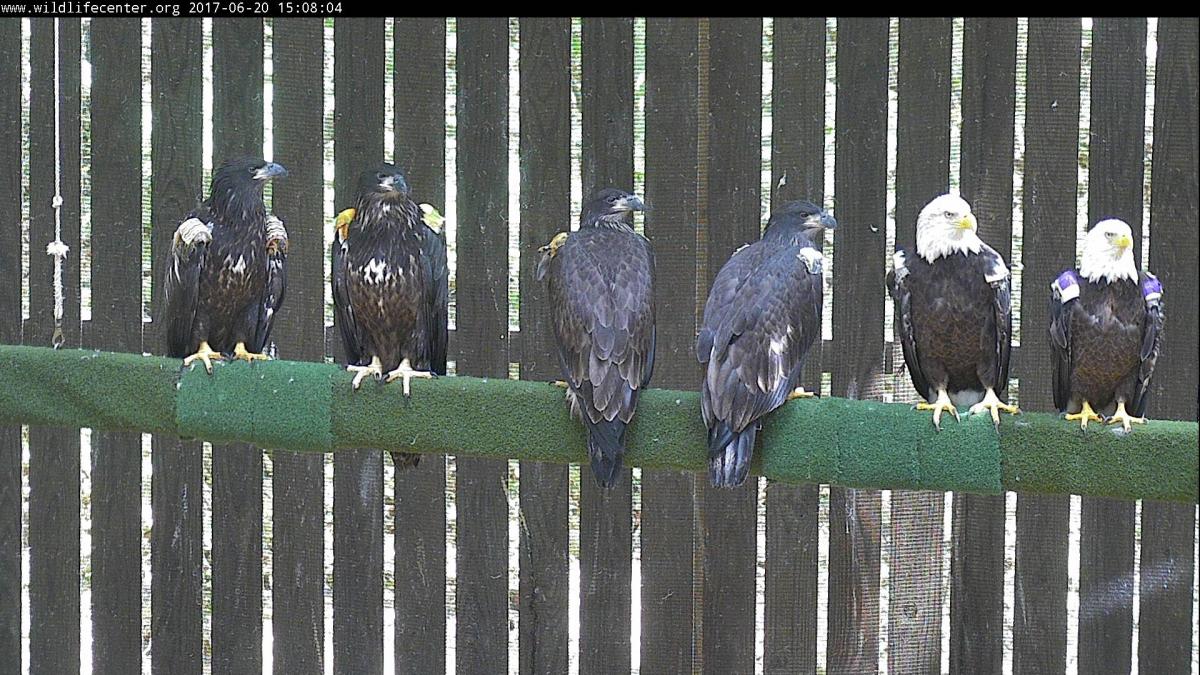 On June 6, wildlife rehabilitator Brie opened up the doors of the tower in flight pen A3 to allow Bald Eagle #17-1181 to fledge. The young eagle hung out in the nest for most of the day, then moved to the railing for a few hours before officially fledging that evening.

Critter Cam viewers can identify the eaglets by the color of their protective wing bumpers; eaglet #17-0836 has green bumpers, eaglet #17-0879 has "gnome" bumpers (gray background color), and eaglet #17-1181 has "cupcake" bumpers (purple in color).

The eaglets are eating well and gaining weight. The veterinary team has not yet measured the eagles to determine gender. Based on weight and cam observations, it's likely that the newest eaglet is a male, and the green-bumpered eaglet is a female. 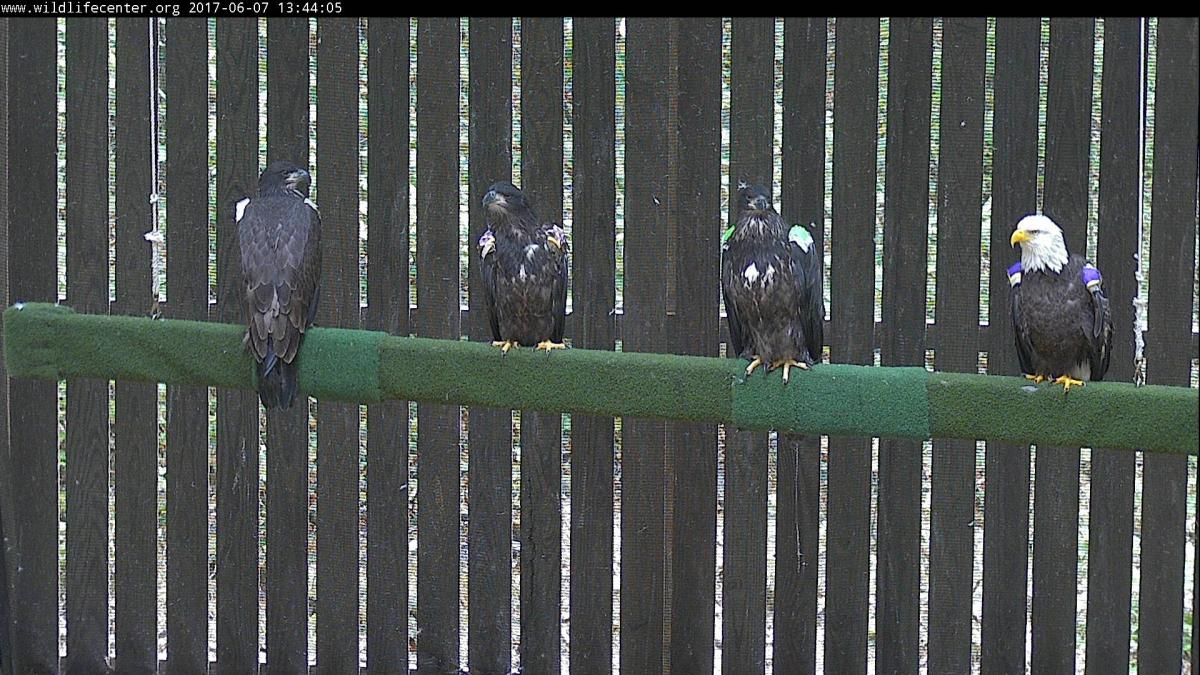