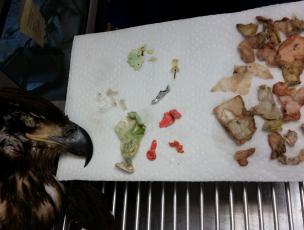 On the evening of June 26, a hatch-year Bald Eagle was found down on the ground at the Naval Weapons Station in Yorktown, Virginia. The bird was captured and taken to a nearby permitted wildlife rehabilitator. The rehabilitator found that the young eagle had a wing fracture; she stabilized the eagle’s wing and arranged transport for the following day.

Dr. Meghan Feeney, the Center’s veterinary intern, examined the Bald Eagle when it arrived. The bird was laying down in its transport enclosure, and appeared to be very dull and weak. Dr. Meghan was able to palpate the left humeral fracture in the bird’s wing, which extended to the bird’s elbow joint. The bird was very thin. Blood samples were taken, which revealed lead toxicity at a level of .616 ppm – a high level which indicated a grave prognosis.

The eagle was radiographed; Dr. Meghan was able to see a long, oblique fracture of the bird’s left humerus, which extended to the eagle’s elbow joint. Dr. Meghan was surprised to find numerous foreign bodies present in the eagle’s ventriculus, the part of the bird’s digestive tract where digestion takes place. Two items appeared to be made of metal, while the rest of the foreign bodies were more opaque. 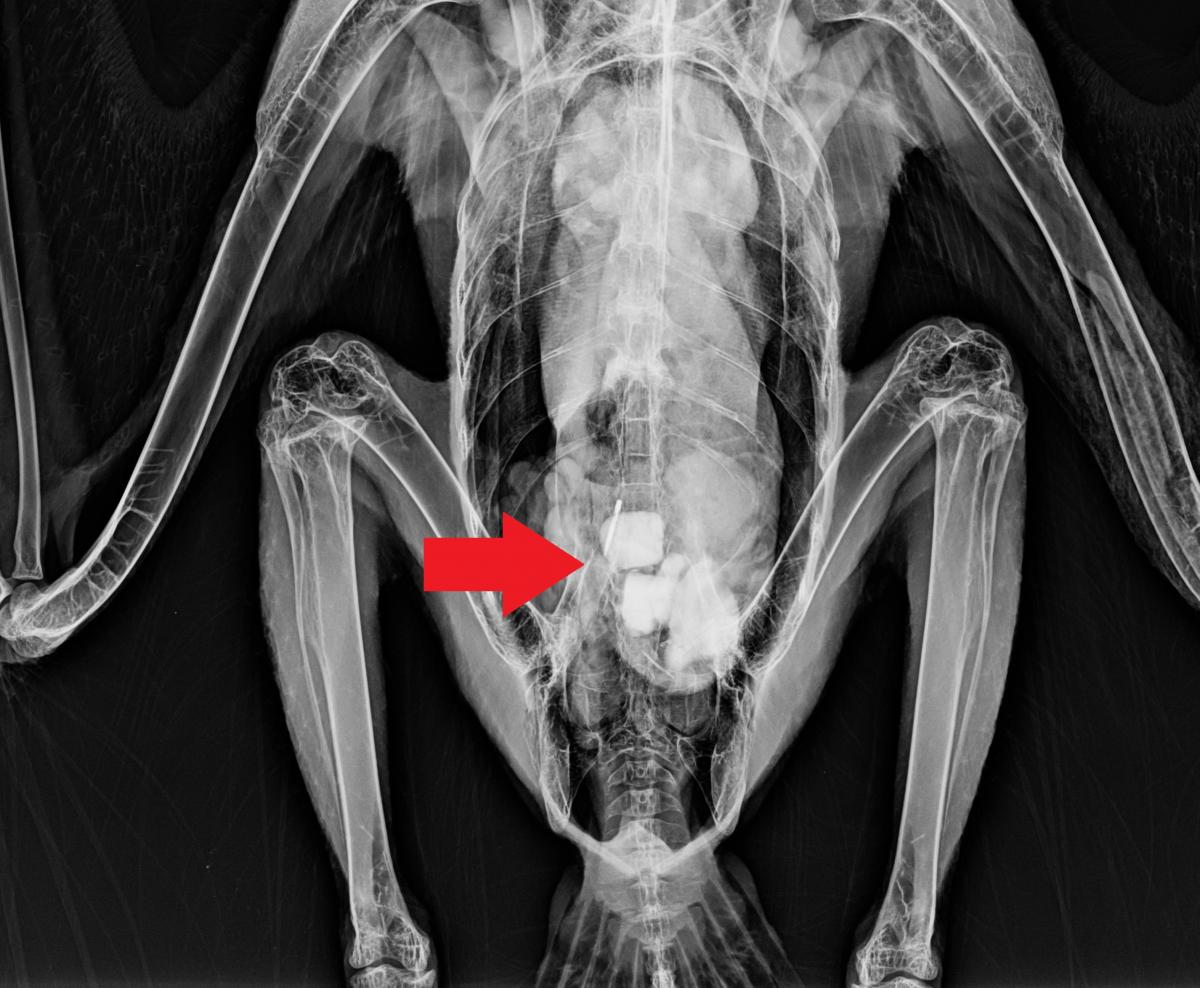 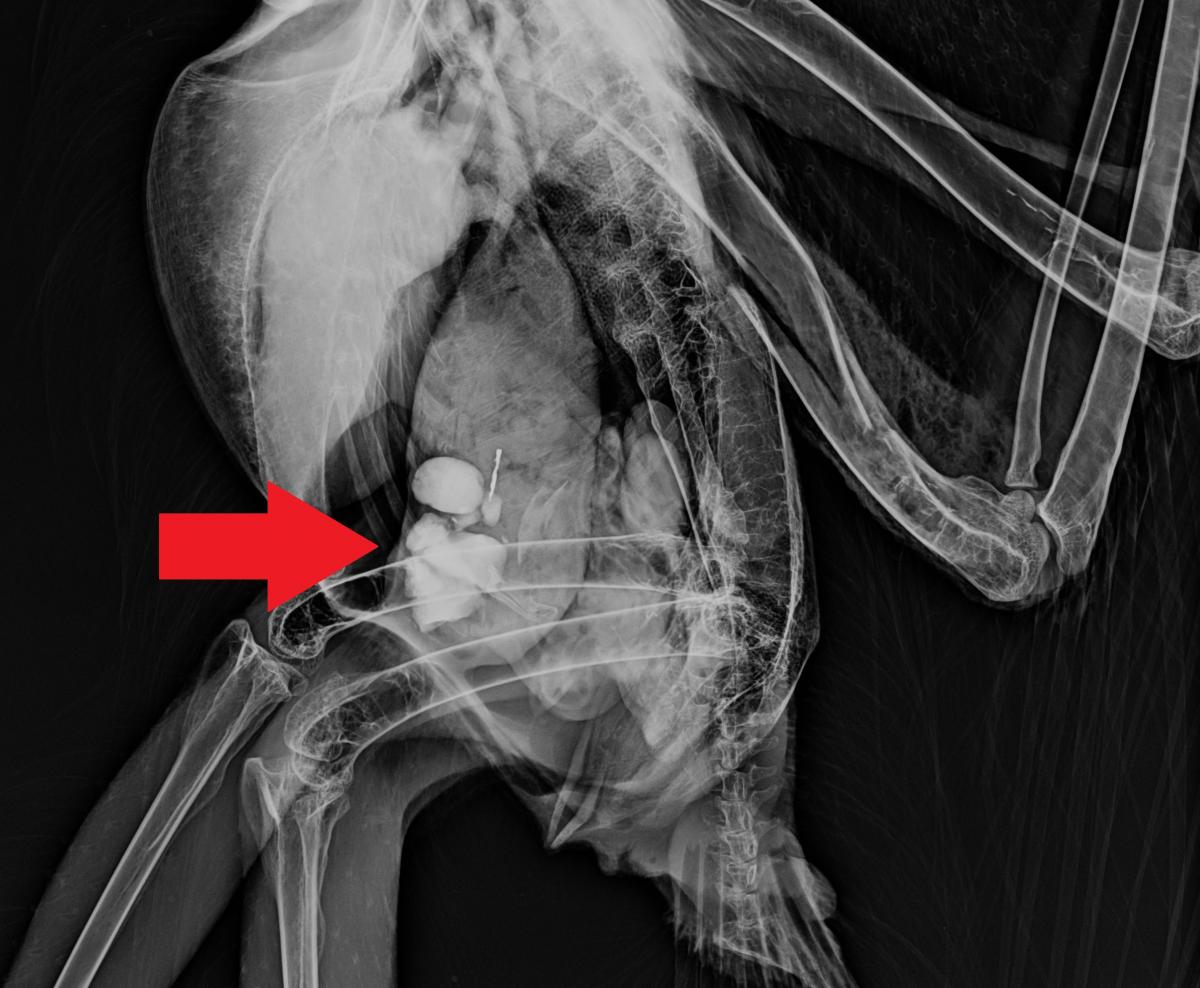 Given the severity of the eagle’s injury and its poor condition, Dr. Meghan humanely euthanized the bird. A necropsy was performed and the foreign bodies were extracted from the eagle’s ventriculus. The items included: two balloons, several pieces of cardboard/paper, an aluminum soda can tab, a thumb tack, plastic particles, plastic wrapper material, and one more unidentifiable item. 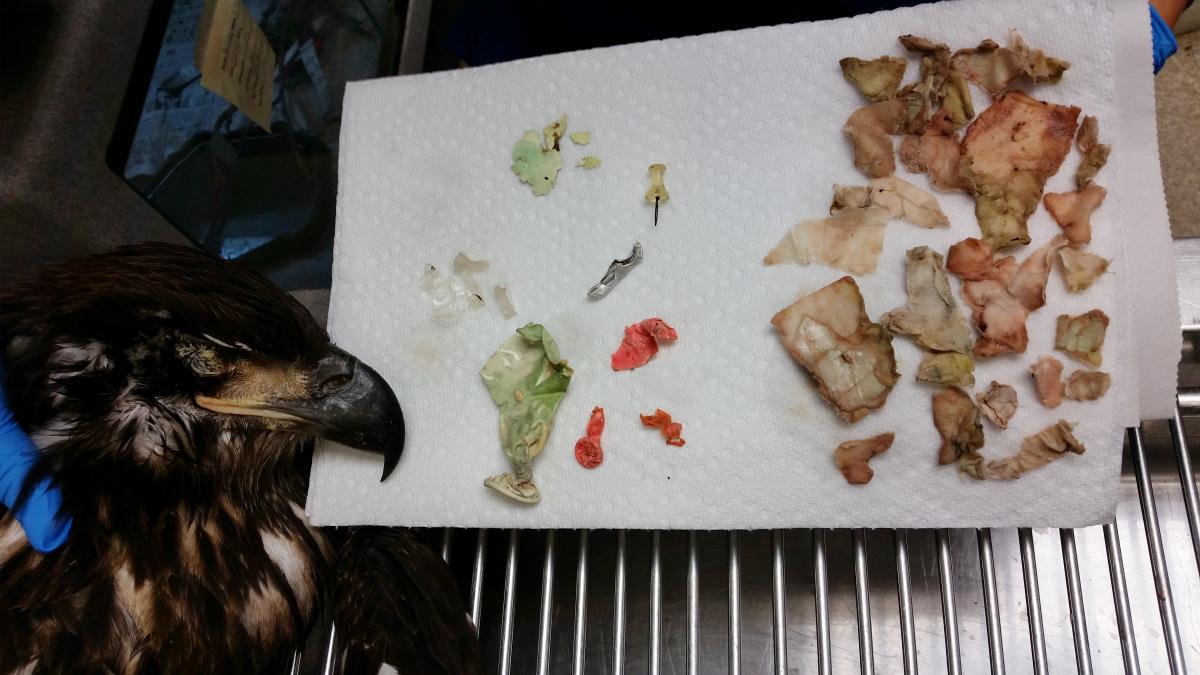 It’s difficult to know how or why the eagle ingested these items; we also don't know the sequence of events that occurred. Eagles are scavengers; the young bird may have eaten the indigestible trash on its own. The eagle also may have eaten a fish, duck, or turtle that had ingested the trash; the prey item would’ve been digested, leaving behind the numerous foreign bodies. Dr. Dave McRuer, the Center’s veterinary director, is looking into additional testing to learn more about the items found in the eagle.

This young Bald Eagle’s story is an important reminder that litter can impact all kinds of wildlife. Dispose of trash properly, and never release balloons into the environment. Released balloons inevitably come down as litter, which can be ingested by or entangled around many species of wild animals.

Your special donation helps us fulfill our mission: teaching the world to care about and to care for wildlife and the environment.