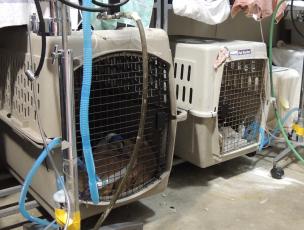 On November 15, two mature Bald Eagles were found down on the ground, next to a deer carcass. The birds were unable to stand and were exhibiting neurologic symptoms -- indicating possible poisoning. The birds were triaged by a permitted wildlife rehabilitator and driven to the Wildlife Center that same day.

The eagles -- #16-2439 and #16-2440 -- were both in grave condition at admission. Based on their symptoms and the history, Dr. Ernesto suspected poisoning. Dr. Ernesto took blood samples, and started both eagles on intravenous fluids and oxygen therapy. Bald Eagle #16-2439's lead tests came back positive at a level of 0.292 ppm; Bald Eagle #16-2440's lead tests revealed a level of 0.295 ppm. Dr. Ernesto began chelation therapy, to remove the lead from the birds' blood. Blood and samples of the food from the birds' crops were sent to an outside laboratory to test for additional toxins that he suspected may have been ingested. 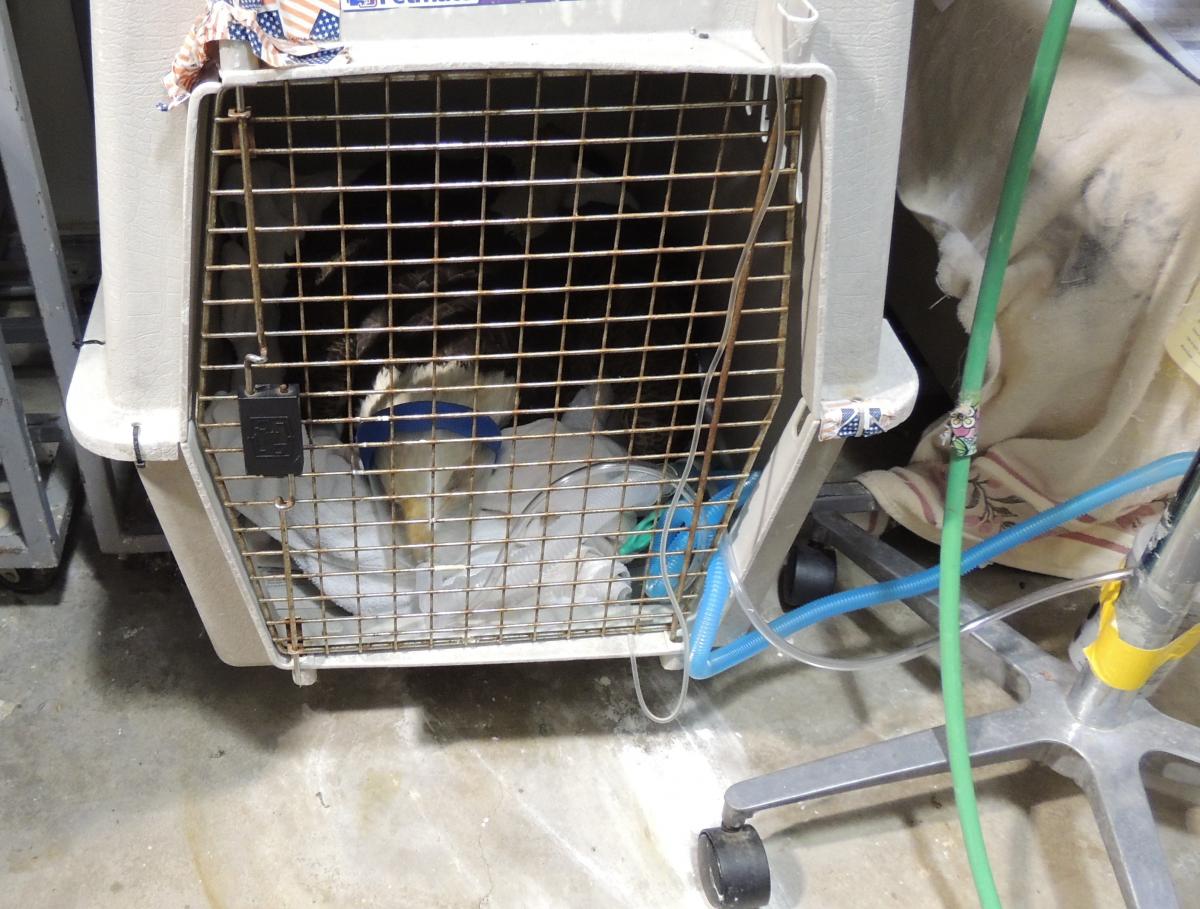 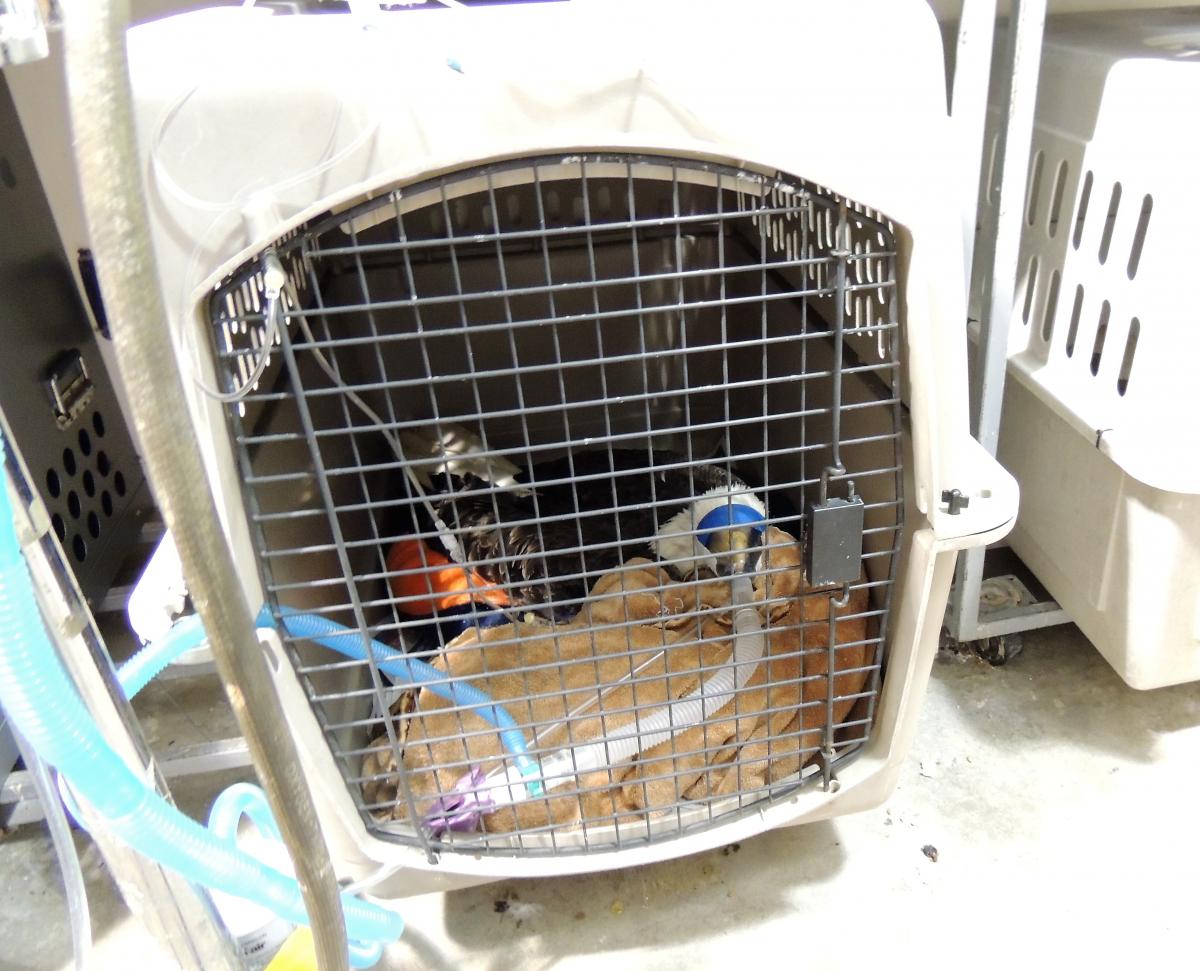 The following morning, Dr. Ernesto was thrilled to find both eagles still alive. Both birds were started on sodium bicarbonate, to neutralize the effects of the suspected ingested poison. The birds continued to receive IV fluids and oxygen therapy.

Two days after admission, both birds were standing, and were more bright and alert. The supplemental oxygen was discontinued, but Dr. Ernesto continued to provide fluids to flush the suspected poison from the eagles' systems. Neither bird was interested in eating; both had to be force-fed to receive adequate nutrition.

On November 26, the birds were eating on their own and ready to move to a small outdoor flight pen; two days later they were moved to flight pen A1. Both birds are flying well, and the Wildlife Center team hopes that both will be able to be release this year.

Dr. Dave, the Center's veterinary director, received laboratory results on November 29. The results confirmed the presence of pentobarbital, a drug mainly used by veterinarians to euthanize animals. Sadly, secondary pentobarbital poisoning of wildlife occurs when euthanized animals are not properly disposed; in many cases, this has led to the deaths of wild, scavenging birds like Bald Eagles.

Your special donation will help the Center to provide specialized veterinary medical care to these poisoned Bald Eagles … and all of the patients admitted in 2016. Please help!

Sadly, Bald Eagle #16-2440's carpal injuries did not heal during the past two weeks of treatment. The bird continued to be a very high-stress patient in captivity, which can be a challenge in the rehabilitation process.

Five days after Dr. Peach surgically debrided the eagle's wounds, Dr. Ernesto found that the wounds had opened again and debrided the injury site for a second time. A week later, the bandages were removed; the wounds had not healed at all, and radiographs confirmed additional issues with the bones of the "wrist" joint.

After prolonged treatment with no success, Drs. Ernesto and Peach made the difficult decision to humanely euthanize the eagle.

Bald Eagle #16-2440 was examined on December 21 so that Dr. Peach could determine if the bird was able to begin exercise again, after the bird's self-inflicted wing injury. Unfortunately, the bird's wing injury had not improved; the joint was swollen and radiographs indicated some remodeling of the bone. Dr. Peach performed a fine needle aspirate on the swollen area and found blood, some joint fluid, some inflammatory cells, but fortunately, no bacteria. There was also a large scab on the leading edge of the eagle's carpus; Dr. Peach removed the scab and found inflamed tissue as well as bone.

The eagle started on a course of aggressive antibiotics to prevent the development of bone infection. On December 22, Dr. Peach will anesthetize the eagle and will surgically debride some of the tissue. She'll also implant several antibiotic-impregnated beads in the wound to promote healing. The bird's prognosis is guarded.

Bald Eagle #16-2439 was successfully released on December 21 at York River State Park. About 200 people attended the release. Wildlife Center President Ed Clark was present; after Ed got the eagle out of his transport crate, he passed the bird to Dr. Ernesto for the honor of the release. The eagle flew off beautifully. 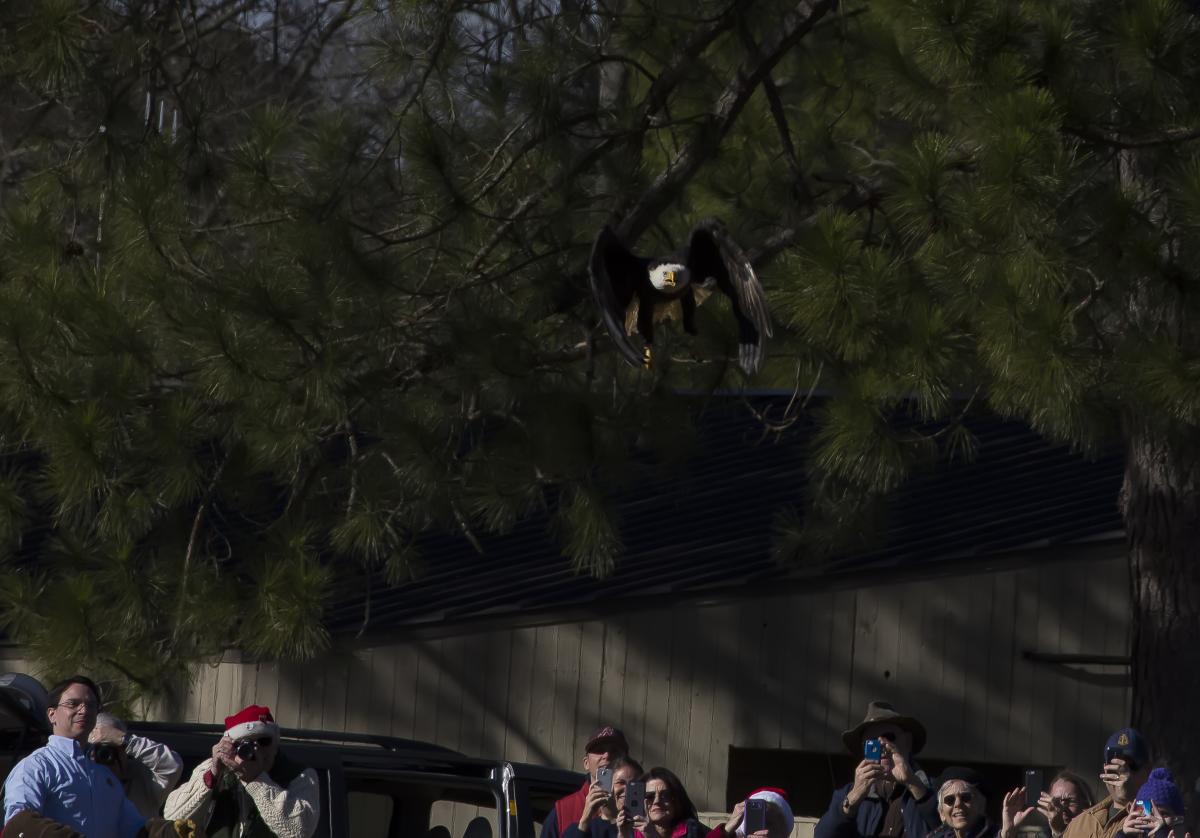 Video from The Virginian-Pilot:

Eagle Release in the News:

On December 16, the veterinary team evaluated eagles #16-2439 and 16-2440. Bald Eagle #16-2440 had a slight wing droop; Dr. Peach examined the bird and found some soft tissue swelling on the right carpus [wrist], likely from hitting a wall during flight. Dr. Peach padded the eagle's carpus and administered anti-inflammatories; the eagle's stamina is not appropriate for release yet, and the eagle was returned to A1.

Blood was drawn from Bald Eagle #16-2439; results came back within normal limits and the eagle was cleared for release.

Bald Eagle #16-2439 will be released on Wednesday, December 21 at York River State Park at noon. The release is open to the public; the park is waiving the entrance fee for release participants. Attendees are asked to RSVP to Lacy Kegley at lkegley@wildlifecenter.org. 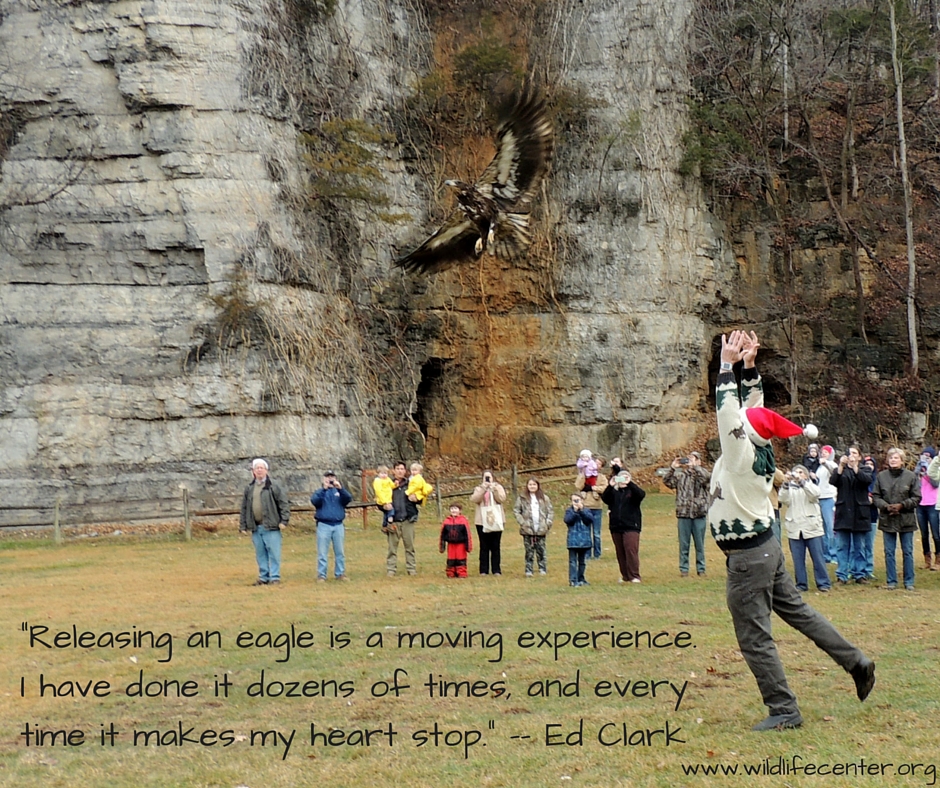 Both Bald Eagles recovering from secondary pentobarbital poisoning are doing well in flight pen A1. Both birds are now flying about 15-16 passes during each exercise session, though Bald Eagle #16-2439 has stronger flight and better stamina. The veterinary team did note that eagle #16-2440 was wheezing and more trouble breathing at admission; it's likely that the eagle may require more time to build up stamina.

The veterinary team will plan on drawing blood from eagle #16-2439 for a pre-release analysis in the next few days.