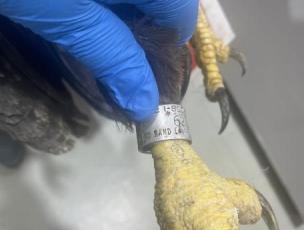 On December 20, a private citizen found an adult Bald Eagle in the woods behind Rappahannock Community College in Saluda, VA. During the next two days, the citizen noticed that the eagle remained on the ground and did not seem able to fly. Concerned for the eagle’s well-being, they contacted Julie Wobig of Tidewater Wildlife Rescue. Julie captured the eagle later that night and took it to permitted wildlife rehabber Deb Woodward. The eagle was transferred to the Wildlife Center the following day.

On admission, the eagle (likely a male) was alert and responsive. Center veterinary intern Dr. Jenn examined the bird and found that he was very thin, dehydrated, and had a large open wound under his right wing. She also noticed that the eagle’s right leg had a decreased range of motion at the hip. Radiographs revealed bony changes in the eagle’s right hip joint, likely caused by an old injury. No other notable injuries were found. Dr. Jenn then ran an in-house lead test that came back with a positive reading of 0.103 ppm, a subclinical level.

The exam also revealed a federal US Fish and Wildlife Service band on the eagle’s left leg. Dr. Karra, the Center’s Director of Veterinary Services, reported the band number to the federal banding lab and learned that the eagle hatched in Newport News in 2013, making him almost nine years old.

After the exam, Dr. Jenn cleaned and bandaged the eagle’s wound. She started the eagle on a course of pain medication, anti-inflammatories, antibiotics, and fluids. She also started him on a joint supplement to alleviate potential arthritis in his right hip joint, and once the eagle’s dehydration was corrected, she started chelation therapy to remove his lead. Dr. Jenn then placed the eagle in the Center’s indoor holding area for rest and close monitoring.

On December 28, veterinary staff anesthetized the eagle to surgically debride the wound under his right wing and suture it closed. In addition to the medication, veterinary staff applied ice packs and used laser therapy to aid in the wounds healing process. So far, the wound is healing nicely and has not shown any signs of infection.

For now, the eagle will remain in hold where it will receive daily treatment from the veterinary team. His prognosis is poor due to potential joint issues at his right hip.

A week after this bird's admission, another banded Bald Eagle was admitted to the Center after it was found injured in Williamsburg, Virginia. Sadly, this eagle did not survive its injuries, but information from the banding lab revealed that the eagle was also banded in Newport News in May 2013, at the same GPS coordinates, likely indicating that these two birds are siblings.

Your donation will help provide veterinary care to this injured Bald Eagle ... and more than 3,500 wild patients in need this year. Thank you!

During the past two months, the veterinary team continued to treat Bald Eagle #21-3792 with a combination of pain medication, antibiotics, anti-inflammatories, and various methods of therapy to help its wounds heal. Although the fracture and wound on its left wing appeared to be healing well, in late February the rehabilitation team noticed that the eagle developed a left-wing droop. The wing droop did not improve with treatment and rehabilitation staff observed the eagle having difficulty gaining lift off the ground.

On March 14, the veterinary team anesthetized the eagle to palpate the elbow on its left wing and found evidence of a radius luxation (dislocation). Unfortunately, luxations are a type of injury that rarely heal properly and there is no form of injury management that would have restored the eagle's flight. Because its condition carried a grave prognosis for return to the wild, the veterinary team made the decision to humanely euthanize the eagle.

During the past two and a half weeks, Bald Eagle #21-3792 has been closely monitored by the veterinary staff. On January 11, the staff determined that the wound under the bird's right wing had sufficiently healed, and the eagle was transitioned to the Center's outdoor Metals enclosure in a large crate.

On January 17, the rehabilitation staff observed that a wound on the eagle’s left elbow that was present upon admission had reopened. The veterinary staff found soft-tissue swelling and discharge and anesthetized the eagle so that they could surgically debride the area. While the eagle was anesthetized, repeat radiographs were taken, revealing a complete fracture of the left humeral bone near the injury. A small, displaced bone fragment was also seen. It's possible that this fracture occurred while the eagle was housed Metals.

The bird was transitioned back into the indoor Hold area, where staff could closely monitor the eagle during treatments. During the past week, the veterinary team have flushed and cleaned the eagle's wound while checking for signs of infection, applied clean bandages, administered medications, and have performed laser therapy on the affected area each day. While repeat radiographs taken on January 25 showed a decreased amount of swelling in the area, daily observation and treatment will continue.

For now, Bald Eagle #21-3792 will remain in Hold. Veterinary staff will perform an additional set of radiographs during the coming week, and will determine the likelihood of this patient's full recovery at that time. Currently, the eagle's prognosis remains poor.