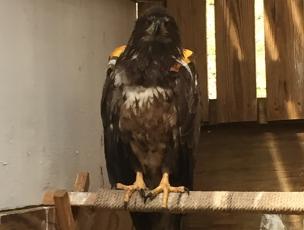 On March 29, a juvenile Bald Eagle was found on the ground and unable to fly near a landfill in King and Queen County, Virginia. The eagle, a female approximately one to two years in age, was transferred to the Center on March 30 by permitted wildlife rehabilitator Dana Lusher of Nature's Nanny Wildlife Rehabilitation.

On arrival, Dr. Cam -- the Center's Veterinary Intern -- performed a full medical examination. The eagle was found to be quiet, but alert, standing, and positioning its wings appropriately inside the enclosure. Dr. Cam quickly identified a deformity in the eagle's beak: the maxillary [upper] portion of the beak was deviated to the right, overgrown, and showed signs of flaking. Palpating the beak revealed a soft spot on the right-hand side.

A physical exam showed that the eagle was underweight (with a body condition score of two on a scale of five), but had an appropriate feather coat. A thickened area of the left radius was identified, which radiographs confirmed is a healing bone fracture. A hardening of the surrounding tissue suggests this injury has been present for some time. Scabs were noted over both orbital sockets, and an in-house lead test showed a clinical toxicity level of 0.395ppm.

The original circumstance of injury is not known, but Dr. Cam suspects one of two possibilities: the eagle may have suffered from a primary traumatic injury (being illegally shot, being hit by a vehicle, or becoming entrapped in a power-line or fencing) causing the wing fracture that led the bird to seek easier food sources at the landfill and ingesting lead, or consuming lead initially resulting in an overall weakened state resulting in the wing fracture. Regardless, the plan of treatment for this eagle remains the same.

Despite this small improvement, prognosis for this patient is poor. Clinical levels of lead toxicity can develop into a variety of neurologic symptoms, and special consideration will be given to the eagle's beak injury -- if continued deformity is observed, the possibility of release will likely not be acceptable.

Sadly, Bald Eagle #21-0345 was euthanized on May 11. On May 8, the eagle was transferred to a larger outdoor enclosure, and on May 10 the rehabilitation staffed noticed a wing droop not previously observed. The veterinary staff performed a set of diagnostic radiographs the following day, revealing the development of shoulder injury that was not present during the eagle's intake exam, and likely related to the eagle's environment in captivity.

Additionally, Director of Veterinary Services Dr. Karra noted that the bird's beak deformity had not improved during the past three and a half weeks of treatments. Considering both of these injuries, the possibility of a full recovery was grave, and humane euthanasia was selected.