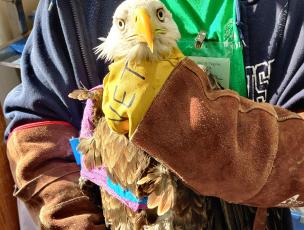 On the evening of February 16, a member of the public found a Bald Eagle on the ground in their yard in Troutville, VA. After determining the bird was unable to fly, so they contacted the Southwest Virginia Wildlife Center, a permitted local wildlife hospital and rehabilitation center. One of their staff members was able to capture the eagle and bring it back to their facility later that night. On arrival, their veterinary staff examined it and discovered that it had a fracture of the ulna in its right wing. After bandaging its wing to stabilize the fracture and administering anti-inflammatory medication and fluids, the eagle was transferred to the Wildlife Center of Virginia the following day for further evaluation of its injuries.

On admission the eagle was quiet but alert and responsive. Dr. Cameron, one of the Center’s veterinary interns, performed a physical exam which revealed a heavy infestation of lice and swelling on two of the toes on the eagle's right foot, one of which was infected and had necrotic tissue and discharge around the base of the nail. During the exam, Dr. Cameron removed the eagle's bandage to examine its injured wing. The wing was swollen, had a decreased range of motion, and made a grating sound when moved, all indicative of a fracture. Radiographs were taken and confirmed the ulna fracture found by the veterinary staff at the Southwest Virginia Wildlife Center. Because eagles are often admitted with lead toxicity, a blood test was also performed after its exam, and came back positive for 0.13 ppm of lead -- a subclinical level that may be unlikely to cause noticeable symptoms, but still requiring treatment.

Based on the eagle’s injuries, Dr. Cameron suspects that it endured some form of blunt force trauma, the most likely cause being a vehicle collision. He immediately applied a bandage and body wrap to stabilize the eagle’s injured wing, which he believes will be sufficient for the fracture to heal correctly due to the location of the fracture and the minimal displacement of the injured bone. The wounds on its toes were flushed with iodine and the eagle began a course of antibiotics, which Dr. Cameron hopes will clear up the infection. In addition, the eagle started chelation therapy to remove the lead from its system, fluids to protect its kidneys during treatment, and a course of anti-inflammatories. A topical spray was also applied to treat its lice infestation.

The day after admission, blood work revealed that the eagle was also mildly anemic. To help resolve this issue, an iron supplement was administered by the veterinary staff.

The eagle is currently being housed in the Center’s indoor holding area where it can rest between treatments and the veterinary staff are able to closely monitor it. They note that the eagle appears brighter after starting treatment, though given its condition and multiple injuries, its prognosis is guarded.

Sadly, veterinary staff found Bald Eagle #21-0161 deceased in its crate on Thursday, March 18. While its toe infection had been difficult to treat, veterinary staff felt that the infection was improving and moved the eagle to one of the Center’s outdoor enclosures. However, after changing its bandages on March 17 the eagle became dull and weak, and had difficulty standing when returned to its enclosure. Veterinary staff immediately brought it back inside and placed it on heat support with IV fluids. Bloodwork revealed that the eagle had increased kidney values, which could have been caused by dehydration or associated with kidney disease. Bloodwork also revealed a small remnant of lead still in the eagle’s system, which also could have caused its increased kidney values.

The veterinary team are unsure what exactly caused the eagle’s death, but they suspect that the combination of stress and long-term inflammation led to its decline in health.

During the past three weeks, Bald Eagle 21-0161 has remained indoors for daily treatments with the veterinary staff. Chelation therapy was successful in removing the lead from the eagle’s system, and its right wing fracture is showing signs of healing. However, the wound on its toe has been difficult to treat. After showing no improvement during an initial course of antibiotics, the Center’s veterinary staff surgically implanted several antibiotic beads inside the wound, and started the eagle on a second course of two different antibiotics.

Despite the added treatment, including flushing the wound daily with an antiseptic, healing of the tissue around the base of the nail started to slough and looked more swollen and necrotic. On March 3, veterinary staff anesthetized the eagle to explore the wound, but the incision site started bleeding and was difficult to stop. To prevent any possible injuries, they bandaged the toe and canceled the procedure. Before the eagle recovered from anesthesia, they were able to take radiographs which showed that despite the wounds outward appearance, internally the affected bone and joint had improved, so they continued to aggressively treat its infection. The eagle recently finished its second course of antibiotics, and veterinary staff report that its swelling has gone down, and radiographs are showing continued improvement.

The veterinary team are currently administering anti-inflammatories and pain medication, and will continue to flush and closely monitor its wound. The eagle will remain indoors for now, where staff will begin performing physical therapy on the eagle's injured wing.