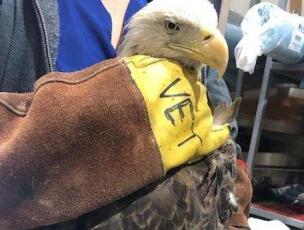 On the morning of February 12, a private citizen found a Bald Eagle on the ground near a country road in Carson, VA. Permitted wildlife rehabilitator Deborah Woodward was able capture the eagle, which she described as being extremely lethargic. Despite the inclement winter weather, it was decided that it was best to transport the eagle to the Wildlife Center as soon as possible. Bernadette Ames of the Wildlife Rescue League picked up the eagle and transported it to the Wildlife Center later that evening.

Dr. Sarah, one of the Center’s veterinary interns, examined the eagle when it arrived. On admission it was standing in its crate but was very dull, and its head was hanging low. A physical exam did not reveal any obvious injuries. Based on its weakness and lack of visible injuries, Dr. Sarah suspected it had been suffering from lead toxicity, a common cause of admission for eagles at the Wildlife Center. A set of radiographs confirmed Dr. Sarah’s suspicion, which revealed metal debris present in the eagle’s digestive tract. An in-house lead test came back with a positive reading of 3.68 ppm, a very high level. 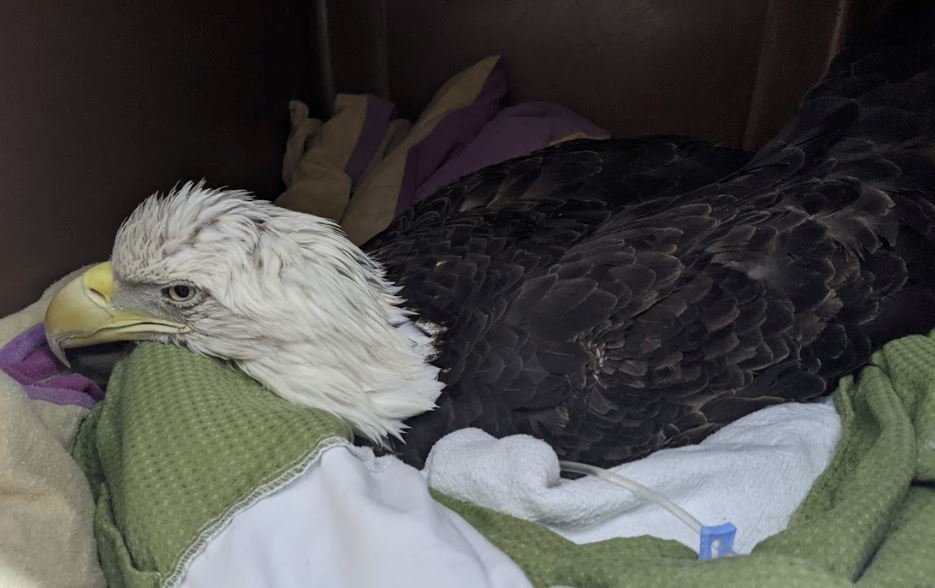 Dr. Sarah immediately irrigated the bird's stomach to remove the fragments of lead and started the eagle on chelation therapy to remove the toxin from its system. In addition to lead toxicity, the eagle was mildly dehydrated, anemic, and had a mass on its esophagus, which is suspected to be caused by the parasite trichomonas. It also tested positive for the intestinal parasite capillaria. It was started on a course of anti-parasitic medication and given fluids to correct the dehydration and protect its kidneys during chelation therapy.

The eagle is currently being housed in the Center’s indoor holding area where it can be easily monitored and treated. The Center's veterinary staff noted that it was slightly more active the following day, though its prognosis is guarded.

Unfortunately, Bald Eagle #21-0136 was found deceased in its crate on the evening of February 16. Despite aggressive treatment by the Center's veterinary staff to remove the high levels of lead from the eagles system, it likely succumbed to lead toxicity.