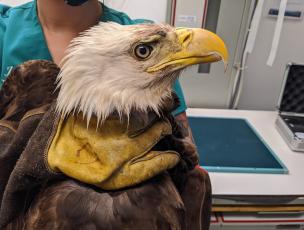 On July 16, a mature female Bald Eagle was admitted to the Wildlife Center from Highland County. Rescuers found that the bird was being "trampled by cows" in a pasture on July 15; the bird was able to be captured and was transported to the Center for care.

Dr. Sarah, the Center's veterinary intern, examined the eagle on admission. The bird was thin and dehydrated, but otherwise, the physical examination was unremarkable. Blood work confirmed a lead level of 0.127 ppm; this level is generally considered "subclinical", meaning that lead is present, but typically patients with this lower level of lead don't exhibit symptoms. In this bird's case, the team suspects her quiet, subdued attitude and thin body condition is likely due to the presence of lead. Since no level of lead is safe, the veterinary team started a course of oral chelation therapy.

During the next few days, the Bald Eagle's attitude improved significantly. On July 20, the eagle finished her course of treatment for lead poisoning, and on July 21, the veterinary team performed a follow-up lead test which was "low". The eagle moved to an outdoor C-pen enclosure for additional observation. Another lead test will be performed in a few weeks.

Your donation will help provide veterinary medical care to this Bald Eagle ... and more than 3,000 other wild animals in need this year. Thank you!

On October 4, a small group of Wildlife Center staff released Bald Eagle #20-2508 in Highland County, near the location where the bird was first rescued earlier this year. Development Associate Marley was able to capture several photos of the eagle’s release, reporting that the bird hopped out of the crate and ran into a nearby thicket before disappearing from view. 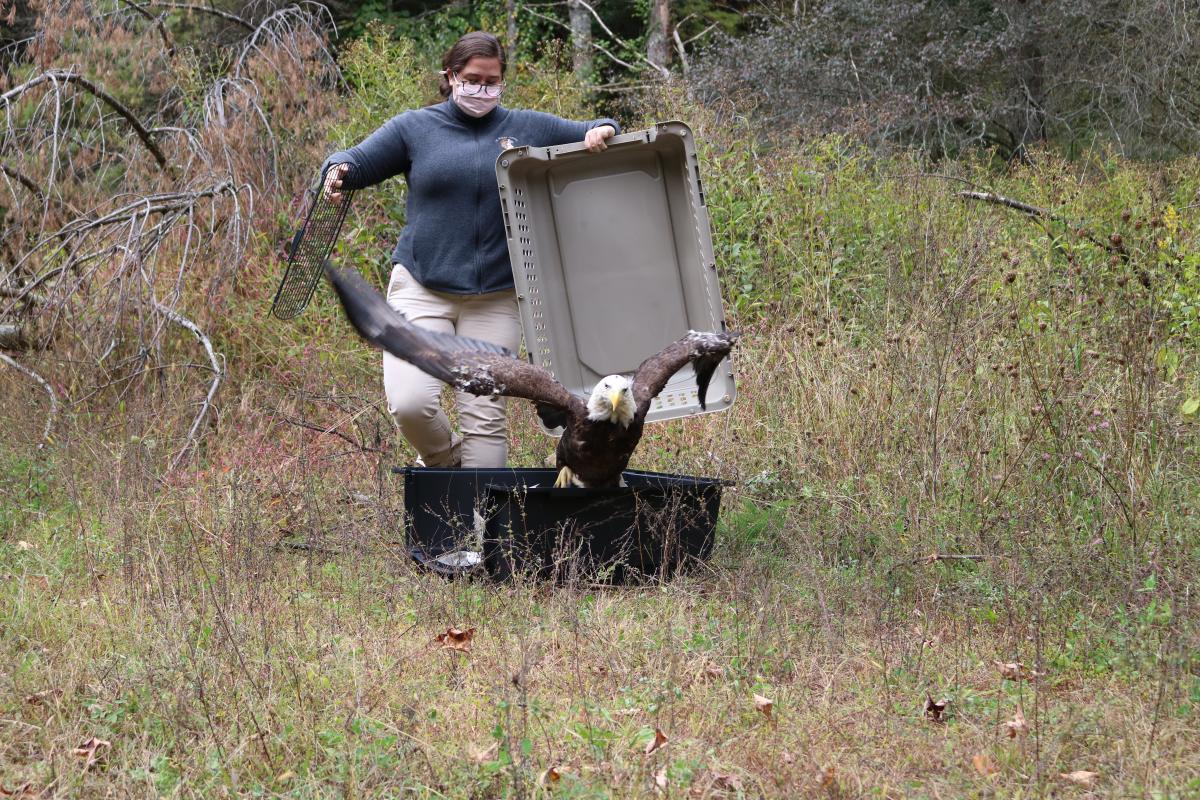 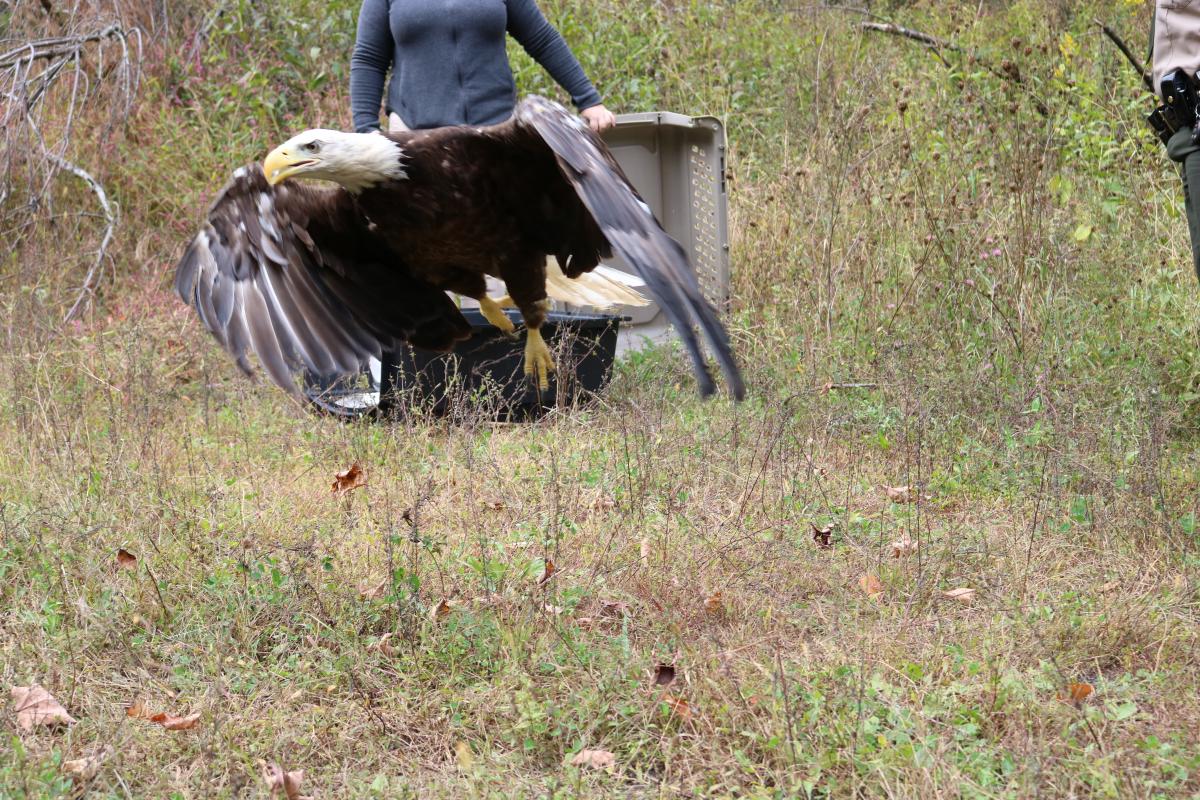 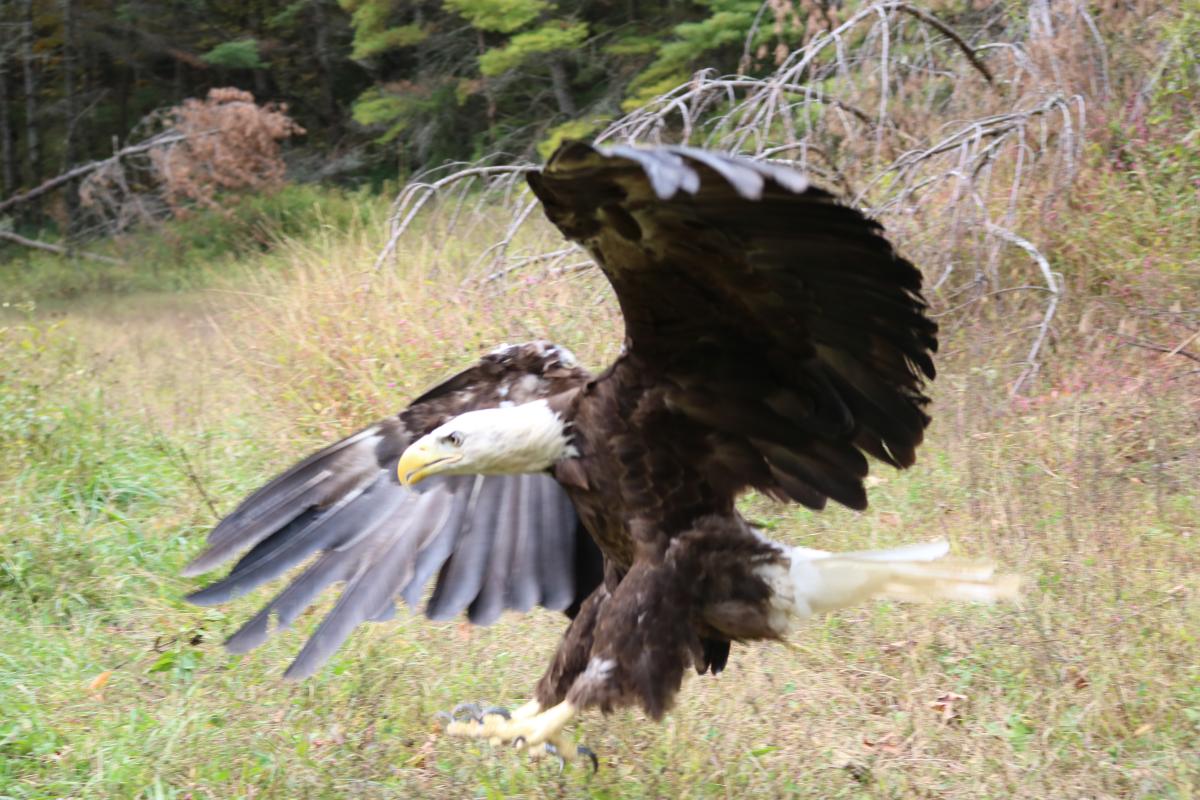 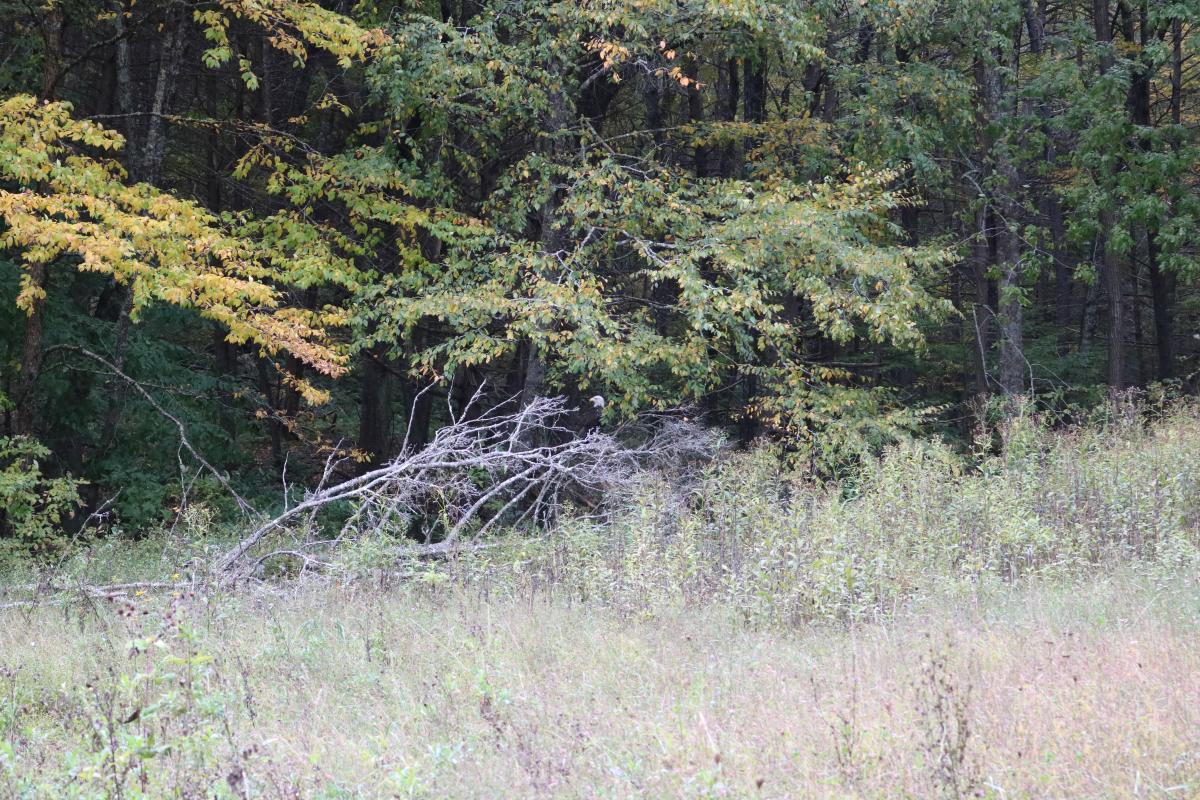 Bald Eagle #20-2508 has been flying well in the Center's large flight pen, regularly completing more than 15 passes during daily exercise.  On September 28, Dr. Karra performed another set of radiographs on the bird, finding that its carpal fracture no longer had soft tissue swelling, and that the wing looked completely healed.  This eagle has been cleared for release, and will be returned to the wild in Highland County – the site of its original rescue – on October 4.  Due to the COVID-19 pandemic, the release will not be open to the public, but the release team may be able to film this bird's flight back into the wild.

Bald Eagle #20-2508 has been doing well in flight pen A3 during the past twelve days. The rehabilitation staff report that the eagle is flying between 5-10 passes of the 96 foot-long enclosure during daily exercise, showing proper form in flight and an increase in physical stamina. Dr. Karra performed a follow-up set of radiographs on the eagle’s left wing on September 17, and noted that a significant amount of soft tissue swelling associated with the eagle’s original carpal injury was still present. For now, the bird will remain in flight pen A3 where it will receive daily exercise and monitoring. The veterinary staff plan to consider the possibility of this eagle’s release after performing another set of radiographs on September 28. In the meantime, Critter Cam watchers may see this eagle, along with Bald Eagle #20-2906, on Critter Cam #2!

Following two weeks of lead toxicosis treatment, cage rest, and indoor physical therapy, the veterinary team determined that Bald Eagle #20-2508 was ready to be moved to outdoor flight pen A3 on September 3. In this large, open-air enclosure, the rehabilitation staff will exercise the bird each day while monitoring its flight and physical stamina. Most recently, the staff noted that the eagle was able to complete between 5-10 passes of the enclosure before reaching exhaustion. The bird will remain in flight pen A3 alongside Bald Eagle #20-2906 during the coming weeks, and the rehabilitation staff will continue to assess the eagle's physical conditioning before considering release.

Bald Eagle #20-2508 was moved to flight pen A1 on July 31. The rehabilitation staff noted that the bird did not fly well in this large space, and on August 12, Dr. Sarah examined the eagle. She found that the tip of the eagle's left wing was swollen. Radiographs confirmed soft tissue swelling, and a spiral fracture at the end of the radius, along with a suspected fracture of the radial carpal bone. Compared to radiographs at admission, it appears as though these subtle injuries were present at that point. An additional lead test revealed that the eagle's lead level had increased again, warranting another round of chelation therapy.

The bird was moved into the Center's indoor holding room for lead toxicosis treatment as well as cage rest. Each day, the staff perform laser therapy on the bird's injured wing; at this point, the eagle has good range of motion of her injured wing, and the swelling has decreased since last week.