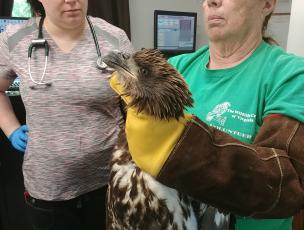 On June 17, a private citizen in Poquoson, Virginia saw an immature Bald Eagle on the ground and called the local police department. An officer went to the rescue location and called local permitted wildlife rehabilitator Dana Lusher, who in turn, called a local registered volunteer transporter who regularly makes trips between Hampton Roads and the Wildlife Center. The eagle sat on a bench before it hopped off and was able to be captured. 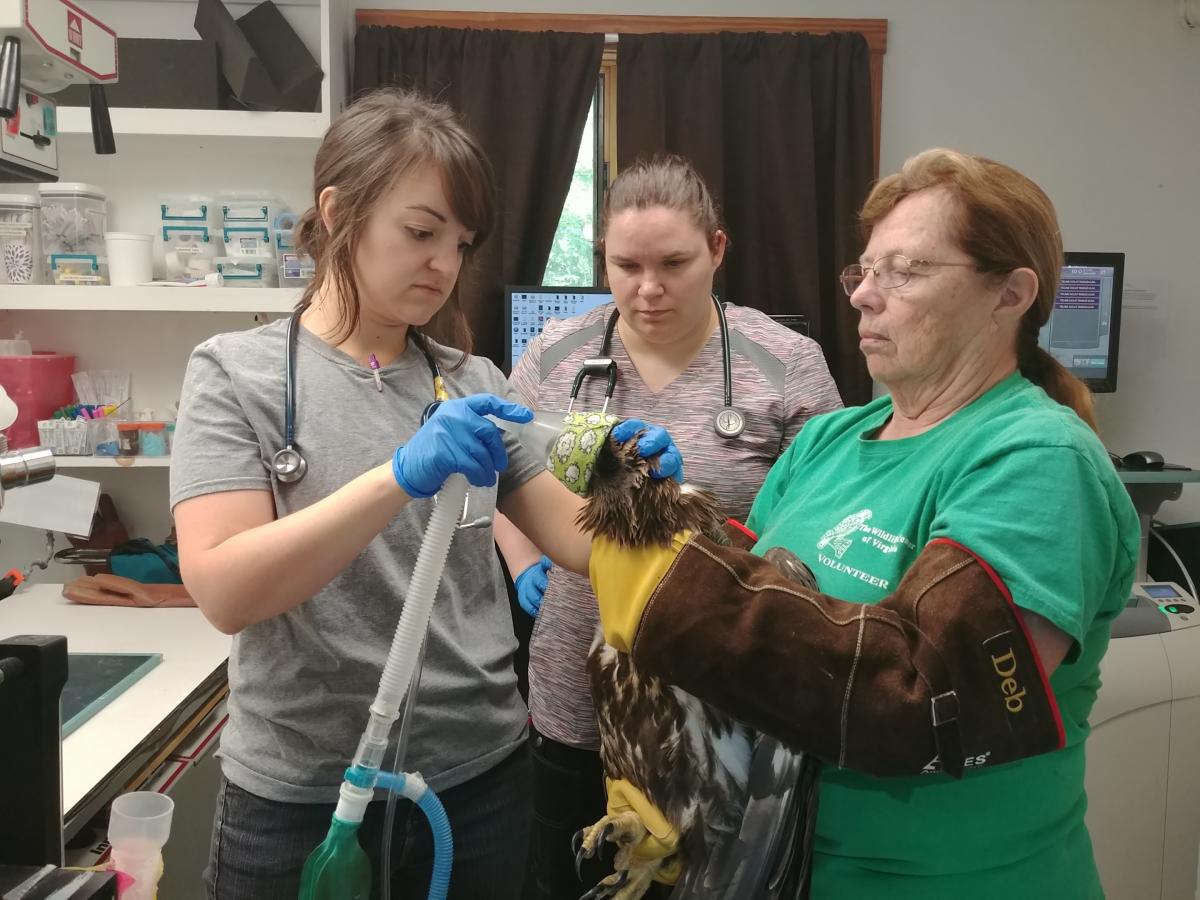 When the young eagle arrived at the Center, it was quiet but alert and was standing normally in the transport crate. Dr. Peach, the Center’s veterinary research fellow, examined the Bald Eagle and found that it was very thin, covered in feather lice, and had a significantly low heart rate. Dr. Peach provided a dose of atropine to stimulate the heart.

The eagle’s eye examination was within normal limits; blood was taken and revealed a “low” lead level (which is essentially within normal limits). The additional blood work indicated that the bird was anemic and had an abnormally low level of protein in the blood, likely due to the bird’s very thin body condition. Dr. Peach attempted to anesthetize the eagle for radiographs, but the bird’s heart rate dropped quickly, so Dr. Peach decided to treat the bird for anemia, dehydration, and parasites, and then settled the bird into a crate for the night.

It’s likely that this hatch-year bird was not being cared for by its parents, though organophosphate toxicity can also cause a very low heart rate.

The following morning, the eagle was stable enough for anesthesia and Dr. Peach was able to take radiographs of the young bird. She noted that the eagle’s right leg was swollen, though no fractures were noted.

The eagle will remain in the Center’s holding room until it is eating well and gains weight. The bird’s prognosis is guarded due to the low heart rate and very thin body condition.

Your donation will help provide care to this injured Bald Eagle -- and the 3,000 other patients the Wildlife Center will treat this year.

Bald Eagle #19-1678 was successfully released on August 21 at South Lawson Park on Poquoson. There were nearly 100 people in attendance; the eagle flew off toward the treeline and out of sight. 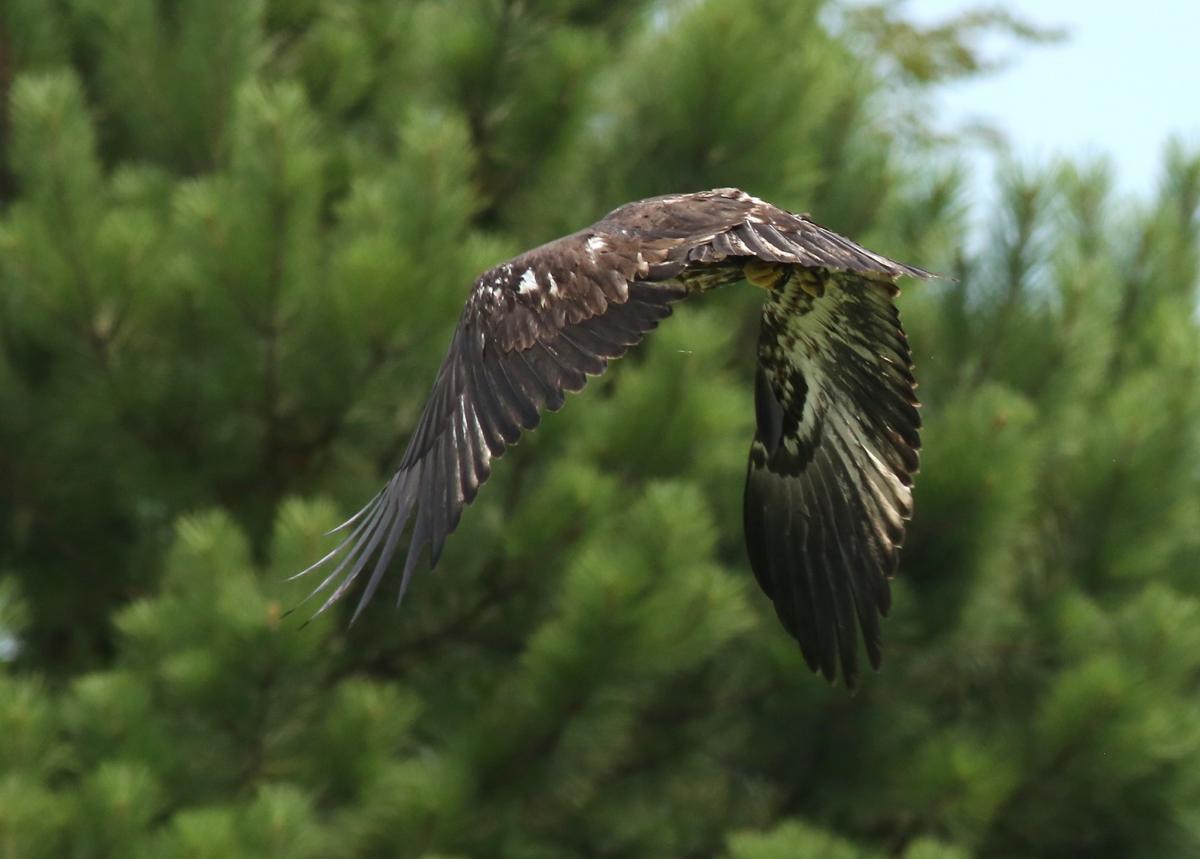 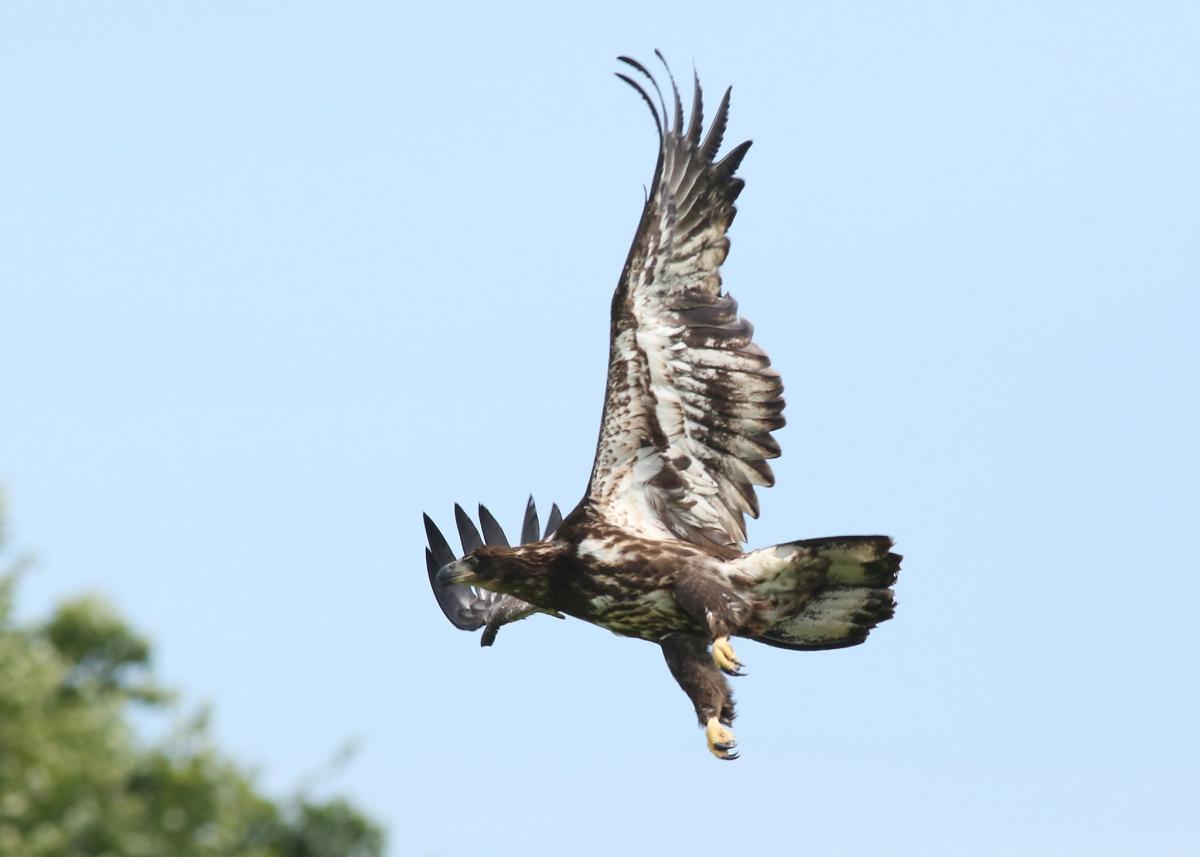 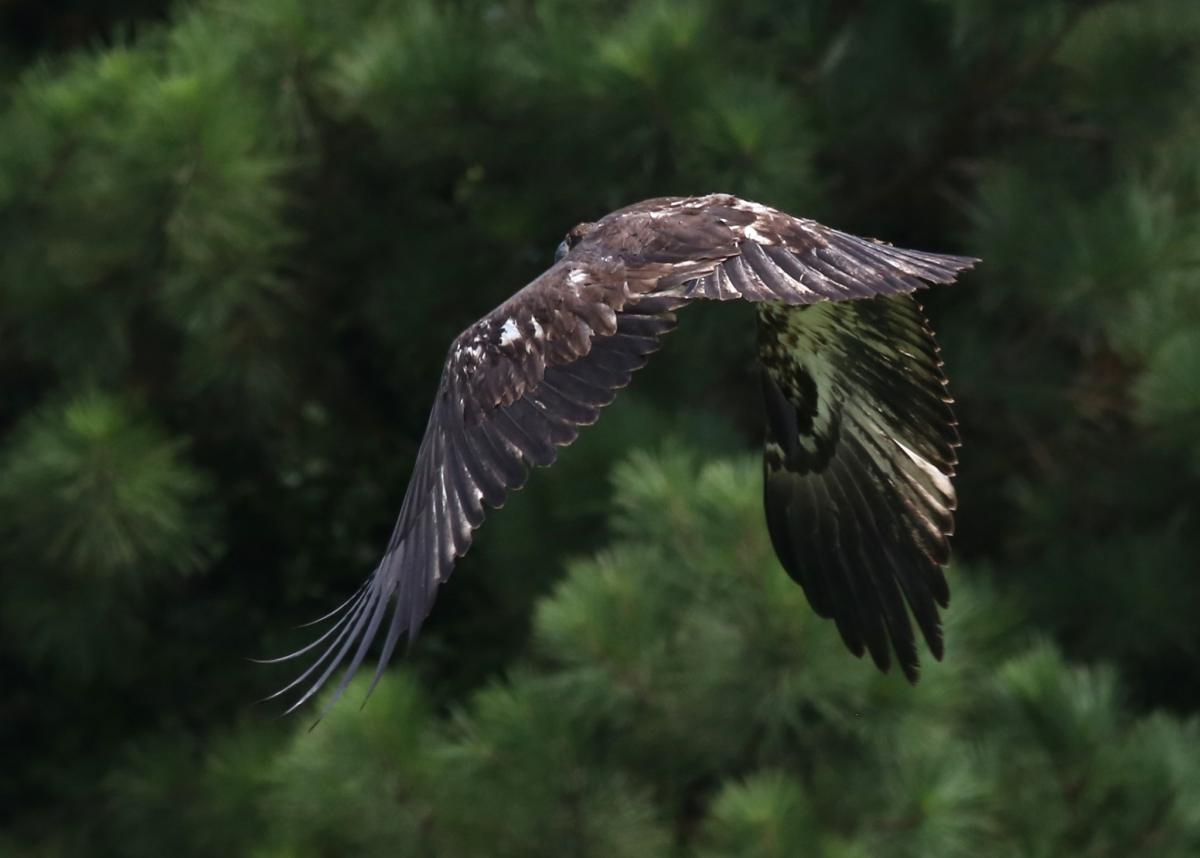 Bald Eagle #19-1678 has been doing well the past week; on August 19, blood was drawn for a pre-release analysis. The veterinary team noted that the eaglet has some missing feathers directly on top of his skull, though Dr. Karra notes that this should not impede release. Dr. Karra was happy to report that blood work was within normal limits and the eaglet was cleared for release.  The state eagle biologist does not currently have available GPS transmitter units for the eagle.

The release has been scheduled for Wednesday, August 21 at 12 noon at South Lawson Park in Poquoson. The release is free and open to the public; Wildlife Center President Ed Clark will return the bird to the wild. Release attendees are asked to rendezvous at the main parking area of South Lawson Park [1224,1248 VA-171 Poquoson VA 23662]. Those who plan on attending should RSVP to rsvp@wildlifecenter.org; please indicate which release you plan on attending since there are multiple releases scheduled this week!

Bald Eaglets #19-1678 and #19-1013 have been doing well in flight pen A3 this summer. Both started exercise on July 31, and quickly advanced to the optimum level of exercise; both birds are flying at least 15 passes perch-to-perch during their daily exercise. Wildlife rehabilitator Kelsey will assess the young eaglets this week to see if the team can start thinking about a release later this month. Once the eagles are flying and maneuvering appropriately, Kelsey will reach out to the state eagle biologist to see if he can band the birds prior to release; he may also have available GPS transmitters for the eagles.

Bald Eagle #19-1678 has been in the raptor tower portion of the A3 flight enclosure for the past week; though the doors of this balcony area were opened late last week, the young eaglet has not yet “fledged” from his nesting area. The other eagles in the enclosure have been seen visiting and calling to the young bird.

As of June 19, just two days after admission, Bald Eaglet #19-1678’s heart rate was within normal limits again. The eagle generally became brighter and more alert in the week following its admission and began eating and gaining weight. The staff and students noted that the eagle was bearing weight equally on both legs, and by June 21, there was no swelling noted on the eaglet’s right leg.

On June 22, the staff moved the young bird to the tower of the A3 flight enclosure. The eaglet will have time to “meet and greet” adult Bald Eagle #19-0031 and fellow eaglet #19-1013 before the tower doors are open. 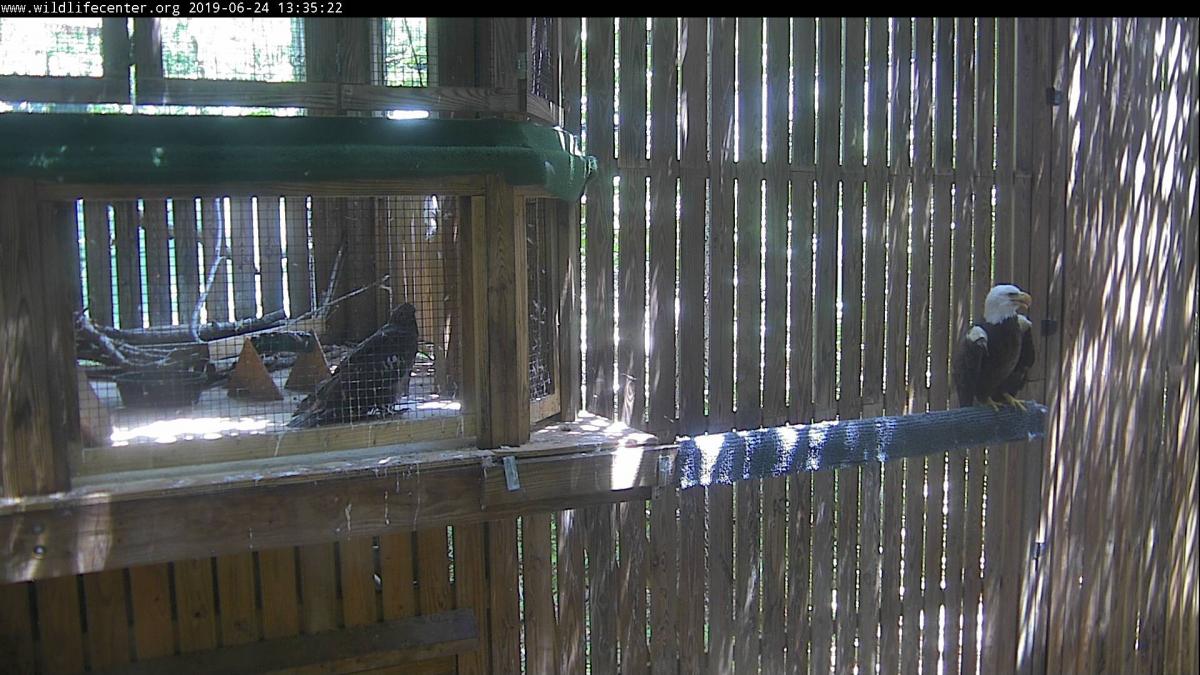