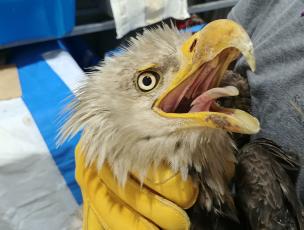 On presentation at the Center, Bald Eagle #19-1573 was bright, alert, and still incredibly feisty; the eagle proved to be very strong when handled by the veterinary team for an examination.

The eagle had severely soiled feathers, and attempts to clean the feathers revealed the substance to be non-water soluble and very sticky. It’s possible that the eagle got stuck in the wastewater pond behind the poultry processing plant; the wildlife rehabilitator who rescued the eagle indicated that the substance on the bird’s feather seemed similar to a greasy substance found on the feathers of hawks and gulls that she had rescued in or near the wastewater lagoons.

The eagle was in poor-to-moderate body condition, and the soiled feathers indicate the eagle may have been grounded for some time.

The remainder of the eagle’s physical exam was within normal limits.  Blood work was unremarkable, and the eagle had subclinical levels of lead that would not require treatment. Radiographs revealed a large amount of food material in the stomach but were otherwise unremarkable as well.

No obvious signs of injury or trauma could be identified during the initial exam, aside from the severely soiled feathers. The veterinary team offered the eagle supportive care and monitored the bird for signs of trauma or chronic injury that may emerge later.

After several days in the hospital, the eagle remained bright and alert with no new symptoms. On June 18, the team moved the eagle to a small outdoor flight pen with a large tub to allow the bird a chance to bathe himself and clean the severely soiled feathers. The substance on the feathers has not yet been identified, but veterinary intern Dr. Karra plans to test different cleaning techniques on several feathers sampled from the bird. If she’s able to identify a method to remove the sticky substance, the veterinary team will bathe the eagle later in the week. 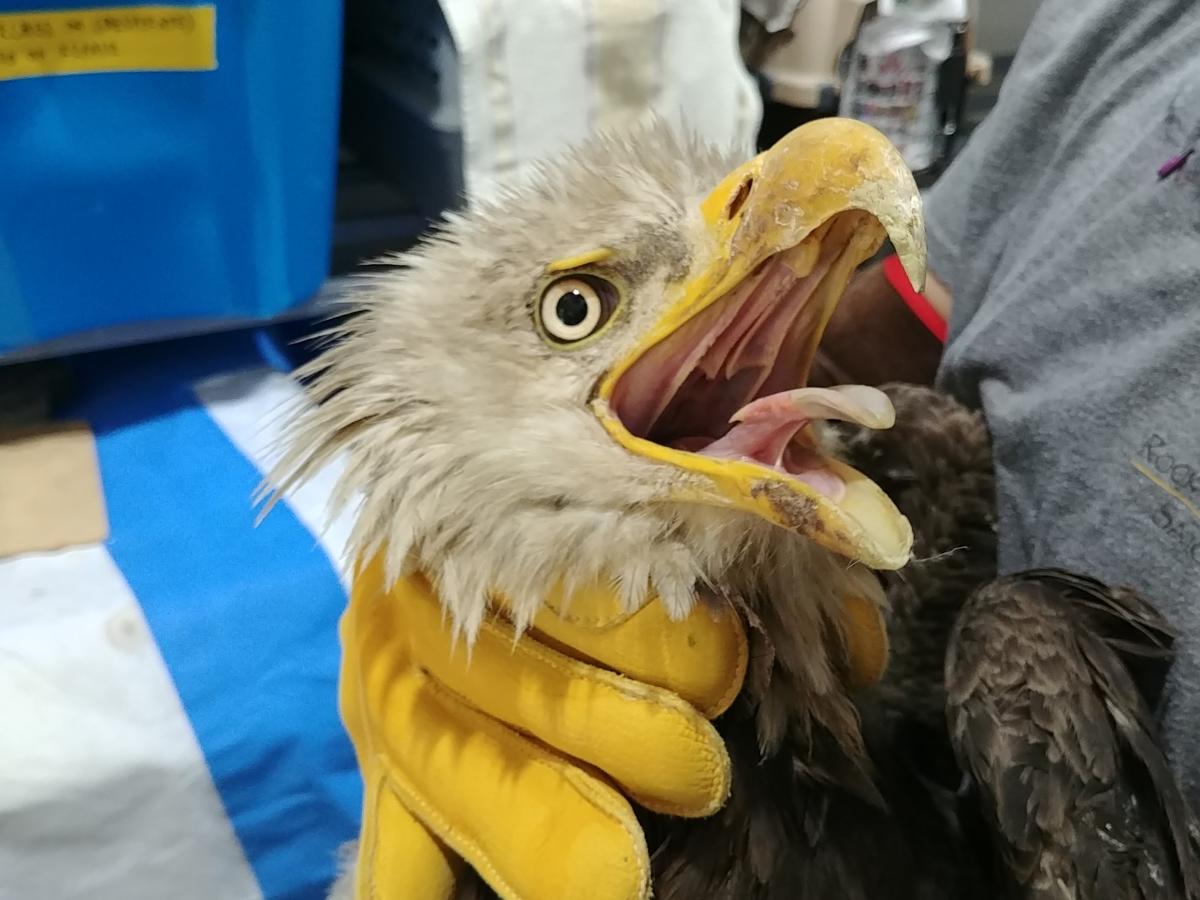 Your donation will help provide care to this Bald Eagle -- and the 3,000 other patients the Wildlife Center will treat this year.

Bald Eagles #19-1013 and #19-1573 were successfully released at Mutton Hunk Fen Natural Area Preserve on Friday, August 23. There were nearly 100 people at the release; both birds flew off well back in their home county. 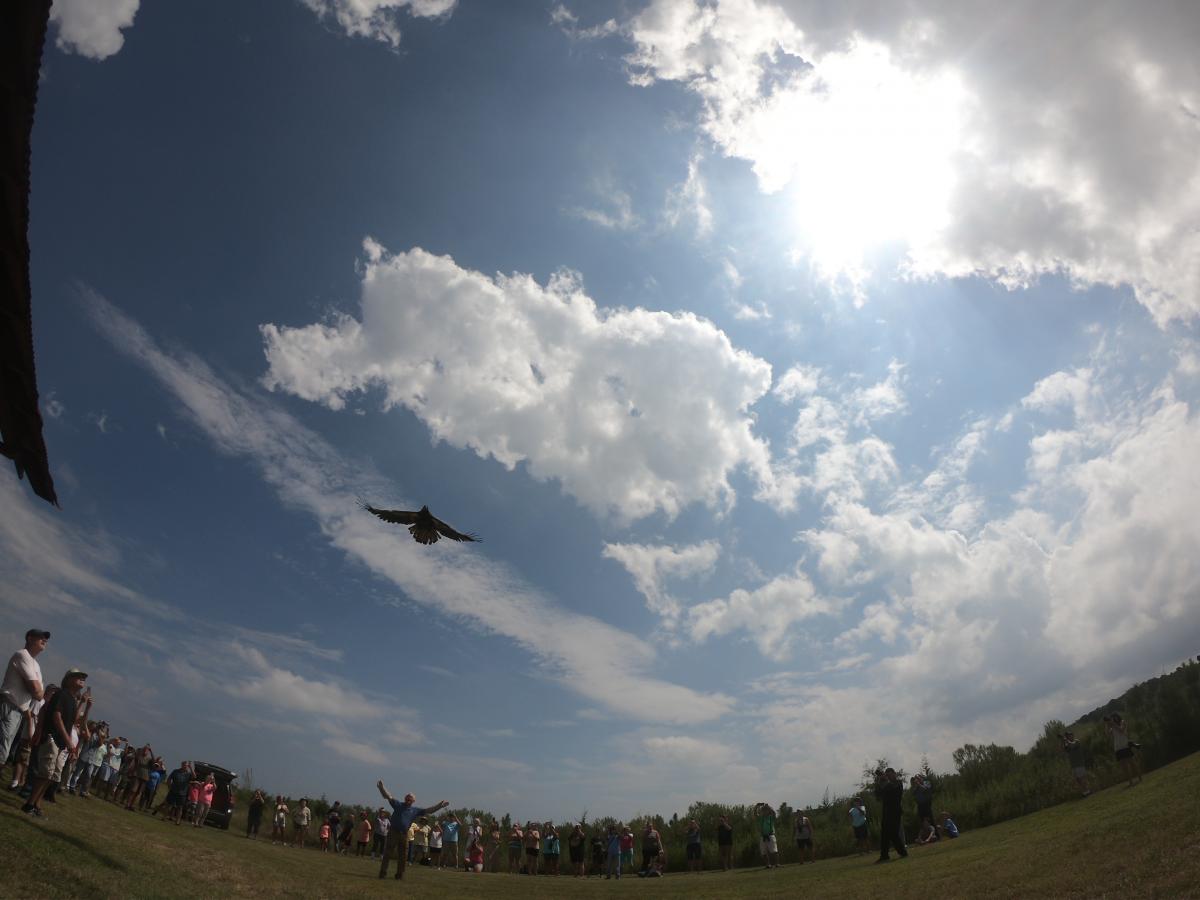 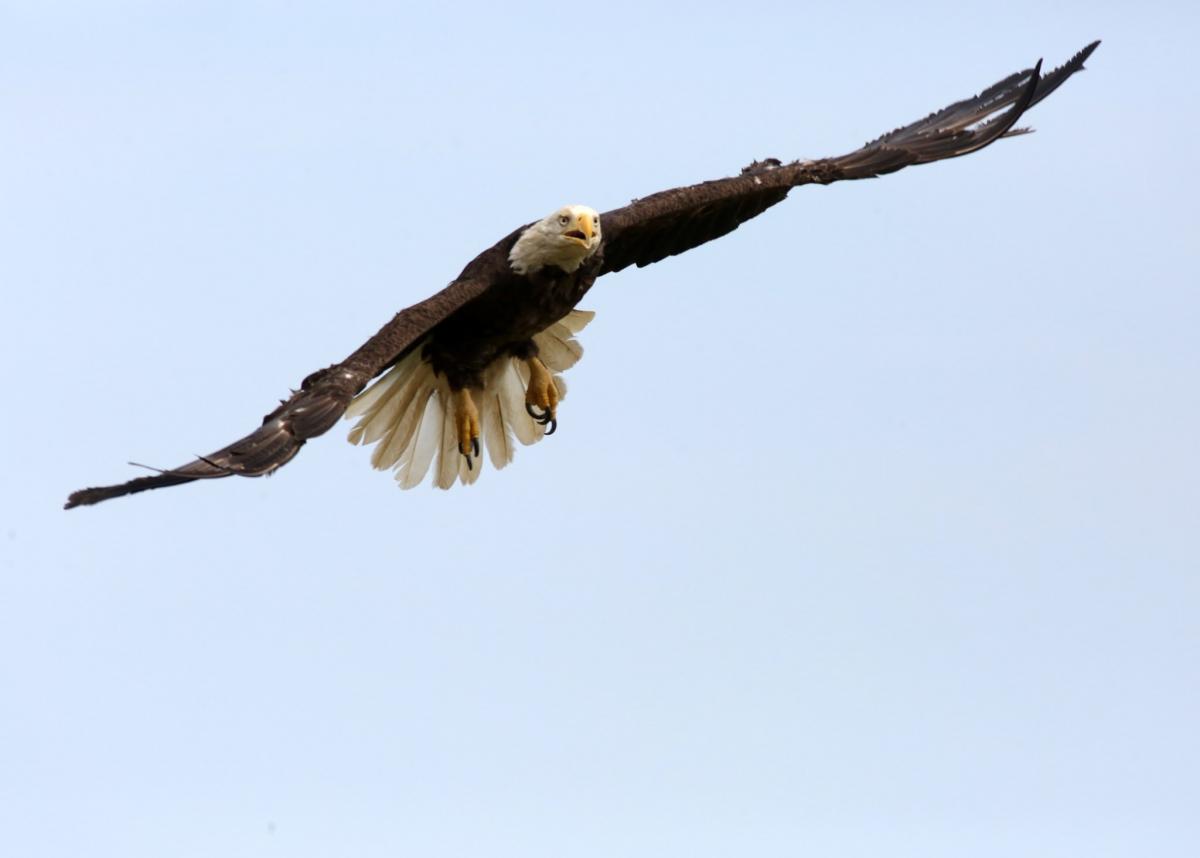 Bald Eagle #19-1573 and Bald Eaglet #19-1013 have been doing well for the past week; both eagles were scheduled for a blood draw on Monday, August 19 for pre-release analysis. Results were within normal limits, and both birds were cleared for release back to Accomack County, where each eagle was rescued earlier this summer. No GPS transmitters are currently available for the eagles. 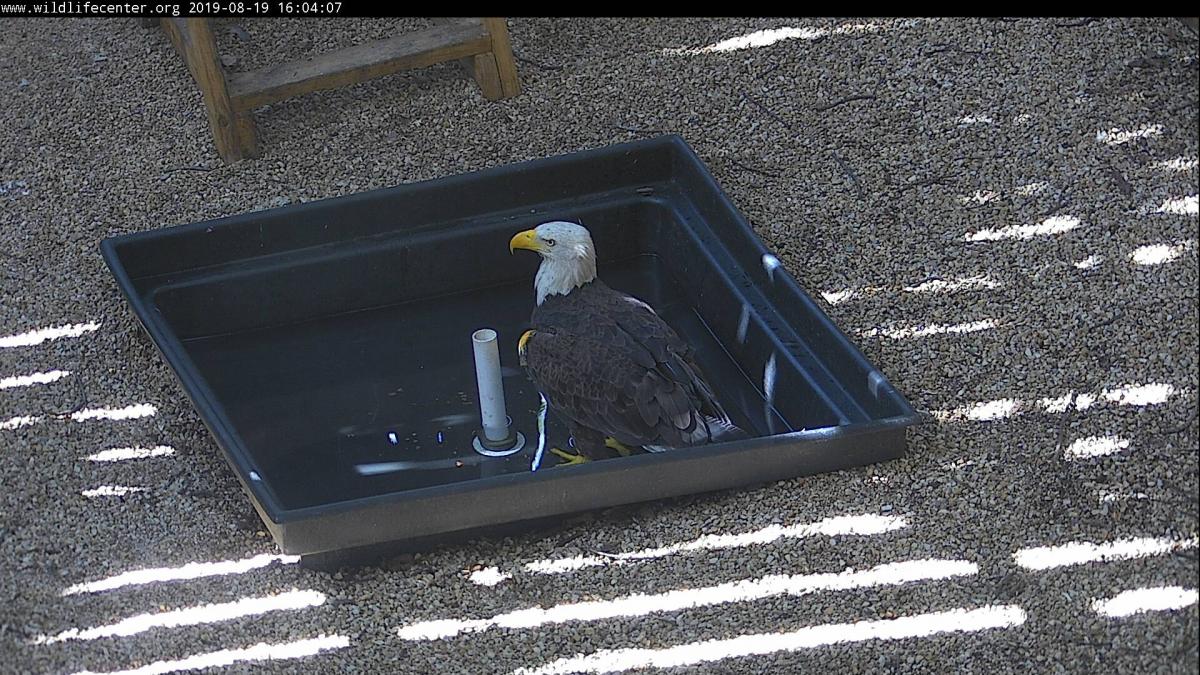 The double eagle release will take place on Friday, August 23 at Mutton Hunk Fen Natural Area Preserve [Route 742 (Baker Road) near Metompkin, VA] at 2:00 p.m. Wildlife Center President Ed Clark will release both eagles. Attendees are strongly encouraged to carpool, and should note that there are no facilities at this location -- please plan on stopping somewhere before the release to use the restroom! Attendees planning on attending should RSVP to rsvp@wildlifecenter.org; please note which release you are attending [Accomack or Poquoson] since we have multiple releases scheduled this week!

Directions to Mutton Hunk Fen: From US-13 (Lankford Highway) turn east onto Metompkin Rd (State Rte. 679). Bear left and drive 1.4 miles. Turn right onto Baker Rd. ( State Rte. 742). Continue on Baker Rd. through the gate and onto the gravel road. Continue straight to the parking area.

The condition of Bald Eagle #19-1573’s feathers have improved during the past month, and shortly after Bald Eagle #19-1666 was released on July 26, the bird was moved to the Center’s largest outdoor flight pen (A3). On July 31, rehabilitation staff began a daily exercise regimen to improve the eagle’s strength and stamina, and monitor the bird’s flight.

For now, the eagle will remain outdoors and continue its daily exercise.

On the morning of June 28, Dr. Karra bathed Bald Eagle #19-1573 with help from veterinary technician Jess and rehabilitation intern Kylee. Using a Dawn dish soap solution, Dr. Karra scrubbed the eagle’s feather with a toothbrush; at the end of the lengthy process, the feathers were mostly clean but there were still some areas with the sticky substance. They placed the eagle into a cage with a fan to blow dry the eagle’s feathers before moving the bird back outside to an outdoor enclosure. 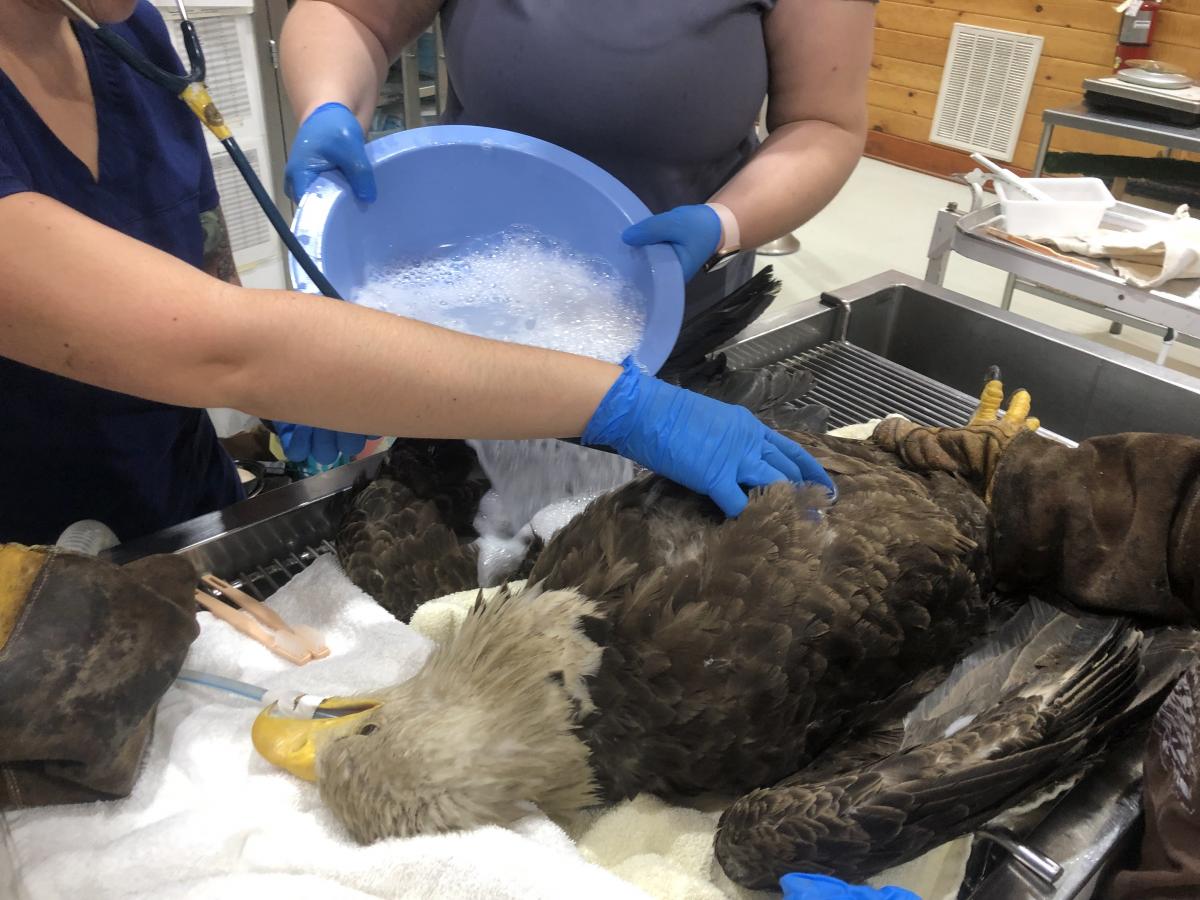 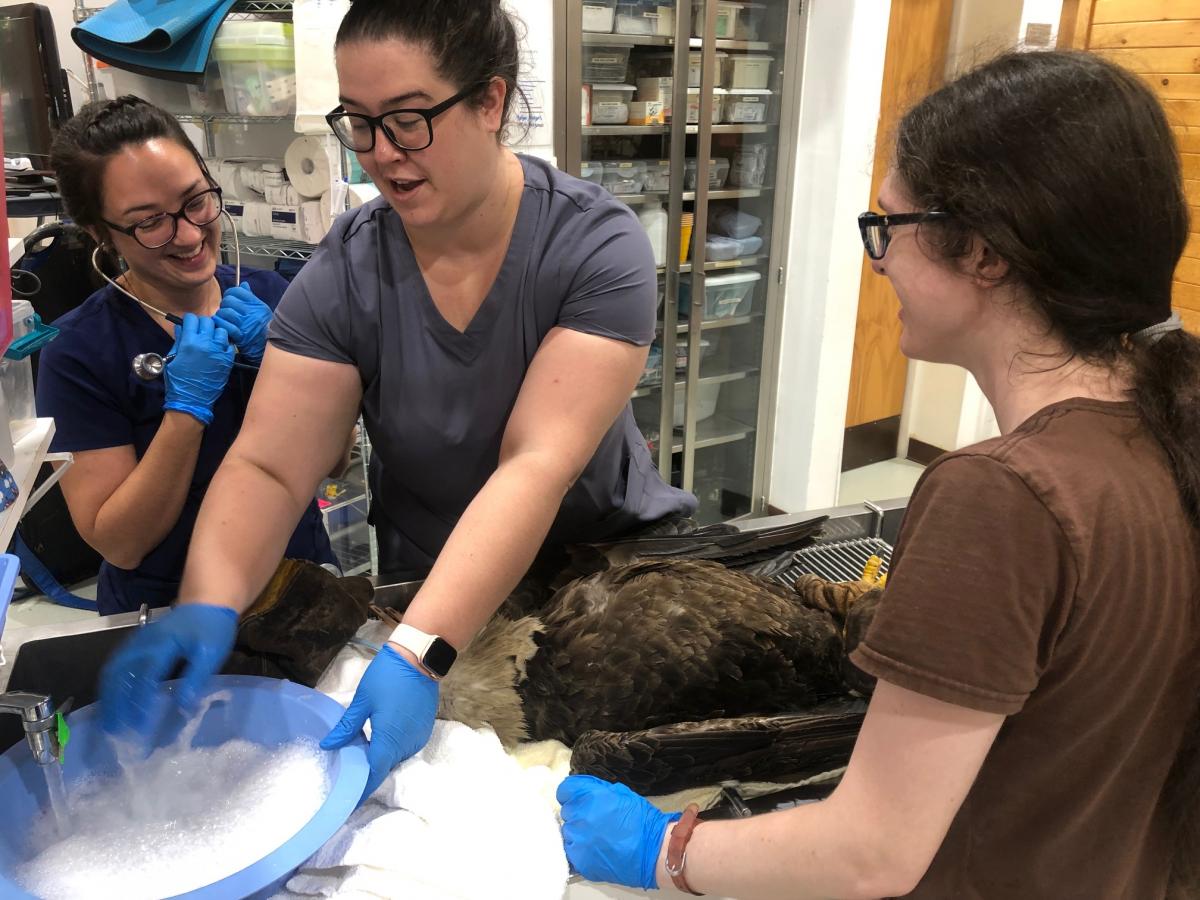 The rehabilitation team reports that the eagle has had a strong appetite and has been able to fly well in the small outdoor enclosure; they hope to move the bird to a larger space, and with cleaner feathers, they anticipate the bird’s flight will improve even further.