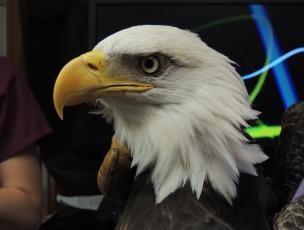 On September 1, an adult male Bald Eagle was hit by a vehicle in Virginia Beach. The eagle was banded as “HK” – a well-known bird in the eagle community. This eagle hatched in 2009 and is a full sibling to Buddy, the Center’s education Bald Eagle, who hatched in 2008. HK has been nesting at the Honey Bee Golf Course in Virginia Beach and is often spotted and photographed in the birding community.

The eagle was taken to a local veterinarian, who examined the bird and stabilized him prior to transport by permitted wildlife rehabilitator Tommy White to the Wildlife Center of Virginia. Dr. Ernesto, along with veterinary student Lauren and visiting veterinarian Dr. Kaleigh, examined HK --  also now known as Wildlife Center patient #17-2257. HK was lying down in the transport crate prior to the exam, but was bright and feisty when restrained for the examination. The team found blood in the eagle’s mouth, indications of internal trauma, and a fracture of the eagle’s right tarsometatarsus near the hock joint. Radiographs confirmed the fracture, and also showed signs of pulmonary contusions [lung bruising]. Dr. Ernesto removed the eagle's silver federal band from the right leg in case of swelling in the days ahead. 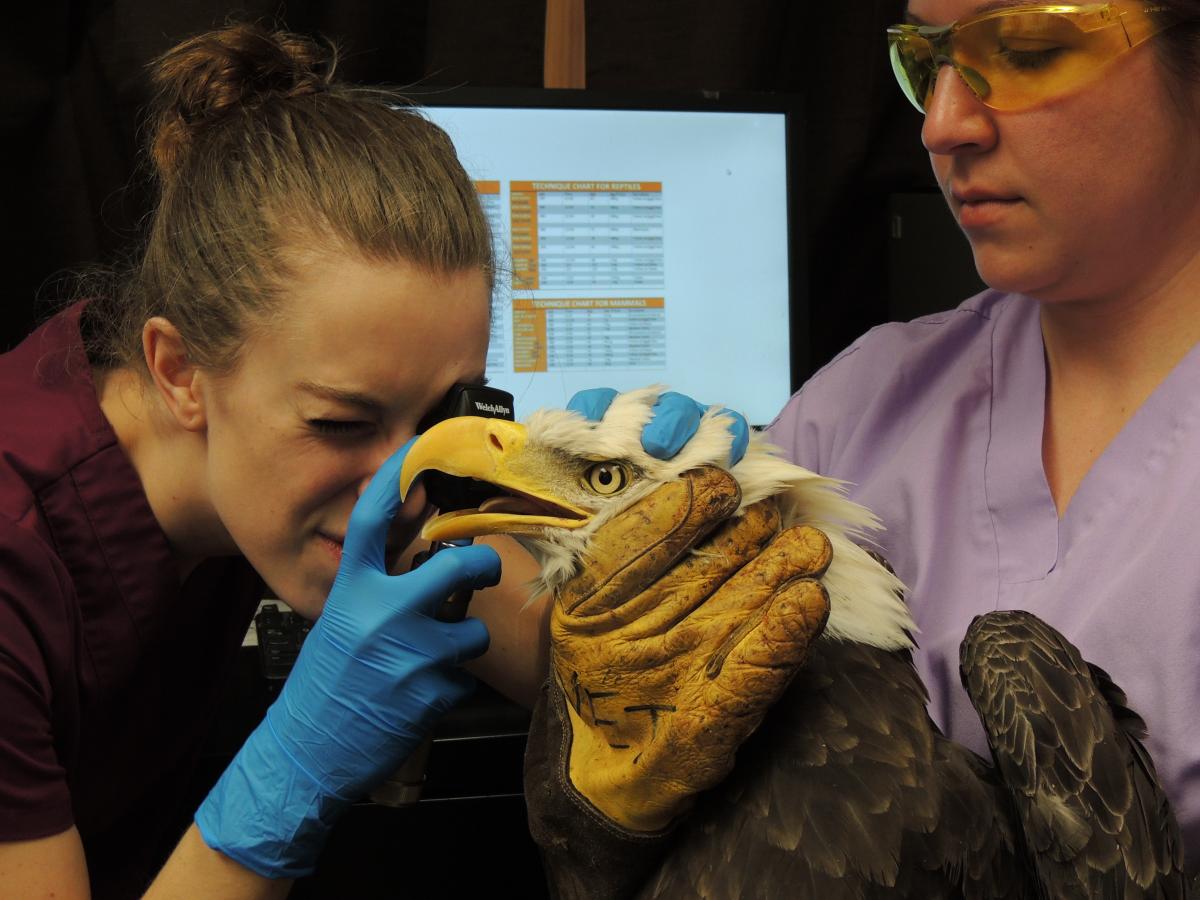 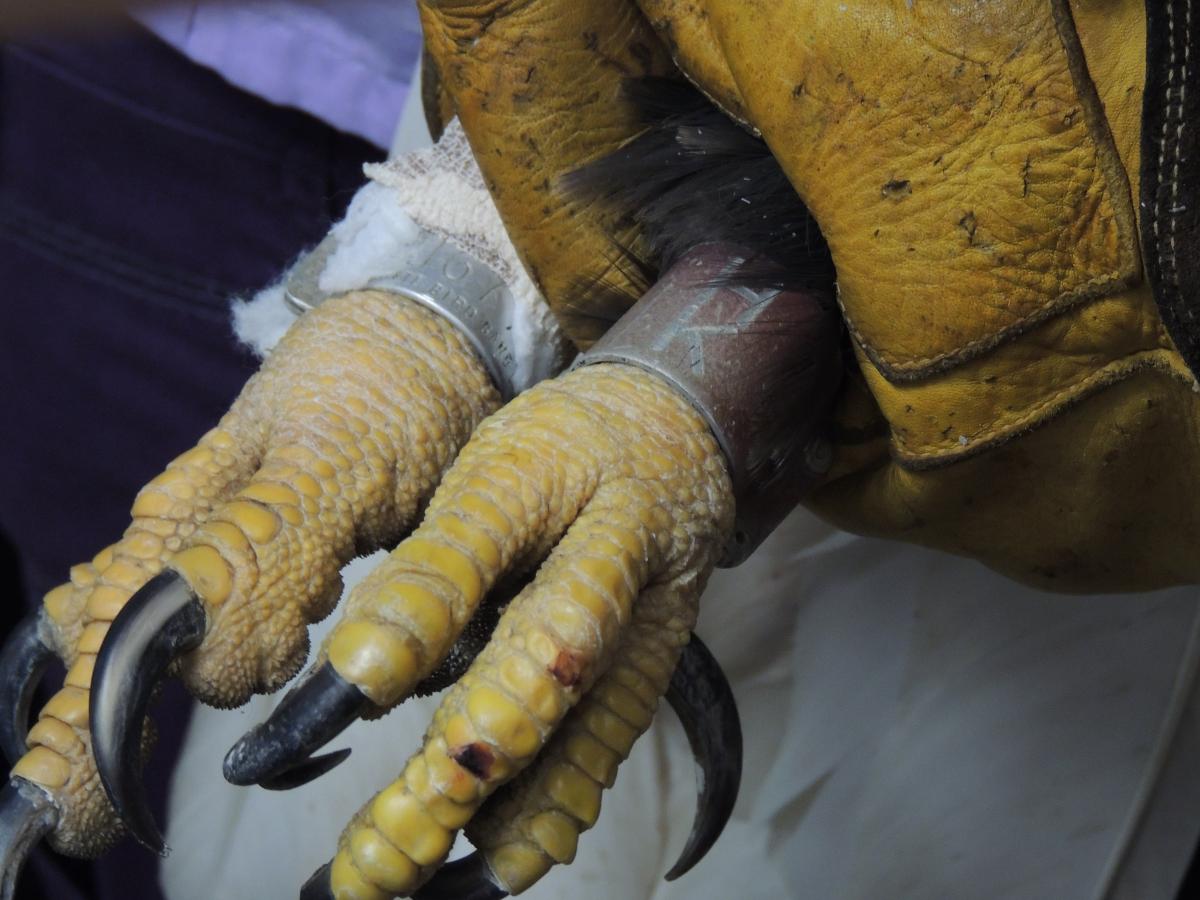 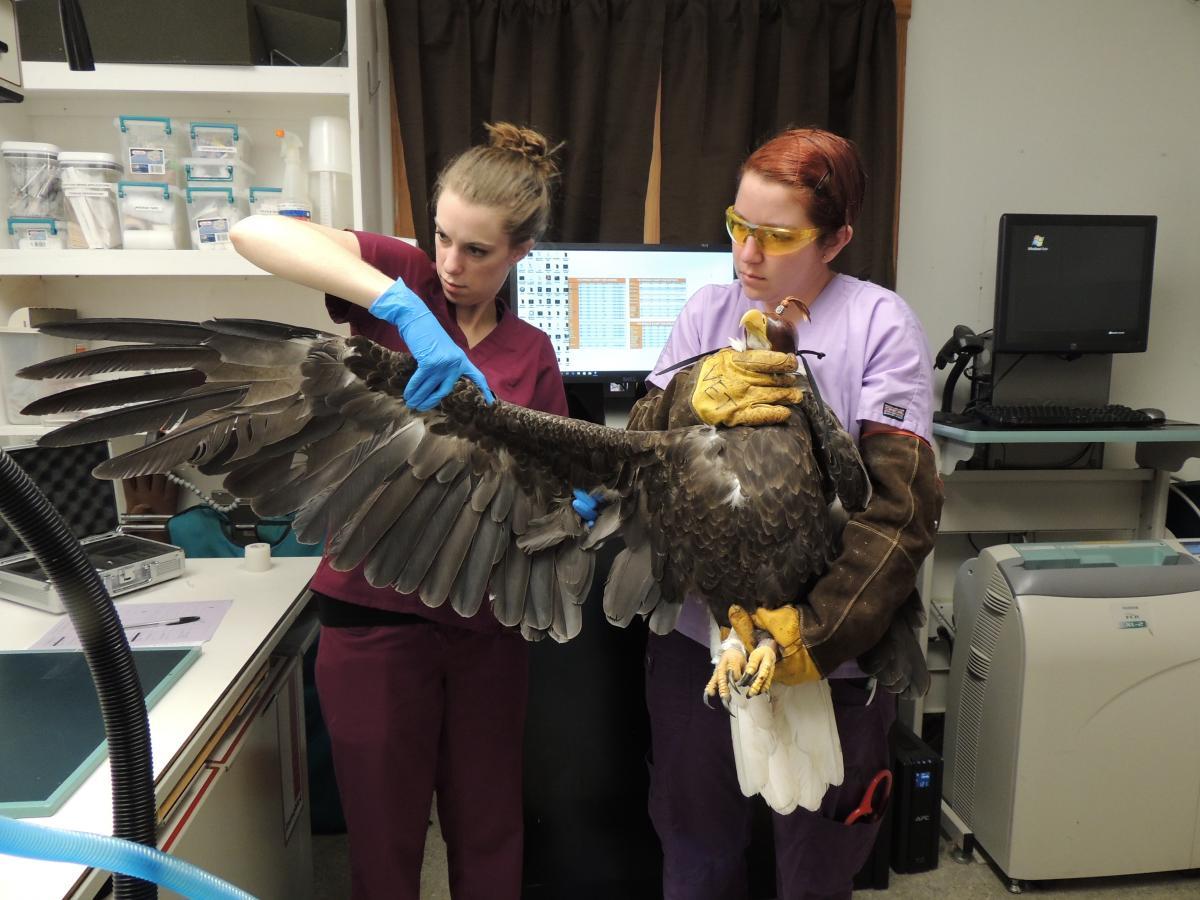 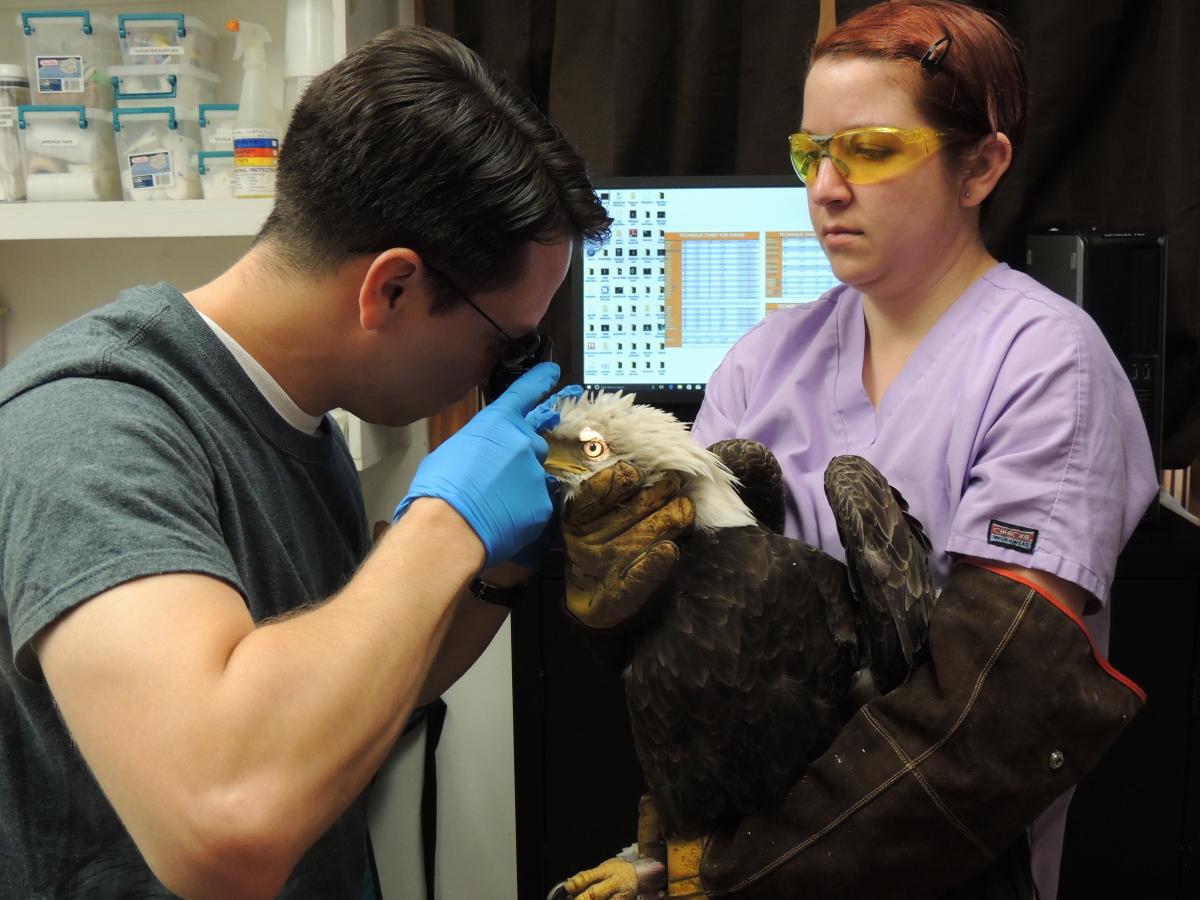 The eagle was given fluids, anti-inflammatories, and pain medication and was set up in the Center's holding room. The fracture will need to be surgically repaired next week and is tentatively scheduled for Tuesday, September 5.

Your special donation will help the Center to provide specialized veterinary medical care to this Bald Eagle … and all of the patients admitted in 2017. Please help!

September 12, 2017
On September 11, Dr. Ernesto performed a necropsy of Bald Eagle HK (patient #17-2257) to determine what injuries the eagle may have sustained and what might have caused the eagle’s death.
The necropsy revealed that HK was in good body condition, meaning the bird was likely doing well before the collision and during his subsequent hospitalization.
Dr. Ernesto examined the right leg fracture site and found that the pins were adequately placed and intact – the surgical repair of the fracture had the potential to be successful. However, Dr. Ernesto  found signs of vascular compression in the right leg, a result of trauma from the collision and surgical repair. Severe swelling cause lack of blood flow and tissue deterioration in the leg and foot as HK was healing post-surgery.
Dr. Ernesto also identified pulmonary and liver contusions that affected the eagle’s breathing and blood circulation, making it difficult for HK to properly oxygenate tissue; this explains why HK had difficulties while under anesthesia.
The most surprising and important discovery during the necropsy was an injury to the eagle’s spine; Dr. Ernesto found severely necrotic thoracic vertebrae (the equivalent of vertebrae in the lower back). Both above and below the dead section of bone, the vertebrae were healthy and intact; the necrotic bone was caused by severe and localized trauma to that section of the spine, likely sustained during the collision. Dr. Ernesto had never seen necrotic vertebrae like this, but further research revealed that there is no successful treatment for this type of injury.

The spinal injury, combined with swelling and compression of nerves, caused HK to lose function in his left leg as well as his fractured right leg.
These injuries could not have been identified through radiographs; only a necropsy could have shown the extent of HK’s internal injuries. Had HK recovered from the metatarsal fracture, he would still have suffered severe and long-term neurologic damage.
September 9, 2017

On Saturday, September 9, the veterinary team noted that the blood flow to HK's fractured right leg was not making any improvements, despite warm compresses and salt bath soaks, physical therapy, and laser therapy. The use of the eagle's left leg was unchanged. After the extensive morning treatments, Dr. Ernesto decided to check on the eagle again in the evening, and if there was no improvement, he would need to make a difficult decision.

In the afternoon, no improvements were seen, but the team decided to attempt one more procedure -- a fasciotomy, to relieve the tension and pressure in the leg that had lost circulation. Sadly, HK died under anesthesia.  Dr. Monica attempted CPR for several minutes, but could not revive HK.

The team is saddened that, despite an all-out effort of treatment, HK's injuries were too severe to overcome.  The veterinary team will perform a necropsy, to see what else they can learn about HK's injuries.

The veterinary team ran additional blood work on Bald Eagle HK; results indicated a high white blood cell count, which is concerning to Dr. Ernesto. On Friday, September 8, Dr. Ernesto grew even more concerned when he examined HK and found that the eagle’s right leg – the fractured leg – did not have appropriate blood flow. Dr. Ernesto removed one of the pins from the external fixation to help blood flow; he also scheduled a regimen of warm compresses to HK’s daily therapy, which also includes physical therapy and laser therapy. It’s likely that HK is spending too much time on his fractured leg due to the nerve damage in his left leg.

If HK stabilizes, Dr. Ernesto would like to explore additional diagnostic testing options to learn more about the nerve deficiency in HK’s left leg. Dr. Ernesto reached out to Virginia Tech to inquire about scheduling an EMG for HK. An EMG, or an electromyogram, measures muscle response as the nerves cells (motor neurons) are stimulated.  An EMG should offer better information about HK's injury, including whether or not the team can expect HK's nerve damage to slowly heal, or if the nerve damage is permanent. Before scheduling an appointment for an EMG, the veterinary team needs to see improvement to the blood flow in the eagle’s fractured leg.

The veterinary team carefully set up a sling for HK in his indoor enclosure; hopefully if the bird spends more time off of his feet, improvements will be seen. Throughout all of the traumatic injuries and treatments, HK is still eating on his own, which is encouraging. The staff will monitor the eagle closely during the next two days. 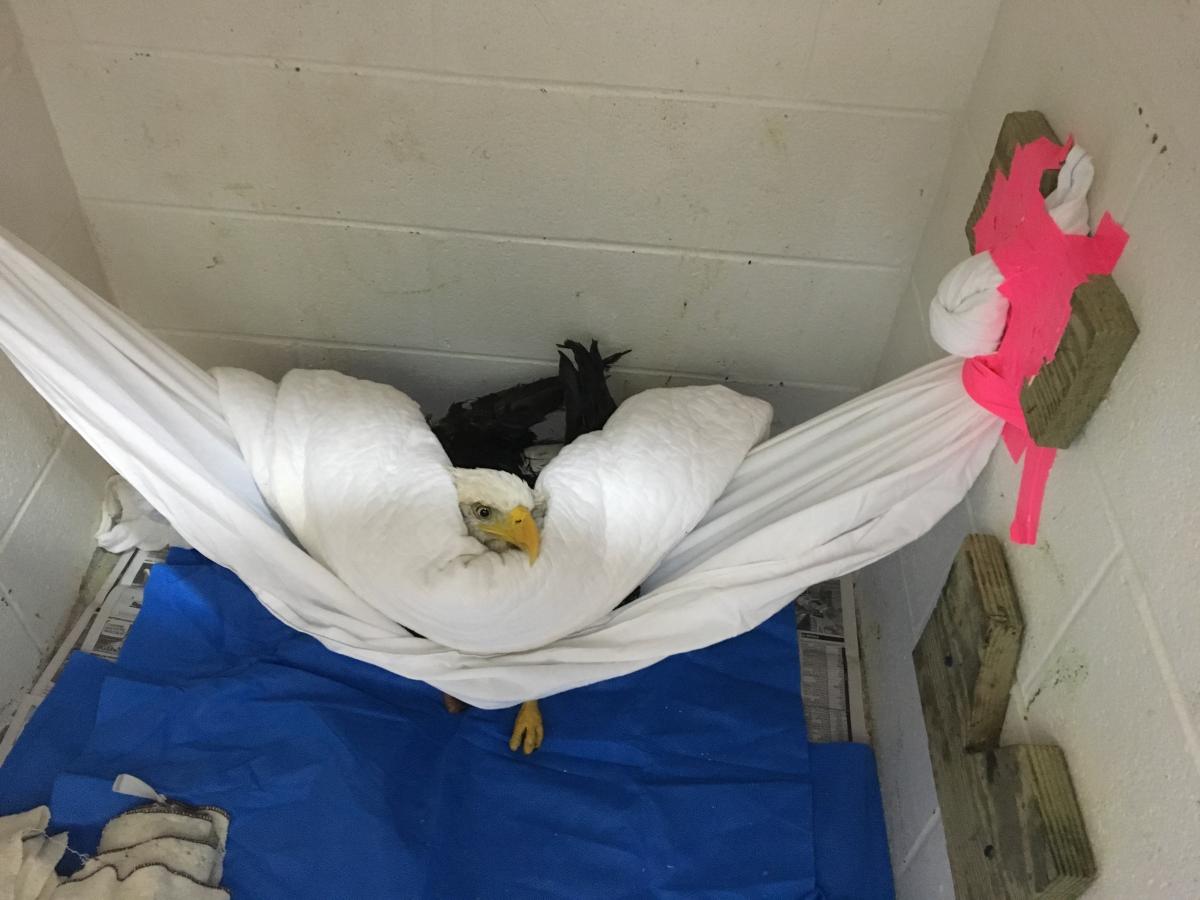 The morning after Bald Eagle HK’s surgery, Dr. Ernesto noted that the eagle was able to bear weight on his injured right leg, indicating that the external fixator was able to offer support to the eagle; however, HK was not bearing weight on his left leg. When HK is quietly resting in his enclosure, he often lies down with his wings spread out for balance.

Additional radiographs, as well as a review of the initial radiographs, didn’t show any obvious left leg or spinal injuries. On Thursday, Dr. Ernesto performed another examination of the eagle; results suggest that there is likely nerve damage to the left leg. The eagle is reactive when the upper part of his leg is manipulated but is not reacting when Dr. Ernesto manipulates the lower part of the leg and the foot. It’s unknown if injury occurred when HK was struck by a vehicle, or is due to how the eagle has been compensating for the fractured leg. 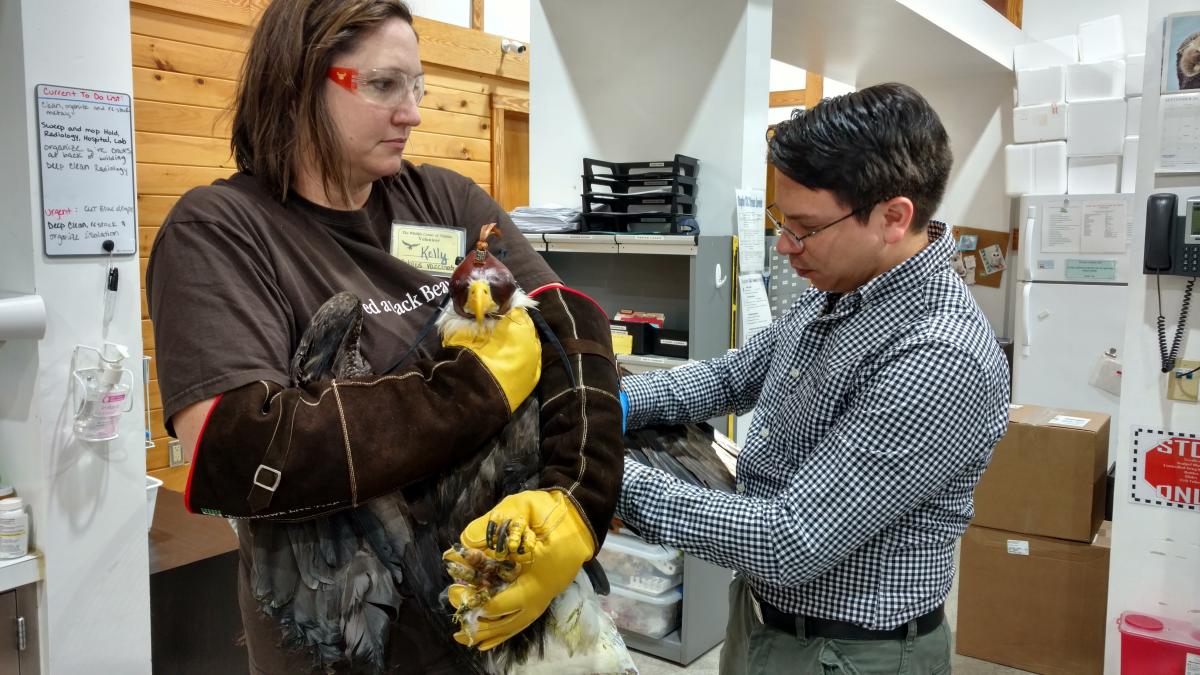 The team is performing daily physical therapy on both of HK’s legs, and will continue to offer anti-inflammatories and pain meds.

On the morning of September 5, Dr. Ernesto and licensed veterinary technician Leigh-Ann took Bald Eagle HK to surgery. Critter Cam viewers were able to watch the events on cam!

Leigh-Ann anesthetized the eagle and both she and Dr. Ernesto prepared the surgical site – plucking feathers all along HK’s injured leg. The bird received pain medication prior to surgery, and a catheter was placed to deliver fluids during the surgery. After the bird was prepared, he was taken into the Center’s operating room for the procedure. 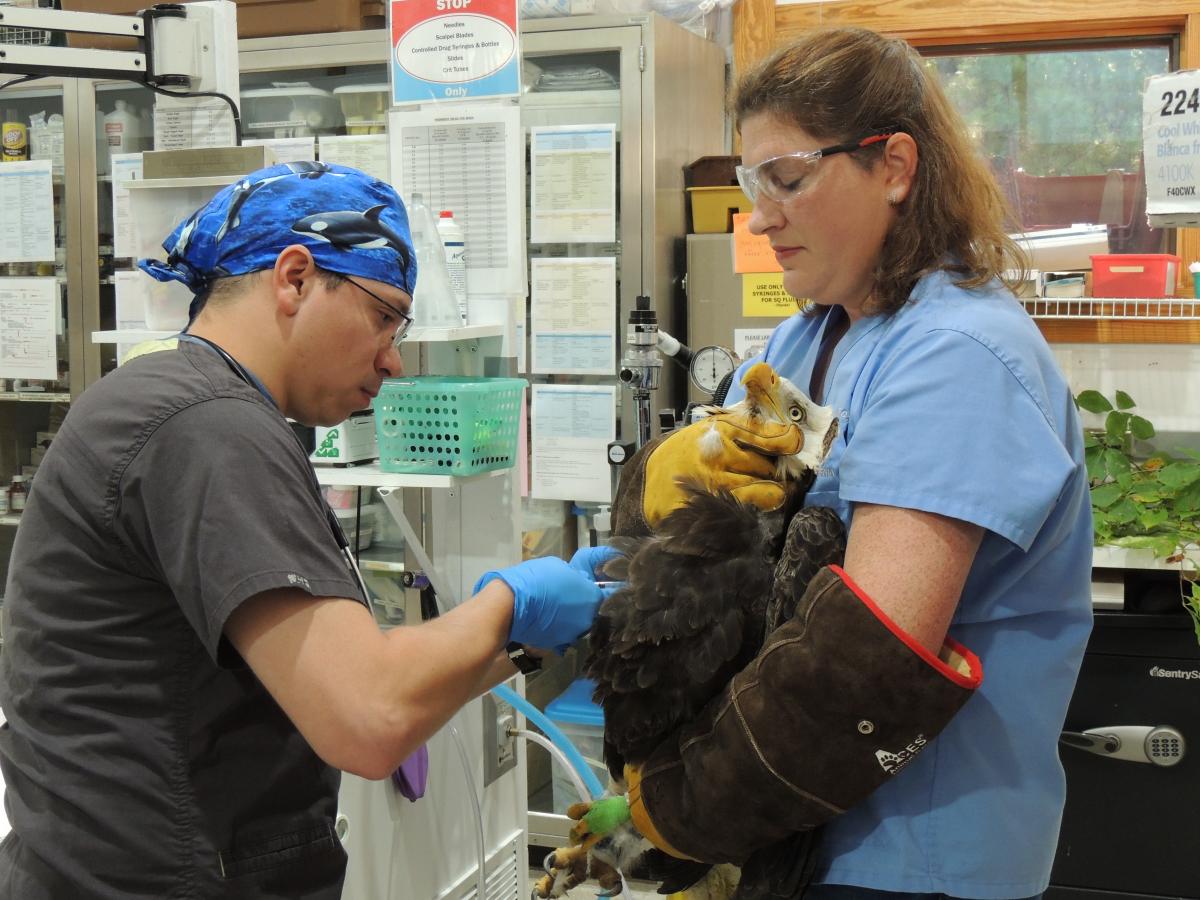 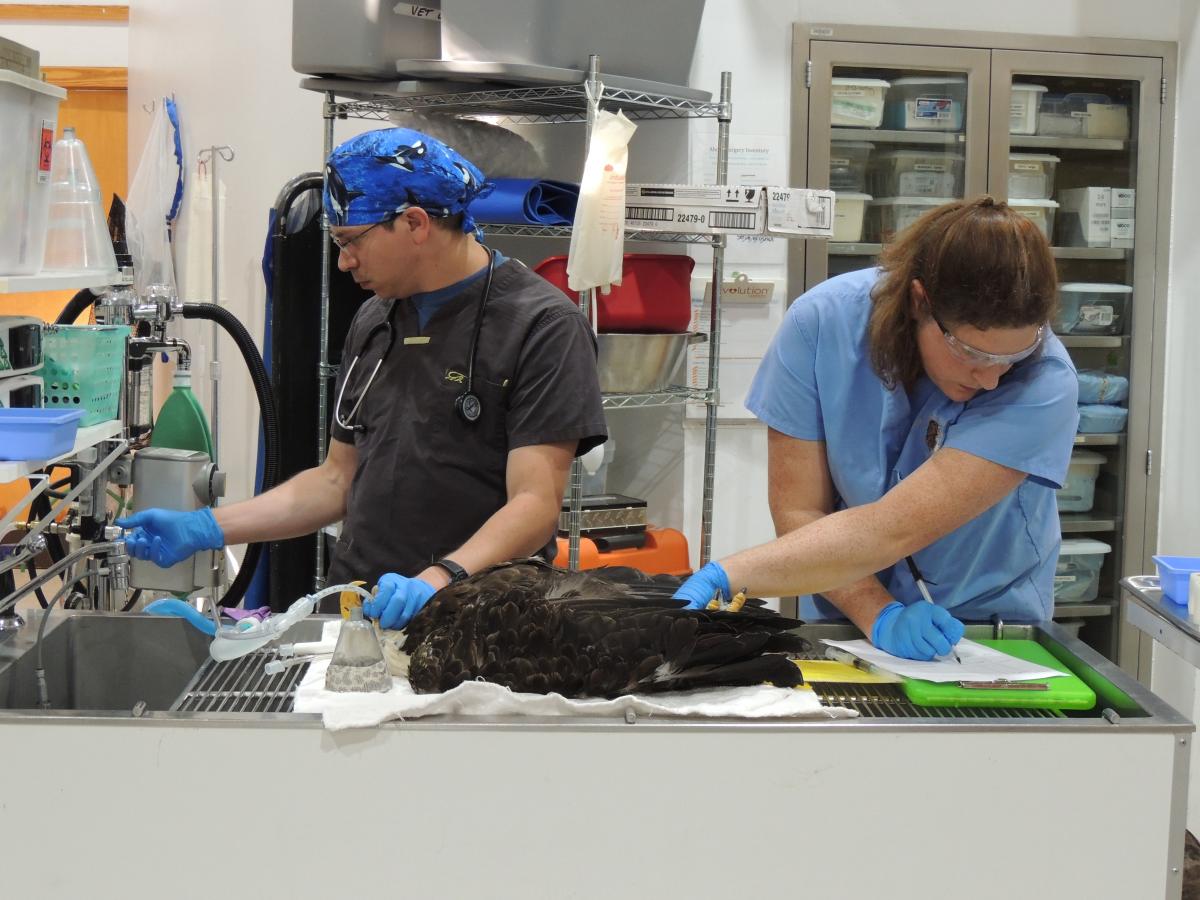 Dr. Ernesto placed five pins in HK’s leg, above and below the fracture site. After the pins were placed, two external stabilizing bars were attached to the pins on either side of the leg to offer support to the eagle as he heals. The bars were anchored in place with acrylic. Once the bars were firmly in place, each was wrapped with protective vet wrap. Dr. Ernesto was pleased with the surgery overall. 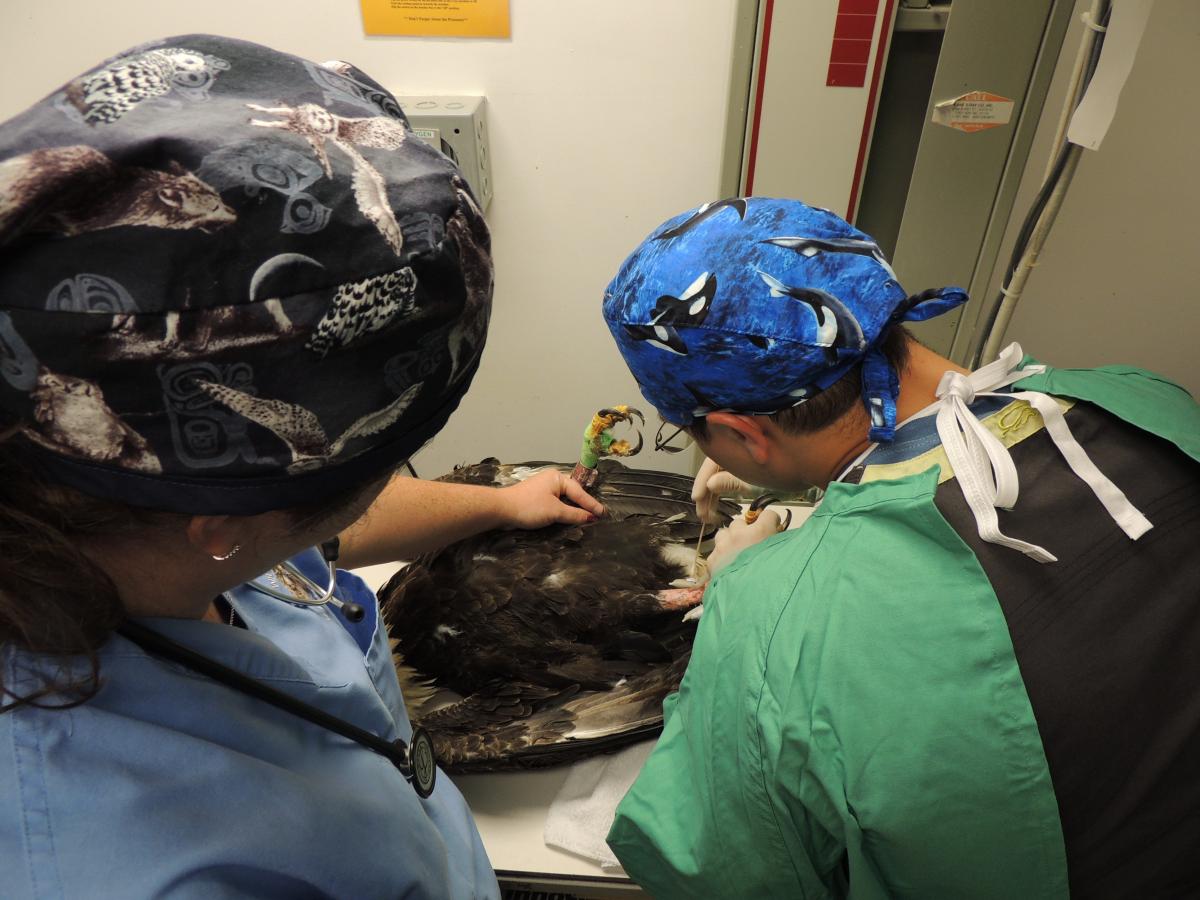 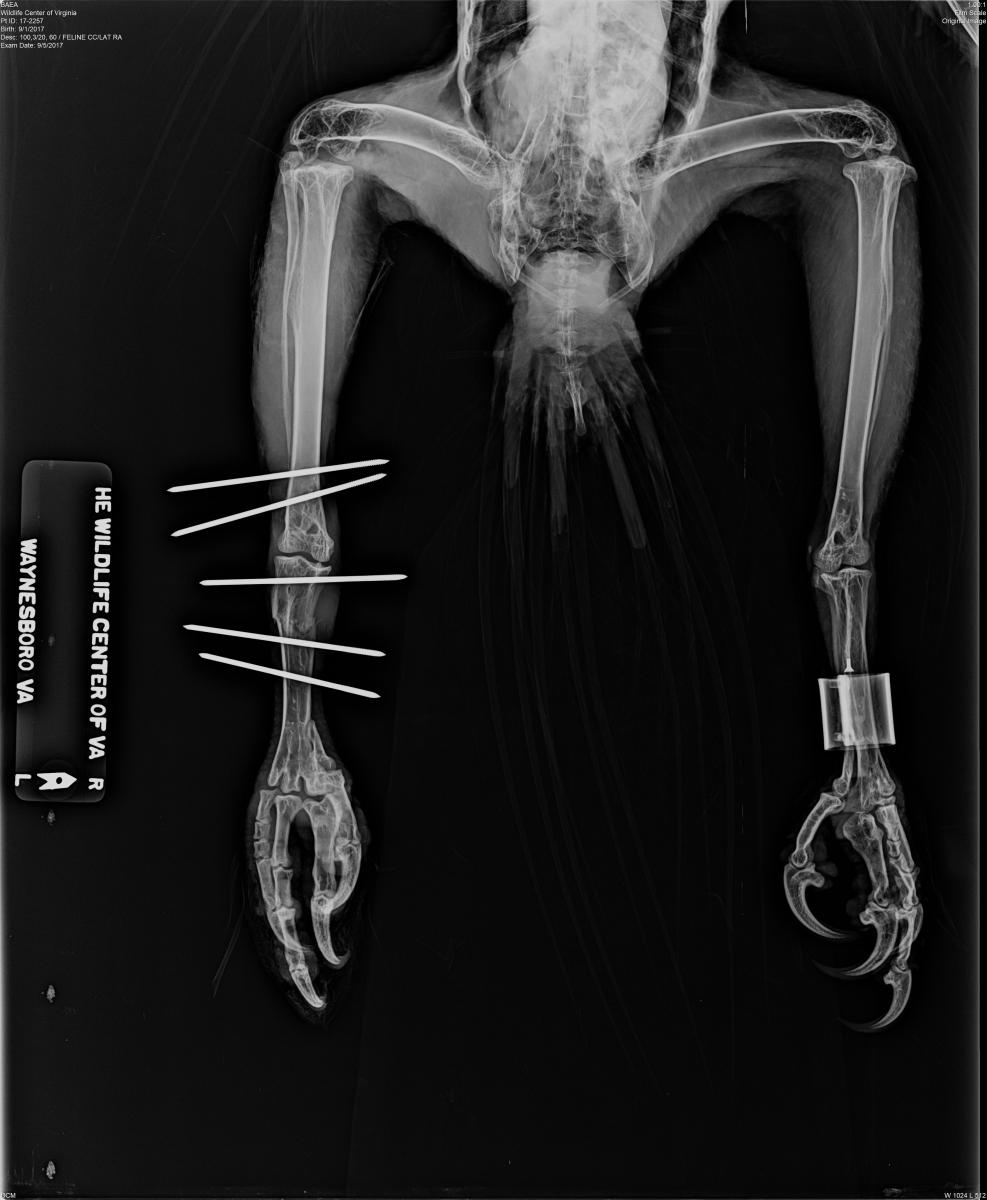 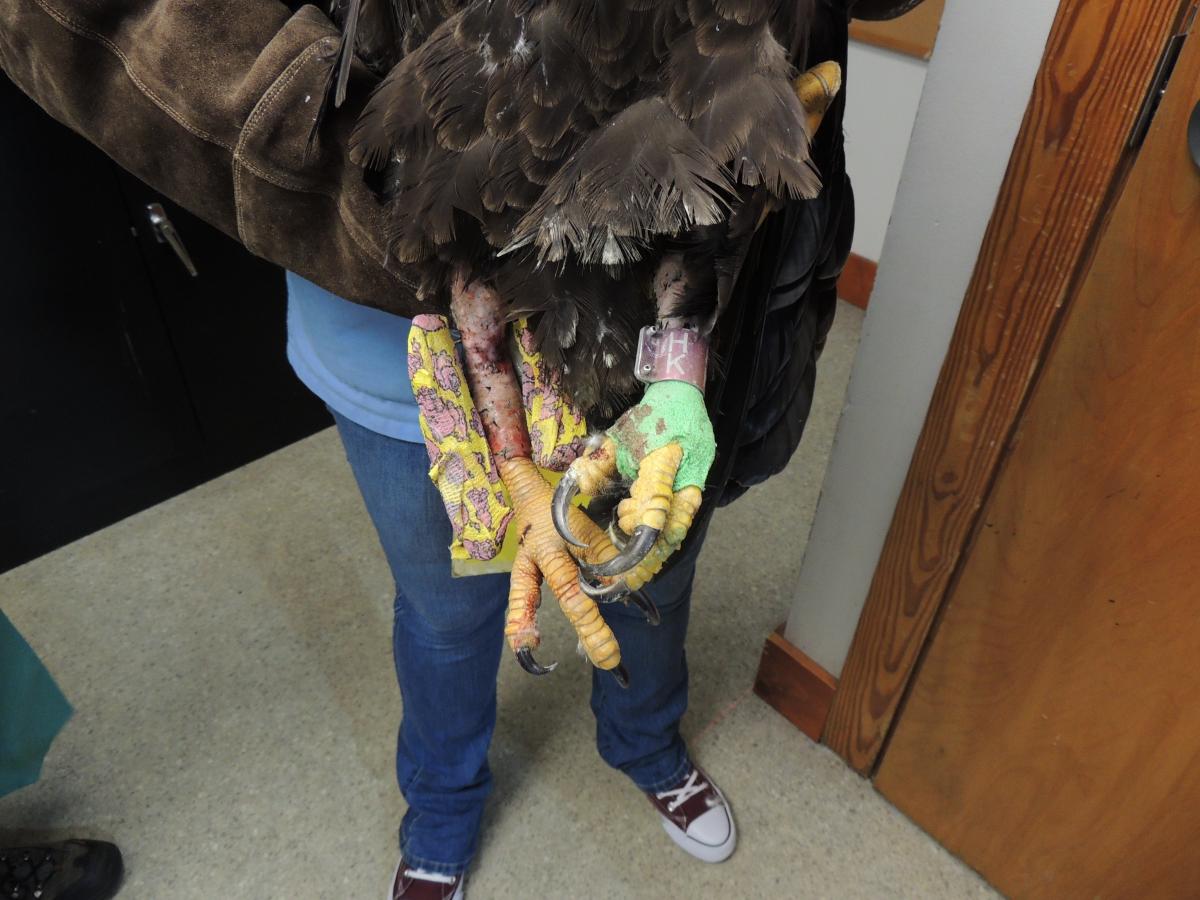 The entire fixation will stay in place for at least two weeks; then radiographs will be taken. If all is healing well, a “dynamic destabilization” will take place, which means that portions of the apparatus will be removed slowly. If all goes well, it will take about five weeks for HK’s leg to heal entirely. After the leg is fully healed, the bird will be moved to an outside enclosure and then will need to be re-conditioned in a large flight pen.

A video of the surgery, edited by Congowings:

Bald Eagle HK remained bright and alert throughout the weekend, and ate on his own Saturday evening and Sunday! The leg bandage has remained clean and dry, and there is evidence of minor swelling of the injured leg and foot, which is to be expected.

Dr. Ernesto, the Center’s Hospital Director, has been reviewing the radiographs and planning Tuesday’s surgery. He’ll be applying an external fixation to the fractured metatarsus; while many avian fractures can be pinned with an intramedullary [IM] pin, the metatarsus can’t be repaired using that technique, as the hock or metatarsus-phalanx joint would be damaged. Instead, pins will be inserted through both sides of the eagle’s leg, both above and below the fracture. An external fixation pin will then be held in place by the pins in the eagle’s leg, which will offer stability and support during the healing period. Dr. Ernesto will decide on his final configuration of the fixation on Tuesday. 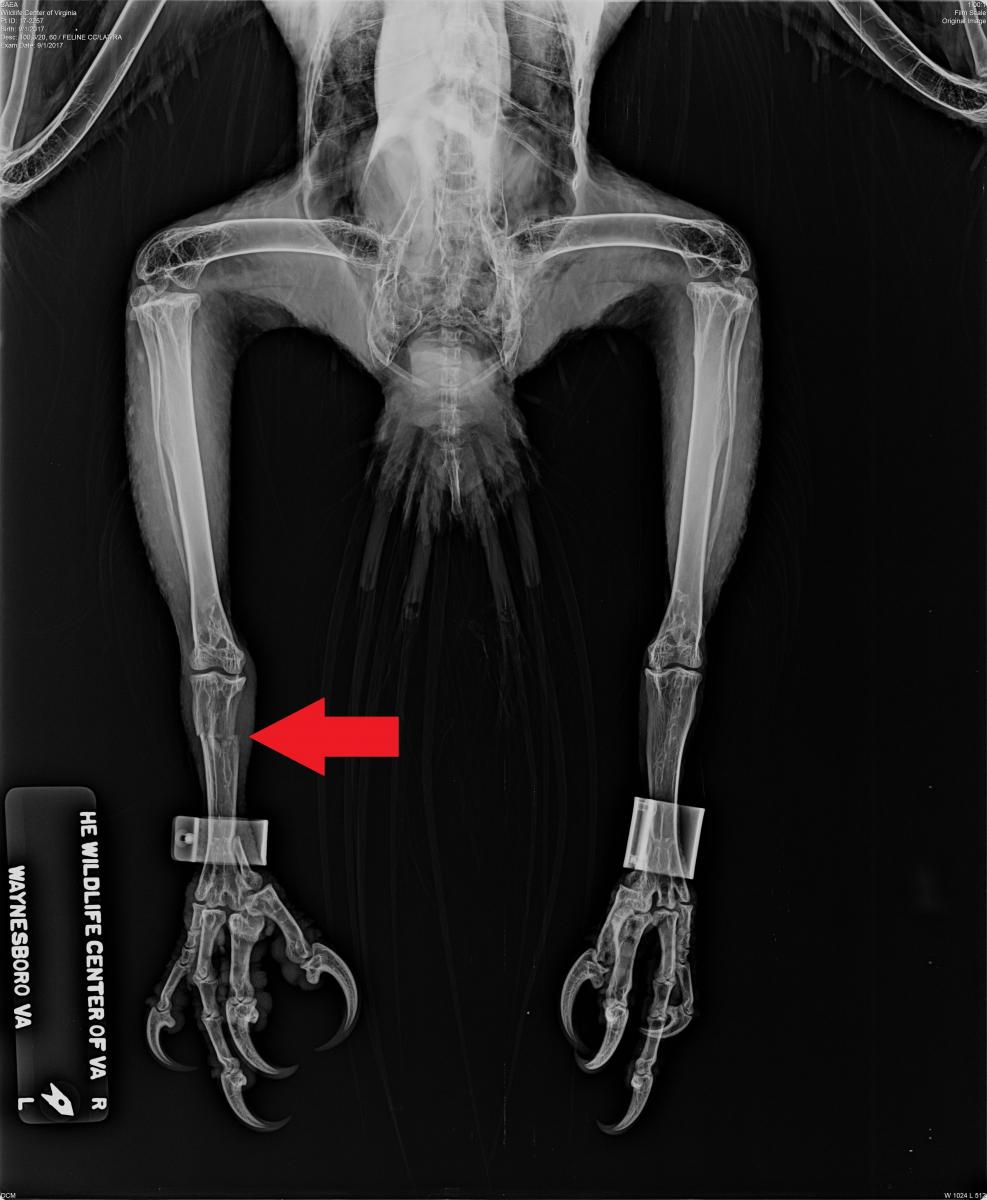 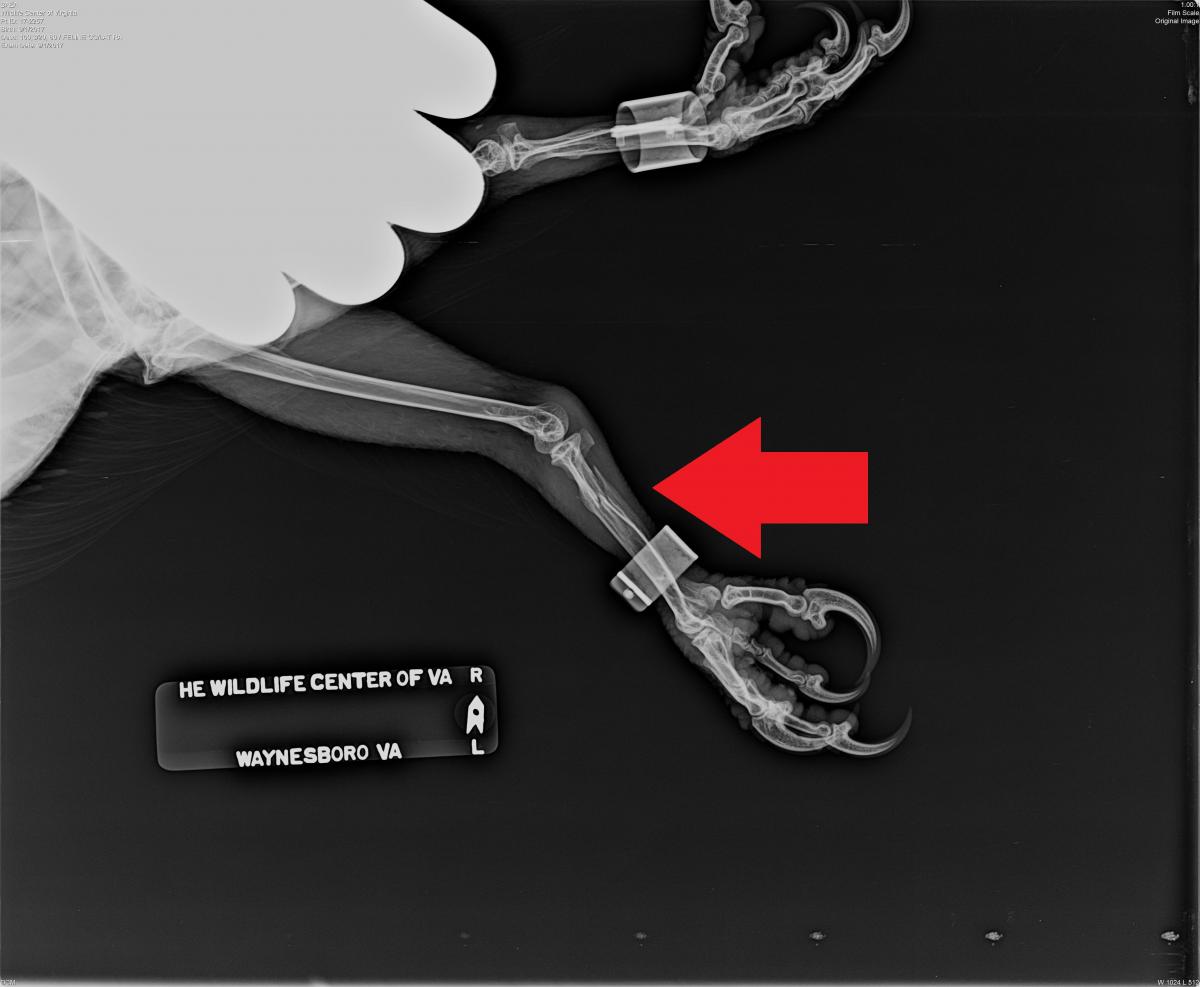 On Friday evening, prior to settling HK into a crate for the night, Dr. Monica, one of the Center’s veterinary interns, carefully crafted a splint for the eagle's broken leg using tongue depressors. She then applied a “Robert Jones bandage”, which is used to offer support to the eagle if he attempts to stand on the broken leg. 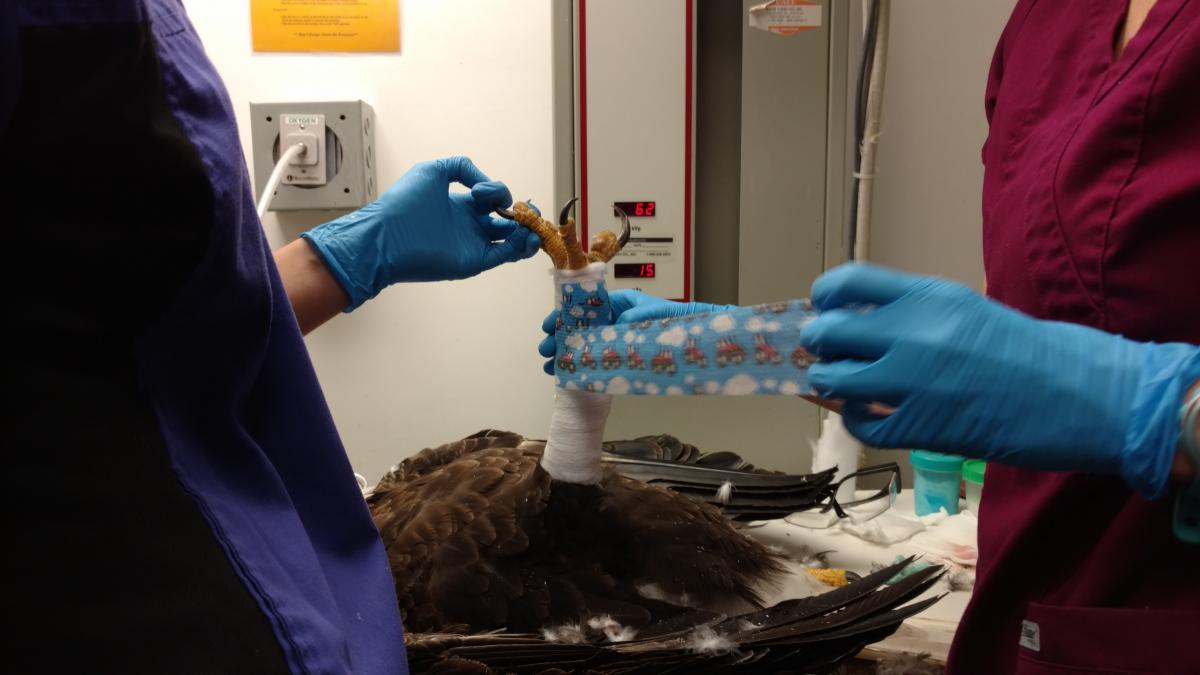 On Saturday, Dr. Monica reported, “BAEA 17-2257 is doing well this morning. He didn’t eat anything overnight, and if he continues not to eat, we’ll hand feed him. The bandage is still in place and the eagle is BAR [bright, alert, and reactive]! There is some dried blood in his mouth, but it looks much better compared to intake. He was sternal [laying on his chest] when we went to pick him up for treatments, but when we put him back, he stood (though awkwardly).”

The staff will continue to monitor, medicate, and feed HK throughout the weekend.